According to a report from Purdue and CME Group, the Ag Economy Barometer plummeted in March, dipping 47 points (28%) from a month earlier to a reading of 121. The point drop was the largest one-month fall in the life of the index, which dates to October 2015. Declines in agricultural commodity prices and concerns about the coronavirus crisis impact on the U.S. economy and agricultural sector weighed heavily on farmer sentiment in March. This month’s decline in the barometer erased the sentiment improvement that took place this past fall and winter and leaves the index unchanged from its September 2019 reading. The Ag Economy Barometer is generated each month from 400 U.S. agricultural producers’ survey responses. This month’s survey was conducted from March 16-20, 2020 as the coronavirus crisis escalated in the U.S. and around the world. 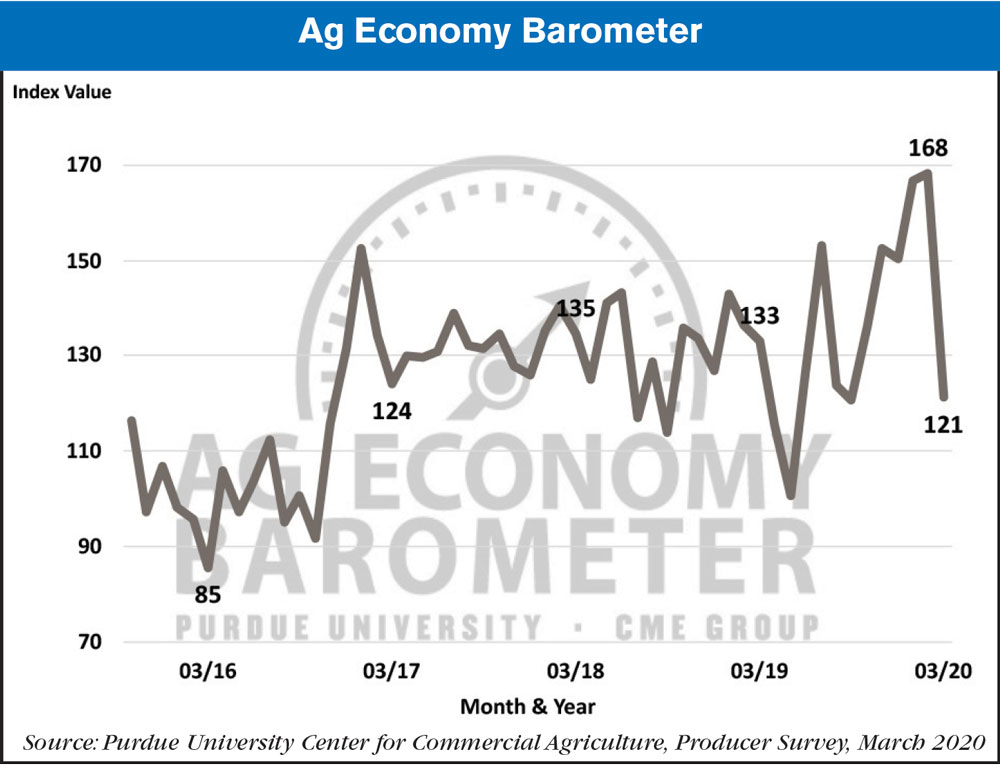 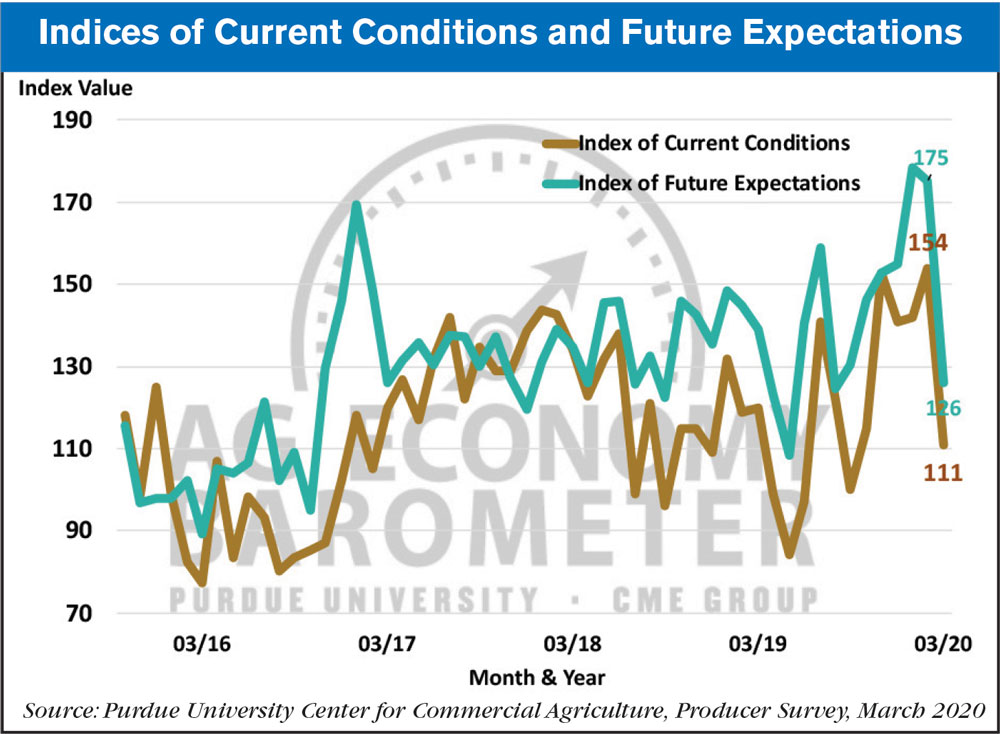 Farmers also became less optimistic in March about the outcome of the trade dispute with China. The percentage of farmers expecting the soybean trade dispute with China to be resolved soon, which peaked in January at 69 percent, fell to 47 percent. This was the second month in a row that expectations for a quick resolution to the trade dispute declined. At the same time, the percentage of producers who expect the trade dispute to be resolved in a way that’s ultimately beneficial to U.S. agriculture declined to 68 percent from an average of just over 80 percent who felt that way in January and February. In another sign that farmers were less confident that the trade dispute with China will be resolved soon, more farmers in the March survey said they expect to receive an MFP payment on their 2020 crop production than did a month earlier. In March, 62 percent of survey respondents said they anticipate USDA providing MFP payments to U.S. farmers for the 2020 crop year. That was a significant increase compared to a month earlier when just 45 percent of farmers said they expected to receive an MFP payment this year. 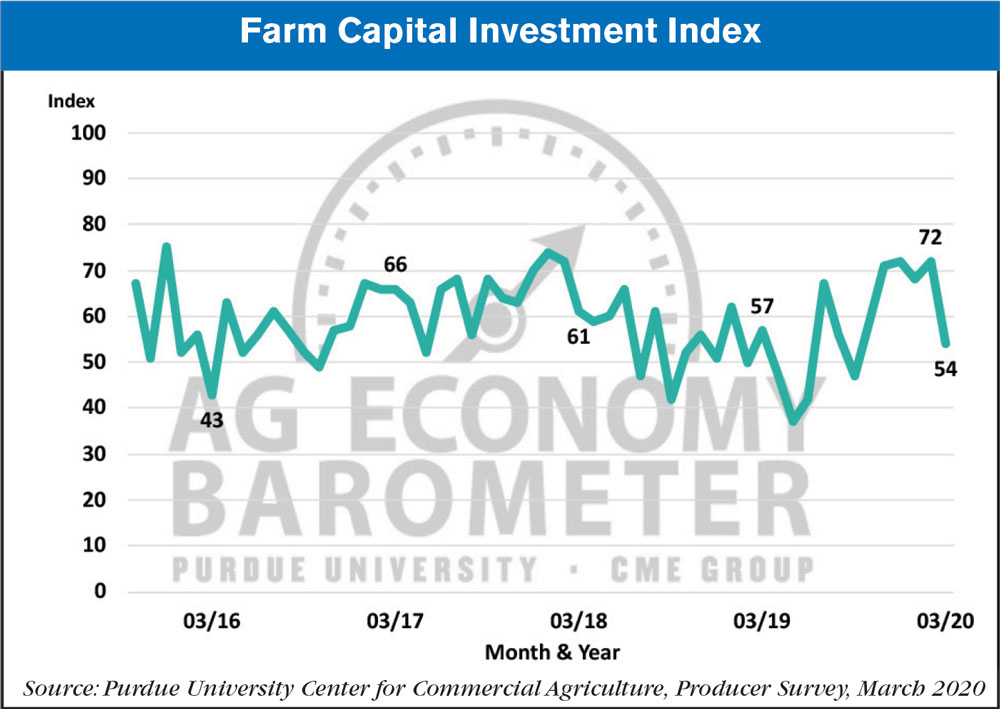 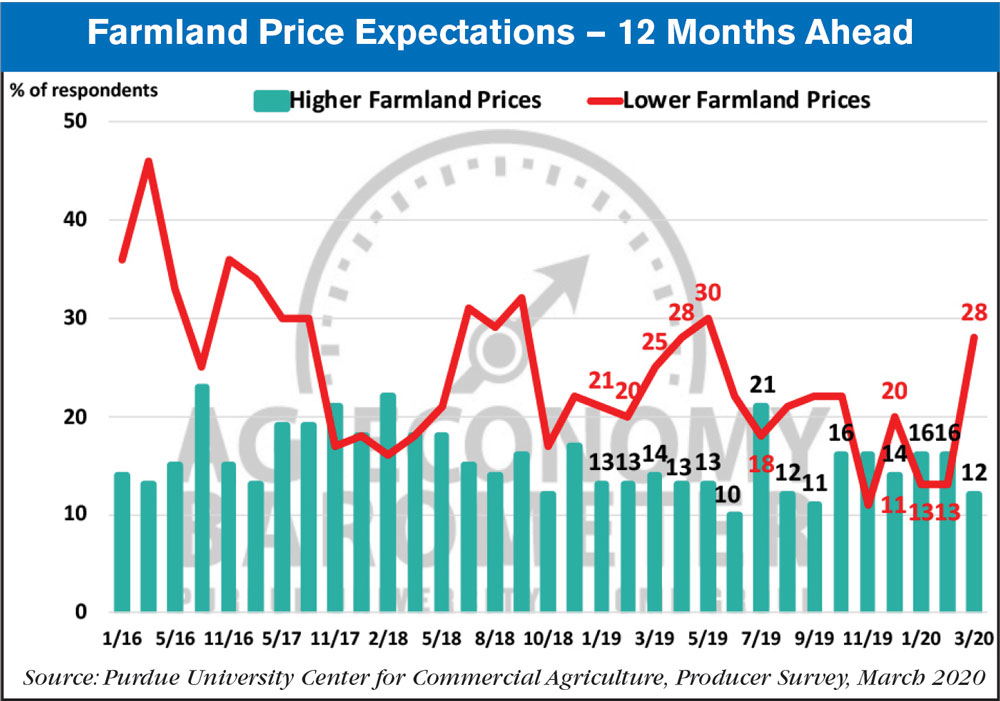 Farmer sentiment plummeted during March as the coronavirus crisis spread around the globe. The Ag Economy Barometer declined 47 points from February to March, which was the largest one-month decline in the life of the index. The Index of Current Conditions and the Index of Future Expectations also declined sharply during March as farmers expressed concerns about both their current and future situations. Nearly three-fourths of farmers participating in the March Ag Economy Barometer survey said they were either “fairly worried” or “very worried” about the coronavirus’ impact on the farms’ profitability this year. The percentage of farmers expecting good times in agriculture in the upcoming 12 months fell from 50 percent in February to just 19 percent in March and the percentage of farmers expecting their farms’ profitability to decline this year compared to last year increased to 40 percent in March from 30 percent back in December. The weakened outlook made farmers less optimistic about investing in their farming operations as the Farm Capital Investment Index fell 18 points to a reading of 54, its lowest reading since last May. Farmers’ perspective on farmland values also deteriorated as the percentage expecting farmland values to decline over the next 12 months jumped from 13 percent in February to 28 percent in March.