The latest episode of On the Record is now available! In this week’s episode we explore Deere and CNH Industrial’s push toward leased equipment, a slowdown in farm lending during the third quarter and the results of Baird and Ag Equipment Intelligence’s first survey of shortline equipment manufacturers. We also discuss the aging population of both dealers and farmers and how that’s impacting the ag industry. In the Technology Corner, Jack Zemlicka discusses a service-centric focus to precision sales.

According to an Oct. 14 report in the Wall Street Journal, it appears Deere & Co., as well as other major manufacturers of farm machinery are once again emphasizing equipment leasing to keep sales moving.

Leasing allows Deere to increase sales by delivering equipment to customers who otherwise might not be willing to buy in a down market. However, there’s a longer term risk that customer will continue to prefer leasing when the ag economy rebounds. The report goes on to say leasing offers less reliable profit and more complexity than lending customers money with interest to pay for their equipment.

And as dealers know well, the report says leases also “weigh on the used equipment market.” More than a third of the financed purchases of Deere high-horsepower tractors and construction equipment is being leased to farmers and builders, and leasing levels are about twice the rate in 2012, when the U.S. farm equipment market was booming because of high crop prices, according to the report.

According to the report, CNH Industrial also is relying more on leasing to support sales. “More than 40% of the high horsepower tractors CNH has sold annually in the U.S. since 2014 have been leased, up from 25% in 2012, according to the Uniform Commercial Code data on financed purchases, which cover most of the farm equipment sold in the U.S,” reports the Wall Street Journal. 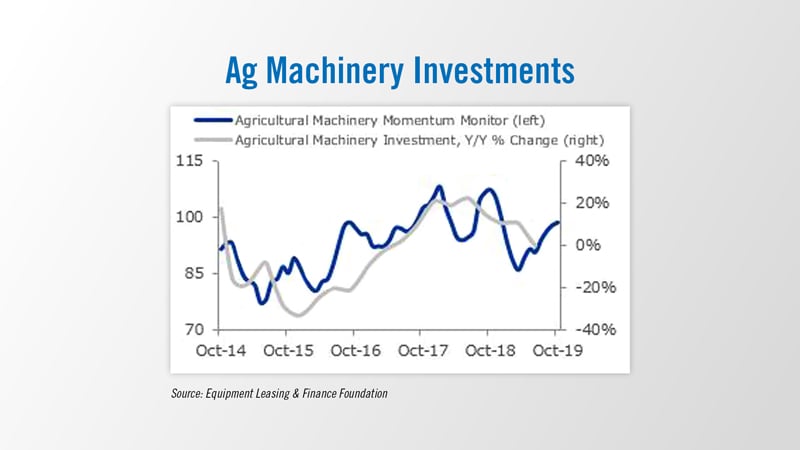 Investment in Agricultural Machinery fell 11% (annualized) in the second quarter of 2019 and eased 0.3% from one year ago. The Agriculture Momentum Index improved from 97.9 (revised) in September to 98.7 in October, the highest level since late 2018. Wholesale Trade of Miscellaneous Durable Goods improved 0.7% in July, and Shipments of Farm Machinery & Equipment rose 3.2% in August. Overall, the Index continues to point to improved agricultural machinery investment growth over the next 3-6 months.

This week’s Dealers on the Move is Cazenovia Equipment. The New York-based John Deere dealers has acquired LeBerge & Curtis of Canton, N.Y. This brings Cazenovia’s total locations to 10.

A Service-Centric Focus to Precision Sales

While strides have been made establishing precision as a standalone business, dealerships continue to seek a better balance between revenue generated by hardware sales and service.

This mindset is reflected in a continuing trend toward a more balanced breakdown of precision revenue sources in the seventh annual Precision Farming Dealer Benchmark study. However, there are few reversals in recent trends. 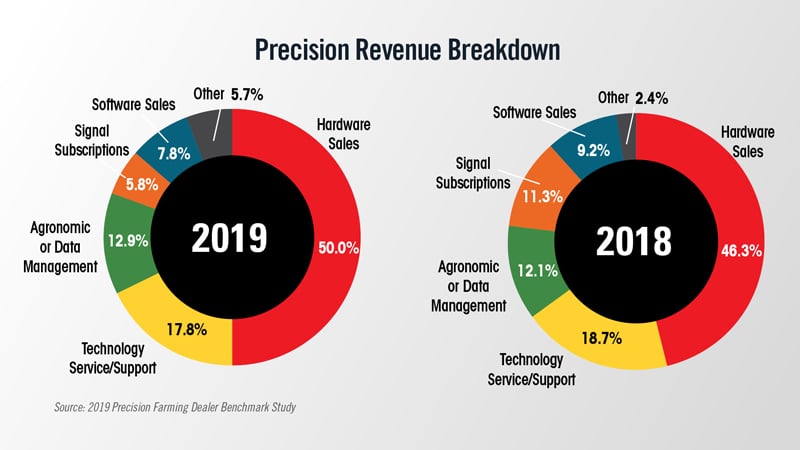 For the first time in 3 years, dealers reported that half of their precision revenue came from hardware sales, curbing a downward trend that started in 2016. The most dramatic year-over-year drop was in signal subscriptions, from a high of 11% in 2018 to a low of just under 6% this year.

The way precision products are sold saw some subtle shifts in this year’s study. Most notable was the continued 3-year downward trend of aftermarket sales of technology, to a low of about 41% in 2019.

Interestingly, 15% indicated they sell precision technology through other methods, which could include service-only sales or agronomic support.

Platte Valley Equipment, a John Deere dealer with 4 locations in eastern Nebraska, closed out the first year of its E3 precision farming service program with around 25 customers. Now in its fourth year, almost 80 farmers are enrolled — and the program’s 98% retention rate speaks to the value customers are getting out of the investment.

E3 — which stands for Enable, Engage and Educate — is unique to Platte Valley in its all-encompassing package and 24/7 dedication to its subscribers.

Cory Allely, AMS specialist, notes that a key to the success of the program is in its flexibility and reliability in meeting customer expectations.

“Some of the success stories are definitely with our service department and our uptime guarantee. Basically if a machine is inspected by us and it goes down, in-season and we can’t get it fixed within 24 hours, we’re getting the customer a loaner. This gets them back up and running in a timely manner. That aspect, to some customers, is huge, especially if they have a lot of ground to cover and weather is always unpredictable.”

Allely adds that future growth of the dealership’s E3 program will rely on expansion of connected support and the ability to anticipate breakdowns before they occur.

The Federal Reserve Bank of Kansas City reported growth in farm lending activity slowed in the third quarter of 2019 following 9 consecutive quarters of year-over-year growth. A decrease in the volume of farm operating loans drove the slowdown in non-real estate lending. Following sharp increases in 2018, loans used to finance current operating expenses declined in the third quarter, returning to the prior 20 year average. Feeder livestock and farm machinery loans also were lower and made up the remaining share of the decline in non-real estate lending, while loans for other livestock increased. 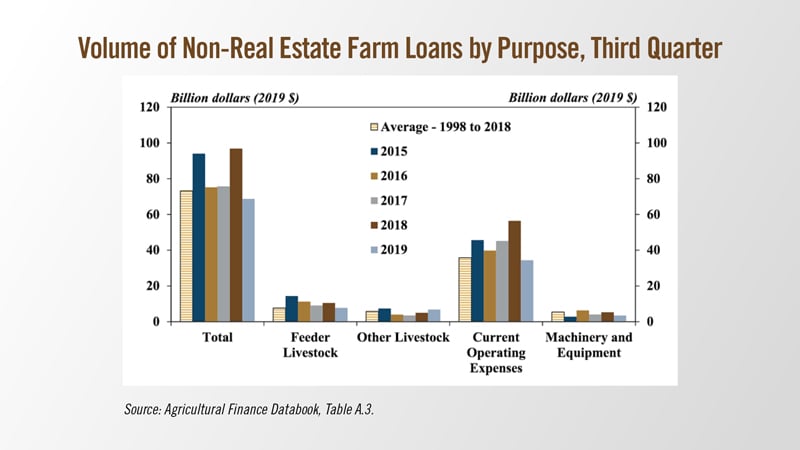 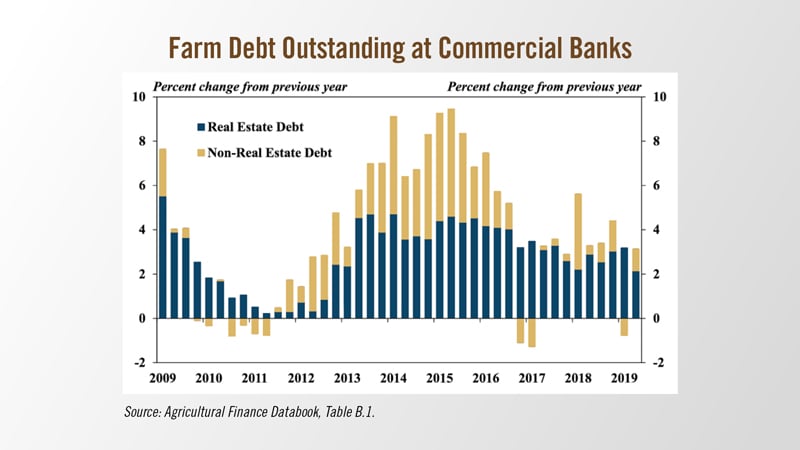 Farm sector debt continued to increase as liquidity in the sector has remained low. Debt-to-income ratios have declined slightly from historically high levels in 2016. However, in the third quarter, outstanding debt in the farm sector was more than twice as large as farm income and remained above a historical average (Chart 6). Although the USDA forecasted a slight increase in farm income in 2019, liquidity could remain weak, due, in part, to continued growth in farm debt, according to the Kansas City Fed economists.

Shortline manufacturers remain confident about the near future in the ag equipment industry in spite of a tough third quarter, according to a new survey from Ag Equipment Intelligence and investment bank RW Baird. Despite being a fragmented portion of the market and being generally made up of small businesses, survey’s respondents totaled $500 million in combined revenue, painting a clear picture of where this small but important market is headed.

A majority of shortline manufacturers, otherwise known as specialty equipment manufacturers, saw their businesses slow and revenue fall below expectations over the last 3 months. However, a majority of respondents forecast steady demand for their products over the next 6 months, leaving room for some optimism between modest business declines. 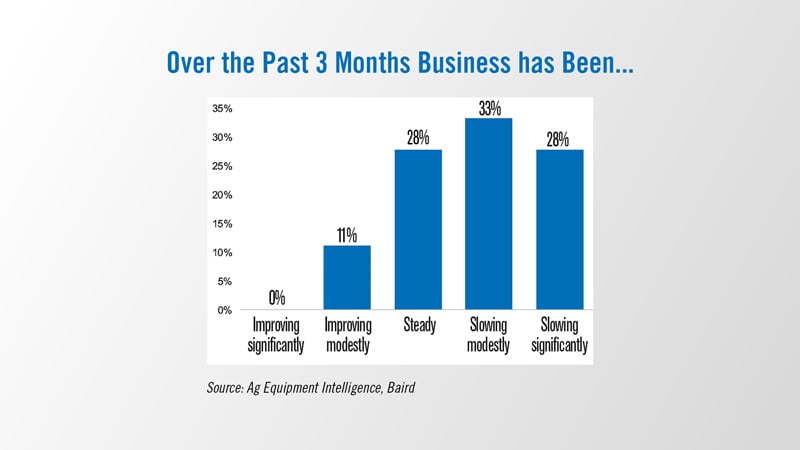 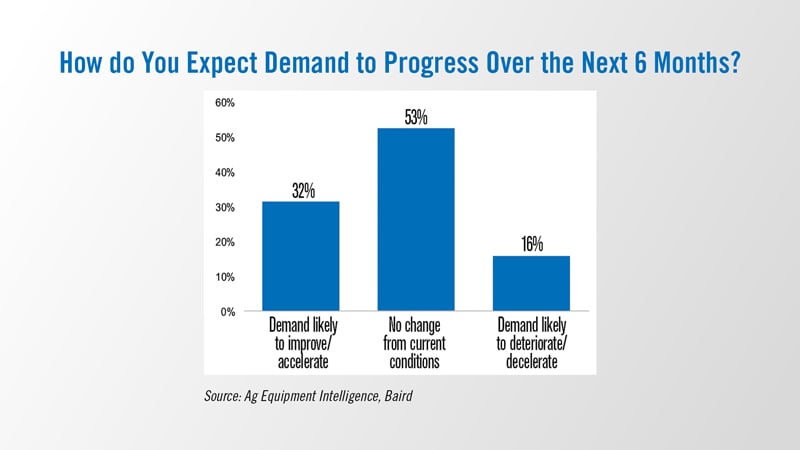 At 85%, a strong majority of shortline manufacturers forecast flat or positive demand over the next half year. Specifically, nearly one third (32%) of those surveyed expect improvements over the next 6 months, while 16% expect demand to deteriorate and 53% anticipate no change from current conditions.

The agriculture industry is starting to show its age, whether its farm equipment dealers or farmers, themselves.

According to surveys Ag Equipment Intelligence conducted 5 years apart, the first one in 2014 and the second earlier this year, the number of dealer-principals 61 years of age and older has grown from 38% to 45%. The aging of dealership owners is helping to fuel industry consolidation. 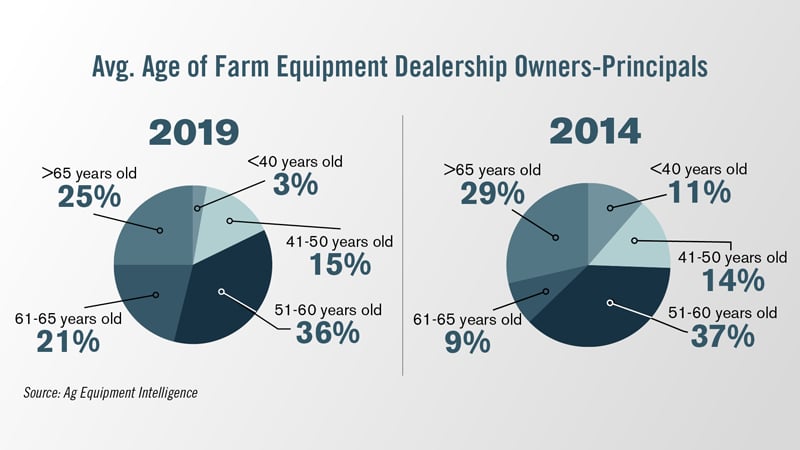 In many cases, dealers who are ready retire and have no succession plan seek out other dealerships as potential buyers. The aging of these dealer-principals and their desire to call it a career continues to be a significant driver of industry consolidation.

Similar trends can be seen with farmers.

In his Oct. 18 column in Illinois AgriNews, Alan Guebert reports that the aging of Baby Boomer farmers is also changing the landscape of American agriculture. He says the American Farmland Trust, a non-partisan farmland conservation group based in Washington D.C., estimates the turnover of farmland to reach 371 million acres in the next 15 years. That is 4 of every 10 acres in private ownership today.

He goes on to say that farmers growing older is driving the trend. While the average age of all U.S. farmers is currently 57.5 years, it is accelerating by more than one year every 5 years.

Current market conditions may speed up the turnover as older growers throw in the towel and call it a career.

Thanks Dave. And now from the Implement & Tractor Archives…

In 1986, the Ford Motor Co. had acquired Sperry-New Holland and called the new company Ford-New Holland. Fiat then acquired Ford-New Holland in 1991 and named the merged company N.H. Geotech. In 1993, N.H. Geotech changed its name to New Holland. This 1995 model F140 kept the Fiatagri name in Europe, even though by this point the company name was New Holland, with headquarters in Turin, Italy. New Holland’s roots are deep and diverse, stemming from companies like Braud, a French company founded in 1870, Laverda , an American company started in 1895 and Ford, the American company founded by Henry Ford in Detroit in 1903. 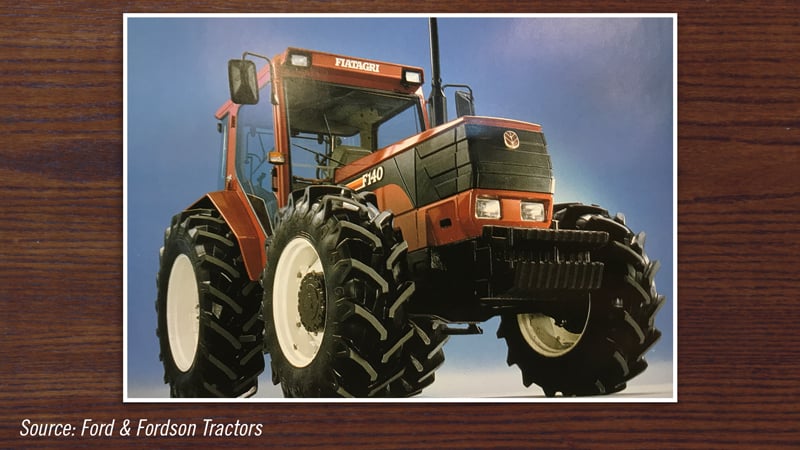 As always we welcome your feedback. You can send comments and story suggestions to kschmidt@lessitermedia.com. Until next time, thanks for joining