The latest episode of On the Record is now available! In this week’s episode we discuss Titan Machinery’s renewed focus on acquisitions in the U.S., one annalist’s take on how Blue River Technology could redefine farmer input costs, a double-digit drop in farmer sentiment and mixed results in large ag equipment sales during May. In the Technology Corner, we take a look at how dealers are shifting the way they bill service support.

During a conference call with analysts following release of the quarterly report, David Meyer, Titan Machinery’s chairman and CEO, pointed to the retirement of the remaining principal balance of the original $150 million senior convertible note as setting the stage to explore new acquisitions. 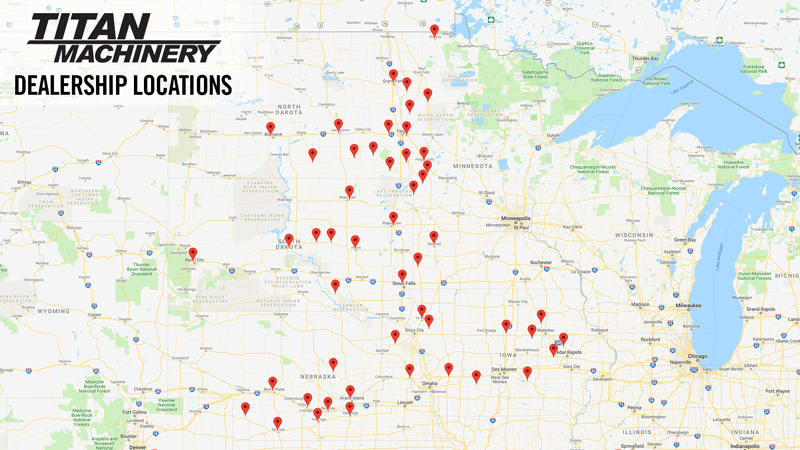 Mark Kalvoda, Titan’s CFO said, “Getting that convert behind us is big and critical. We believe there’s a lot of opportunity, particularly on the domestic ag side, and the length of this trough cycle that we have been in. There are good opportunities to go out and get some good quality acquisitions done on the ag side.” He adds, that Titan is focused on that and acquisitions are a top priority in regard to capital allocation.

Regarding acquisitions, Meyer added they like the Upper Midwest footprint Titan is in, and believes there is ample opportunities. He says, “The industry is still fairly fragmented. Dealer-principals continue to age and some dealerships have capital challenges. We definitely believe we have some good opportunities [for acquisitions] either in contiguous regions or in this same footprint that we are in today.”

This week’s Dealers on the Move are Ohio Ag Equipment, Pape Machinery and Pattison Agriculture.

Now here’s Associate Research Editor Ben Thorpe, filling in for Jack Zemlicka, with the latest from the Technology Corner.

Based on findings from the 2019 Precision Farming Dealer Survey, this year shows a four-year low for dealers offering precision service packages to farmers. However, there was a shift on how dealers are billing their support. 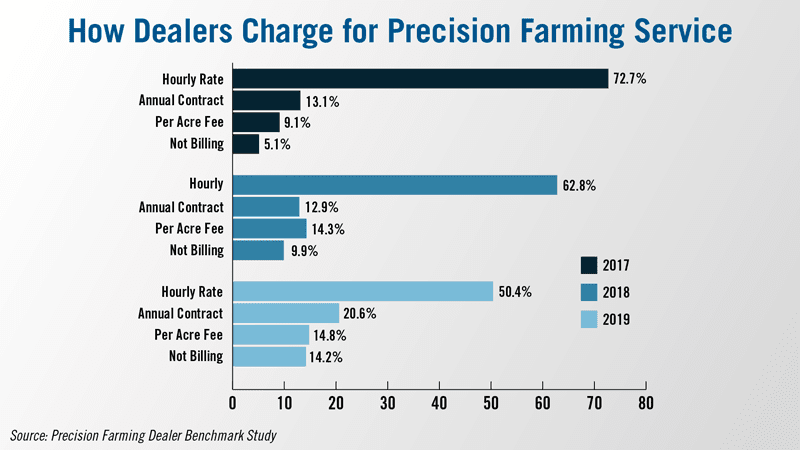 Charging by the hour remained the most popular method, but only half of respondents preferred it over other options. For example, annual contracts are on the rise as the primary method for billing precision services, from just under thirteen percent in 2018 to more than twenty percent this year.

Charging per-acre for services ranked at fourteen percent, with another fourteen percent of dealers saying they don’t bill for precision services at all, the highest number in four years. Several dealers cited gaining traction with billable service as their primary challenge heading into 2020. 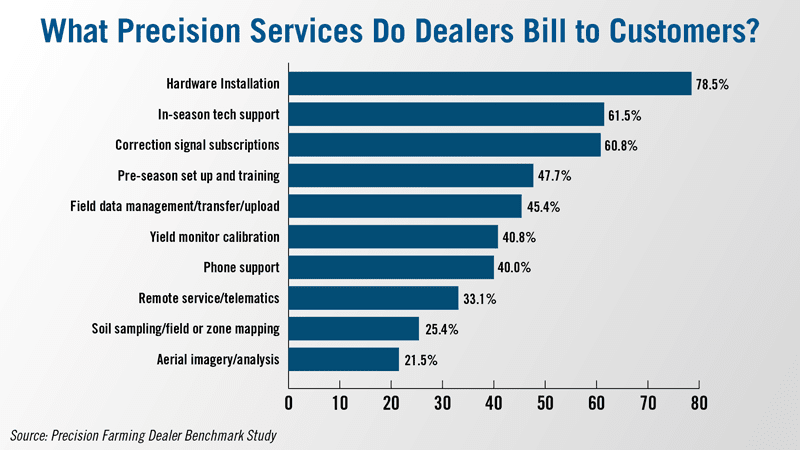 Survey results showed the most common services for dealers to bill for were hardware installation, in-season tech support, and correction signal subscriptions, with the least common being aerial imagery and analysis, seed and fertilizer recommendations, and custom application.

Dealers included that a key challenge in getting customers to invest has been demonstrating the value of a support plan. Nearly half of dealers showed a fifty-one percent success rate on year-to-year customers renewals.

Following a visit to John Deere’s new Intelligent Solutions Group (ISG) headquartered in Des Moines, Iowa, during the last week of May, Stanley Elliott, analyst with Stifel, says he sees opportunities with “Deere working to monetize its data platform as well as commercialize technologies acquired in the Blue River deal.” He adds, Blue River has potential to redefine farmer input costs and drive increased farmer budget mix toward Deere.

According to Elliott, Blue River leverages computer vision and advances in machine learning to train a neural net to recognize weeds vs. crops of a 2-3 millimeter plant. “With this, Deere expects to commercialize a product within the next couple of years that will be able to reduce herbicide spraying by 80%-plus by targeting spray directly at weeds as opposed to spraying an entire crop. Further advancements could also direct fertilizer at only crops (and not weeds). Together, these technologies could significantly reduce the reliance on seeds with numerous traits, or at least in theory, eliminate the need for seed traits entirely,” says Elliott.

He points out that herbicide, fertilizer and seeds together account for 50-70% of a farmer's variable costs while machinery depreciation and maintenance only accounts for about 10%. Elliott says, “Over time, we see potential for farmers to dramatically decrease the mix of input costs from herbicide, fertilizer and seed by leveraging products developed using Blue River’s AI technology while at the same time dramatically increasing input cost mix on machinery depreciation, maintenance and software.” 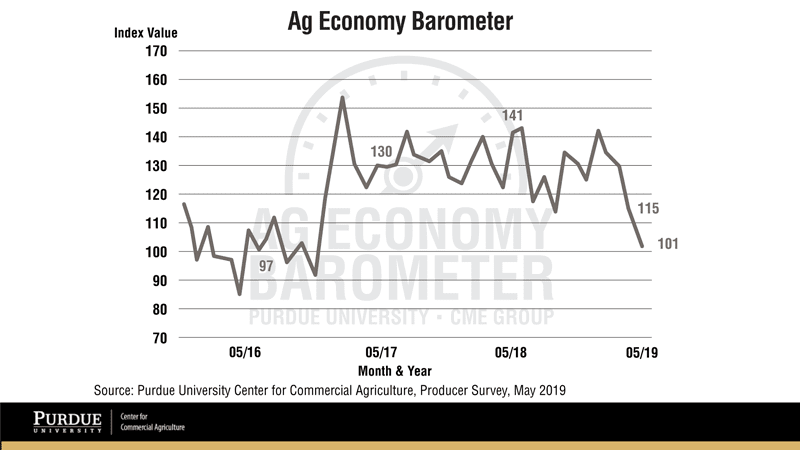 The Ag Economy Barometer, which measures producer sentiment based upon a mid-month survey of 400 U.S. ag producers, dropped again in May to 101. That is 14 points lower than April’s reading and the lowest reading since October 2016. The Barometer is managed by Purdue University’s Center for Commercial Agriculture. 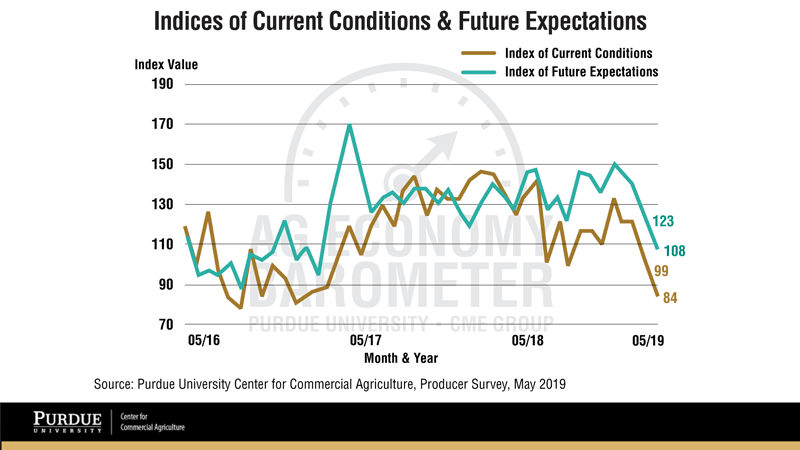 Purdue’s James Mintert and Michael Langemeier say “this month’s declines in the barometer and in its two sub-indices effectively erased all of the large improvement in farmer sentiment that took place following the November 2016 election.”

The survey also asks producers about making large investments in their farming operations, including machinery purchases. This is measured by the Large Farm Investment Index. In May, it dropped by 11 points to 37. This is the lowest value since data collection began in fall 2015. 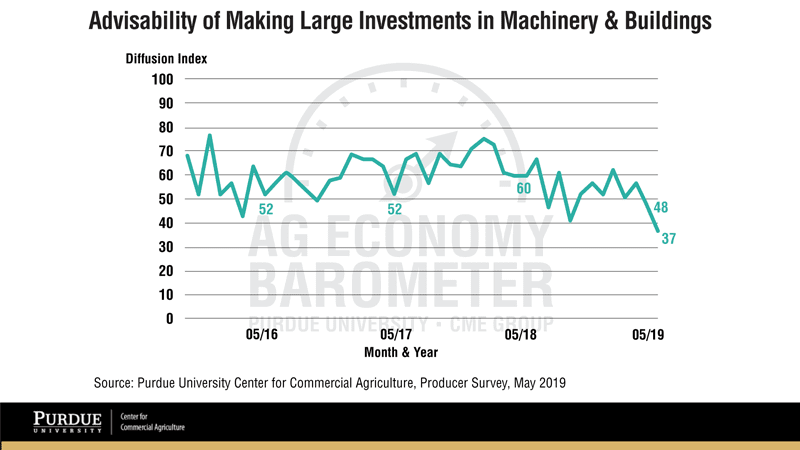 This latest survey was conducted in mid-May, in the midst of a wet spring planting season, but prior to USDA’s announcement that a second round of trade dispute payments would be made to U.S. crop producers in 2019. Since the survey was conducted, corn prices have improved. The July 2019 contract closed at $4.27, which was up 71 cents from the April close, which could have a positive impact on farmer sentiment and potential equipment purchases.

As the trade wars continue to wage in U.S., farm equipment sales numbers mirror the uncertainty within the industry. U.S. sales saw minimal growth in most categories while Canada dropped in all but two, according to the latest Assn. of Equipment Manufacturers’ sales data. 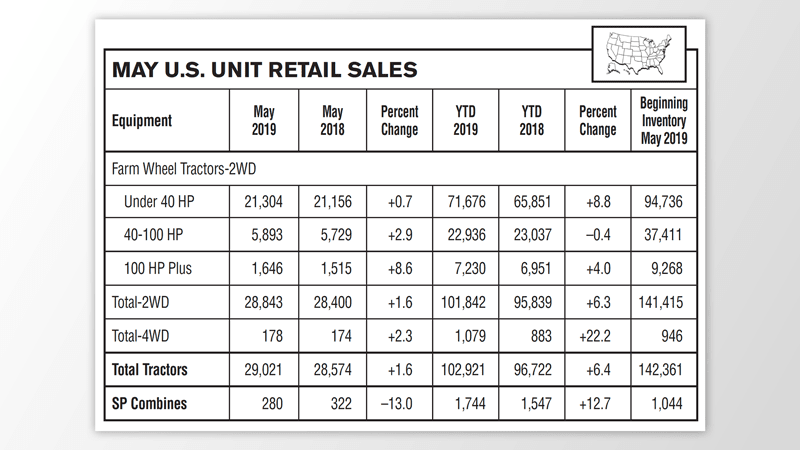 Total 4WD tractor sales increased by 1.6% compared to May of 2018 and 6.3% for year-to-date sales from 2018. Overall, total farm tractor sales experienced 1.6% growth, which is largely overshadowed by the 13% drop in sales for combines. 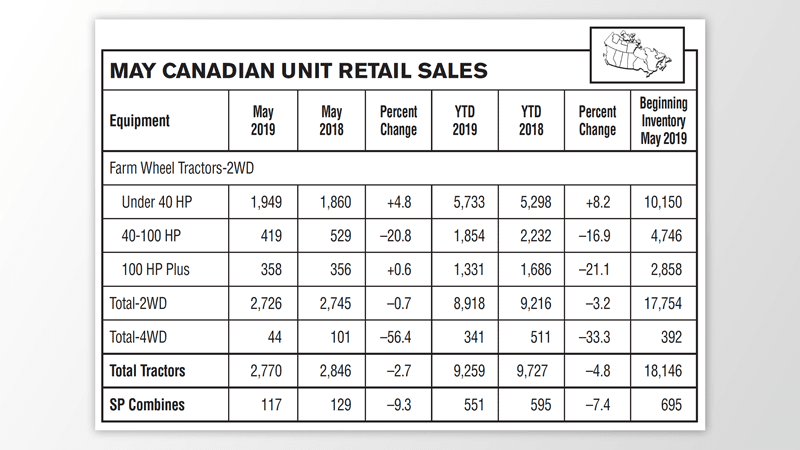 While U.S. numbers may have seen slight increases, Canada saw major decreases. Sales of under 40 horsepower and 100+ horsepower 2WD tractors were the only categories that experienced growth for Canada. The rest of the categories declined in sales with some seeing drop-offs as bad as 20.8% for 40-100 horsepower tractors and 56.4% for total 4WD tractors.

Charlie Glass, chairman emeritus of the Farm Equipment Manufacturers Assn. and contributor for Ag Equipment Intelligence, says “The agricultural economy can only be described as bleak at this time and the sentiment among U.S. farmers continued to match that outlook. At the same time sentiments remained positive about the long range future of the industry.”

In 1933, both International Harvester and Deere & Co. offered price guaranty plans, similar to plans in place for 1932. However, the 1933 price guarantee plans extended over their entire farm machinery lines. 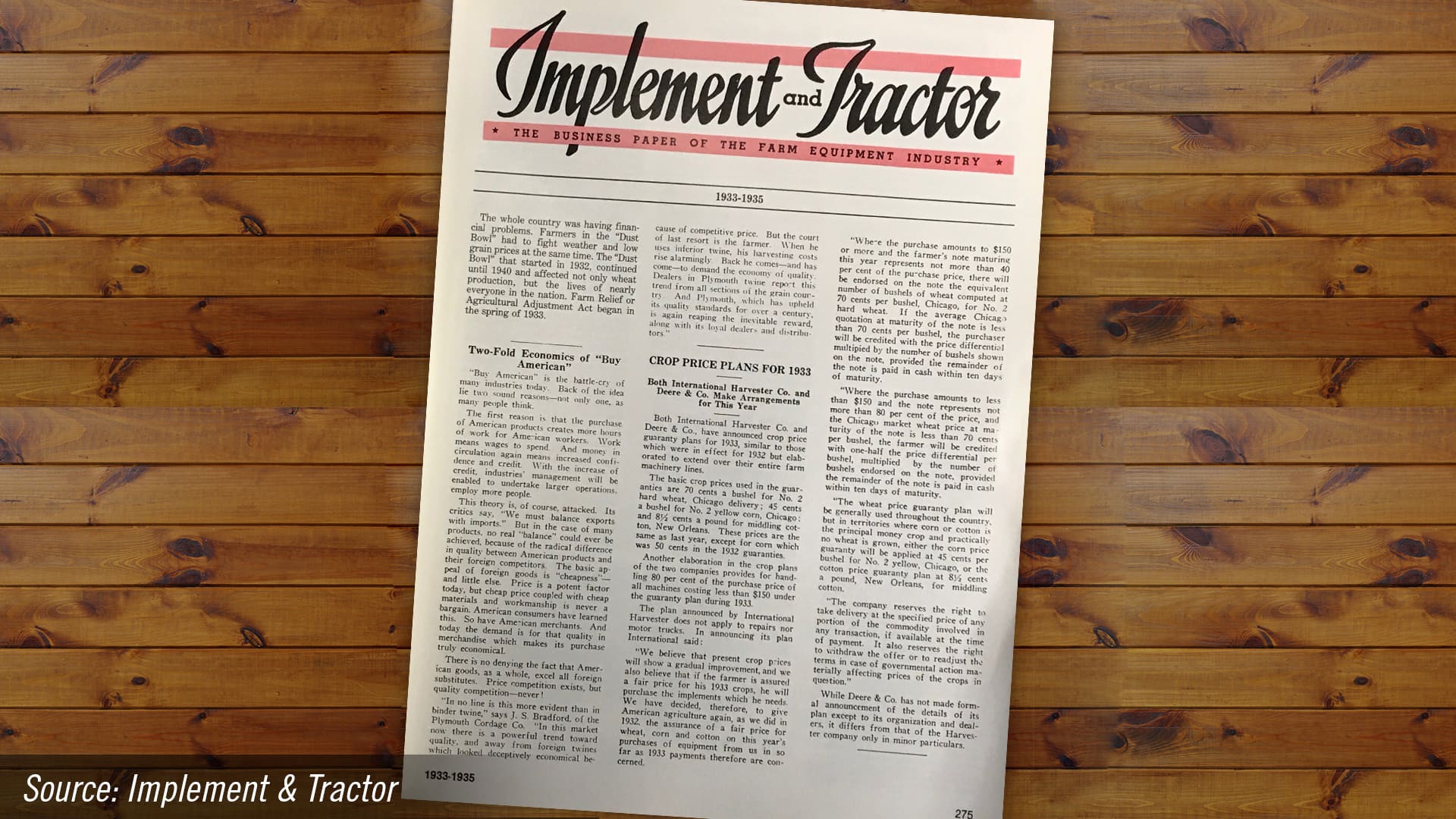 The basic crop prices under the guaranties were 70 cents per bushel for No. 2 hard wheat, 45 cents per bushel for No. 2 yellow corn, and 8.5 cents a pound for middling cotton. According to an Implement & Tractor article from that period, another elaboration in the crop plans of the two companies provided for handling 80% of the purchase price of all machines costing less than $150 under the guaranty plan during 1933.

The article quotes International Harvester as saying, “We believe that present crop prices will show a gradual improvement, and we also believe that if the farmer is assured a fair price for his 1933 crops, he will purchase the implements which he needs. We have decided, therefore, to give American agriculture again, as we did in 1932, the assurance of a fair price for wheat, corn and cotton on this year’s purchases of equipment from us in so far as 1933 payments therefore are concerned.”

[Podcast] Is Titan Ready to Pick Up Acquisition Activity Again?