Ethanol Exports Could Grow, But Little Impact on Equipment Sales

The latest episode of On the Record is now available! In this week's program we look at a recent CoBank report on the potential for ethanol production growth over the next decade. Also in this episode, Jack Zemlicka discusses the post-planting mindset of "selling solutions" in the Technology Corner, and we dig into some of the results of the 6th annual Strip-Till Practices study from Strip-Till Farmer, another drop in machinery loans in the Dallas Federal Reserve district and improved 2Q revenues for Art's Way.

While the expected fall off in corn production during the current cropping year could help bolster the sagging bottom lines of growers, it’s adding to the anxiety levels of ethanol producers who are already looking at tight operating margins.

Ethanol production, which helped fuel the ag equipment sales boom in the middle part of the past decade, continues to utilize more than one-third of annual corn production. But, according to a July 2 report from CoBank’s Knowledge Exchange Division, the industry shouldn’t expect much domestic growth from ethanol production during the next decade.

On the other hand, they say exports of ethanol could provide a needed boost.

According to the U.S. Energy Information Administration, domestic ethanol demand will see limited growth of about 1% in 2020 vs. 2018. Over the next 5 years, domestic demand is expected to be flat. This is the result of flat or declining gasoline demand. The EIA’s projections don’t take into consideration potential growth of E15, or fuels that utilize a 15% ethanol blend vs. the current 10% blend, but this expected to remain small in the next few years. 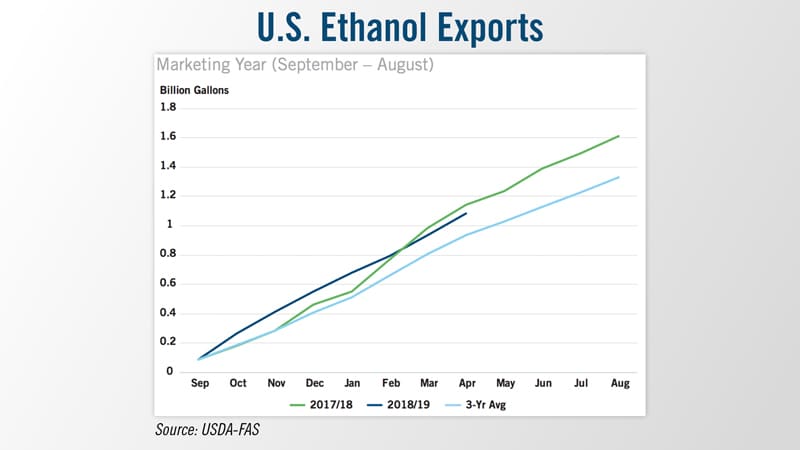 Ethanol exports, on the other hand, offer corn growers and ethanol producers some hope for growth. According to CoBank market researchers, exports have been the demand growth star in recent years as about 10% of total U.S. ethanol production has been exported over the past 5 years. Significant growth in ethanol production hinges on China as it has announced plans to mandate E10 gasoline usage. Whether or not it follows through on its E10 initiative remains to be seen.

In any case, the current and projected levels of ethanol usage will provide only a marginal boost for farm machinery sales in the short term.

This week’s Dealers on the Move include Ziegler Cat, Java Farm Supply and 21st Century Equipment.

AGCO dealer Ziegler Cat broke ground on a new facility in Willmar, Minn. The 2-story facility will feature a retail showroom, 25,000 square foot shop, warehouses, offices and a 7,800 square foot cold storage. The entire facility will be powered by a Caterpillar solar micro-grid.

John Deere dealer 21st Century Equipment has begun construction on a new store in Burlington, Colo., and is expanding its shop at its Flagler, Colo., location by 12,000 square feet. The project will include a 33,000 square foot building in Burlington that will be built at their present location directly east of the current main facility. The estimated completion date for Burlington is February 2020. The Flager addition is expected to be completed by October 2019.

Summer is typically a prime timeframe for precision salespeople to engage customers on future purchasing decisions.

But with many regions dealing with delayed planting this spring, precision specialists have perhaps put off having conversations with customers about technology additions or upgrades.

Given the circumstances farmers are facing with late-emerging crops, there may be different in-season selling opportunities for dealers, particularly on the agronomic side, says George Russell, founder of the Machinery Advisors Consortium.

Aerial scouting, in-field sensing and agronomic services are among the technologies he cites as having growth potential as farmers look for ways to more efficiently manage their crops toward a profitable harvest.

Russell adds that the current market could also force some dealers out of their comfort zone, based on customer demand for in-season services, to expand their precision business or partner with outside companies for agronomic services.

Bankers responding to the Dallas Federal Reserve second quarter ag survey reported overall weaker conditions across most regions of the Eleventh District. They noted that heavy rainfall in the quarter had mixed effects, with some corn crops benefiting but other crops, particularly cotton, negatively impacted. Prices continued to be seen as weak.

Demand for agricultural loans plummeted, with the loan demand index falling to its lowest reading in 6 years. Loan renewals and extensions increased, and the rate of loan repayment continued to decline. With the exception of operating loans, loan volume fell across all major categories compared with a year ago. 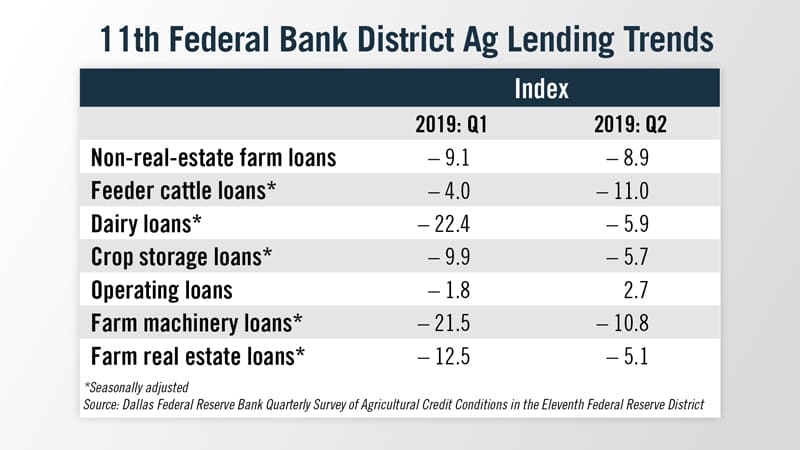 Farm machinery loans have been down through the first half of 2019. The most recent survey shows machinery loans were down 10.8% in the second quarter. This is an improvement from down 21.5% in the first quarter.

Over 200 farmers from 23 states responded to the sixth Annual Strip-Till Practices study from Strip-Till Farmer, a sister publication to Ag Equipment Intelligence. Surveyed farmers answered questions about their strip-tilling habits, equipment setups and more that strip-tillers are putting to work on their farms. 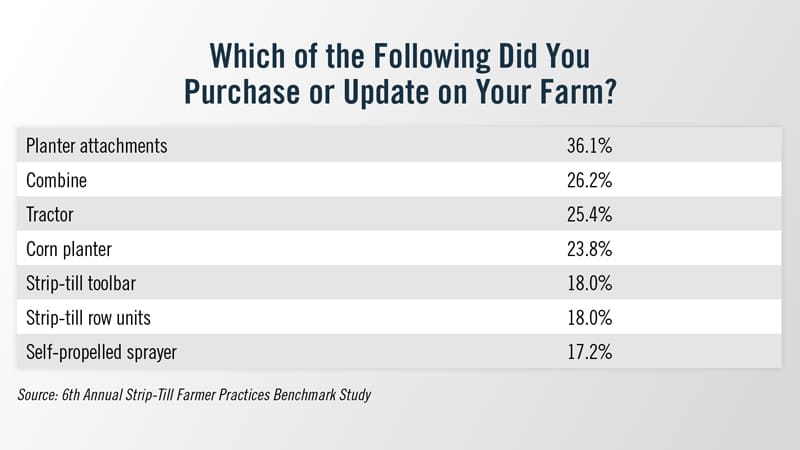 Farmers were asked about what equipment they purchased or updated in 2018, with 36% of farmers saying they bought new planter attachments. Additionally, 26% of strip-till farmers bought a new combine in 2018, and 25% of purchased a new tractor. The least popular category of equipment to replace in 2018 was self-propelled sprayers at just 17%. When asked what equipment they planned on purchasing or updating in 2019, 31% of surveyed farmers indicated they would purchase planter attachments, continuing the trend from 2018. 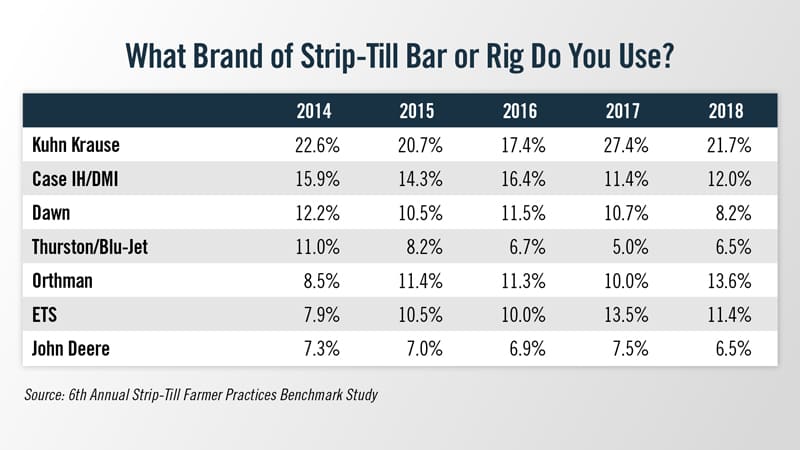 Farmers were also surveyed about what brands they utilize in their strip-till operation. For the fifth year running, Kuhn Krause remained the most popular brand of strip-till rig, with 22% of strip-till farmers using their equipment, down from 28% in 2017. Orthman came in at 14%, up from 10% in 2017. Case IH came in at 12%, up from 11% in 2017 and showing no signs of reclaiming their 2016 high of 16%. 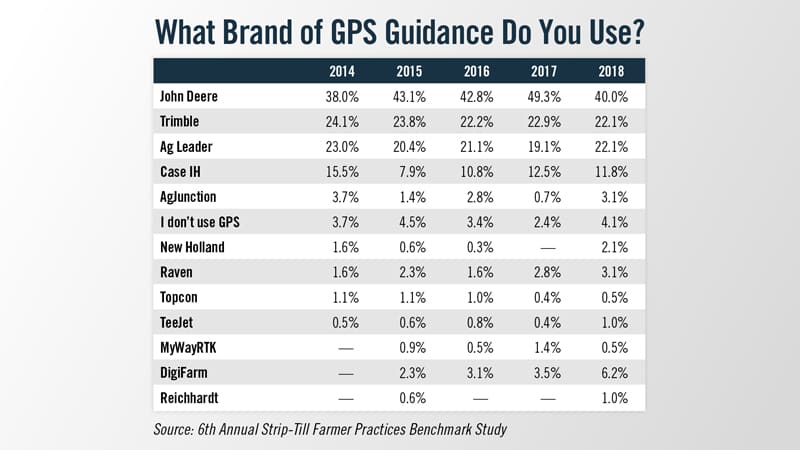 GPS brands used by strip-tillers showed some interesting fluctuation, with strip-tillers edging away from larger names and using lesser known brands more frequently. Farmers using John Deere brand GPS guidance dropped from 49% in 2017 to 40% in 2018, a 9% decline. The decline of John Deere equipment was mostly spread out among increases in smaller GPS guidance manufacturers, with notable examples being AgJunction and DigiFarm.

Shortline equipment manufacturer Art’s Way reported its second quarter revenues increased. For the quarter ending May 31, Art’s Way’s revenues were $5.7 million. That’s a 8.6% increase over the second quarter of 2018. 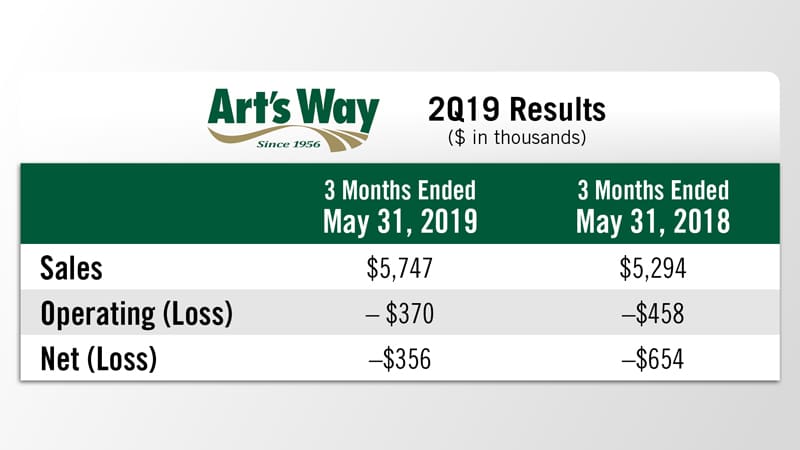 Despite growth for the quarter, revenues for the first half of the year were still down. Revenues for the 6 month period came in at $10.7 million, down 7.4% vs. the same period of 2018.

The company says the 6-month consolidated decrease in revenue was driven by a difficult sales climate in agricultural products segment due to spring flooding across the U.S., with many farmers planting on historically late dates and some concern that the crops may not be planted at all. 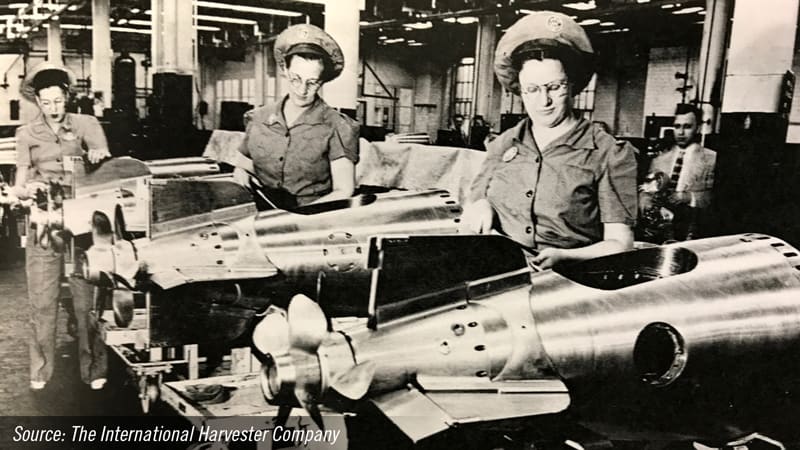 Like many manufacturers in all industries, during World War II International Harvester converted much of its production to war materials, while still also continuing to build farm equipment. During the war years, the company manufactured military trucks, tanks, diesel engines, torpedoes and other war materials amounting to over $500 million  in 1944 currency.