The latest episode of On the Record is now available! In this week’s program we discuss how the wet weather and late planting could be setting the stage for improved corn prices and farm equipment sales. Also in this episode: more action in the “Right to Repair” fight, how trade concerns are impacting Canadian equipment sales, and a California law that is creating headaches for dealers.

An About Face on Ag Fundamentals

The ag industry in North America has been in the economic doldrums for more than a half decade. Confronted by low commodity prices and high inventories, farmers, equipment dealers and manufacturers have found little to cheer about since the ag boom ended in 2014.

But this could be changing, according to industry analysts. They see the current ongoing wet weather trends and late planting as setting the stage for improving corn prices and farm equipment sales.

Stephen Volkmann, analyst for Jefferies, upgraded his outlook for both AGCO and Deere from neutral to buy this past week. According to published reports, Volkmann believes shifting farm fundamentals support double-digit growth in North America and South America for 2020. While maintaining a conservative margin outlook, Volkmann sees further upside from potentially higher margins as volumes build.

In a June 16 note to investors, Mircea (Mig) Dobre, analyst for RW Baird, upgraded his outlook for both Titan Machinery and Deere to “outperform.” In that note, Dobre says, “A rapid, meaningful shift is occurring in U.S. ag as extreme weather overshadows the Trade War.”

Late planting has fueled an increase in corn prices “sharply breaking out of a 5 year range as persistent wetness has raised supply concerns,” says Dobre. “Prices seem poised to move higher; this helps farm economics which should drive equipment demand.

Ag Equipment Intelligence editors had the opportunity to visit with Dobre earlier this week. Here’s what he had to say about the current trends in U.S. agriculture.

You can read more on Dobre’s outlook for farm equipment sales at the Ag Equipment Intelligence website.

This week’s Dealers on the Move includes Agri-Service and JLD-Lague.  [La gusch]

AGCO dealer Agri-Service recently merged its Eltopia and Pasco, Wash.,  locations in order to provide a state-of-the-art service department. Operations will continue out of the Pasco site, which is 12 miles from the Eltopia store.

JLD-Laguë, a Canadian John Deere dealership, has acquired Transdiff and JDH, two Peterbilt dealers. Between them, Transdiff and JDH have 180 employees, 5 locations and 55 service bays across the 5 Canadian territories.

Deere Guides GPS Use Among Strip-Tillers

Strip-till farmers have typically been among the most progressive adopters of precision technology, embracing tools including variable-rate seeding, implement guidance and unmanned aerial vehicles.

But RTK-level correction is often referred to as the most essential technology in a successful strip-till system, given the importance of accurately planting into a narrow strip of soil.

Results of the 6th Annual Strip-Till Operational Benchmark Study, which analyzed the 2018 cropping season of more than 200 strip-tillers from 23 states, revealed that use of RTK among strip-tillers topped 80% for the fourth consecutive year. 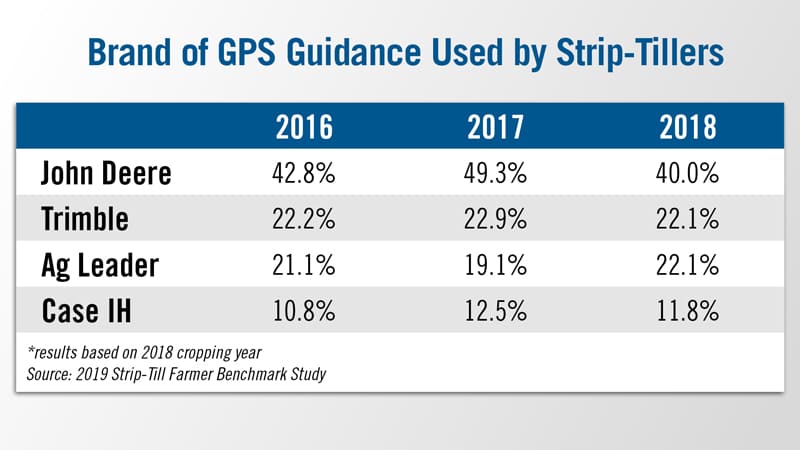 So which is the most popular brand of GPS system among strip-tillers? For the fifth year in a row, John Deere topped the list by nearly a 2 to 1 margin over second place. While 40% of strip-tillers utilize Deere guidance, the total is more than 9 points down from last year.

Trimble and Ag Leader tied for the second spot at about 22% each, largely consistent with prior years, while just under 12% of strip-tillers utilize Case IH GPS systems.

There was the most diversity among GPS companies in this year’s benchmark study, with at least eight different brands being used by at least 3% of respondents.

You can see more comprehensive analysis of the 6th Annual Strip-Till Benchmark study to include breakdowns of equipment usage, fertilizing practices and yield data during a free, live webinar event on Thursday, July 11. Visit StripTillFarmer.com/webinars for more information.

The Equipment Dealers Assn. along with the Assn. of Equipment Manufacturers recently submitted data related to the Federal Trade Commission’s “Nix the Fix” workshop. The data relates to “Right to Repair” legislation and policy reasons why EDA and AEM support end users’ right to repair equipment but do not support the right to modify due to environmental and safety concerns, explains Natalie Higgins, EDA’s vice president of government relations and general counsel. 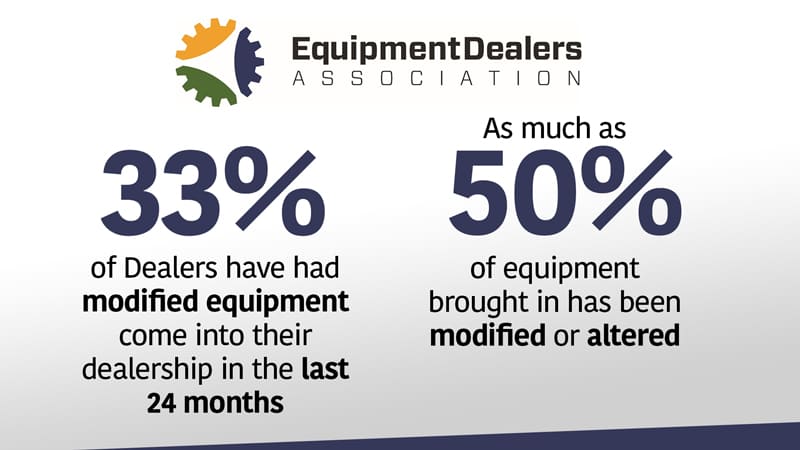 According to their report, 33% of dealers say modified equipment — meaning it has been altered from manufacturer settings —has come into their dealership in the last 24 months.  This includes engine tuning or chipping, changes to hydraulic systems or safety mechanisms.

Some dealers reported as much as 50% of the equipment brought into their dealerships for service had been modified or altered. 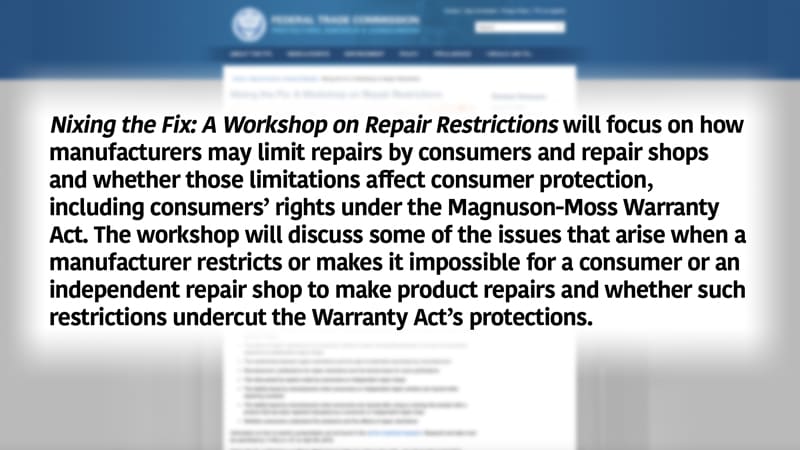 According to the FTC website, the workshop “will focus on how manufacturers may limit repairs by consumers and repair shops and whether those limitations affect consumer protection, including consumers’ rights under the Magnuson-Moss Warranty Act. The workshop will discuss some of the issues that arise when a manufacturer restricts or makes it impossible for a consumer or an independent repair shop to make product repairs and whether such restrictions undercut the Warranty Act’s protections.”

To date, Right to Repair has been a legislative issue on the state level, but with the FTC’s involvement there’s potential for it to become a federal issue. The FTC workshop will take place in July. 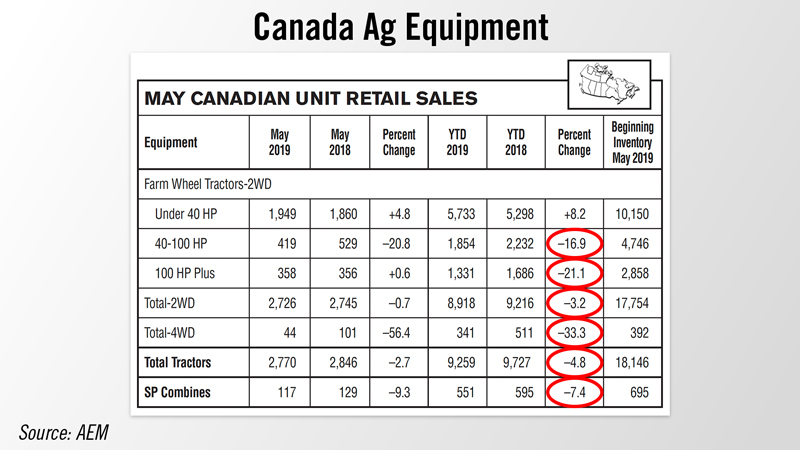 “I would say, probably, it’s just a bunch of things coming together at the same time to create a market where buyers are not buying if they don’t have to. There was the moisture situation. It looked quite dry in many parts of Canada for quite a lot of the early year. In our area, some of the other areas, now we’re sitting really nicely. And then of course the whole trade dispute: most prominently the dispute with China over the extradition of the Huawei executive, which led to China imposing some sanctions, such as banning the import of canola seed. And there’s a lot of things that Donald Trump’s doing too to create some uncertainty in terms of world trade, and I think that’s probably having an impact on prices. But even if it’s not impacting prices in a huge way, it’s certainly on the minds, I think, of farmers in terms of the uncertainty.”

Though some dealers responded to the survey saying they experienced increased demand and successfully lowered used inventory numbers, Stankievech noted the severity of the Canadian downturn varied by region, including Saskatchewan which has been particularly suffering from dry weather.

In 2016 California’s then governor Jerry Brown signed into law a bill that authorized the increase of the state’s minimum wage to $15 over the next several years. This is causing stress on farm equipment dealers in the state, particularly those who operate stores in other states as well. Ag Equipment Intelligence editors recently learned about the challenge. 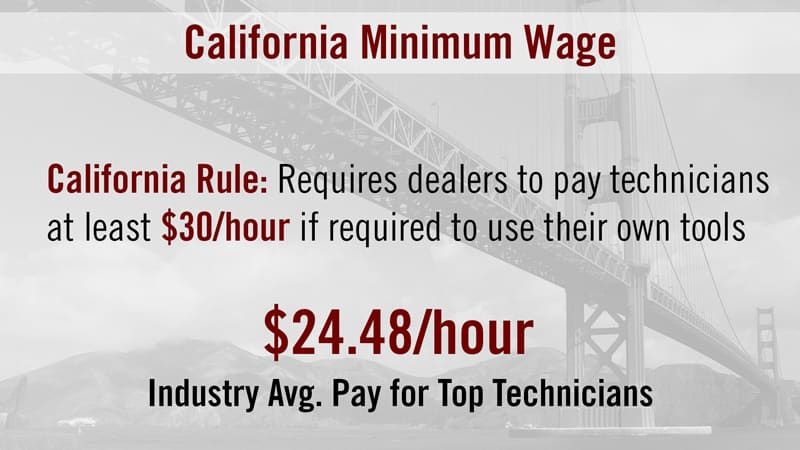 According to a letter the Far West Equipment Dealers Assn. sent to the director of the California Department of Industrial Relations, a particular issue with Section 9 of the Industrial Welfare Commission Wage Order No. 7 is that it “establishes the rule that employers must provide and maintain those tools or equipment that are required by the employer or that are necessary to the performance of the job.

“This same Section 9 also sets forth an exception to the general rule and permits an employer to require that the employee provide hand tools and equipment customarily required by the trade or craft so long as the employee makes at least two times the minimum wage for each hour worked.

With the new minimum wage, that would be at least $30 per hour. For reference, according to the 2017 Equipment Dealers Assn.’s Compensation & Benefits Survey  the average hourly wage for a top technician is $24.48.

For dealers with stores in California, as well as other surrounding states, this introduces a pay equity issue and also drives up the cost of doing business.

And now from the Implement & Tractor archives…

In early 1916, Walter Siler, an engineer for John Deere, began developing a motor cultivator. His concept mounted an existing horse-drawn Deere cultivator ahead of a powered unit. It was steered by turning a large horizontal wheel that pivoted the front half of the machine — an early form of articulation. Before long, Deere began testing the machine for other field jobs. In spring of that year, Farm Implement News published a story announcing “Deere to Make Small Tractor,” saying in addition to cultivating row crops, it would do substantially all of the farm work ordinarily done by one team. “The retail price will approximate the cost of a span of good horses. The Trade name of the machine will be the John Deere One Team Tractor,” the article said.

Are Bobcat and Farmtrac Tractors Returning to the U.S.?