The Ag Economy Barometer, an agricultural producer sentiment measure based upon a nationwide mid-month survey of 400 U.S. agricultural producers, dropped again in May. The May barometer reading of 101 was 14 points lower than a month earlier and was the lowest barometer reading since October 2016. For the second month in a row, the decline in farmer sentiment was attributable to big declines in both the Index of Current Conditions, which fell from 99 in April to 84 in May, and the Index of Future Expectations, which fell from 123 in April to 108 in May. This month’s declines in the barometer and in its two sub-indices effectively erased all of the large improvement in farmer sentiment that took place following the November 2016 election. This month’s survey was conducted in mid-May, in the midst of a wet spring planting season, but prior to USDA’s announcement that a second round of trade dispute payments would be made to U.S. crop producers in 2019. 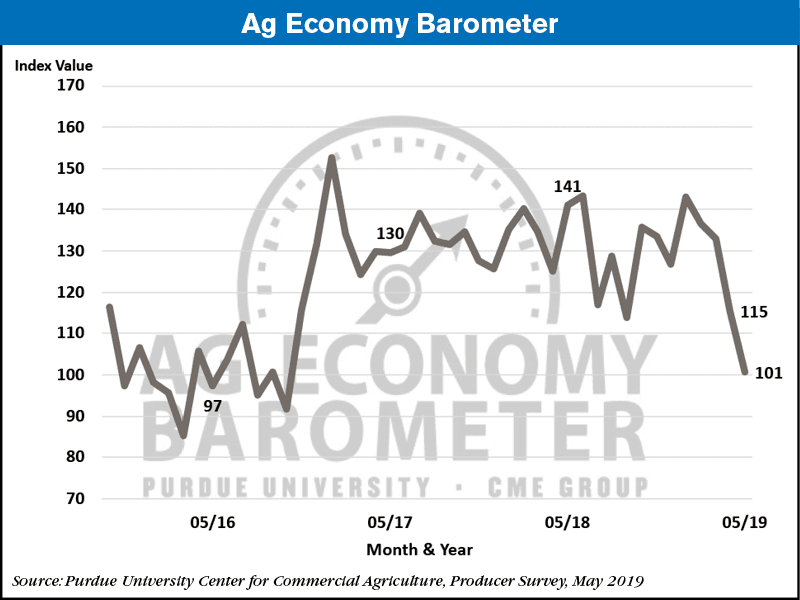 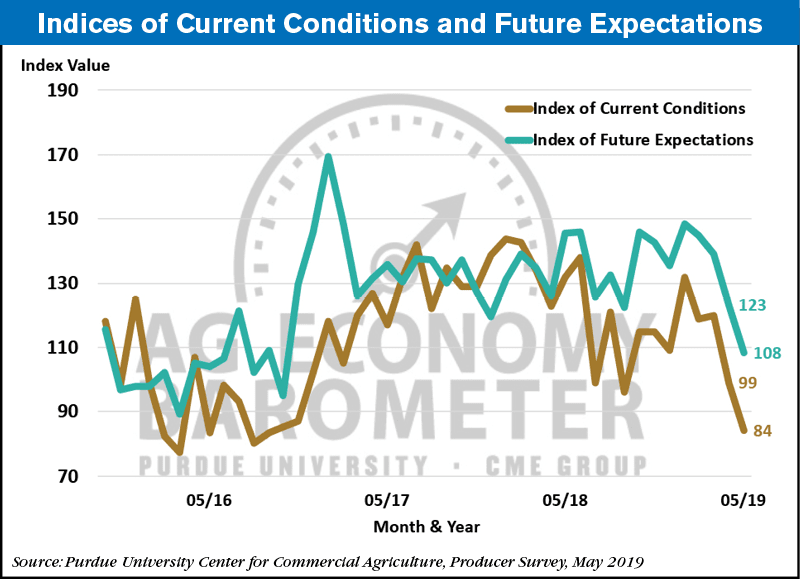 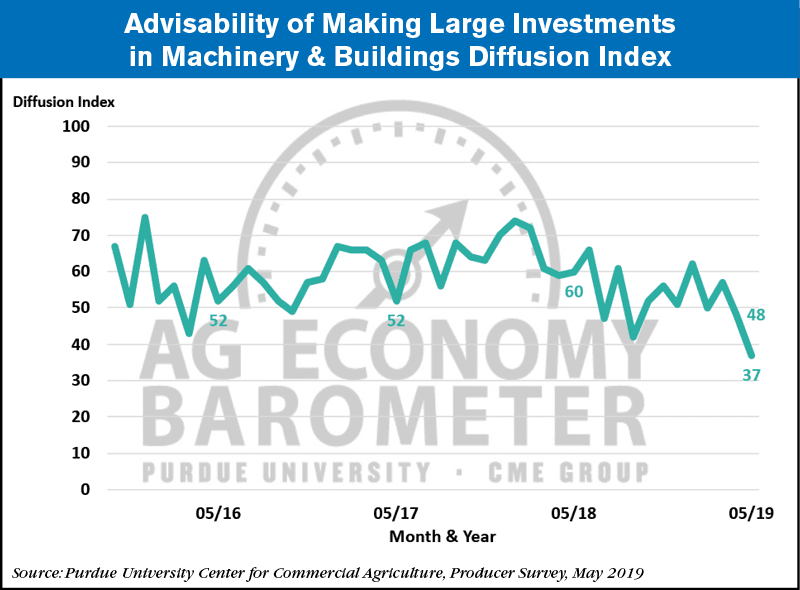 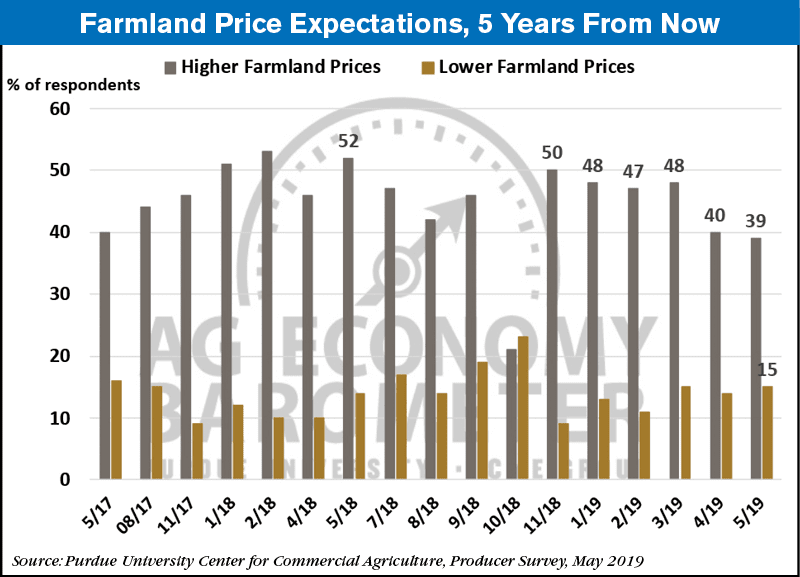 Periodically, we ask producers whether they expect farmers’ equity position to improve, diminish, or stay the same over the next 12 months. Responses to this question provide a guide with respect to farmers’ overall assessment of profitability in the production agriculture sector. Throughout the history of our surveys, farmers have not been very optimistic regarding future changes in farmers’ equity position with more than one-third of respondents consistently expecting farmers’ equity to decline. With that caveat in mind, producers exhibited a noticeably more negative view in May than the last time we posed this question back in February. In May, 55% of respondents told us they expect farmers’ equity to decline over the next year, up from 39% that felt that way in February and 35% that felt that way a year earlier. 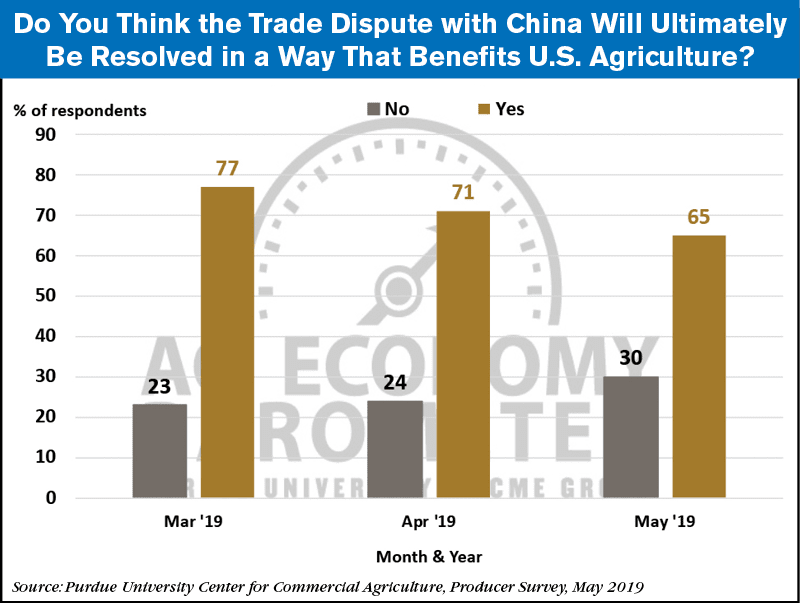 One source of anxiety for U.S. farmers continues to be uncertainty about agricultural trade. Over the last three months we’ve been asking survey respondents two questions about the trade dispute with China to ascertain how optimistic or pessimistic they are regarding future trade prospects. The first question focuses on the percentage of producers that expect the soybean trade dispute with China to be resolved by July 1, which has declined rapidly. On the March survey 45% of respondents expected the dispute to be resolved by July 1, but that percentage declined to 28% in April. Most recently, on the May survey, just 20% of farmers in our survey said they expect the dispute to be resolved by July 1.

The second question we have been tracking with respect to trade is focused on whether or not producers expect the trade dispute with China to ultimately be resolved in a way that benefits U.S. agriculture. In March just over three-fourths (77%) of respondents told us they expected a favorable outcome to the trade dispute. That percentage declined to 71% in April and, on the May survey, approximately two-thirds (65%) of respondents said they still expect a favorable outcome for U.S. agriculture.

For the second month in a row, agricultural producer sentiment experienced a big decline as the Ag Economy Barometer fell 14 points in May to a reading of 101. The sentiment decline was again driven by producers’ weakening perceptions of both current economic conditions and expectations for the future. Overall, producer sentiment was the most negative we have observed since October 2016. The Large Farm Investment Index fell to its lowest level since data collection began in fall 2015, indicating that farmers are very reluctant to make major investments in their farming operations. Farmers’ expectations for both short-run (12 months ahead) and longer-run (5 years ahead) changes in farmland values also weakened, especially when compared to their perspectives in early 2019. Finally, producers’ confidence that the trade dispute with China will be resolved quickly is waning and they were also less confident that the trade dispute would ultimately be resolved in a way that favors U.S. agriculture than they were earlier in the year.