The Ag Economy Barometer rebounded in June to a reading of 126, 25 points higher than a month earlier. The barometer is based upon a nationwide monthly survey of 400 U.S. agricultural producers. Both of the barometer’s sub-indices, the Index of Current Conditions and the Index of Future Expectations, improved compared to a month earlier. The largest increase was in the Future Expectations Index, which rose 33 points compared to a 13-point improvement in the Current Conditions Index. The rise in the Index of Future Expectations effectively wiped out the two-month decline in future expectations that took place during April and May, pushing the index back up to the level observed in March. This was in contrast to agricultural producers’ sentiment regarding current economic conditions which, although improved from a month earlier, remained well below that of earlier this spring. The June reading of the Index of Current Conditions stood at 97, which was still 23 points lower than in March. 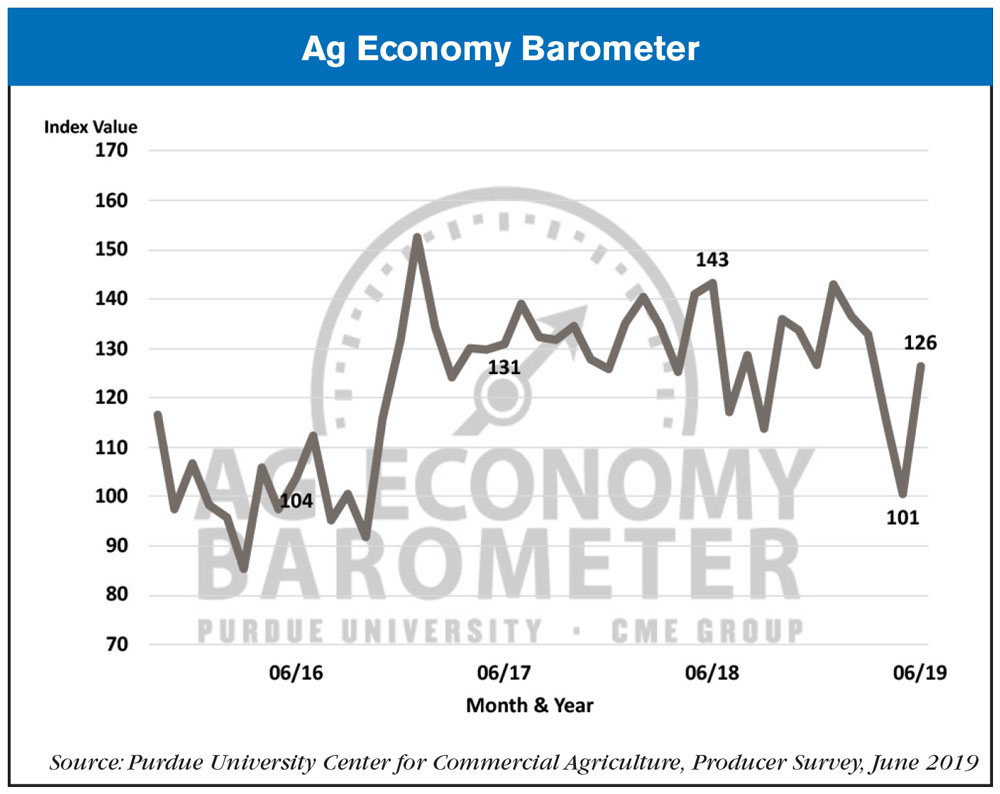 The improvement in farmers’ sentiment occurred in the midst of this spring’s corn and soybean planting delays in the nation’s mid-section, which is expected to lead to unprecedented levels of prevented planting claims for both corn and soybeans. The prospect of large prevented plantings, combined with expectations for yield reductions attributable to delayed planting, pushed both corn and soybean prices up sharply since the May survey was completed, which contributed to the sentiment improvement. From mid-May to mid-June nearby CBOT corn futures prices increased by about $1 per bushel (+28%) and nearby CBOT soybean futures prices also increased by nearly $1 per bushel (+12%). This month’s Ag Economy Barometer survey was also conducted after USDA announced on May 23 that a new round of Market Facilitation Payments (MFP) would take place in 2019 and after President Trump signed the Disaster Aid Bill in early June.

USDA’s announcement of a 2019 MFP program indicated that payments would be based on planted acres of a large number of covered crops, including corn and soybeans. In particular, USDA indicated that prevented planting acres would not qualify for MFP payments. In light of that announcement and the historic corn and soybean planting delays this spring, we asked producers who planted corn or soybeans in 2018 whether or not the MFP announcement affected their decision on whether or not to take a prevented planting payment this year. 10% of corn and soybean producers said it did impact their prevented planting decision making and one out of five farmers within that group said they intended to plant more corn, while one out of ten farmers within that group said they intended to plant more soybeans, because of the MFP program announcement. 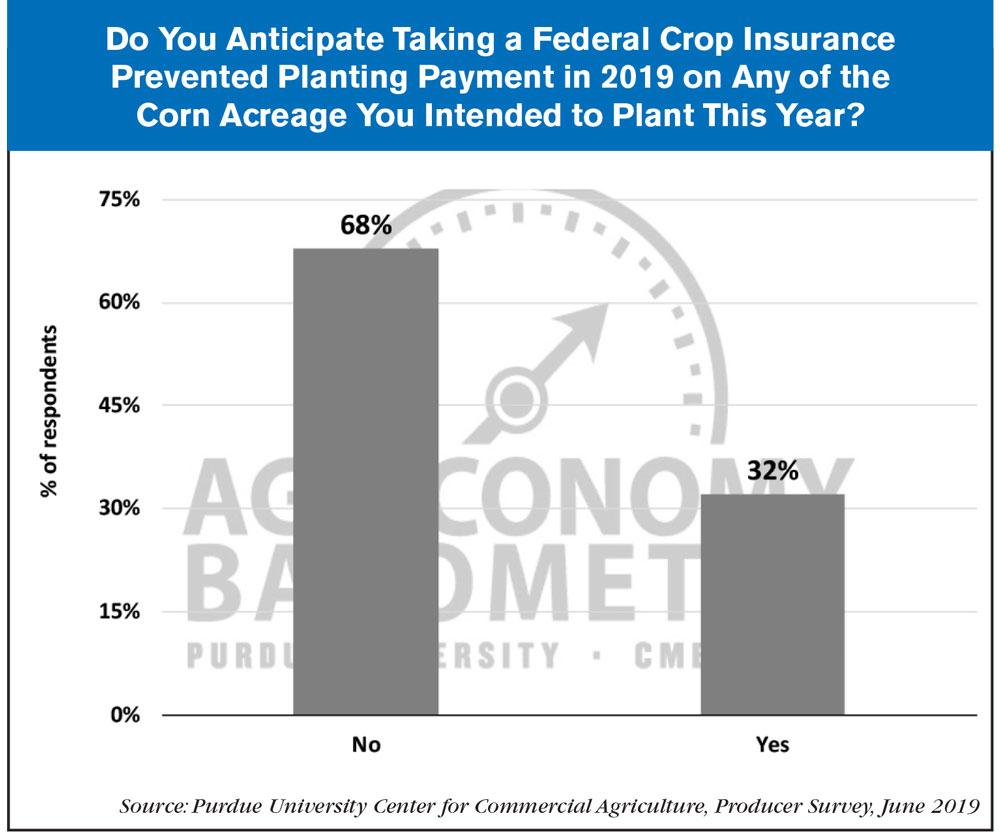 Farmer sentiment improved in June compared to a month earlier on the strength of a rise in crop prices coupled with USDA’s announcement of a 2019 MFP program and Congress’ passage of a Disaster Aid Bill. The sentiment improvement was motivated in large part by better expectations for future conditions in agriculture. Qualifying for MFP payments in 2019 requires that producers plant a crop, farmland enrolled in Federal Crop Insurance’s prevented planting program will not qualify. Approximately 10% of corn and soybean producers in our survey said the MFP program influenced their planting intentions by encouraging them to continue planting to qualify for MFP payments. Nearly one-third of corn and soybean producers said they intend to enroll some of their intended corn acreage in Federal Crop Insurance’s prevented planting program with just over half of them planning to take prevented planting on more than 15% of their intended corn acreage. Farmers indicated they are still very cautious about making large investments in their farming operation as the Large Farm Investment Index remains mired at its second lowest level since data collection began in 2015. Finally, compared to a month earlier, farmers were somewhat more optimistic that the soybean trade dispute with China would be settled soon.

In this week's episode we take a first look at the UAW strike at 14 of Deere's U.S. facilities. In the Technology Corner, Michaela Paukner examines Kubota's planned acquisition of AgJunction for $72.8 million. Also in this episode, California Gov. Gavin Newsom has signed a bill that will ban gas-powered small-off road engines. Ben Thorpe reports on dealers early orders heading into 2022, based on the results of Ag Equipment Intelligence's Dealer Business Outlook & Trends report. Art's Way reported its second straight profitable quarter, and saw Agriculture Products segment sales for the third quarter improve by 27% vs. last year.
View More