Deere & Co. posted decent ag equipment sales numbers last week when it reported its second quarter fiscal year 2019 earnings, but the company said it is looking at slowing production of big ag equipment by as much as 20%.

While those numbers looked were pretty good to many of us, the numbers financial analysts pay close attention to weren’t quite up to snuff. Mircea (Mig) Dobre, Industrial & Machinery analyst for RW Baird, headlined his May 2017 note to investors, “Deere & Co. 2Q Initial Look: EPS Miss, Soft Margin, Guide Cut on Dealer Destock.” He summed up his outlook for Deere stock with by commenting, “Softer farmer sentiment against elevated retail inventories driving the lower Ag outlook as retail outlooks were unchanged.”

In an earlier note, Dobre lowered his share target price for both Deere and Titan Machinery. “Fundamentals have weakened as 2019 progressed, the recent trade flare-up is likely to further weigh on farmer sentiment, stalling the equipment demand recovery. Dealer inventories have risen posing an additional risk …  CNH’s 1Q report points to rising risks for both Deere and Titan Machinery. Positively, price/cost is improving which should help Deere yet we suspect this alone will not be enough,” Dobre said.

During the conference call with analysts following release of its earnings report, Josh Jepsen, Deere’s director of Investment Relations, said, “We'll see lower production shipments in the second half of the year … if you look at couple of our larger facilities on a unit basis, they’ll be down second half compared to second half of 2018 in the 20% range.” He added that output reductions will mainly focus on large equipment in the North American market.

Cory Reed, Deere’s president of Ag and Turf for the Americas,  added, “We are taking down production in an effort to calibrate our field inventory and where we want to end the year to position ourselves for 2020. The only thing I’d point out on that comment on the 20%, that’s a couple of our large ag factor[ies], so that’s not broadly across the entire division. But on a production unit basis, that’s the magnitude we are seeing in the few of our larger facilities.”

Agriculture & Turf sales for the quarter and year to date increased due to higher shipment volumes and price realization, partially offset by the unfavorable effects of currency translation. Operating profit declined for both periods mainly due to higher production costs, the unfavorable effects of foreign-currency exchange and higher research and development expenses, partially offset by price realization and higher shipment volumes.

During the call, Reed also addressed some of the reasons, relating mostly to current ag fundamental for the slowing of ag equipment production, which have several causes, including inclement weather during the planting season and trade issues, which have added more uncertainty to 2019 commodity prices and overall crop receipts. 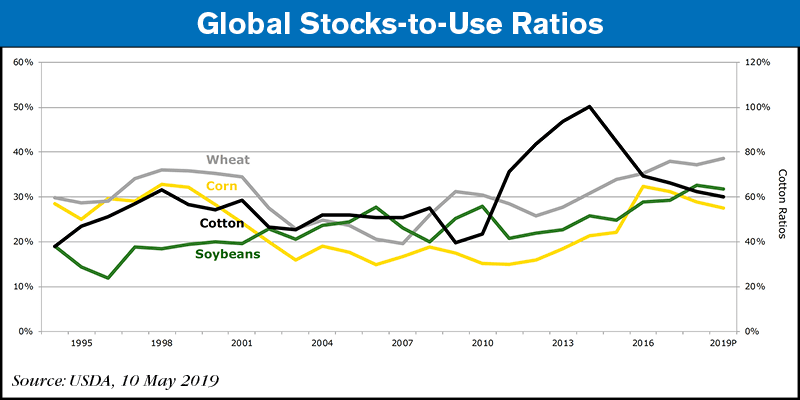 He said, “Despite high production levels forecasted for the ’19 and ’20 season, corn's global stock-to-use ratio is expected to decline in response to record consumption outpacing supply. Conversely, week stock to use ratio is projected to increase in ’19 and ’20 due to a sharp production recovery from last year’s drought stricken regions, such as Europe and Australia.

“Meanwhile, soybean stock-to-use ratio was forecasted to remain at elevated levels through ’19 and ’20 marketing year in response to higher than expected yields in the U.S. and the ongoing trade dispute between the U.S. and China. The inventory increase is further compounded by uncertainty for near term global demand as the African Swine Fever has significantly diminished the herd size in China.” 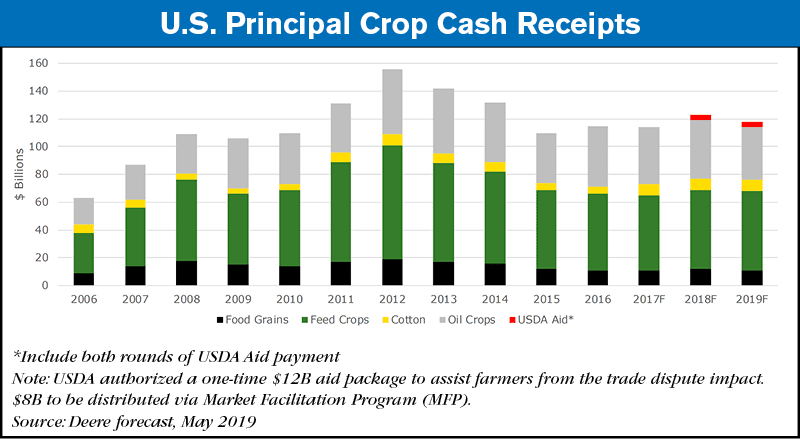 Reed then went on to outline Deere’s outlook for U.S. principle crop cash receipts, which he said is an important indicator for equipment demand. “2019 principle crop cash receipts are estimated to be roughly $117 billion, a decline of 4% since last quarter, reflecting recent pressure on commodity prices resulting from rising stocks, diminished market access and near term demand uncertainty. The confluence of these factors compounded further by U.S. late planting seasons have adversely affected farmer sentiment in recent weeks.”

Reed also pointed to trade talks between the U.S. and China, which he said is becoming increasingly important to the near term sentiment.

“By region, our 2019 ag and turf industry outlooks include the following. Industry sales in U.S. and Canada are forecasted to be flat to up 5% for 2019. However, as near term fundamentals have weakened, we anticipate large ag industry sales to be on the lower end of that range with Canadian demand turning negative due to adverse weather and currency fluctuations and further complicated by tariffs on certain crops, such as canola and lentils.”

For Deere’s small ag equipment, Reed said compact tractors continue to show a strong order book for 2019, driven by healthy U.S. economy and GDP growth, while growth from mid-sized tractors is more modest due to the softness in the livestock and dairy sector. Industry retail sales of turf and utility equipment in U.S. and Canada are projected to be flat to up 5% in 2019 based on solid economic factors that are supported by continue consumer confidence.

Deere’s outlook for the EU 28 is forecast to be flat in 2019, stabilized by healthy margins for the edible and dairy sectors in the south and west regions, offsetting less favorable conditions in the north central and northeast regions. In South America, industry sales of tractors and combines are projected to be flat up 5% for the year with strength in Brazil balanced by slowness in Argentina on account of high inflation and political uncertainty.

Shifting to Asia, he said, industry sales are expected to be flat to slightly down as key growth markets slow modestly. Lastly,

“Farmer sentiment remains quite positive in Brazil, which had a very strong first half of the year,” Reed said. “Farm margins in the region continue to be supportive of equipment demand and sentiment has been boosted following record corn and soybean harvest in 2019. We experienced positive farmer sentiment at the recent AgriShow where equipment sales continued at healthy levels. Furthermore, this year’s AgriShow featured the initial launch of our leading technologies to the Brazilian market, products such as Combine Advisor, Exact Emerge and Exact Apply were well received during their debut.”

For fiscal year 2019 sales of worldwide agriculture and turf equipment, Deere is now forecasting up approximately 2%, which includes a negative currency impact of about 3 points.

“The reduction from previous guidance relates to recent softness in the North American large ag and dairy markets, as well as our decision to under-produce retail for the remainder of the year,” Reed explained. “Furthermore, we’re reducing our full year operating margin forecast from 12% to 11% to reflect unfavorable movements in volume and mix, as well as the impact of the lower production schedules. Also, the unfavorable impact of currency is over one point.”

Deere to Lay Off Workers in Illinois and Iowa; U.S. Manufacturing Slows to 2009 Levels