Affecting last year’s results were charges to the provision for income taxes due to U.S. tax reform legislation (tax reform). Without these adjustments, net income attributable to Deere & Co. for the second quarter and first six months of 2018 would have been $1.034 billion and $1.476 billion, respectively. 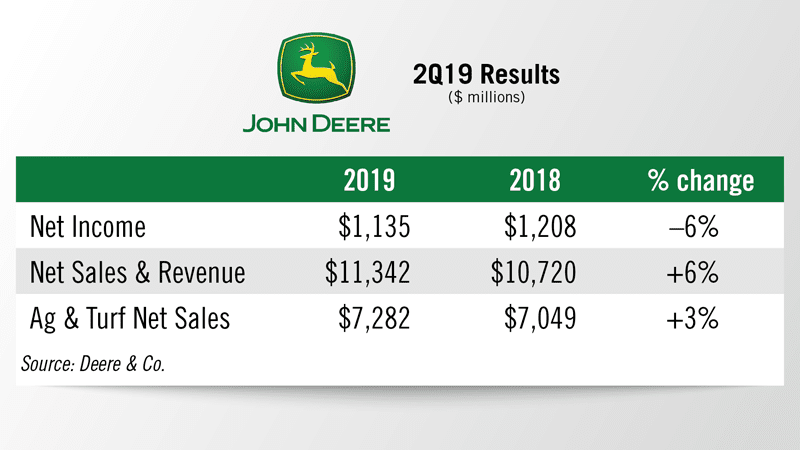 Net sales from the Agriculture & Turf division improved by 3% to $7.3 billion vs. $7.04 billion the previous year. Year-to-date, net sales for the division were nearly $12 billion, an increase of 6% vs. the first 6 months of 2018. Agriculture & Turf sales for the quarter and year to date increased due to higher shipment volumes and price realization, partially offset by the unfavorable effects of currency translation. Operating profit declined for both periods mainly due to higher production costs, the unfavorable effects of foreign currency exchange and higher research and development expenses, partially offset by price realization and higher shipment volumes.

“John Deere produced solid results for the quarter despite uncertain conditions in the agricultural sector,” said Samuel R. Allen, chairman and chief executive officer. “Ongoing concerns about export market access, near-term demand for commodities such as soybeans, and a delayed planting season in much of North America are causing farmers to become much more cautious about making major purchases. At the same time, overall economic conditions remain positive, a fact that along with a growing customer base has contributed to strong results from our construction and forestry business.”

Company equipment sales are projected to increase by about 5% for fiscal 2019 compared with 2018. Included in the forecast are Wirtgen results for the full fiscal year of 2019 compared with 10 months of the prior year. This adds about 1% to the company’s net sales forecast for the current year. Also included in the forecast is a negative foreign-currency translation effect of about 3% for the year. Net sales and revenues are projected to increase about 5% for fiscal 2019. Net income attributable to Deere & Co. is forecast to be about $3.3 billion.

“Although the long-term fundamentals for our businesses remain favorable, softening conditions in the agricultural sector have led Deere to adopt a more cautious financial outlook for the year,” says Allen. “The lower forecast is partly a result of actions we are taking to prudently manage field inventories, which will cause production levels to be below retail sales in the second half of the year. At the same time, Deere’s long-term strategies remain on track and we are fully committed to their successful execution. We continue to expand our global customer base and are encouraged by the market’s positive response to our line-up of advanced products and services.”

In this week's episode, Titan Machinery released its first quarter earnings for fiscal year 2022, with all segments reporting growth except for the rental and other division. This week's Dealers on the Move include Torgerson's, Hutson Inc. and Atlantic Tractor. Associate Research Editor Ben Thorpe takes a look at Deere's second quarter earnings and on the battle for market share between Deere and AGCO's Fendt brand. Also in this episode, a closer look at the used high horsepower tractor market and Kubota's first quarter results.
View More