The latest episode of On the Record is now available! In this week’s program the Kansas City Federal Reserve Bank reports loans for financing farm equipment improved in the 4Q of 2018. Ag-Pro Companies expands to now having 20 stores in Ohio. Also in this episode, AGCO, CNH Industrial and Art’s Way report their fiscal 2018 earnings.

According to the Kansas City Federal Reserve Bank, total non-real estate farm loans were up nearly 8% from a year ago. This was the seventh consecutive quarter of annual growth in loan volumes, with an average growth rate in 2018 of about 12%.

Loans for financing farm machinery and equipment represent a small portion of total lending. But, the number of loans for equipment financing nearly doubled compared to the fourth quarter of 2017. 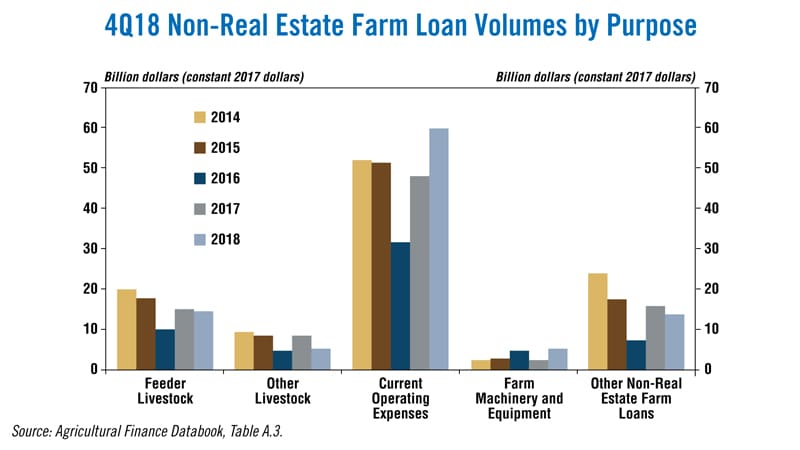 The volume of operating loans reached a historical high for the fourth quarter, increasing more than $10 billion, or 22% year over year. Loans in this category account for the largest share of non-real estate farm loans and have increased in the last eight quarters by an average of 12%.

The volume of loans for all other purposes declined over that same period.

Ag-Pro Companies, John Deere’s largest dealer group by store locations, has acquired Shearer Equipment and Kuester Implement in Ohio. Altogether, Ag-Pro has acquired 20 locations in Ohio with these two acquisitions along with its acquisition of JD Equipment. The dealership now has a total of 82 locations in 7 states.

AGCO dealer Agri-Service has opened a new location in Fruitland, Idaho. The dealership has also purchased additional property in Marsing, Idaho, for a new service facility and is enhancing its parts warehousing there. The expansions in both Fruitland and Marsing are a result of evolving agriculture epicenters, which prompted the closure of facilities in Nyssa, Ore., and Caldwell, Idaho.

Canadian New Holland dealer Mazergroup has acquired Markusson New Holland in Emerald Park, Sask. With this merger, the dealership — operating as Mazergroup Regina — will be the second location Mazergroup operates in Saskatchewan along with its 14 locations in Manitoba.

New Holland dealer Forrester Farm Equipment has opened its third location in Woodstock, Va. It’s other stores are in Chambersburg and Stoystown, Pa.

Kansas Case IH dealer Bruna Implement is expanding into Nebraska with a new store in Humboldt, Neb. This is the 6th store for Bruna.

As the ag industry trends toward broader integration of equipment automation and machine learning, companies are looking for skilled talent to lead the evolution.

While traditional avenues for recruiting and retention of tech-savvy still produce quality hires, a broader search can attract and develop an alternative pipeline of talent.

This was one of the initiatives John Deere had in making its first appearance at the Consumer Electronics Show, held last month in Las Vegas. The annual show features a wide variety of cutting edge technologies in about two dozen different product categories and attracts upwards of 180,000 attendees from around the world.

“The interesting thing at the CES show though was that some of the people that we talked to who had maybe went off to a great school and got a great education, and thought maybe they needed to be in San Francisco or Denver or Austin or Israel, or some of these places that are technology hubs, they wouldn’t mind coming back home. So those are the people that ... that’s just kind of a golden nugget for us because they understand the rural lifestyle. They understand agriculture. Maybe they weren’t involved with agriculture, but they’ve got family in those rural areas. We’ll take those talents all day long in our dealer organizations.”

Dawson adds that the company also leveraged their presence at the show to be agricultural ambassadors, answering industry questions from students, start-ups and researchers.

Following a challenging year in 2018, Art’s Way, a manufacturer of niche farm equipment products, says it made significant progress in cleaning up its balance sheet and simplifying its business to prepare for better times ahead.

For the fiscal year ended Nov. 30, 2018, consolidated net sales for the company totaled $19.7 million, a 4.8% decrease from the previous year’s total of $20.7 million. According to Art’s Ways management, the decrease in revenue is due to decreased sales in its Agricultural Products and Tools segments. 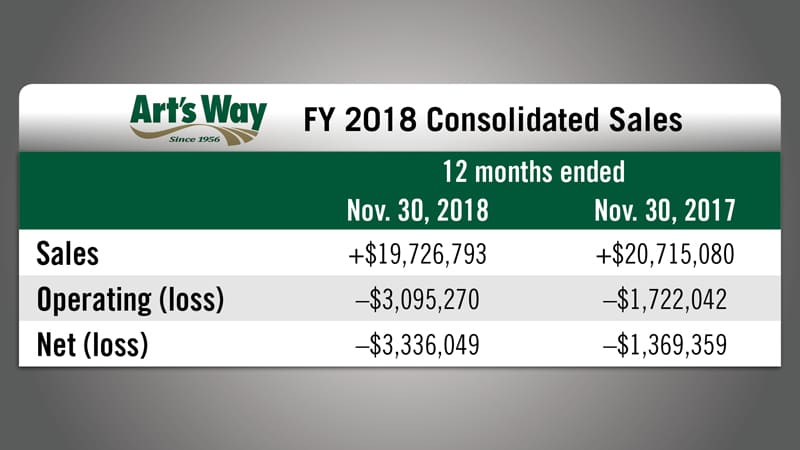 According to the company, “We experienced fairly steady demand in the 2018 fiscal year in our Agricultural Products segment and attribute the sales decrease to our decision to terminate a relationship to sell passthrough beet equipment and to liquidate our Canadian operations.”

Chairman of the Art’s Way Board of Directors, Marc H. McConnell reported, "On a positive note, we were pleased to successfully sell our Dubuque facility, liquidate our Art’s Way International operation during the fiscal year and have since sold our West Union facility. We made further progress on inventory reduction, product line rationalization and debt reduction.” He added, “We enter the new year with a marketplace that remains unsettled, but we feel that the major steps we have taken to improve our business have lowered our breakeven point and will allow for better results under similar conditions and substantially increased opportunity for profitability in an improving market." 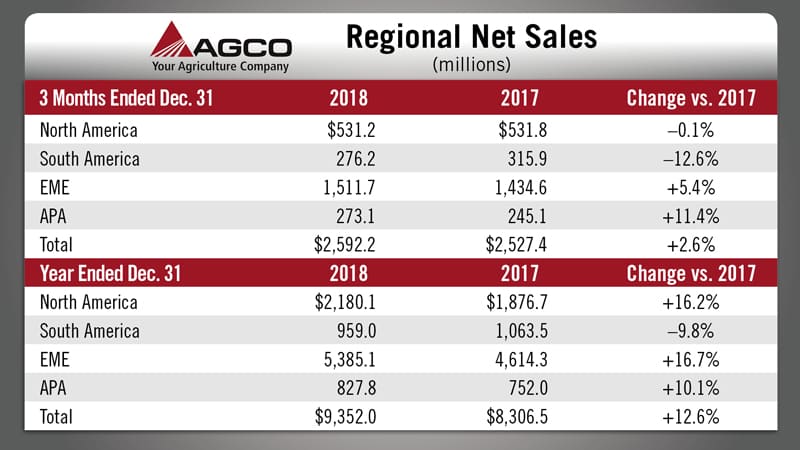 North American sales for all of 2018 were $2.2 billion vs. $1.9 billion in 2017, a gain of 16.2%. Sales growth in the U.S. and Canada was strongest for sprayers, hay tools and grain storage equipment. The company reported that income from operations increased approximately $36.2 million for the full year of 2018 compared to 2017 due to the benefit of higher sales and margin improvement.

In other regions of the world, AGCO reported sales in Europe and the Middle East increased by 16.7% and in Asia Pacific and Africa by 10.1%. Their equipment sales in South America fell by nearly 10%.

According Mig Dobre, analyst for RW Baird, AGCO’s backlog at the end of 2018 was flat year-over-year in North America and Europe and higher in South America.

CNH Industrial also posted a strong year-over-year sales gain in 2018. The company reported consolidated revenues of $29.7 billion for the full year, up 7% compared to 2017. Net sales of Industrial Activities were $27.8 billion for the year, up 8% vs. 2017. 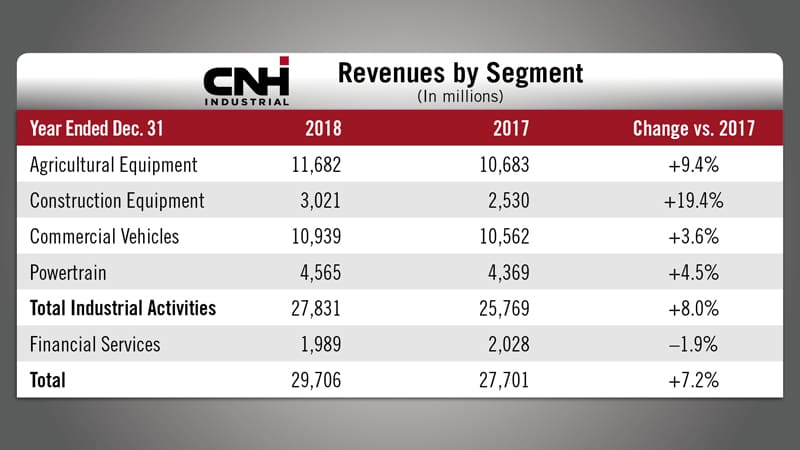 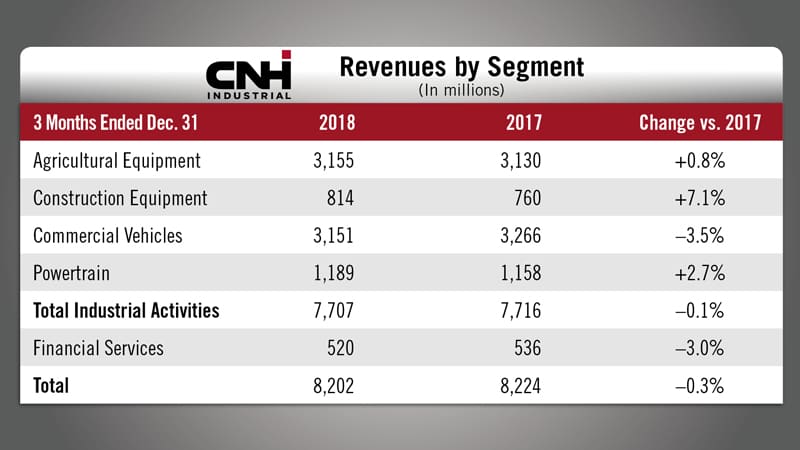 Net sales for CNH Industrial’s Ag Equipment segment increased 9% and total revenues grew by 9.4% for the full year 2018 vs. 2017. According to the company,  the increase was driven by a sustained price realization performance, coupled with a stabilization of end-user demand in most sectors, including further evidence of a replacement cycle in the row-crop sector in North America.

During 2018, CNH said worldwide deliveries of tractors and combines were up 8%, while production rose by 10% vs. 2017. It said  worldwide inventory in units was up 27% in tractors and 4% in combines with a solid order book in its NAFTA row-crop segment.

Looking ahead to 2019, CNH said sentiments in its North American ag segment continue to be soft driven by uncertainty around trade, geopolitical tensions and low commodity prices. At the same time, the company noted precision farming technologies continue to drive adoption of implements and high horsepower equipment. Overall, CNH’s outlook calls for flat demand for its low horsepower tractors and combines, but a 0-5% growth in tractors over 140 horsepower.

Results of the January 2019 Purdue University/CME Group Ag Economy Barometer indicate that farmers are more optimistic about current and future conditions compared to December. The Index of Current Conditions rose from 109 to 132 and future expectations rose to 148, 13 points higher than the December reading. 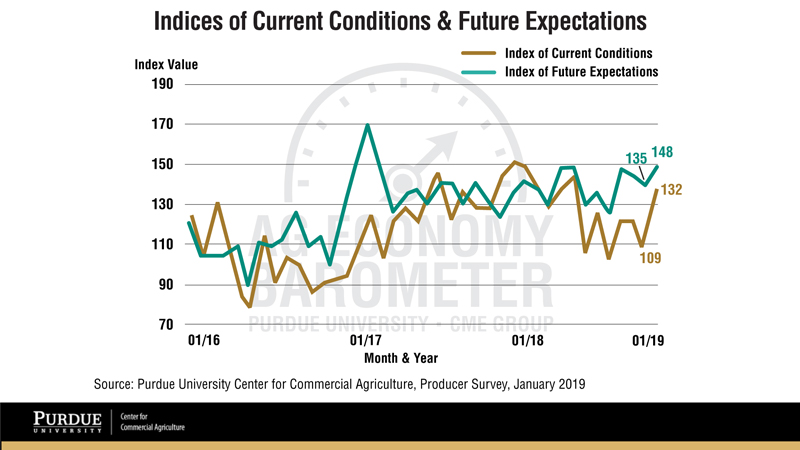 Authors of the report attribute the rise in optimism to the second round of Market Facilitation Program (MFP) payments and the passage of the 2018 Farm Bill. 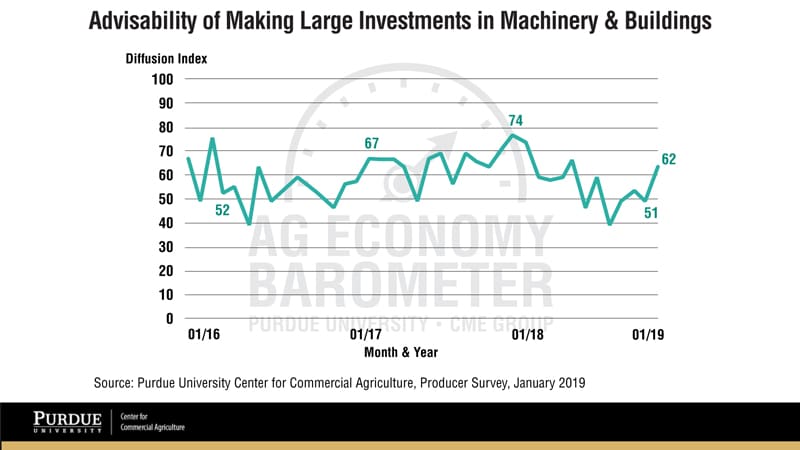 When International Harvester bought the Solar Turbine Co. in 1959, it soon began experimenting with a Solar-built turbine engine in a tractor, creating this HT-340. The turbine engine never made production, but the hydrostatic transmission did. Several running experimental HT 340s were built and shown around the country and one of which now resides at the Smithsonian Museum. Ford also built a turbine-powered tractor, the Typhoon. 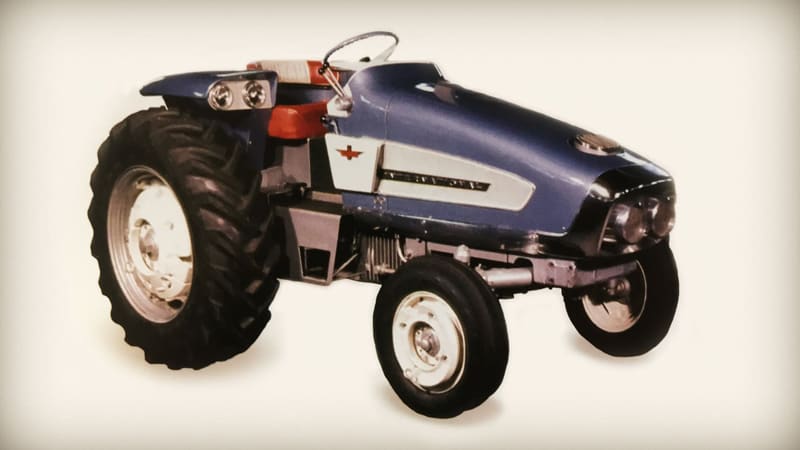 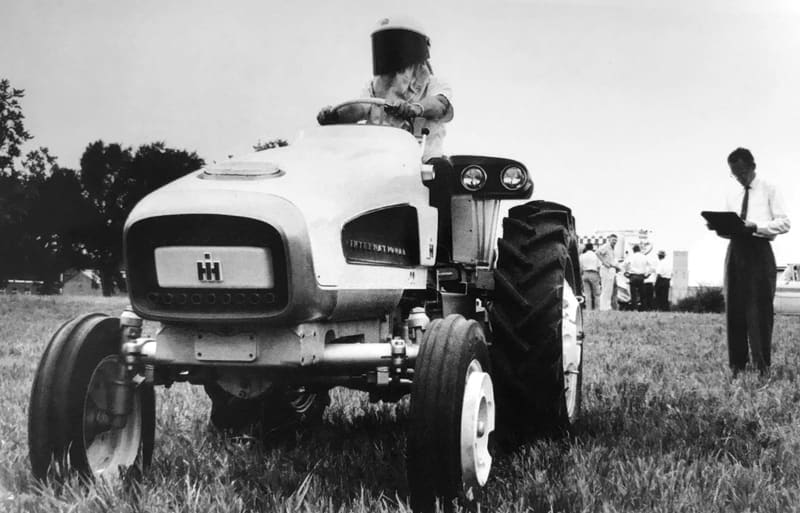 As always, we welcome your feedback. You can send comments and story suggestions to kschmidt@lessitermedia.com. Until next time, thanks for joining us .