The latest episode of On the Record is now available! In this week’s episode we take a look at how accurate USDA ERS’ farm profitability projections are. Other topics in this episode include forecasting future precision growth, dealers concerns going into 2019, how November U.S. large ag equipment sales compare to the 5-year average and dealers’ views on their used equipment inventories and used equipment pricing.

Is Farm Profitability Outlook Too Negative?

USDA’s net income projections are watched closely to forecast capital expenditures and to estimate equipment production and sales for the upcoming farm year.

On Nov. 30, USDA’s Economic Research Service released its latest outlook for farm profitability. As expected, the report indicated that U.S. farmers’ net income is expected to decline $9.1 billion, or by about 12%, from 2017 to $66.3 billion in 2018.

But have you ever wondered how accurate these projections are?

Todd Kuethe of the Department of Agricultural and Consumer Economics, University of Illinois at Urbana-Champaign, plotted the ag agency’s forecast errors for its November net farm income forecasts from 1975-2017. 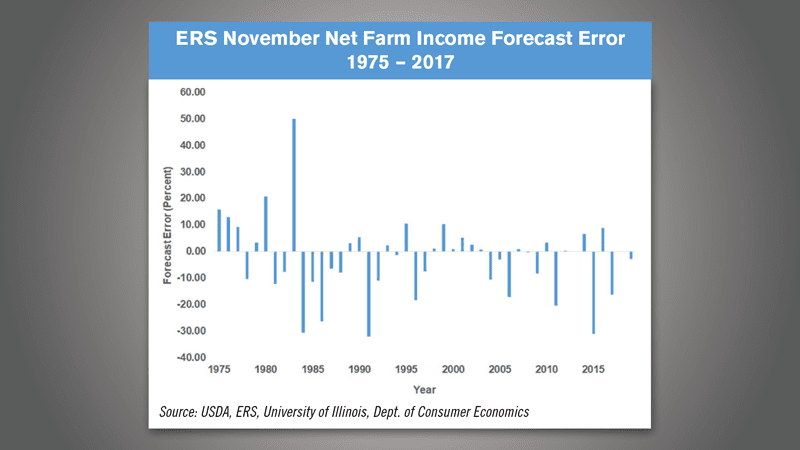 He says, while this adjust­ed forecast is still below 2017 official estimates, it reflects a more modest 8.2% decline vs. ERS’ projection of a 12.1% drop. This is a 4% difference, which is a smaller margin than the current forecast suggests.

This week’s dealers on the move include WCTractor and Redhead Equipment.

As 2018 comes to a close, it’s worth looking ahead to what the next year and beyond could bring as far as precision farming technology development and adoption.

Equipment automation, drone-based nutrient application and hybrid or electric machinery are among the innovations which are trending toward broader application, perhaps as soon as 2025, according to results of a recent study conducted by consulting company Roland Berger.

Noteworthy takeaways from the 2018 study included indications that start-up companies are driving innovations that are outside of core manufacturing objectives for OEMs.

But there is also ongoing momentum for industry partnerships among small and large ag companies to develop machine learning and robotic technologies.

Wilfried Aulbur, senior partner with Roland Berger notes that in the short-term, fleet management tools will be a point of emphasis for precision ag, while other advancements are still several years off.

“We don’t see hybrid or electric really making it in the ag field. We believe that’s something that is going to be a very long [ways] off. Yes, there are people working on it and, yes, we will face stronger emission regulations in the agriculture field, but it’s not going to be immediate.”

Aulbur adds that the firm’s research indicates that large OEMs are also entering the farm management space and investing significantly in autonomous technology. However, their confidence levels on in electric tractors are low and they have yet to venture into alternative farming methods.

Recently Ag Equipment Intelligence visited with industrial and agricultural analyst Mike Shlisky about what farm equipment dealers he’s spoken with are saying about the sales outlook for 2019.

Shlisky says, “Dealers appear to be relieved to have entered something of a stable phase centered around replacement of 3-5 year old equipment. They are also concerned about farmer reactions to higher equipment prices, lower discounts and higher interest rates, since so many farmers have seen debt levels rise over the last few years. Dealers are also reporting that farmers are paying close attention to cost; while most are not willing to forego the latest technological improvements, ‘creature comforts’ such as high-end seats and other amenities are being passed up in favor of more basic configurations.”

Besides the need to replace older equipment, Shlisky says there are two other overriding factors that could affect machine sales in 2019. These are technological improvements and political and policy changes. Planter and sprayer units are often the first off the lot in advance of planting season, and companies such as Deere have focused on bringing the technology on its sprayers up to the level of its advanced high speed planters. This is likely to be a multi-year trend for Deere, as the company further develops and uses its newly-acquired Blue River Technology division. Beyond technology, policy changes surrounding soybean tariffs and related subsidies could move the needle for equipment sales in the coming months — both positively and negatively.” 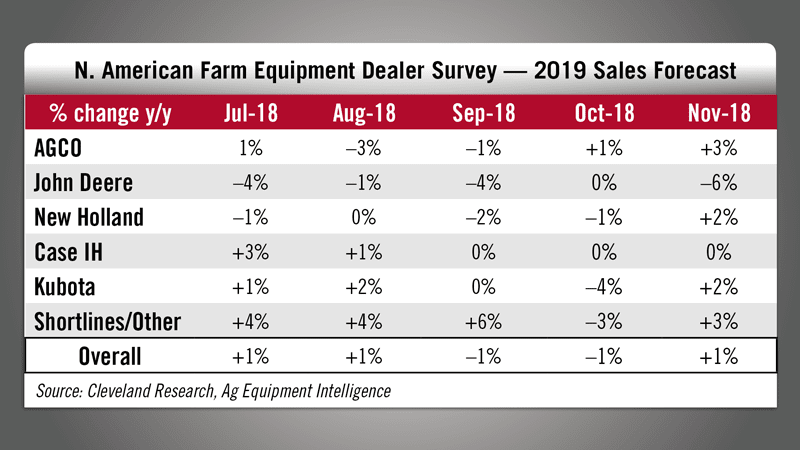 Going into the new year, overall dealers are forecasting 1% year-over-year growth, according to the results of the most recent Ag Equipment Intelligence Dealer Sentiments survey. A net 26% of dealers are expecting sales improvement in 2019 compared to 17% in the previous month

While 2018 was a year of uncertainty for ag, December has offered some bright spots Blades says.

“We have what appears to be some real promise for RFS continuing on in a positive light, perhaps even the promise of E15 being sold year round. We see that China once again is buying soybeans, that’s a good thing. And heck, most likely we’re going to get the president to sign a farm bill this week. So you get those types of things together and it may not all be good news, but it certainly does reduce some of this uncertainty that has really caused our members some concerns and your readers some concern and absolutely caused your readers and their customers the farmers a whole lot of concern.”

With the 2019 sales year rapidly approaching, North American farm equipment dealers are taking a close look at their equipment inventories, with more than one-third of them noting that combine inventories are “too high” in the latest Dealer Sentiments & Business Conditions Update survey. This was in line with the results of the previous survey when 34% of dealers said their combine inventories were “too high.” 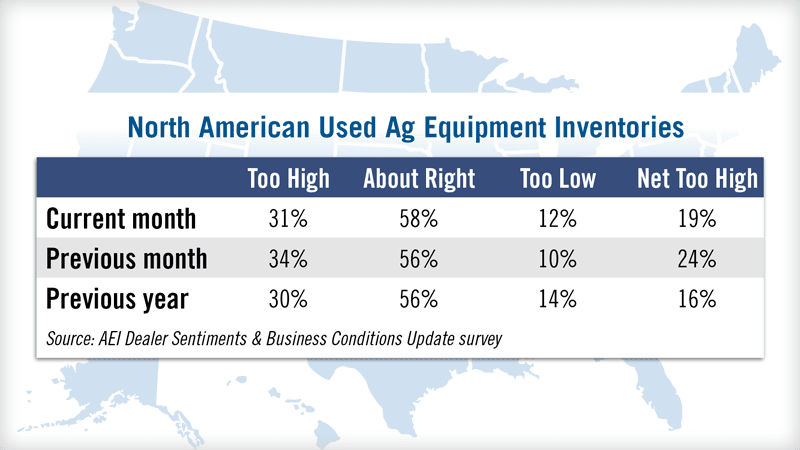 According to the most recent survey results, new equipment inventory levels improved with a net 16% of dealers reporting inventories “too” high vs. 23% who reported inventories “too high” the month before.

Today it’s not unusual to find dedicated training rooms and computers at a dealership, but in 1975 it wasn’t commonplace. At Weaver Tractor Co., which had stores in Woodland and Dixon, Calif., the company had training programs at all levels to help employees improve their value to both the dealership and its customers. The dealership’s training facility included a video tape recorder and monitor as well as a multipurpose wall board. They even had a TV camera that could be taken into the field to film a machine for demonstrations later. 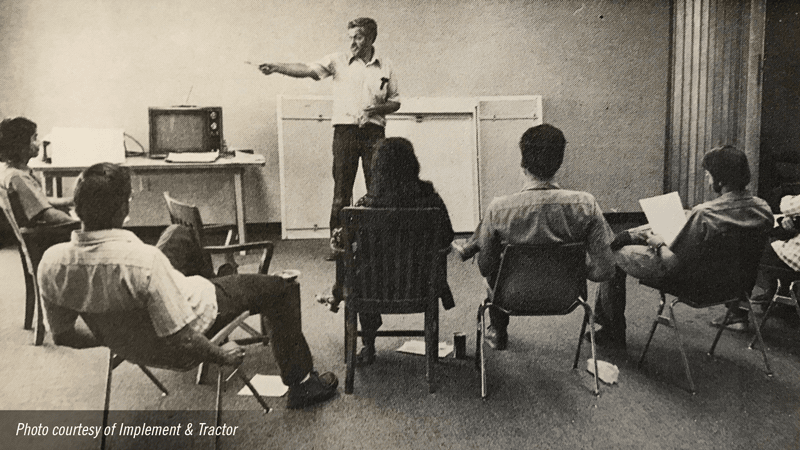 Weaver Tractor was acquired by Valley Truck & Tractor in 2000.

As always we welcome your feedback you can send comments and story suggestions to kschmidt@lessitermedia.com. From all of us at Ag Equipment Intelligence, have a Merry Christmas and a Happy New Year.

[Podcast] As 2018 Closes, Some Ag Optimism Going into New Year