Under 40 Horsepower Tractors — The strong U.S. general economy continued to support sales of this category of tractors. Actual results were 4.5% ahead of our year-to-date forecast. 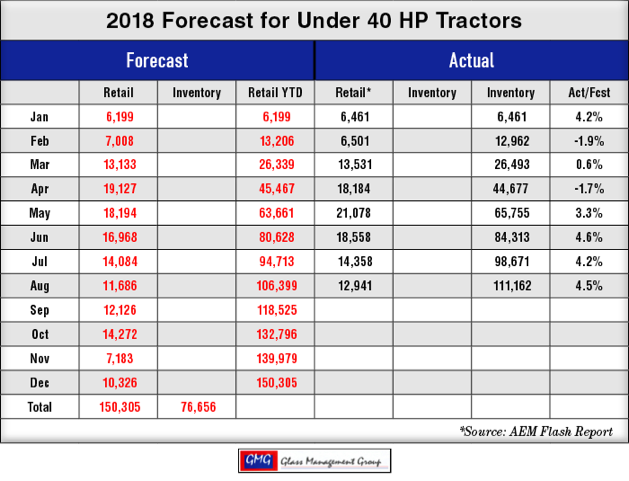 40 to 99 Horsepower Tractors — This category of tractors continued its upward movement and retail sales were 5.4% ahead of our year-to-date forecast. 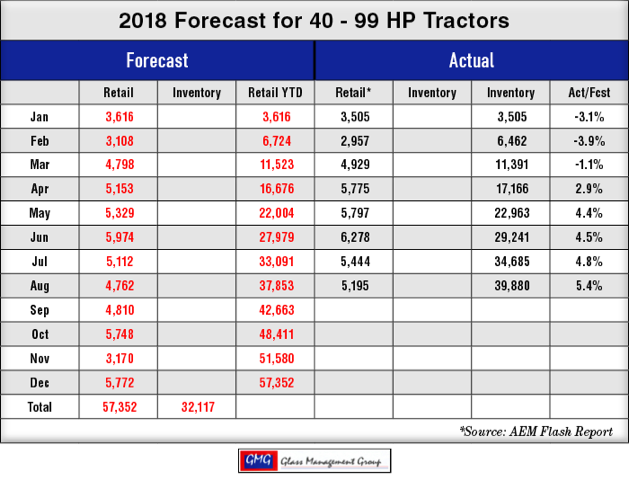 100 + Horsepower Tractors — Strength continues to build within this segment as the actual sales results were 4.1% higher than our year-to-date forecast. 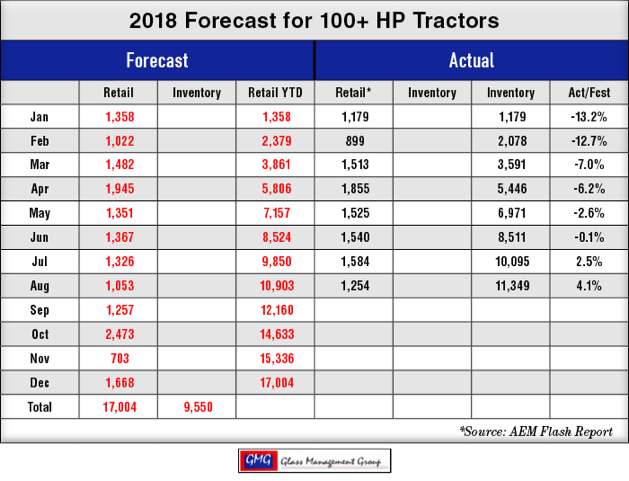 4 WD Tractors — This segment has gained strength each month of the year and closed August with retail sales 6.5% ahead of our year-to-date forecast. 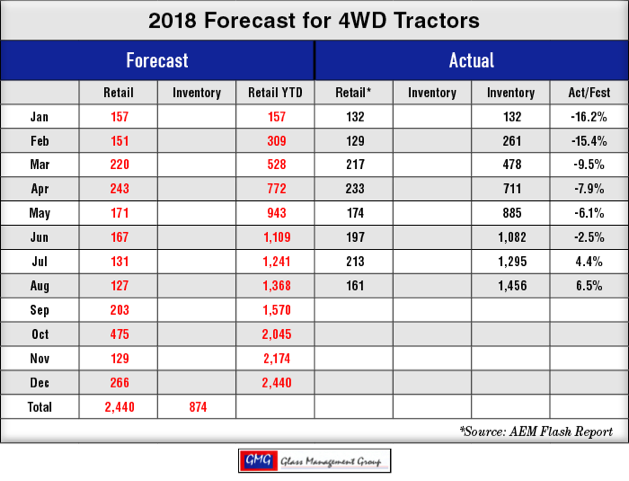 Combines — What tariff war? Combines are on a tear and closed this month a whopping 27.2% ahead of our year-to-date forecast. 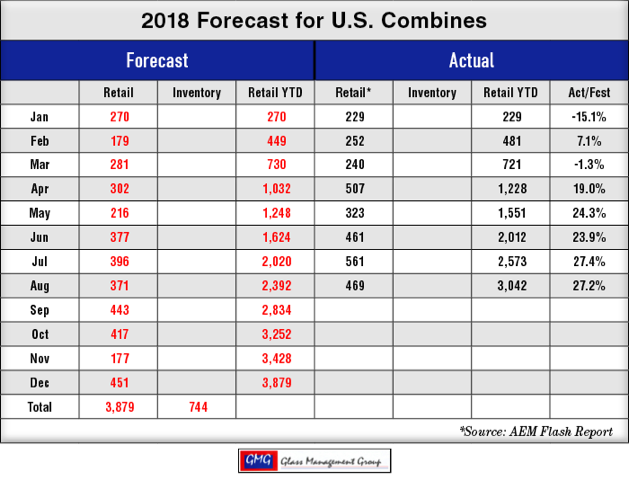 August saw a new agreement with Mexico to replace the NAFTA agreement and even though details have to be ironed out there appears to be some positive movement in that direction.  Negotiations with Canada had begun in August but there has been no real progress with our northern neighbor on a similar agreement and those negotiations continue. Canada’s significant tariff on U.S.-produced dairy products is the current sticking point and could be a difficult one to overcome but there remains pressure on Canada to find some resolution and enter into a new agreement with the U.S.

There is a feeling among some farmers that the China export business has permanently moved to Brazil and will be difficult to regain when the current tariff problems have been resolved. Brazil, however, is engaged in some internal trials that are putting pressure on their agricultural exports these days. The truckers strike in May virtually brought the country to a standstill and the negotiated end of that strike required an increase in freight rates within the country. Some of the larger grain exporters are telling the government that those additional costs cannot be passed on to their customers and is cutting into the exporter’s already slim margins. These are the same exporters who are charging a $1.50 premium over the CBOE prices on soybeans shipped to China. Meanwhile, inflation in Brazil continues to increase each month creating negative pressure on Brazilian currency.

Argentina, historically the third largest exporter of soybeans, has experienced a protracted period of dry weather and a much reduced soybean crop in recent months virtually eliminating their export business for soybeans. Additionally, the country has encountered political turmoil that has resulted in a continuing decline in the general economy. Their soybean export activity declined substantially in the past year and is showing no real progress in the immediate future.

The China market has definitely been damaged by the current tariff activity but, at the present time, it is not completely destroyed. Internal troubles within Brazil and Argentina certainly are not putting those countries in a particularly strong position and U.S. farmers will continue to be a strong voice in this discussion. While the future isn’t bright, it is not dark either.

How Will All of This Affect 2018 Agricultural Equipment Sales?

The principle factor in future equipment sales in the U.S. is based upon the net farm income that 2018 will produce. Our models had projected that to be $59.5 billion in 2018 and that represented a decrease of about 6% from the 2017 levels. The announcement from the U.S. Department of Agriculture concerning the $12 billion aid package for U.S. farmers negatively affected by the current tariff problems with China could bring the total net farm income back to the 2017 levels. The reality is that probably only about 60% of the program will reach farmers in 2018.

Our models suggested last November that 2018 would be a relatively flat market and that some growth would begin to appear in 2019. The larger horsepower tractors and combines have shown some real strength this year and have moved ahead of our original forecasted numbers.

The U.S. general economy continued to grow each month and consumer spending is growing with it. Increasing job growth along with some income increases and the new tax cuts have had the effect of increasing discretionary income and that is very evident in the under 40 horsepower tractor category which is the domain of lifestyle farmers.

Commodity prices are a function of availability vs. demand and U.S. farmers have consistently become more proficient at producing grain crops each year.

The uncertainty that accompanied the current tariff disputes has produced a black cloud over future tractor and equipment sales. In spite of those concerns we continue to see some strength in the larger tractor categories and in combines this year.

Our data base has continued to scream out that there is a base number of tractors and combines replaced each year and those replacement sales will most likely take place in spite of the lingering concerns about export activities. 2018 will most likely close with a flat to slightly higher gain in total units and the possibility of improving sales in 2019 beckons from beyond the horizon.

Steel and aluminum prices will most certainly result in an increase in all farm equipment prices next year but our agricultural economy has been able to overcome those increases in the past and will most likely do so in the future.