Under 40 Horsepower Tractors — WOW! What a month for small tractors. Retail sales soared as confidence in the U.S. economy builds. The beginning field inventory level for February was nearly 1,800 units higher than January. Actual retail sales were 14% ahead of our November forecast.

40 – 99 Horsepower Tractors — Retail sales for this category were down 110 units from the same month last year and the beginning inventory for February was slightly lower than January. The year-to-date total for retail sales closed the gap between actual sales and our forecast, which now stands at 10.8%. 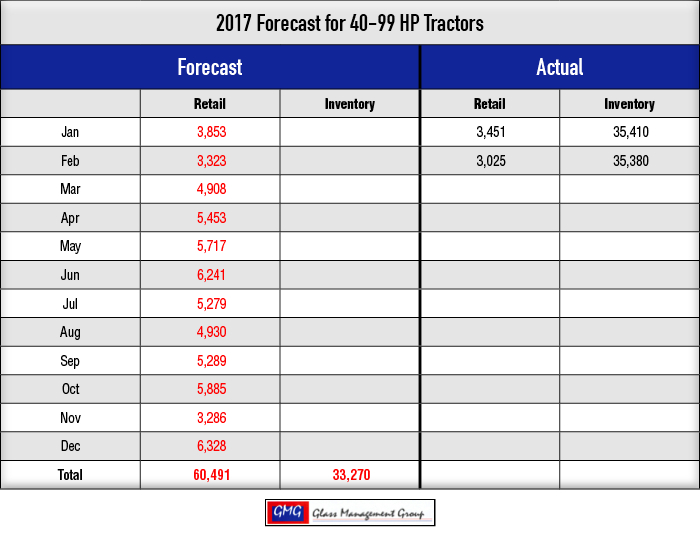 100 + Horsepower Tractors — Retail sales for this category were 263 units ahead of 2016 and the year-to-date retail sales number is getting closer to our forecasted number. Field inventory for this segment has remained somewhat flat for the past year and was down slightly in February. 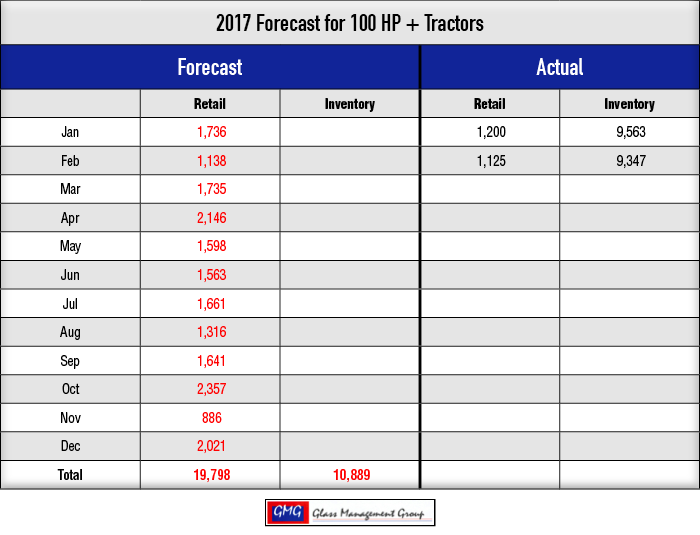 4 WD Tractors — Current commodity prices continue to keep retail sales for this segment of tractors down and February showed retail sales that were down nearly 40 units from February 2016. Field inventory levels for these tractors have been declining for the past year and this month was no exception. Even though inventory is down by about 128 units compared to February 2016, the starting February inventory levels were slightly elevated from the January level. 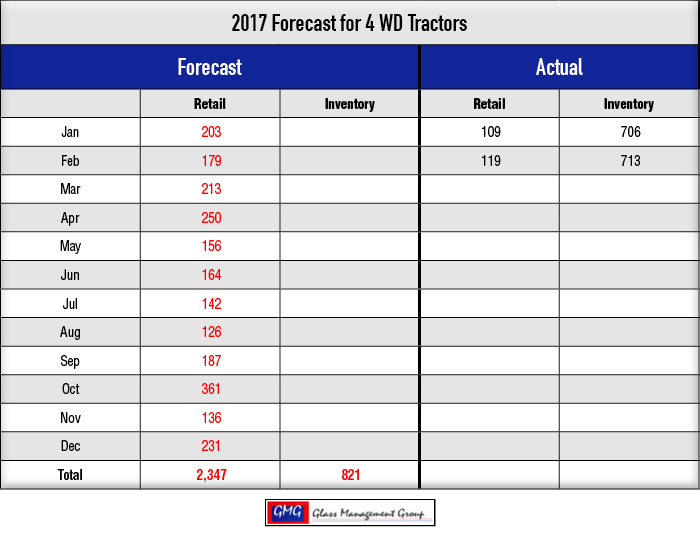 Combines — Retail sales for combines is dismal. The combined number for January and February of this year is below the January retail sales number for last year. Field inventory levels have been declining slowly over the past year and the beginning inventory level for February is down more than 50 units from the same period in 2016. 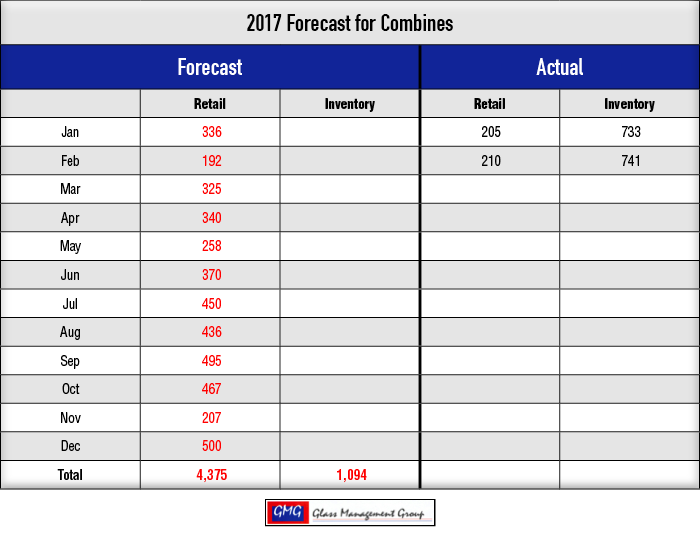 A New Confidence Explodes Across the Nation

There is a renewed sense of confidence within the country these days and the latest jobs report certainly supports these sentiments. This latest report nearly doubled the projected increase in jobs for the month of February and showed an increase in full time positions for the first time in many months. The prospect of relief from federal regulations has produced a glimmer of hope within the manufacturing sector of the economy and that was manifested in that recent jobs report.

What does all this mean for agricultural equipment sales? As most workers begin to see an increase in spendable income, farmers and ranchers will most likely see an increased demand for their products in the coming months. But net Farm Income must rise in order for new equipment orders to rise.

The Kansas City Federal Reserve Bank reported in their most recent Agricultural Financial Databook that farmers and ranchers within their region continue to maintain a tight grip on their pocketbooks. Machinery loans were reported to be down 13% from last year and the interest rates charged for those loans have increased by nearly one-half percent. The average maturity of these loans has moved from 36 months in 2016 to 42 months currently.  Outstanding farm debt has increased by about 5% but the extended maturities contributed greatly to that figure.

So, if there is renewed optimism across the land why are farmers’ fortunes looking a bit bleak at this time? The financial data that the Kansas City Fed reported is past history and the euphoria of the jobs report represents the future.

According to the USDA, corn represented 36% of the total cash crop for U.S. farmers in 2016.  Domestic demand for corn has remained somewhat flat while exports were up 17% over the average of the 2008-2015 marketing years. Corn prices continue to be somewhat weak at present and are still below the production costs for many farmers. USDA expects corn inventories to rise in 2017. This will certainly have an impact on purchases of machinery by corn farmers in the coming months.

Soybean production represented approximately 22% of the total crop cash income in 2016.  Exports were strong last year and were up 150% in August 2016 alone. Brazil is our largest competitor in soybean production and along with the U.S. accounts for approximately 80% of the world exports of the crop. Exports are vital for both countries since both produce about twice their domestic soybean demand. The largest customer for both countries is China, which imports nearly 10 times the volume that is produced domestically. Soybean prices are expected to remain above the $10 per bushel range for the balance of the year.

Brazil has suffered an extended drought in the past few months and that has allowed the U.S. to increase exports to fill the worldwide demand. The uncertainty of the Trump Administration’s trade plans has clouded the market for the present, but there remains an optimism for successful trade renegotiations.

The growing general economy in the U.S. will most certainly have a profound effect upon the smaller tractor sales in the coming months. While farmer’s net worth is declining, most remain in a rather secure financial position as they exercise caution in their purchases on the farm. The vast majority of U.S. farmers have an off-the-farm income source and that will see some increases as the economy continues to grow in the coming years.