In today’s newscast we discuss big changes in CNH Industrial’s leadership, dealer consolidation and changes to Ag Equipment Intelligence’s Big Dealer Report, the Bayer-Monsanto merger and what it means for the ag industry and updates to the 2018 Farm Bill.

Spader Business Management's team of industry experts provide business insights, ideas and concrete tactics through training and consulting. Generations of business owners and operators have also relied on our 20 Groups to capitalize on new opportunities and industry trends by learning directly from their peers. Learn more at spader.com.

Last month news broke that Jim Walker would be retiring as Case IH Vice President of North America and that Richard Tobin resigned from his position as CEO and director of CNH Industrial to take the CEO job at Dover Corp. Now, more news of leadership changes is coming out of CNH Industrial.

According to an April 12 report in Bloomberg, Sergio Marchionne will be retiring from Fiat at the end of the year. “This is clearly the end of an era and maybe more, as Marchionne is not just the mastermind behind FCA, he is FCA,” Giuseppe Berta, a professor at Bocconi University and former head of Fiat's archives, told Bloomberg. “After he is gone, FCA will have to change, and this opens room for a big transformational deal.”

Marchionne masterminded the reorganization of Fiat that created CNH Industrial as a separate standalone company.

Andreas Klauser, brand president of Case IH a board member of CNH Industrial, has been appointed the CEO of Palfinger. He will assume his new position on June 1. Palfinger is an Austrian manufacturer of hydraulic lifting, loading and handling solutions and products.

News broke last week that, it appears the mega-merger between Bayer and Monsanto will happen, creating another diverse giant in the ag industry.

The Germany-based Bayer had launched data-driven platforms including xario and Zoner in recent years. But in an increasingly crowded data management service field, those brands got little if any attention in North America.

But even if Bayer sheds some of its current digital farming assets, the acquisition of Monsanto could heighten the debate over how farm data is collected and manipulated by companies, potentially to influence purchasing decisions by farmers.

Monsanto would bring with it access to the Climate Corp., and its FieldView platform. Monsanto has aggressively sought to expand its data presence and last year announced that FieldView had more than 120 million acres and 100,000 users across the U.S., Brazil and Canada.

Ag attorney Todd Janzen notes that the merger, and others like it, could increase control over the decisions that are made on the farm.

“I think there should be concern with the large market share and power these seed and chemical companies are gaining through these mergers and then bundling their data services with their seed and chemical sales. You could have a situation where farmers are required to use a specific data platform if they want to use that seed or fertilizer company’s products, which would be an anti-trust problem, so hopefully we don’t go there.”

Consolidation is an increasingly common part of the ag industry, but in the case of data services, choice is a good thing, adds Janzen. However, he does point to a potential “silver lining” in that the formation of data giants could create opportunities for start-ups and smaller service providers.

The number of “big” North American farm equipment dealer ownership groups is down compared to this time last year. According to Ag Equipment Intelligence’s Big Dealer Report, there are 187 “big” dealers, compared to 193 on last year’s list. 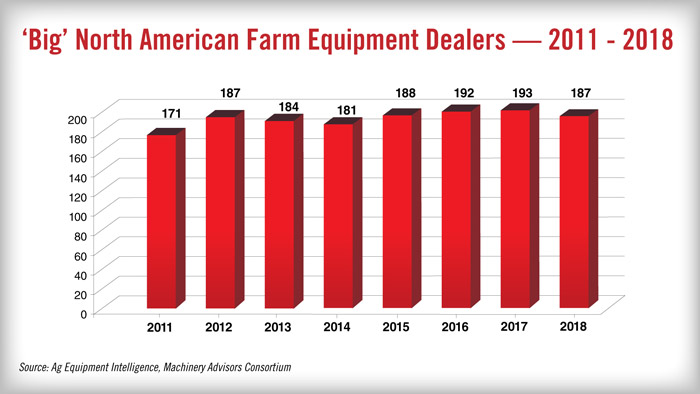 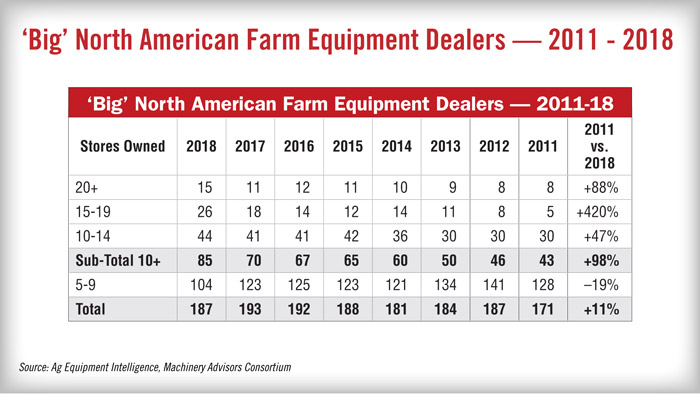 Ag Equipment Intelligence and the Machinery Advisors Consortium began compiling the report in 2009 and first published the “Big Dealer” report in 2011. During the period of 2011-18, “big” farm equipment big dealerships, which are defined as those organizations that own and operate 5 or more farm equipment dealer locations, have grown by more than 11%. But this doesn’t accurately reflect what’s really happening within the farm machinery retail distribution channel.

Overall, the percentage of dealers in each of the 4 different size categories — 20-plus stores, 15-19 stores, 10-14 stores and 5-9 stores — held steady during the first 7 years of the study, but significant shifting has taken place between the 2017 and 2018 studies.

The real story, though, is in the second tier of big dealer groups. Dealership that own and operate 15-19 store locations has grown by more than 400% between 2011-18. Taken together, dealership groups with 10 or more stores have grown from 25% of the total big dealer group in 2011 to 45% in the past year.

The complete “Big Dealer” Report will be published and sent to Ag Equipment Intelligence subscribers later this month.

Ag committee Chairman Mike Conaway says once the bill goes to the floor he anticipates it will be a relatively open process. 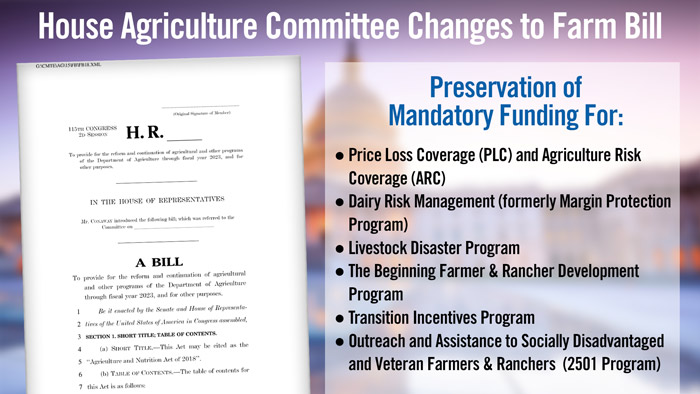 Some highlights of the bill include, Price Loss Coverage and Agriculture Risk Coverage that are maintained and strengthened. In addition to the greater support of PLC and ARC options being strengthened, the bill also allows farmers to make a new election. PLC is strengthened by allowing reference prices to adjust when markets improve and by allowing farmers affected by long-term exceptional drought during the previous opportunity to update their yields.

ARC is strengthened by using actual yields collected by USDA’s Risk Management Agency by separately calculating revenues for dryland and irrigated land and by using the physical county of the farm when determining ARC benefits.

Dairy policy was also maintained and strengthened. The Margin Protection Program is being renamed the Dairy Risk Management Program. Under this program, the first 5 million pounds of milk production on a dairy is made eligible for higher coverage levels at lower premiums. Milk production not covered under DRM is made fully eligible for a comparable crop insurance policy. 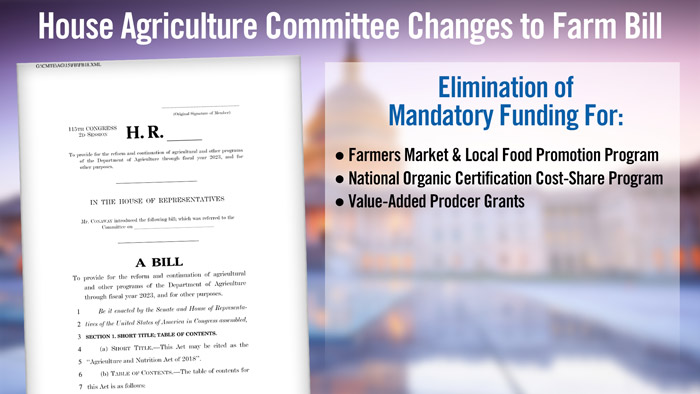 The bill also provides strong incentives for providers to offer quality broadband service to all of rural America, particularly harder-to-serve areas of the country. This was one of the main talking points dealers stressed during the Equipment Dealers Assn. Fly-In in Washington, D.C. last month.

Who’s the Winner in the Bayer-Monsanto Tie Up?

If published reports turn out to be accurate, it looks as if Bayer’s deal to acquire Monsanto will finally be completed. According to an April 9 Wall Street Journal report, the U.S. justice department will allow the acquisition after Bayer agreed to sell off additional assets, in all likelihood to BASF, which competes with Bayer. The European Union gave its conditional approval in March, again after Bayer sold off more than $7 billion in assets to BASF. When completed, the deal would make Bayer the world’s biggest supplier of pesticides and seeds for farmers.

This is the third mega-merger on the consumables side of the ag business in the last 2 years. Earlier, Dow and DuPont announced they would merge. Also, China National Chemical Corp., often referred to as ChemChina, acquired another ag giant, Syngenta.

When the dust finally settles who will be the real winners of the merger mania that’s been dominating the ag business in the past few years?

Frank Lessiter, editor of No-Till Farmer, doesn’t think it will be the farmers.

A big question is who are going to be the winners and losers in the recent Bayer-Monsanto merger in the ag chemical field and what might the future hold for similar deals in the farm equipment world.

Over the last 18 months, we’ve seen three major deals take place in the worldwide ag chemical market. Syngenta was bought by China’s National Chemical Corporation. Dow and DuPont also merged, and it appears that all the legalities in North America, Europe and Asia are in place for the Bayer buyout of Monsanto.

So instead of six major seed and ag chemical companies, three firms will be handling the bulk of the business worldwide.

As is the case with most mergers, there are winners and losers. The losers are farmers who will have fewer choices and will end up paying more for seed and pesticides.

The big winner may be BASF who is purchasing a number of assets Bayer is being forced to sell to gain government approvals for the deal. Besides the Bayer seed business, BASF is taking over the Liberty herbicide business, which is the major herbicide competitor to Monsanto’s Roundup.

With this much consolidation on the consumables side of the business, could the ag equipment market experience similar consolidation? Here’s what Lessiter thinks.

With tough times and major changes taking place in much of agriculture, could we see similar deals in the farm machinery world? It’s all speculation, but here are three deals that might make sense.

Number 1… Kubota has their sights set on becoming a major player in the North American market and is already adding higher horsepower tractors to their line. They might be interested in adding combines and sprayers to go along with the tillage tool, planter and drill lines they’ve added in recent years.

Number 2… Claas is already bringing tractors into the North American market from Europe. To go along with their hay tools and combines, adding planters, drills and tillage equipment might help them become a full line player in North America.

Number 3… My third choice that might see major North American changes would be Mahindra. They are a huge player in Asia and other parts of the world not only with farm equipment, but also with cars, trucks and other consumer products. While they’ve concentrated on tractor sales in North America, they already have a number of ag equipment lines in other areas of the world.

Mahinda is sitting on huge piles of cash. They likely have the means to make any deal work that appeals to them.

Over the past 18 months, we’ve seen three major consolidations take place in the ag chemical field. Will the next 18 months bring similar deals in the farm equipment market? Nobody knows. 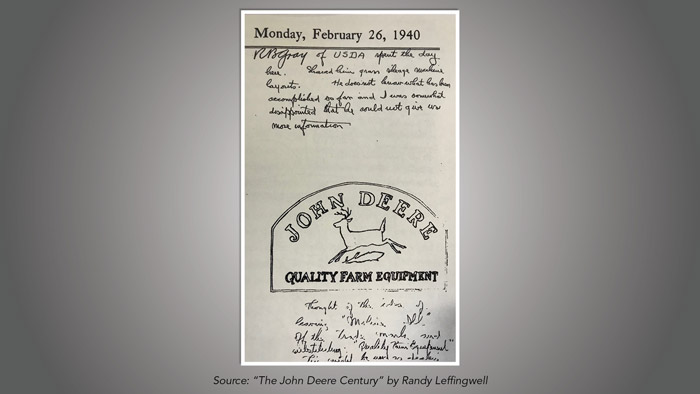 Early iterations of the John Deere logo said “Moline, Ill.” under the image of a deer. In 1940 Theophilus Brown, Deere’s superintendent at its Marseilles spreader works in East Moline, suggested a change. In late February, Brown proposed modifying the company logo for dealers by removing “Moline, Ill.” and replacing it with “Quality Farm Equipment.”