In today’s newscast, we have a sneak peak at this year’s Big Dealer Report from Ag Equipment Intelligence, a look at how some dealerships are attaching value to agronomic services, a look at how European ag equipment dealers feel about the current business climate and the results of a survey on landscapers equipment purchasing plans for 2017.

The ongoing sluggishness in the sales of farm machinery has not slowed the consolidation of ag equipment dealers in the U.S. and Canada.

As they have since 2011, Ag Equipment Intelligence editors and the Machinery Advisors Consortium are compiling the 2017 Big Dealer report. And the list of “Big Dealers” continues to expand. Big Dealers are defined as those dealership groups that own and operate 5 retail locations or more. 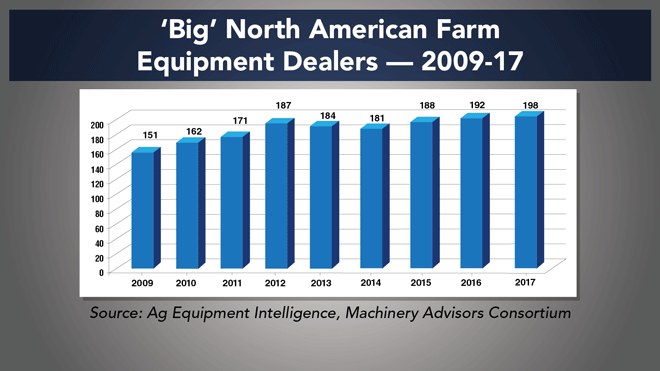 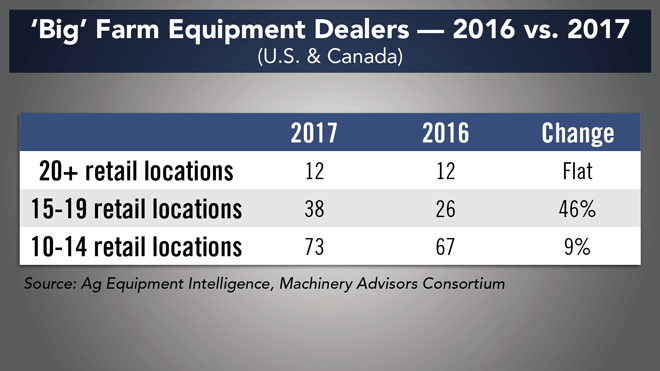 But the biggest change for 2017 came in the group of dealerships operating 15 stores or more. This category jumped from 26 dealer groups in 2016 to 38 dealerships this year, an increase of 46%.

The biggest dealers, those operating 20 or more stores remained flat at 12.

The complete report with further breakdowns, analysis and complete listing of “Big Dealers” will be released to subscribers next week.

This week’s Dealers on the Move include Pattison Agriculture, Brandt Holdings and MM Weaver.

John Deere dealership group Pattison Agriculture has acquired Nykolaishen Farm Equipment, which has 2 stores in Kamsack and Swan River, Saskatchewan. This brings Pattison’s total locations to 19 throughout Manitoba and Saskatchewan.

AGCO dealer MM Weaver of Leola, Pa., has agreed to acquire B Equipment in Waynesboro, Pa., effective May 1. This adds a second location for MM Weaver.

It’s no secret that in recent years more dealerships — either by choice or by directive — are incorporating agronomic services into their businesses. Those who have been receptive to adding prescriptive farming options to complement machinery and component sales, have gradually been able to gain traction with customers.

But even as the ag industry transitions to more agronomic-based offerings, breaking into this business can still be a hard sell for equipment dealers — at least initially. Early entry into agronomic services was seen as more of a burden than a benefit, says Bryan Peterman, Integrated Solutions Manager with Atlantic Tractor, an 11-store dealership serving northeastern U.S.

He admits that the early addition of a staff agronomist was done out of obligation, not necessity. But Peterman says the dealership gradually began to see the potential with this side of the business, particularly as a way to bolster its data management service offerings.

“What I’m seeing in the transition right now is that that is helping to support the data management side of our business. The customers who didn’t have a real value in maps — harvest maps, seeding maps, fertilization maps — whether it be them or their ASP (ag service provider), we’re now adding value to the farm to help manage that agronomy side. So whether it’s our agronomist or a farmer’s agronomist, it still supports our IS department and the packages better because we’ve just used them to install value of maps, proper maps and information for managing their operation.”

Peterman admits that one initial concern from salespeople was stepping on the business of local seed and fertilizer retailers already in the agronomy space. But he says the dealership has been able to effectively partner with those service providers by better supporting the equipment and technology behind the agronomic decisions customers are making.

CEMA, a European ag industry trade association, released its April Business Barometer Report on April 12. The general business climate index improved again in April, reaching its highest level since 2012. According to CEMA’s survey of EU ag equipment dealers, 53% now expect higher turnover in the next 6 months. This compares to 52% in the March survey and 40% in February. 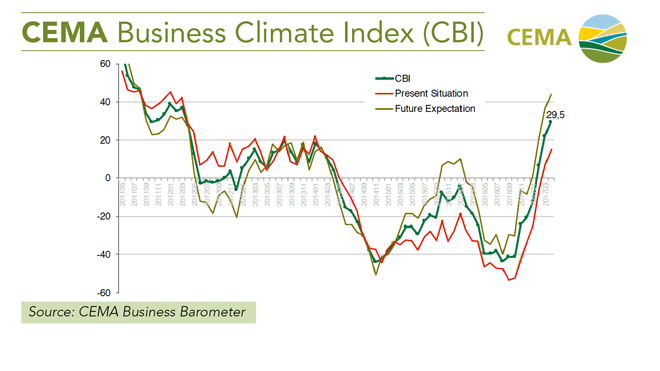 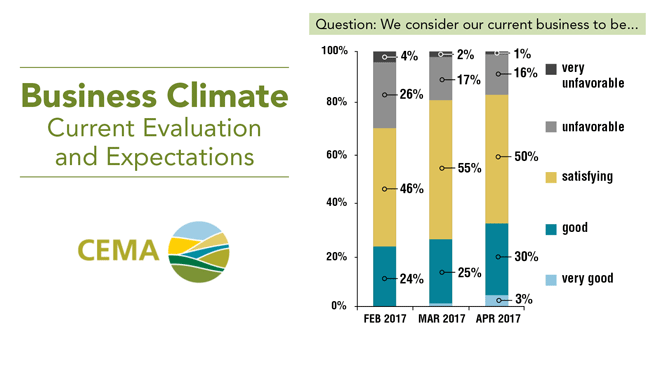 When it comes to dealers sentiment about the current situation, 50% of respondents said their business to be satisfying, with 33% reporting it is either good or very good. These results are similar to North American dealers, who according to Ag Equipment Intelligence’s most recent Dealer Sentiments & Business Conditions surveys reported being more optimistic than the month prior for the first time in over 3 years.

Current dealer inventories of new equipment are below the 3-year average in all European countries except Poland, according to the survey.  CEMA notes that expectations for growth in the next 6 months are highest in Spain, CIS and Poland, followed by Germany, where orders booked are said to be increasing.

In a note to investors, Ann Duignan, analyst with JP Morgan, said “France, the largest single market, is still among the ‘worst evaluated’, though dealers are ‘significantly less pessimistic’ compared to recent months. However, some of the optimism among UK dealers has subsided; 35% consider their situation as positive vs. 65% just two months ago.

But the one dark cloud that still seems to be hanging over the industry is the impact that the high volume of equipment leases could have on the used machinery situation. One dealer commented, “Customers have grown accustomed to leasing programs and it will take some time for customers to choose buying over leasing.”

In his Quarterly Used Values Index report for the first quarter 2017, Greg Peterson, more commonly known as Machinery Pete, noted little impact as the result of lease returns. Regarding the used equipment situation, Peterson said, “So far we’re not seeing used values affected materially by the wave of tractors coming off lease back into the used market.”

He added that during his recent travels he’s “definitely noticed growing lines of off-lease tractors sitting on [dealer] lots. But it’s somewhat strange, the dealer isn’t, so to speak, ‘on the hook’ for all of them, and this of course affects how they are thought about, how they are marketed, how aggressively they are pushed.”

In fact, he said, he’s seeing growing volumes of used tractors being leased by dealers. “This plays well into the current profit-challenged environment for farmers. Finance companies are having success selling off-lease units back to dealers who are positioned to be aggressive buyers.”

Peterson added, “So far I’m still not seeing a wave of off-lease units washing up for sale at auction.”

“I couldn’t believe the very, very strong auction sale prices I saw roll in from all points in North America, on a wide range of used equipment, but most notably on very large, very late model items. That’s just exactly the segment of the used farm equipment market that has been under so much pressure going back to spring 2013 when commodity prices fell from their lofty perches,” he said.

Landscape contractors, one of the prime market segments for rural lifestyle and outdoor power equipment dealers, continue to show strong growth potential in 2017. 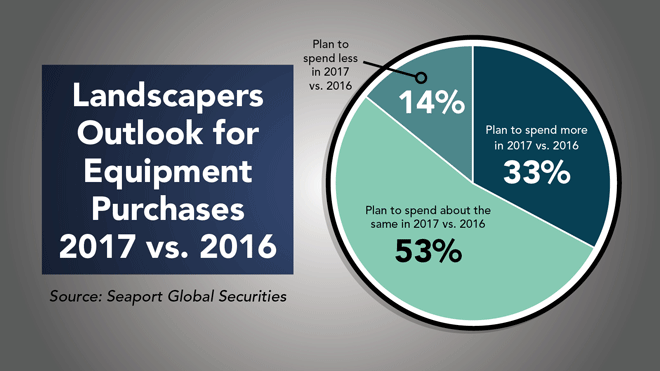 According to the results of an exclusive survey by investment bank Seaport Global Securities, more than 80% of U.S. landscapers surveyed are forecasting revenue growth in 2017. Landscapers also anticipate spending more on equipment than they did last year.

Summarizing the survey results, Michael Shlisky, machinery analyst at Seaport Global who conducted the survey and analyzed the results, said, “39% of landscape contractors expect to see revenue growth of 10% or more in 2017, up from 33% in the SGS December survey.

“About 31% expect to see revenue growth of 5-10% this year, relatively unchanged from the last survey, while 14% expect growth of 2-5%, which is down from 18% 3 months ago. Roughly the same percentage of respondents, about 18%, expect a flat or down year vs. 3 months ago.” 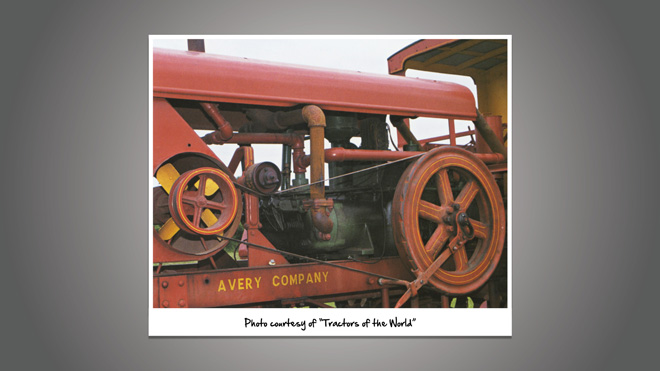 Between 1910-1915, the market for heavyweight tractors in North America grew rapidly as more land was plowed for wheat. In 1913, Avery introduced its 40-80 model tractor to compete in the sector. Weighing 10 tons, it was ruggedly built but also had a number of conventional design features. The power unit was a horizontally opposed 4-cylinder, a popular design at the time as the cylinder movements helped to reduce vibration. The Avery’s gear shift mechanism was more unusual though, consisting of a sliding frame that allowed the driver to change the drive-shaft pinions manually when selecting one of the two forward speeds. It was awkward to operate and eliminated any hope of a slick gear shift.

Ranks of the 'Big Dealers' Continue to Grow