The latest episode of On the Record is now available! In this week’s program, we take a preliminary look at the 2021 Big Dealer Report. While the number of dealers operating 5 or more ag locations only increased by 1, the total number of stores big dealers operate was up by 5%. In the Technology Corner, Jack Zemlicka talks with Michael Boehlje with Purdue University’s Center for Commercial Agriculture about the shifting skillset for precision specialists. Also in this episode: the semiconductor shortage and whether it will impact ag, a look at the Biden Administration’s infrastructure bill, New Holland’s new methane-powered tractor and an improvement in ag exports to China. 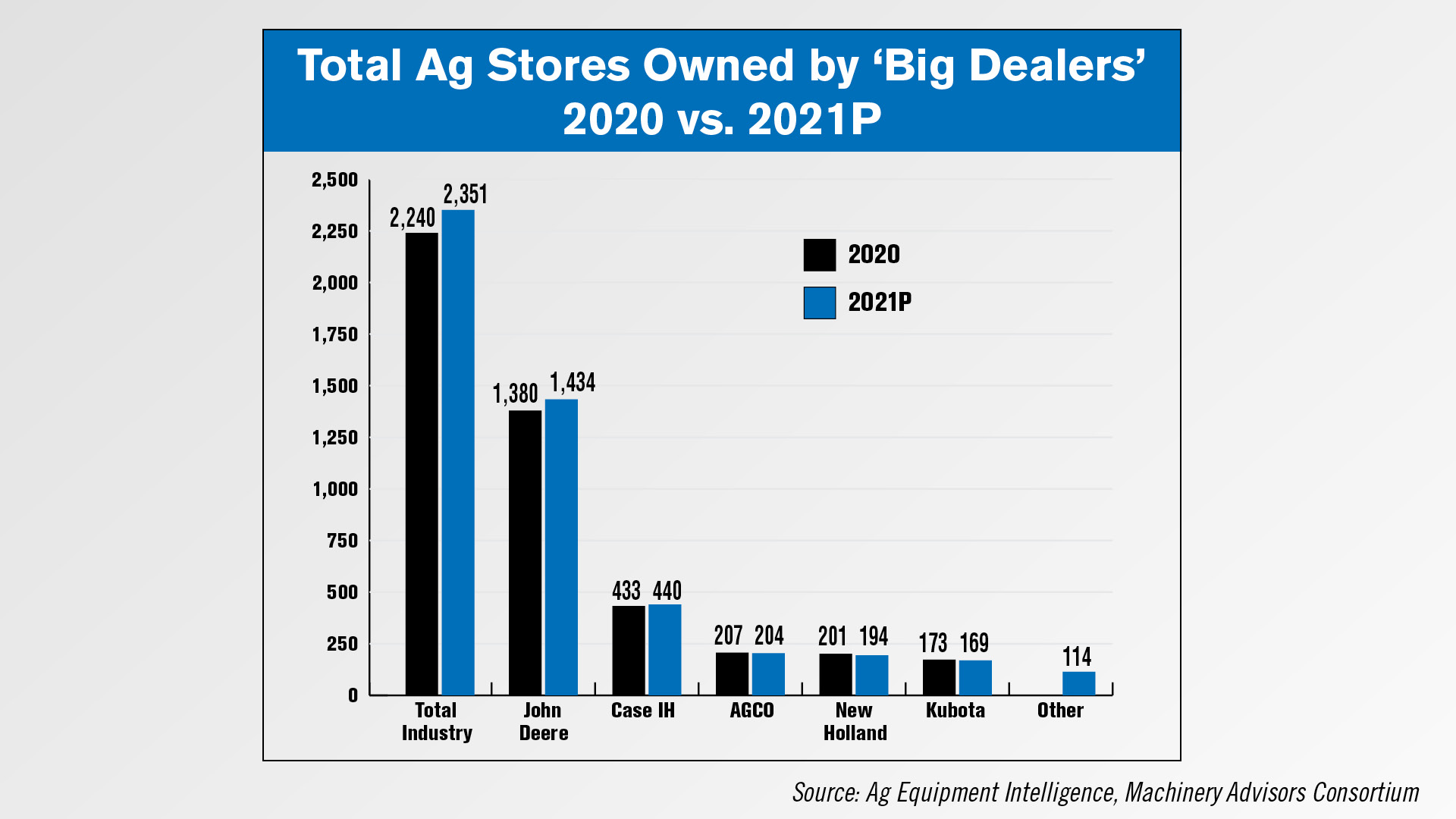 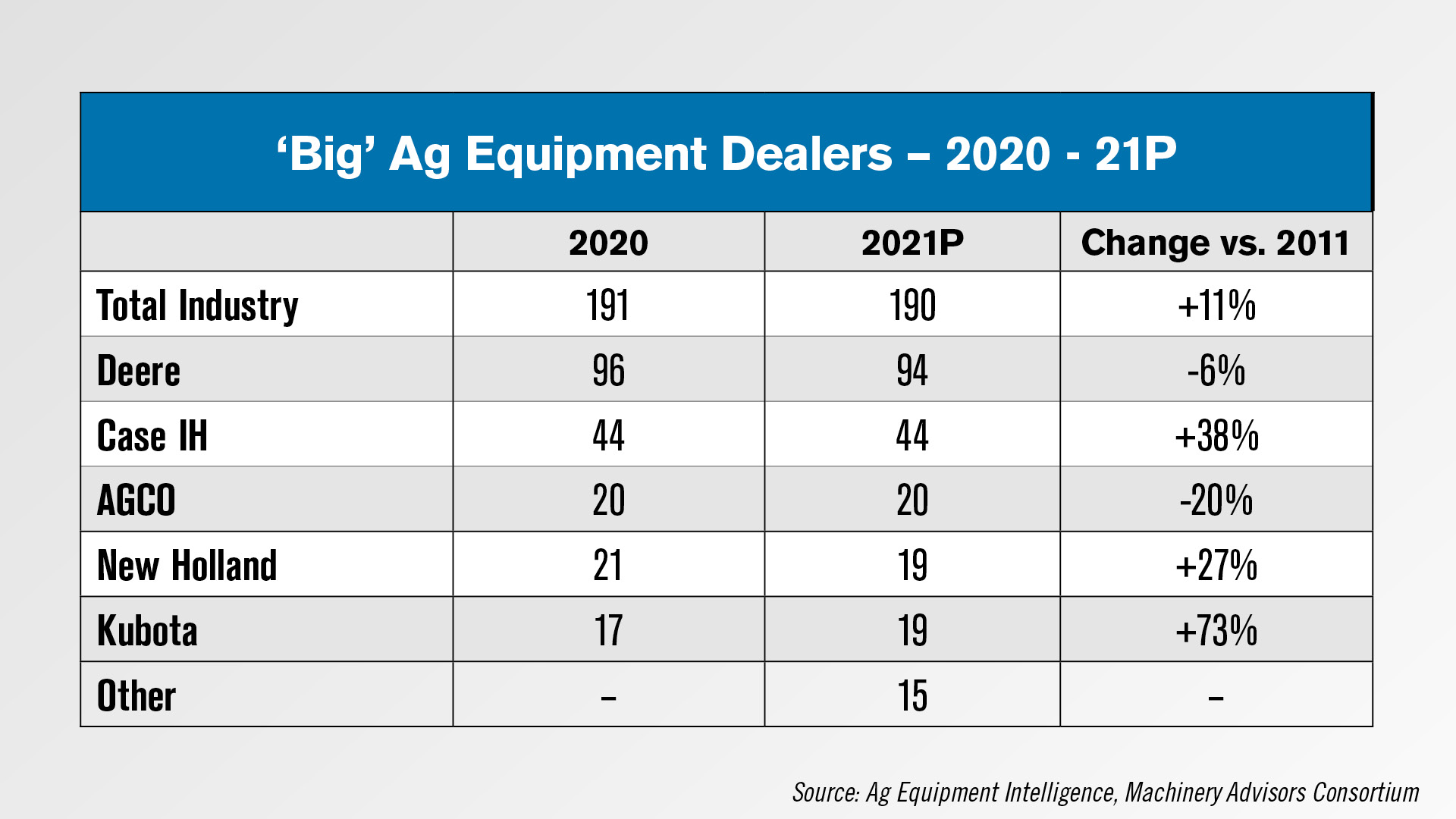 As of the most recent report, 33% of all the industry’s ag store locations are owned by big dealers, up from 32% in last year’s report. This represents a more than 50% increase from the 2011 report, when only 21% of all ag stores were part of big dealer operations.

The complete 2021 Big Dealer Report will be released later this month.

This week’s Dealer on the Move is Nebraska Harvest Center. The Claas dealer announced plans to open a fifth location just east of Columbus, Neb. Construction has already begun and it’s expected to open for business as early as September 2021.

Robotics and automation are far more than buzz words in agriculture, with companies engineering scalable solutions for farm fields of the future. While these technologies will be valuable tools for streamlining predictable farm tasks, automating creative troubleshooting and technical intuition — skills often associated with precision specialists — will be challenging.

Michael Boehlje with Purdue University’s Center for Commercial Agriculture acknowledges that the unpredictability of precision service and support will be blended with machine learning capabilities to define the skill sets needed from specialists in the future.

“What we see happening is some changes in the skill sets within dealerships as well as farming operations. Where they are going to have people who are either internally trained and put into a position to do the kinds of things we’re talking about in terms of automation and precision technology in general, and we’re developing outsourcing capacity. Some farmers are finding it’s better to have somebody else help them with their accounting or legal work. We’re seeing that same industry developing with providing data analytics and assessment and prescription development, to help farmers on their operation. It’s going to change dramatically the way we manage farms and the skill sets, as well as within dealerships. The business opportunity for dealerships is providing now those services to farmers who are increasingly willing to share the information and the analysis and need the analysis assistance.”

Boehlje adds that the role of precision specialists will shift in terms of prioritized skills, to accommodate the emerging efficiencies automation and robotics will provide.

The semiconductor shortage, which was brought on by increased demand and a disruption to steady supply chains brought on by the COVID-19 pandemic, have slowed automobile manufacturing, with both General Motors and Ford announcing recently they will temporarily shut down several factories in North America as a result.

Intel CEO Pat Gelsinger was recently quoted in The Washington Post as saying the company plans to boost production of automotive chips within 6-9 months, but it could take a couple of years to fully address the shortage. To ensure more domestic chip supply in the long term, the Biden administration is proposing spending $50 billion to subsidize semiconductor manufacturing facilities. 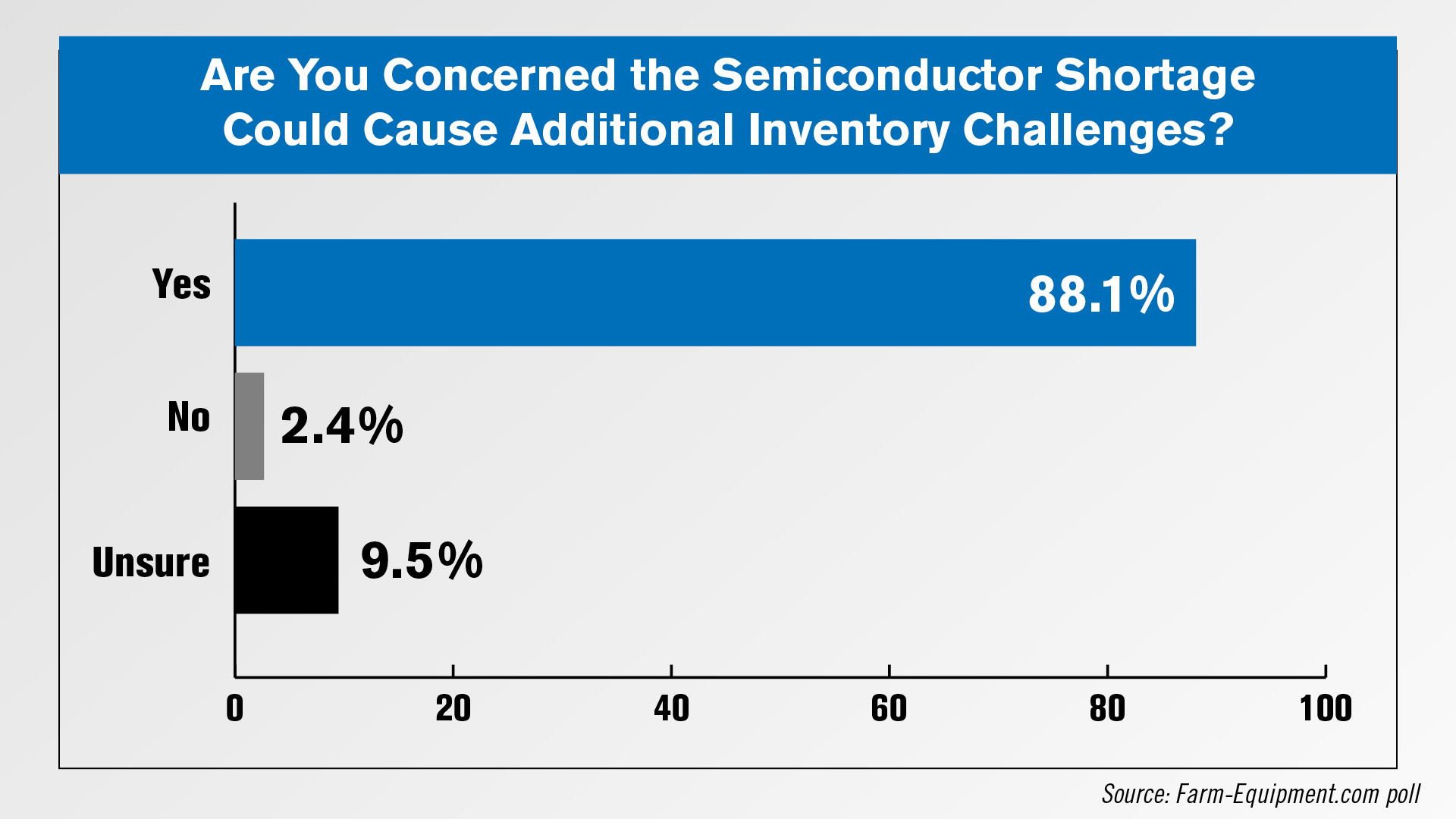 A Farm Equipment poll asked “Are you concerned the semiconductor shortage that’s impacting auto manufacturers could impact ag equipment production and cause additional inventory challenges?” Overwhelmingly, respondents said yes (88.1%) they were concerned the shortage could cause additional inventory challenges. Just 2.4% of respondents said no and another 9.5% were unsure.

After unveiling its first production unit at Agritechnica 2019, New Holland has announced it will launch its T6 Methane Power tractor by the end of 2021. Marketed as the world’s first methane-powered production tractor, the T6 Methane Power features 125 PTO horsepower and the ability for farmers to use materials like animal waste to generate biomethane as fuel. The first production units will be shipped to select customers in Germany, France, Italy, the UK and Benelux, with plans to bring the tractor to North America in 2022.

Ag Equipment Intelligence sat down with Mark Howell, global product manager, alternative fuels & telehandlers at New Holland Agriculture to explain who the T6 Methane Power will be marketed toward in North America.

“Over in America, your big dairies are enormous. So not only have they got a lot of waste that they need to process, they’ve also got a lot of tractors that are all based on the farm. They don’t go anywhere. They just work around with a loader on, they can regularly refill. There are so many reasons why North America is a really good, has massive potential for us. But as a side stream, we’ve also got those guys who are the on-highway contractors who can access on-highway fuel. So it’s like a parallel stream. There’s these big dairies and big swine operations who are collecting the waste which we can approach, but there’s also the guys who have access to the fuel because they’re working a non-ag application, shall we say? They can just go on-highway and just pick up the fuel or bring the fuel.”

Howell adds that New Holland will focus its initial efforts with the T6 Methane Power in the U.S. around farms with the largest biogas recovery projects in the country.

What Biden’s Infrastructure Bill Means for the Ag Equipment Industry

The Assn. of Equipment Manufacturers pointed out in a later press release how the bill will impact rural communities, particularly focusing on the commitment to repairing bridges and boosting broadband availability. We sat down with Kate Fox Wood, AEM’s senior director of government relations, to get more details on what benefits ag equipment manufacturers can expect from the plan.

“Several things that we appreciate, that he has outlined in his proposal is just his emphasis on surface transportation. He's outlining over $600 billion for investment in upgrading U.S. roads highways. He takes a particular focus on bridges, which we applaud in rural America, in particular. There are thousands of deficient bridges that impact the ability for our manufacturers operating in rural communities to move whole products.

It's amazing to hear about some of the logistic challenges that they have to deal with and the inefficiency that that brings and getting product to market. And that doesn't even crack the surface when it comes to some of them are producer groups that are members, product support.

So very pleased to see the bridge focus, very pleased to see the hundred billion that he has outlined for broadband. Broadband continues to be a key asset, it is certainly included in the equipment manufacturers, definition of infrastructure. There's a lot of back and forth going on about what that means and for equipment manufacturers that definitely includes broadband, wireless connectivity across crop land and ranch land is critical to ensure that equipment operates efficiently and certainly a part of the new rural economy and keeping things running for that.

The other thing that we were really pleased to see is the commitment to the electric grid that he's making. I think there's implications for that. We've seen what's happened across the country. This winter in Texas and things like that when you have, um, unpredictability with the electric grid. So applaud that focus.”

Fox Wood added that, going forward, AEM is hopeful the Biden administration will look to address other key issues in the equipment industry, including the ongoing semiconductor shortage and workforce development.

A report from Agricultural Economic Insights shows U.S. ag exports to China began to recover in 2020. 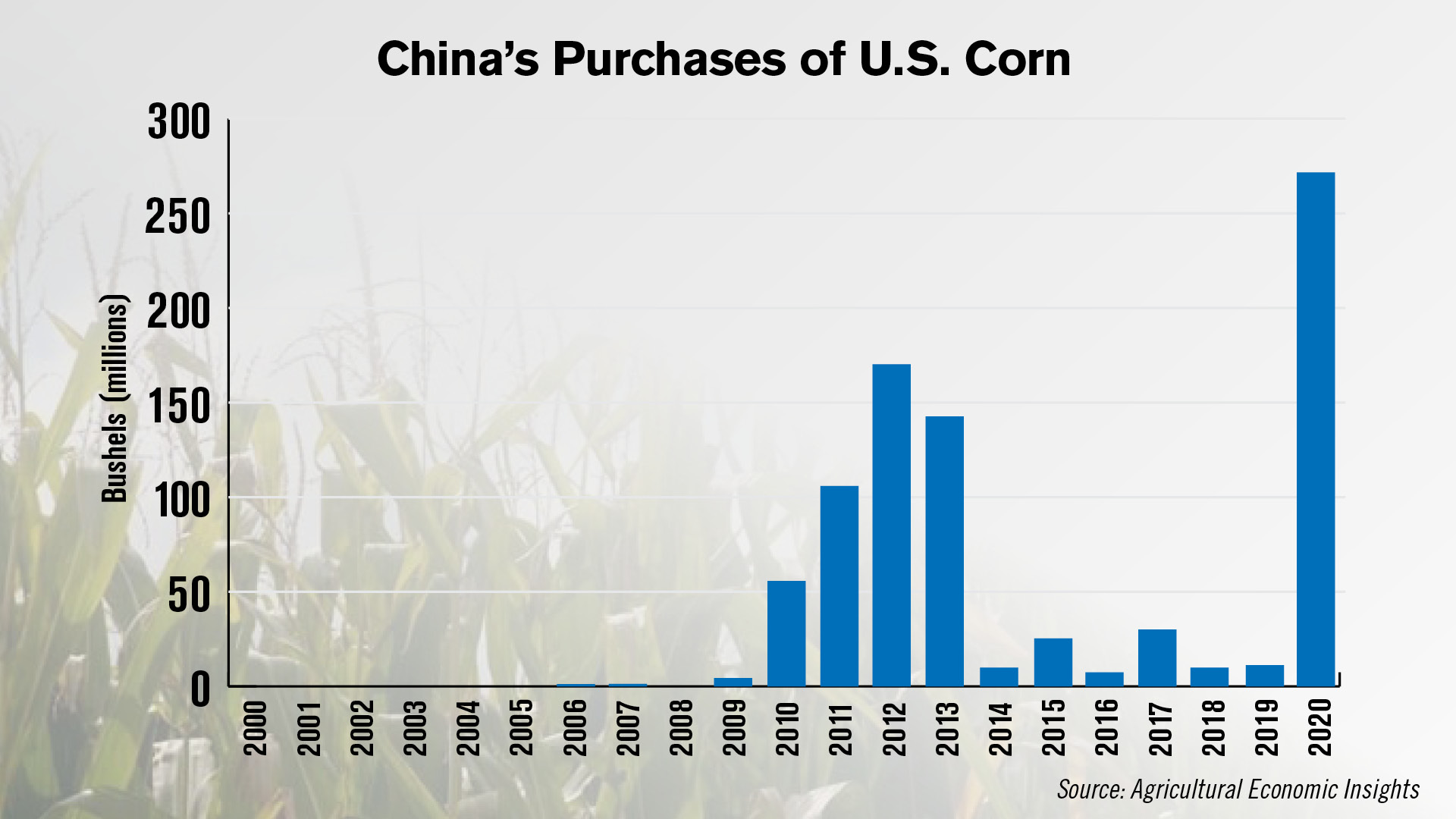