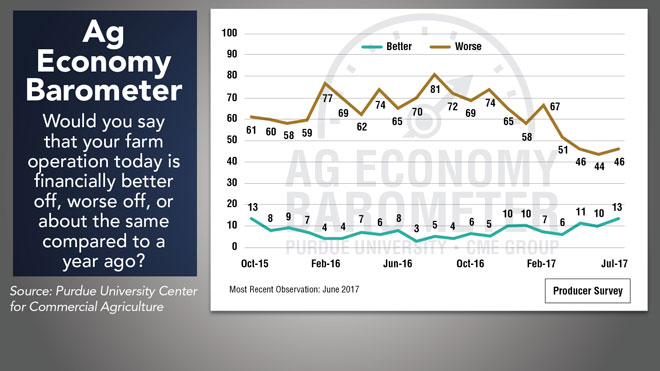 Ag producers are feeling better about their finances. According to the Purdue University and the Center for Commercial Agriculture’s June Ag Economy Barometer survey, 13% of producers would say their farm operation is better off financially than it was a year ago. This is the highest “better” reading since October 2015.

The report authors — James Mintert, David Widmar and Michael Langemeier — believe this is part of a long-term trend. They say, “In June 2016, just 3% of survey respondents felt their operations were financially better off than a year earlier. That percentage increased to 10% last fall, then declined somewhat in early winter before rebounding to its current reading of 13%, the highest reading since we began surveying producers in October 2015.”

A similar trend has emerged with the percentage of producers indicating their farms’ financial situation has declined compared to a year ago. In the June survey, 46% of farmers indicated their financial position was worse than a year earlier, similar to May’s reading of 44% but considerably improved from the 67% recorded as recently as February. According to the report’s authors, “The shift in perspective compared to last summer is even more noticeable as 81% of respondents in August 2016 said their farm was financially worse off than in the prior year.”

This week’s Dealers on the Move include Lindstrom Equipment and Western Equipment.

Lindstrom Equipment, with two locations in Mondovi and Menomonie, Wis., has joined the Apache dealer network. The agreement will extend the sales of Apache sprayers to regions in Western Wisconsin and eastern Minnesota.

Strip-till and precision farming technology intersect on many strip-tillers’ operations to improve efficiency and productivity. While auto-steer and GPS guidance are almost considered standard on many farms, there is increasing investment in RTK-level GPS correction systems.

Results of the 4th Annual Strip-Till Operational Benchmark Study, which analyzed the 2016 cropping season of more than 450 strip-tillers from 20 states and Canada, revealed that use of RTK increased to a record high, with more than 81% of strip-tillers utilizing the high-accuracy GPS correction signal.

So which is the most popular brand of GPS system among strip-tillers? For the fourth year in a row, John Deere maintained its stronghold by nearly a 2 to 1 margin over second place. About 43% of strip-tillers utilize Deere systems, consistent with the 2015 total. 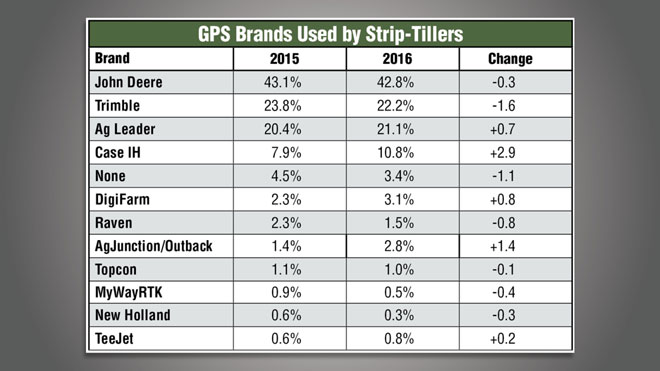 A closer look at the top 10% of study participants, based on corn and soybean yields, revealed a higher adoption rate of RTK, with 95% of this group utilizing the GPS correction signal.

A higher percentage of the top strip-tillers also favored Deere GPS systems, at 65%, a 4-point increase over 2015.

You can see more comprehensive analysis of the 4th Annual Strip-Till Benchmark study to include breakdowns of equipment usage, fertilizing practices and yield data during a free, live webinar event on Monday, July 17. Visit www.StripTillFarmer.com for more information and to register.

Deere & Co. inked a strategic alliance last week that helps fill a void in its European product lineup for dedicated material handling products in agriculture. John Deere dealers in Europe have been declared the preferred distribution channel for a range of agricultural materials handling solutions from German manufacturer Kramer.

The new agreement with Deere’s European arm involves direct-to-dealer distribution, retains Kramer branding and covers compact wheeled loaders as well as telehandlers. An investment in Kramer-Werke, which is part of the Wacker Neuson construction and agricultural materials handling group, will cement an agreement that both parties intend to become a long-term alliance.

Deere has no European products of its own to capitalize on the growing demand for dedicated ag material handling products, but its dealers will now have access to 9 models of Kramer all-wheel steer loaders, 4 telescopic wheel loaders and 9 telescopic handlers.

The scope of the agreement focuses initially on Western Europe, expanding later to Russia, Ukraine, Belarus and other countries of the Commonwealth of Independent States (CIS), and to North Africa and the Middle East.

Prior to the agreement, Kramer dissolved its telescopic handler supply agreement with Claas for the agricultural market that had been in effect since 2005.
In the U.S., Kramer loaders and handlers are supplied using the Wacker Neuson brand of its parent company, which in 2016 had revenues of $1.55 billion.

As the downturn in the ag economy drags on, farm equipment dealers may have noticed more interaction with OEM suppliers than they had in the past. Due to limited resources and cutbacks, OEMs have become more reliant on the expertise of their suppliers to assist with training their dealer networks.

Roger Murdock, vice president of sales and marketing for Ingersoll Tillage, says this is a trend Ingersoll is experiencing. He says the farm economy has changed and the aftermarket has become more important to OEMs who aren’t running their tillage and seeding and planting facilities at full capacity like the used to. Of course, the same amount of acreage is still being planted and products still need to be replaced. As a result, Ingersoll has been spending more time with the OEM dealer networks for product training.

Farm equipment Dealers are forecasting 2017 sales to be down 2%, according to Ag Equipment Intelligence’s latest Dealer Sentiments survey. This is an improvement from the year-to-date average forecast of down 3% and April’s forecast of sales dropping 4% for the year. Shortline and other dealers were the most optimistic, calling for a 2% increase in sales in 2017. AGCO dealers on the other hand were the least optimistic, forecasting sales to drop 6% this year. 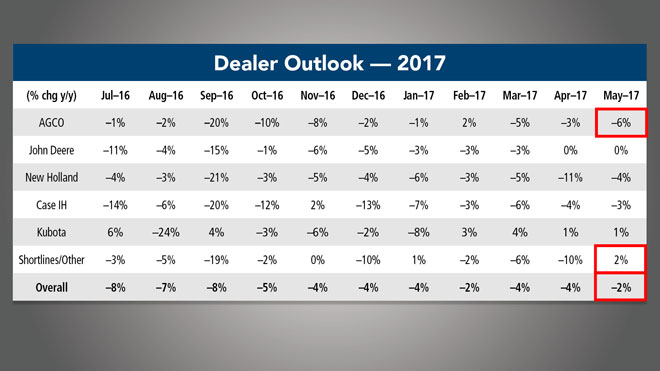 Dealer commentary suggests weather and low commodity prices remain headwinds in the near term, but dealers remain optimistic on customer activity in the second half of the year. One dealer said, “Our customers are more positive as it relates to the new administration, but that optimism has been offset by low expectations around commodity prices.”

Another commented “Challenging commodities markets and lender discouragement in agricultural equipment investment have led to customer hesitance in purchasing new or used equipment.”

On the more positive side, one dealer said, “We continue to be very optimistic about sales growth in 2017. The market is steady and the overall ag economy in our area is healthy. The used export market is strong for us and has contributed to increased new equipment sales.” 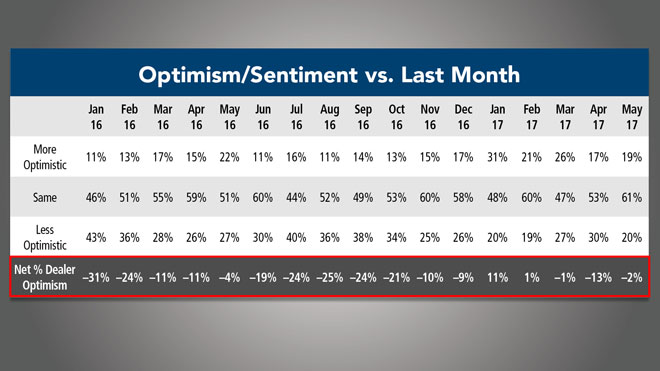 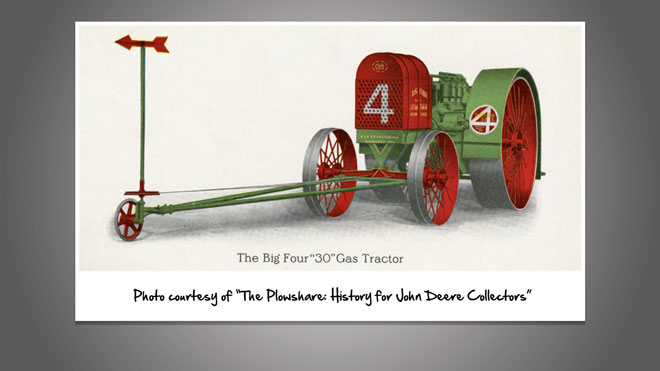 At the 1909 Winnipeg Agricultural Motor Competition, one of the earliest shows to feature tractors, Deere and Cockhsutt were the plows of choice. Deere delivered the largest, a 14-bottom gang plow. A seven-bottom version was hitched by the Gas Traction Company to its Big Four “30” tractor. The combination of the Big Four “30” and the Deere plow won the gold medal for the over-30-horsepower class. Gas Traction’s Big Four “30” was a giant among tractors of the day, weighing in at 19,000 pounds, with drive wheels reaching 8-feet in diameter.