The latest episode of On the Record is now available! In this week’s program, we cover AGCO and CNH Industrial’s 4Q and full year 2019 results. Art’s Way also reported its 4Q and year-end sales, including a 59% improvement in 4Q sales vs. the same period last year. Also in this episode: strides in rural broadband access and an improvement in producer sentiment. 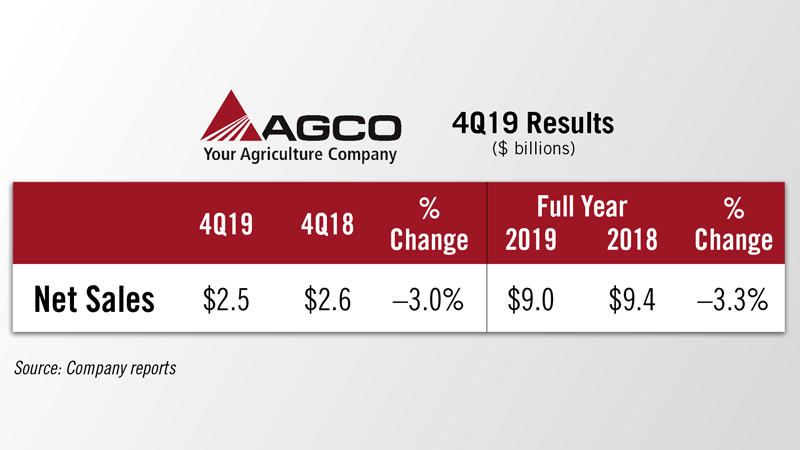 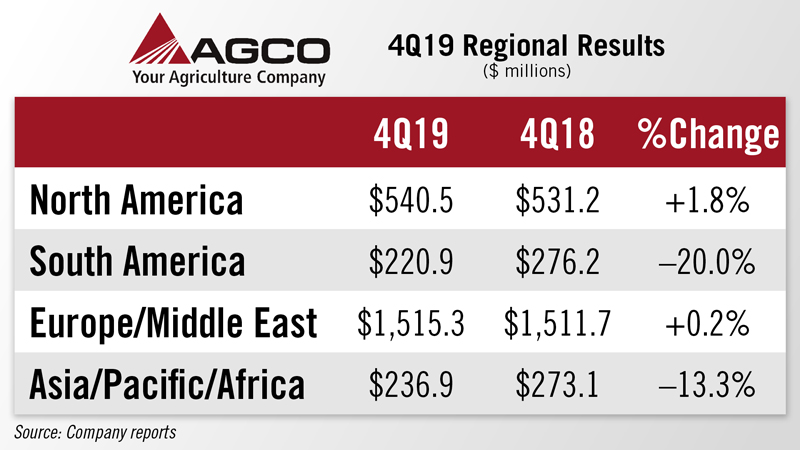 Martin Richenhagen, AGCO’s chairman, president and CEO says their results were impacted by higher than anticipated new product warranty costs. Warranty expenses increased by about $23 million in the fourth quarter. This was primarily due to field product improvement campaign costs to support new harvesting products, the company says.

Looking ahead, AGCO is forecasting relatively flat global demand in 2020. 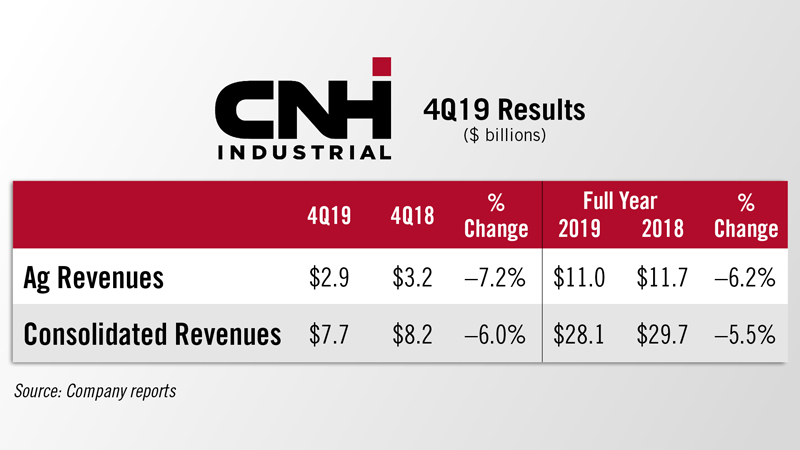 Ag revenues for the full year had a similar result, down 6.2% vs. 2018 to $11 billion. The company says the decrease was primarily driven by lower industry volumes in North America and Rest of World markets, coupled with actions to reduce dealer inventories in the second half of the year. This was partially offset by price realization performance across all geographies and sustained aftermarket activity.

Looking ahead, CNH Industrial says it expects farmers’ sentiment to gradually   stabilizing during 2020 even though soft commodity prices remain under pressure. The company says it will continue to manage production prudently until it sees signs of improved end-market demand, particularly in this first quarter. CNHI will maintains strict cost discipline and accelerate its simplification and optimization initiatives, while continuing to invest in precision and digital farming solutions.

Nebraska John Deere dealerships Green Line Equipment, Stutheit Implement and Plains Equipment Group announced plans to merge their businesses, creating AKRS Equipment Solutions. The new dealer group will have 27 locations across Nebraska and part of Kansas. The deal is expected to close by the end of March 2020.

New Holland dealership Robertson Implements has acquired 4 locations from Moody’s Equipment. The dealership now has 11 locations in Alberta and Saskatchewan. The North Battleford and Lloydminster locations of Moody’s have been purchased by Novian Bros.

Bob Mark New Holland announced plans for a fourth location in Napanee, Ont. The new store is expected to open in Spring 2020.

Digital connectivity is taken for granted in many areas, but high-speed internet is still absent in many rural areas throughout the country.

According to a 2019 USDA report, if expansion of reliable digital connectivity into rural farming areas were achieved, the benefits could result in a nearly 18% increase in total production, which could equate to more than $50 million in annual gross benefit for U.S. agriculture.

Government initiatives to expand rural broadband appear to be gaining momentum, as the FCC voted in late January to advance a $20 million plan to improve broadband connectivity in underserved rural areas.

The Rural Digital Opportunity Fund (RDOF) plan is an extension of a 2018 program which allocated nearly $1.5 billion to create broadband infrastructure for more than 700,000 rural homes and businesses across 45 states.

The improvements could have short- and longer-term benefits for farmers and precision service providers, says Todd Janzen, attorney with Janzen Ag Law in Indianapolis, especially as automation continues to expand in ag.

“If we’re talking about increased field connectivity, that would be very valuable because we’re hearing and seeing more talk about using artificial intelligence and machine learning on equipment. For that to work, you have to have a good connection to some form of cloud-based process…because your artificial intelligence doesn’t usually just exist on the device. It’s usually connected to some larger mainframe or server where it can combine data and information with other users as well to make decisions.”

Another factor in the expansion of rural broadband is the development of 5G wireless connectivity. The gradual rollout of the network, which began in 2019, by select service providers is designed to provide higher bandwidth and lower latency to a higher volume of digital devices. 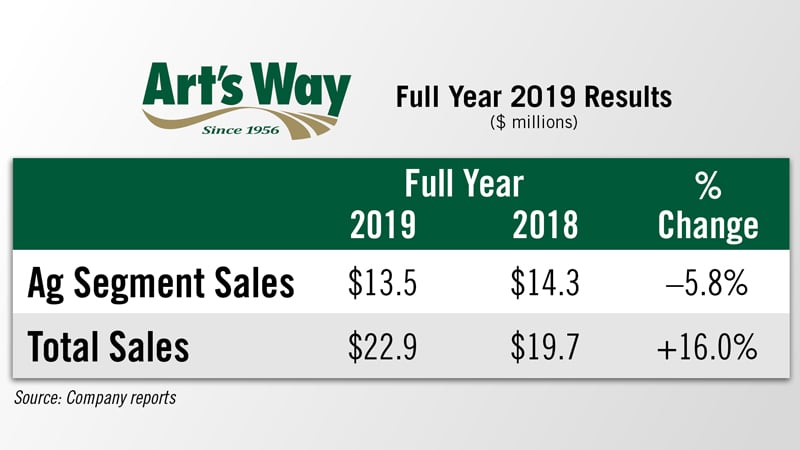 Now here’s Associate Research Editor Ben Thorpe with a report on the results of the latest Ag Economy Barometer from Purdue University.

Purdue University’s Ag Economy Barometer rose to 167 in January, a 17 point jump from the 150 reported in December. The rise in this month’s barometer was mostly attributed to an increase in optimism about future conditions in agriculture. The Index of Future Expectations rose to 179, while the Index of Current Conditions was mostly unchanged from December. The improvement in future expectations coincided with President Trump’s signing of the Phase One Trade Agreement between the U.S. and China. 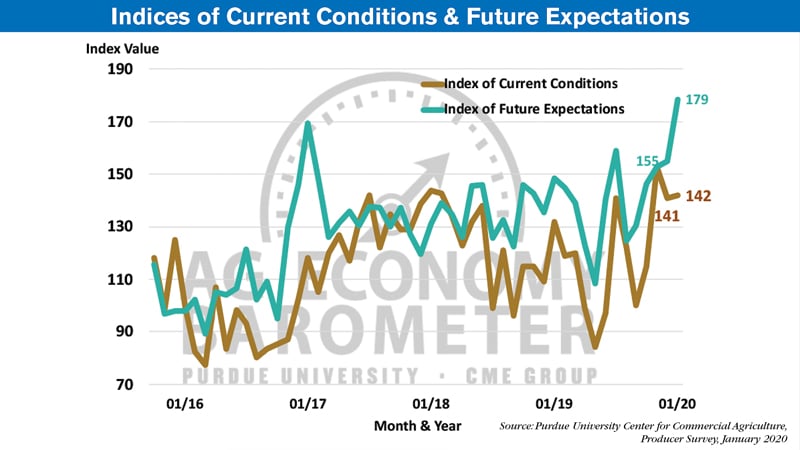 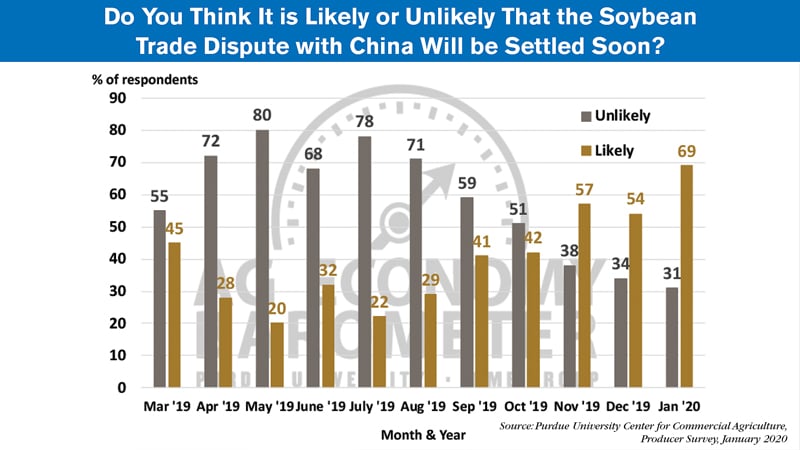 The percentage of farmers who expect the soybean trade dispute to be settled rose to 69% in January, up from 54% in December. That percentage has been rising since July when 22% of producers said they expected a quick resolution to the dispute. At the same time, a total of 80% of farmers in January said they expect a favorable outcome to the trade dispute, compared to 72% in December. 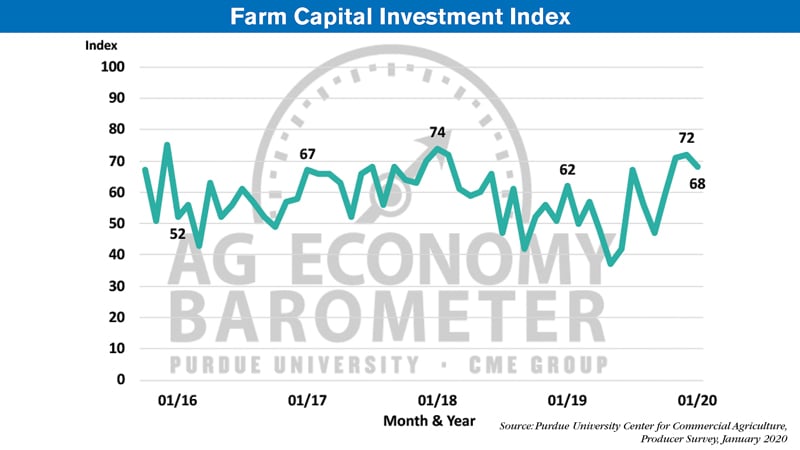 Despite the improvement in future expectations, the Farm Capital Investment Index fell 4 points in January to 68. The index is based on a question that asks farmers if now is a good time to make large investments in things like machinery and buildings. Despite the small decline in January, the index remains stronger than it was in late summer, when it ranged from the high 40s to the high 50s. 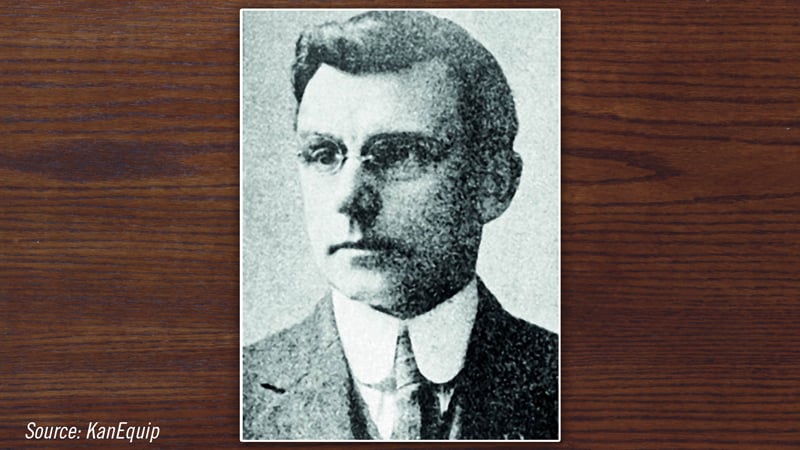 New Holland traces its roots back to 1895, when Abram Zimmerman founded a blacksmith shop in the Pennsylvania town of that name. In order to expand his business, he began retailing stationary engines to power farm machines such as animal feed mills, but his customers often found that the units froze during harsh winters. This led him to develop a freeze-proof engine of his own design. Although it underwent changes of ownership and management, the New Holland Machine Company grew to later develop a number of successful farm implements, notably the first self-tying pick-up baler.

As always we welcome your feedback. You can send comments and story suggestions to kschmidt@lessitermedia.com