January 19, 2017 | Posted in Mergers & Acquisitions
Source: The Monett Times
For the latest news on dealer growth, including acquisitions, consolidations and new locations, visit our Dealers on the Move feed.

Dealers on the Move is brought to you by the 2017 AMC Engineering Conference for off-highway equipment engineers, April 25th to the 27th in Waterloo, Iowa.

MONETT, Mo. — Fritz Implement, located north of Monett, Mo., on Highway H, announces the sale of the farm equipment dealership after 37 years of local service, according to a story in The Monett Times.

Crown Power and Equipment Co., based in Columbia, takes over ownership in mid-January. Fritz Implement will become the seventh store in the Crown group in Missouri.

Robert and Rachel Mais, the son-in-law and daughter of founder Oren Fritz, announced the change to their employees, noting that keeping the main product lines and staff was the main focus in the transition. 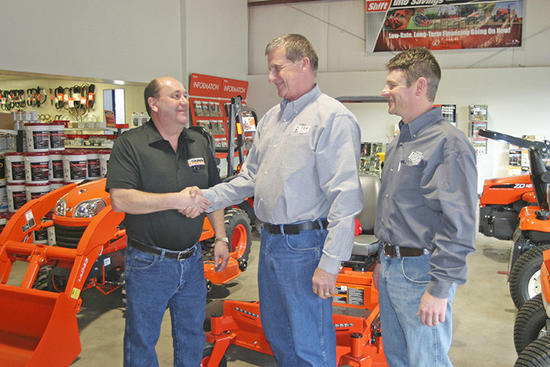 "The product lines of Case IH, Kubota, Land Pride and Vermeer make a unique offering for our customers," says Robert Mais. "We worked hard to get the approval of the suppliers to continue those brands after the transition."

Oren Fritz, who started the company with his late wife, Carolyn, said in a statement that he was proud of the years of service the store offered to the community and of the continued growth of its customer base. He praised the hard work and commitment of Robert and Rachel Mais, as well as their staff, for growing the company to $10 million in annual sales.

Mike Elbert, who has 19 years experience at Fritz Implement, will become the new store manager, stepping up from the sales manager post. The Maises will assist in the transition in the coming months.

"We're really excited to come to Monett," says Crown representative Harold Chapman Jr., son of the company's general manager. "We have a couple brands we can grow in Monett, with Kubota's construction line, for example. The management here has done a lot of things right. We're pleased that Monett is becoming part of six other brother and sister stores."

Crown will provide area customers with Case IH and Kubota tractors and equipment, Land Pride attachments and hay equipment from Vermeer, which has been sold by Fritz Implement since 1995. Equipment maintenance and service will continue.

Fritz Implement has 12 employees, in addition to the Maises, who interviewed to keep their positions. The company has received awards over the years from the distributors it serves. More than 200 people attended the company's 30th anniversary celebration in 2009. Customers come to Fritz from a 100-mile radius.