The issues confronting farm equipment dealers haven't changed much in the last three years, but how their major suppliers view their concerns may be.

Three years ago, when Farm Equipment sat down with top executives of the major ag equipment makers to get their take on the "state of the industry," particularly as it related to their distribution channels, there wasn't a lot of talk about "dealers as customers." (See "How the 'Big Four' are Dealing with Dealer Issues, Farm Equipment, January 2006, p. 35-52) 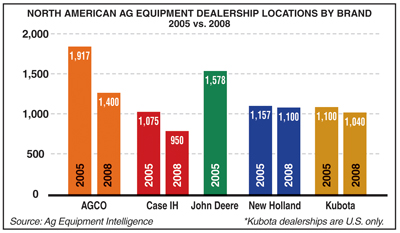 When we sat down with them recently to revisit their views on dealer concerns, the phrases "dealer support" and "re-connecting with customers" underlined their comments.

Most of the discussions in 2006 focused on reducing the number of retailers selling the majors' equipment as well as efforts to reduce the number of shortline brands that the majors' dealers carried on their lots.

The most obvious change is in the leadership of the organizations themselves as AGCO, Case IH and New Holland all have different faces heading up their North American operations today. In fact, two executives profiled in the 2006 article, Jim Walker (then with AGCO) and Bob Crain (then with New Holland), represent different manufacturers today (Case IH and AGCO, respectively).

New to our panel this year is Greg Embury, U.S. vice president of sales & marketing for the Kubota Tractor Co. Since 1969 when the company first moved into the North American market with its low-horsepower, compact tractors, Kubota set the table for dozens of other manufacturers to participate in the explosion of the rural lifestyle market. With 9 years of experience serving this evolving customer base, Embury brings another perspective to discussions about the U.S. farm equipment market.

Missing from this year's discussion is John Deere. While four of the five largest suppliers of ag equipment accepted the opportunity to openly connect with Farm Equipment's dealer universe with their views about agribusiness and the future, John Deere declined to participate.

What Else Has Changed?

Another significant change since Farm Equipment published its first interviews with the major-line executives is the decidedly different tone they're taking toward their dealers. Three years ago the majors were clearly intent on "consolidating" their distribution channels by reducing the total number of dealers selling their equipment and "encouraging" their strongest dealerships to expand their operations.

As you'll see in the bar chart at left, that's been accomplished to some extent. Still, the recent boom years for ag equipment sales have allowed some dealerships "on the edge" to remain in business, and that overall dealer networks are still too fat. Dealer "attrition" appears to be the majors' strategy for further reductions in distribution channels. If and when equipment sales begin to slow, dealer numbers are expected to decline further.

It's just as clear 3 years later that the majors do not like shortline equipment sharing space and resources on their dealers' lots. One executive even refers to shortline brands as "parasites." Dealers admit that the pressure is still on to reduce or eliminate other lines they carry and the executives Farm Equipment interviewed said nothing to dispel that notion.

Based on the number of new products the majors have introduced to "fill in the gaps," the pressure for single-color dealerships will not abate any time soon. Current economic conditions will likely present a new scenario for ag equipment in 2009. The credit crunch has yet to have a significant impact on ag equipment sales, but falling commodity prices have created an air of "uncertainty" to the market. Despite this, as the farmer's cost of fuel, fertilizer and other supplies continues to stabilize, the executives look for another solid year in 2009.

How Dealers Deal with Ag's Business Cycles: Are We Looking at a Downturn in Ag Equipment Sales in the Near Term?