It’s been a year full of special occasions for Bill Rusler and his wife, Eleanor. 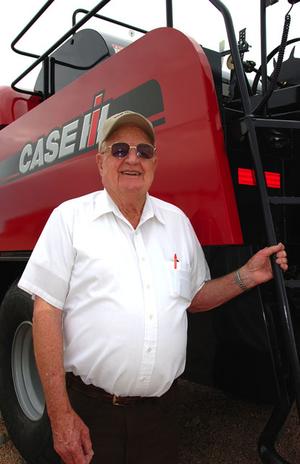 In April, they celebrated their 60th wedding anniversary. During the past year, she celebrated her 80th birthday and his is coming up in October. Their church, Vineland United Methodist, where Bill Rusler has the special honor of being the longest serving member, just celebrated its 120 year anniversary.

Even with all of these milestones, nothing could be more meaningful than the 50th anniversary of their business, Rusler Implement, which has become a fixture of agribusiness in the Arkansas Valley.

Bill Rusler and Eleanor Mauro were born within two miles of each other and both went to school at Lakeside-Vineland. His family farmed in the Arkansas Valley starting in 1882. Her dad dug the first well in the area, initially a dry hole, and her grandfather helped to hand-dig the Bessemer Ditch. Three years after that, when water started seeping into the earlier hole, they installed the first electric pump.

“The farmers came and lined up to see the water coming out of the ground,” Bill Rusler recalled.

More recently, water is again at the center of changes in the valley. Rusler says one of his biggest disappointments is seeing farms dry up, as crucial water rights are sold off to municipalities and private interests.

“I never would have dreamed of the changes I’ve seen in 50 years, not all of them good,” he said sitting behind the desk at his busy office. “There’s good and bad, highs and lows.”

Rusler fondly credits his wife with their shared success. “She raised five kids, and she did a tremendous job doing that while I worked my butt off. And she did too!” he said. “She’s been a great partner.”

A dealership is born

Bill Rusler started out as a third generation farmer and loved it. But as a father with three young children, when his crops were hailed out for the third consecutive year, he decided he’d better get a job in town.

He landed a position selling International Harvester equipment for Abell Truck and Equipment in Pueblo, a perfect fit.

“I always had a red stripe down my back,” he joked.

Four years later he and a partner bought the IH dealership in town. A few years after that, his partner sold him his half of the business, creating the Rusler Implement business that still exists  today.

Son Bob started working at the store while still in junior high. As he recalls, his dad approached him while he was out hoeing grandad’s watermelon field, an opportune time to make the offer. Bob continued to work at the dealership during the summers and trained in each of the departments while earning a degree in ag business.

In 1982, the Ruslers had the opportunity to buy the IH dealership from the Allan Templeton family in Rocky Ford. “People thought we were crazy, since interest was 19 percent and inflation was 14 percent at the time,” Bob recalled. “But the family really wanted to sell, and they wanted to be sure that their customers didn’t go one day without being able to get parts. I’ve always respected them for that.”

Bob Rusler has managed the Rocky Ford store ever since, and a member of the Templeton family, Don, still works there today. In 1999, they tripled the size of the shop and added more acreage but space is still running short. “The equipment keeps getting bigger. You can only park two machines where you used to be able to park eight,” Bob said.

Implement manufacturers and dealerships have been consolidating rapidly, but the Ruslers have been judicious about expanding, even when they had other opportunities.

“We feel personal contact with our customers is important,” Bill Rusler explained. “If someone has a gripe or a problem, they always have somebody to talk to.”

He recalls being “very surprised” when IH announced it was merging with Case. Later, New Holland merged with Ford. While bigger isn’t always better, Rusler said the companies benefit by combining their expertise to produce first-rate tractors, combines and equipment lines.

Bob recalled that when Case IH was formed, the company introduced a brand-new tractor unlike anything on the market, with features that included a flip-open hood and an innovative design that moved the exhaust from the front over to the side of the cab frame. “It was an industry changing tractor,” Bob said.

In line with the size of farms, farm machinery keeps getting bigger, more sophisticated and more expensive to buy, Bob said. One of the first combines he sold when the Rocky Ford store opened allowed a farmer to combine all day and harvest 10,000 bushels of corn. Today’s version can harvest 6,000 bushels an hour. “In two hours, you can outdo what he did in a full day,” Bob noted.

Comfort for the operator has also been upgraded. “If a farmer sits in that cab all day, it better be comfortable,” Bob said.

“Prices are high, but interest rates are low,” Bill noted. “The companies have a lot of financing programs to help our customers.”

At the same time, there’s also a new emphasis on products designed for the growing number of weekend farmers and retirees who require smaller equipment. Two years ago, son Brian left an executive position in corporate America to join the family business working in the Pueblo store and targeting the rural lifestyle market. His wife, Rhonda, also went to work in the office.

“It’s been good for us,” Bill said. “We’re really happy to have them here.”

Despite the national economic recession, business for the company remains robust.

The Ruslers have always done their banking, over multiple generations, with Pueblo Bank and Trust.

“We’ve been there longer now than any of the bank’s employees,” Bill said with a grin.

Brand loyalty is something that has always been extremely important to him, and he practices what he preaches.

Rusler’s own employees have long tenures of service, most of them at least 20 years and often more. Many have dedicated their entire careers, including long-time former sales manager Louie Guagliardo, former accountant Mel White and former service manager Sam Genova.

“The boss is too easy on them, I guess,” Bill Rusler joked.

Maybe it’s no coincidence that two people who have worked so closely together for so many years think alike. “I’ve been blessed to work with my dad like I have,” Bob said. While he is starting to look ahead to his own retirement and watching his son Brett, who recently graduated from college, join the business representing the third generation, his dad still goes into work every day and, not surprisingly, attributes the company’s success to hard work.

“There’s no downtime, not for us,” Bill said with vigor.

A fixture in the valley

There are still Ruslers farming in the Arkansas Valley. Another of Bill’s sons, Tom, farms near Avondale with sons of his own. Over his lifetime, Bill Rusler has watched drought, crops and processing facilities come and go.

He remembers as a kid pitching sugar beets into the back of a wagon with a big fork and later topping them all by hand.

“You never had a complete crop failure with beets. There was always some money there for the banker,” he recalled. In addition, he noted, “It used to be that every farmer out here had a small feedlot with cattle in it.” At one time, the Ruslers built pinto bean windrowers, before that business dried up. Popcorn production was popular for a while. When the Conservation Reserve Program came along, thousands of acres of land were idled, something the Ruslers felt in their bottomline.

Even so, Rusler Implement continued to adapt, and the business has proved its staying power.

The agricultural industry around him continues to face new and different challenges, but Bill doesn’t believe it will ever be seriously threatened. “People have got to eat,” he said. “There will always be farming in the valley.”

Bob Rusler is equally upbeat about the future. “There will be farms for a long time to come, and farmers need farm equipment and someone to service it.”