In this episode of On the Record we preview the results of the 2022 Big Dealer Report, which tracks consolidation trends among farm equipment dealers. In Technology Corner Michaela Paukner takes a closer look at the significant role autonomy will play in Deere's target recurring revenue goal. Also in this episode, what CNH Industrial's "reverse integration" of Raven means for dealers and customers and a look at the 10-year equipment purchasing trends of no-tillers.

The results of Ag Equipment Intelligence’s annual Big Dealer Report are in, and the percentage of total ag stores owned by big dealers is up to 37% vs. 35% a year ago. For the sake of the report, a big dealer is any dealer that operates 5 or more ag stores. 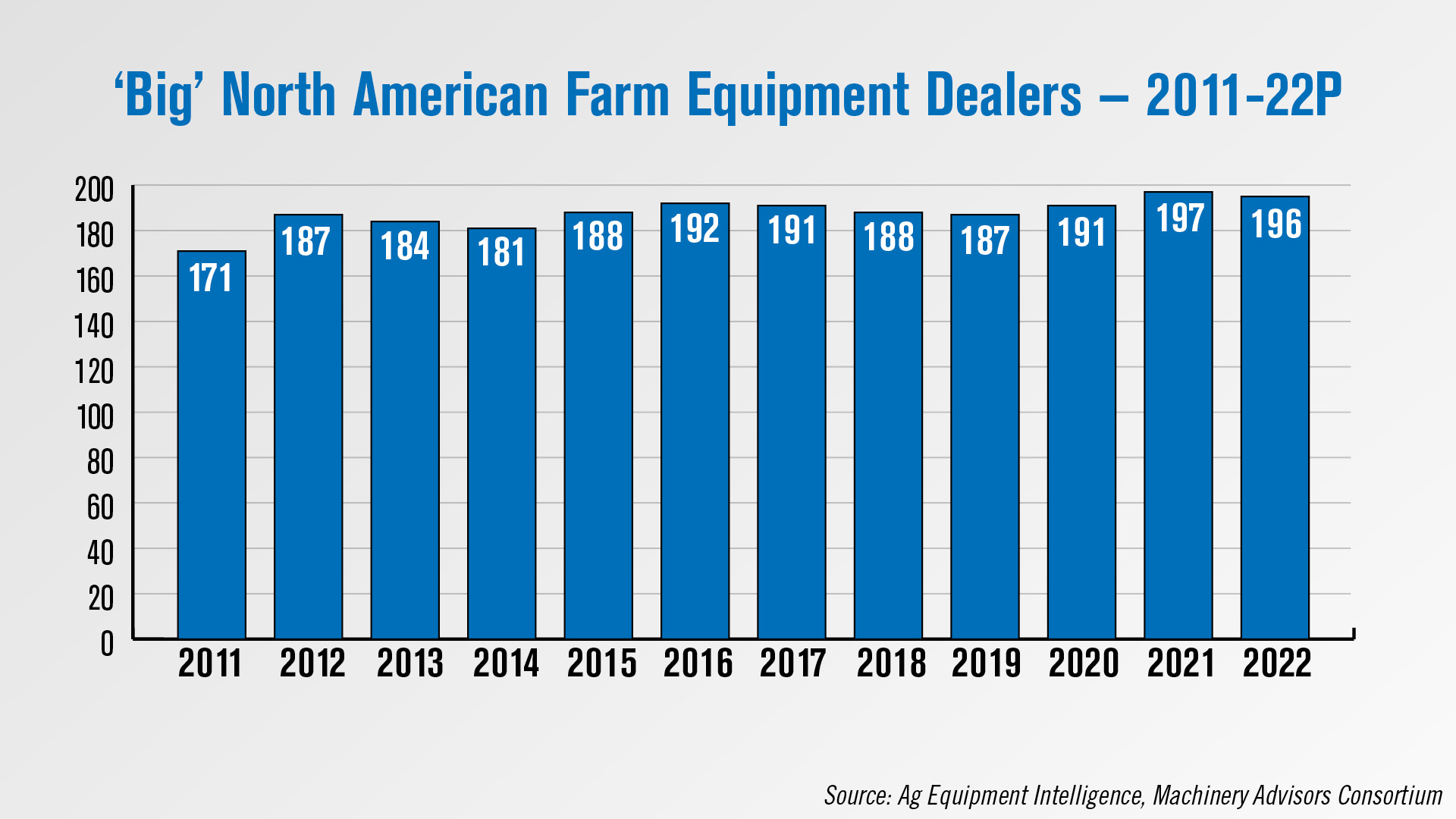 The number of big dealers dropped slightly to 196 from 197 in 2021, indicating that dealer consolidation is continuing its rapid pace.

Some of the notable changes in this year’s report is the number of Kubota big dealers, which was up 11% over 2021 at 21 Big Dealers. There has been a notable push by Kubota for Kubota only branded stores and for dealership groups with scale. For instance, Florida Coast Equipment — who didn’t make the list last year — has made 3 acquisitions since October 2021 bringing it to 11 stores.

Also notable was the significant decrease in the number of Deere big dealers. In 2021, Deere had 95 big dealers. This year, that number has dropped to 89. Hutson Inc. made the biggest leap, coming in at number 66 on the list last year up to number 14 in the latest report.

The full Big Dealer Report, with the complete list and analysis of the dealer consolidation trends, will be available later this month.

This week’s Dealer on the Move is Service Agricole. The 5-store AGCO dealership announced its Sainte-Marie, Quebec store has reopened in a new location. The new 40,000 square foot store includes an improved a 26,000 square foot service shop.

We’re taking a closer look at how autonomy and digitization play into John Deere’s overall strategy and revenue growth — based on comments from the company’s recent reports and investor calls.

Key to execution of that strategy is the technology stack, Deere says, and the company has made some significant moves in this space in the last year.

In Deere’s 2021 Annual Report, Chairman and CEO John May says the company devoted $2.5 billion to research and development, and capital expenditures in 2021. Investments included the purchase of Bear Flag Robotics, a startup that retrofits autonomous driving technology onto existing machines, and the acquisition of Harvest Profit, which has software to measure profit at the field level. Deere also announced a joint partnership with semi-autonomous sprayer company GUSS Automation on April 21, 2022, the day following the recording of this Technology Corner segment.

Going forward, Deere aims to have 500 million engaged acres by 2026, with 50% highly engaged, meaning multiple production steps are documented and digital tools are used to complete multiple activities over a 12-month period.

As Ag Equipment Intelligence previously reported, Deere is looking to achieve a 10% recurring revenue mix by 2030. Analyst Shane Thomas of Upstream Ag Insights says that 10% would be close to $5-6 billion when accounting for business growth over the next 8 years.

During Deere’s 2022 first quarter investor call, chief financial officer Ryan Campbell said autonomy will play a significant role in achieving that goal, as will further developing a sense and act platform. Deere previously said See & Spray was the first step in such a platform.

Deere plans to sell its autonomous 8R tractor as a subscription service, though the details are still in the works. See & Spray Ultimate, Deere’s green-on-green smart sprayer, also lends itself to a novel pricing model that enables recurring revenue, Thomas says.

He writes, “Deere will be continuing to maintain and improve the software capabilities that make the See & Spray technology more valuable to the farmer … That continued investment from Deere will deliver new and better outcomes to farmers, which warrants a continued annual fee, assuming it is priced fairly.”

CNHI CEO on Raven Integration, Getting Away from Bureaucracy

Wine says that while the company has been pleased with the acquisition, it “didn’t realize how strong the team and culture” are at Raven. A reverse integration is defined as a merger in which the purchasing company adapts in some way to the purchased company.

“We’ve known them for a long time. They were a supplier. They make great technology that our dealers and customers love. What we didn’t realize is how strong that team and culture is. And that’s what’s driving what we call our ‘reverse integration.’ That’s not easy, when you’re this big global conglomerate, to let this little company have their culture and their influence come back on. That’s what we’re striving to do. They can make us significantly better.”

At a media Q&A later in the day, when asked to expand on the reverse integration, Wine stated the purpose was to “protect” Raven Industries from the company’s bureaucracy, explaining the major line didn’t want to “upset the apple cart.”

“I admitted a little bit that we were somewhat bureaucratic, and we’re trying to get out of that, but we are still a very, very big company, and through no bad intention, people want — the IT people want to go down, the HR people want to go down, and all of a sudden, you’ve got 40 people at Raven asking questions. And they’re trying to get work done. So, the idea is just protecting them from that. We did put a CNH leader, a very seasoned leader, in to be the general manager, and he’s kind of the gate guard, if you will.”

In highlighting the value the company receives from the Raven integration, Wine also mentioned the company planned to take Raven’s precision customer support model and provide it to Case IH and New Holland customers in all its regions.

According to the results of the most recent No-Till Farmer No-Till Operational Benchmark Study, the percentage of no-till farmers who own and use air seeders has risen notably since 2014. 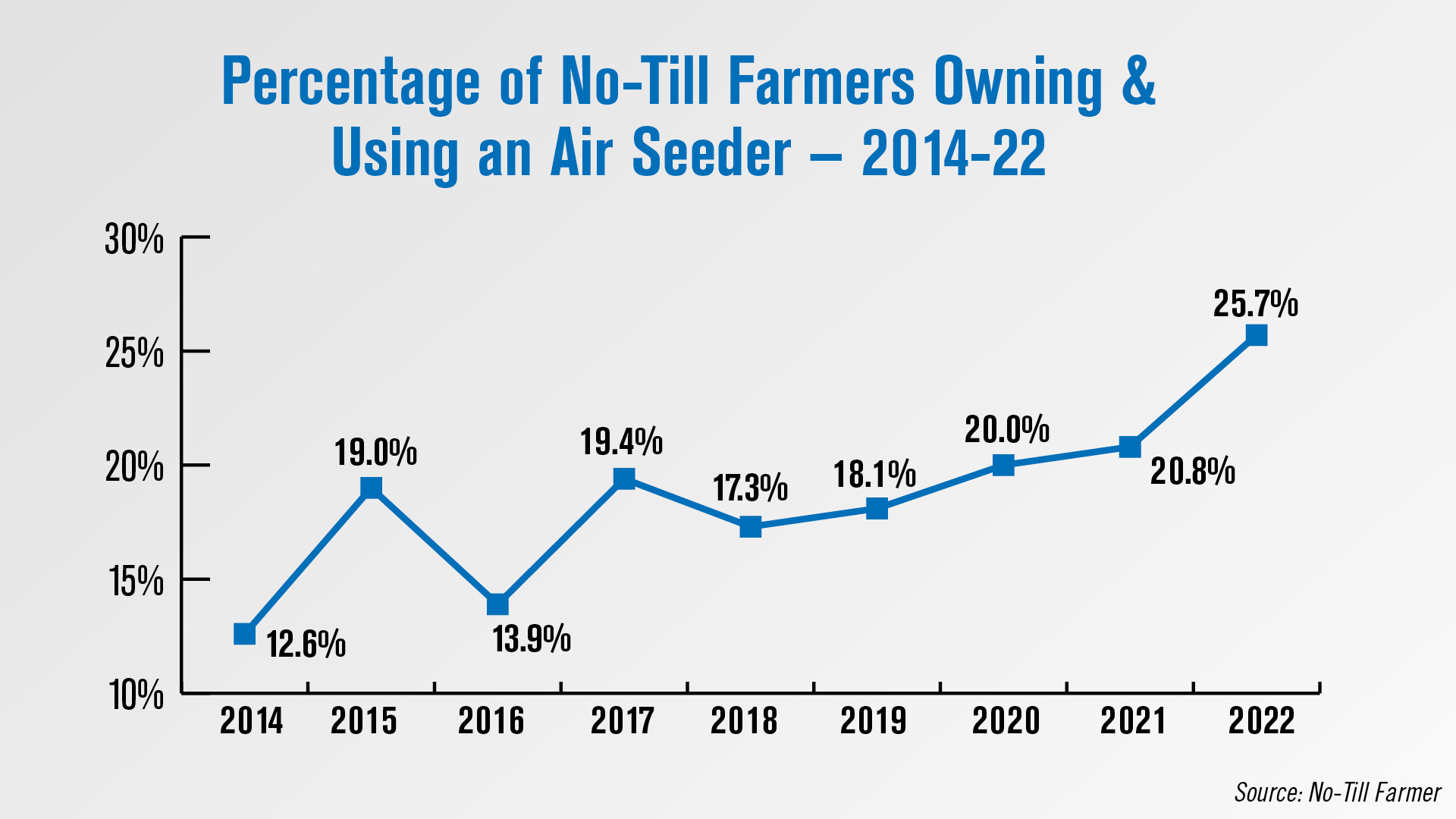 No-Till Farmer Executive Editor Julia Gerlach said regarding the data that, “The growing use of air seeders tracks with the growing popularity of both cover crops and small grains among no-till farmers.”Since the question was first asked in the 2014 survey, the percentage of no-tillers reporting they own and use an air seeder on their farm has risen from 12.6% to 25.7% in the most recent survey. The percentage has risen for 4 years straight from 17.3% in 2018.