In this episode of On the Record, we discuss the updated 2024 Strategic Plan and 4 Pillars of Precision Technology that CNH Industrial introduced during its Capital Markets Day on Feb. 22. In the Technology Corner, Michaela Paukner discusses Kovaco's remote-controlled electric skid setters which were introduced last week at the National Farm Machinery Show. Also in this episode, Deere announces its 2030 Leap Ambitions strategy, fertilizer prices continue to rise and Kubota's North American revenues seed steady growth over the last decade.

Core to the strategy is CNH’s focus on technology leadership in automation and its commitment to delivering a fully autonomous farming cycle, while increasingly extending this expertise to enhance the capabilities of the Construction segment. 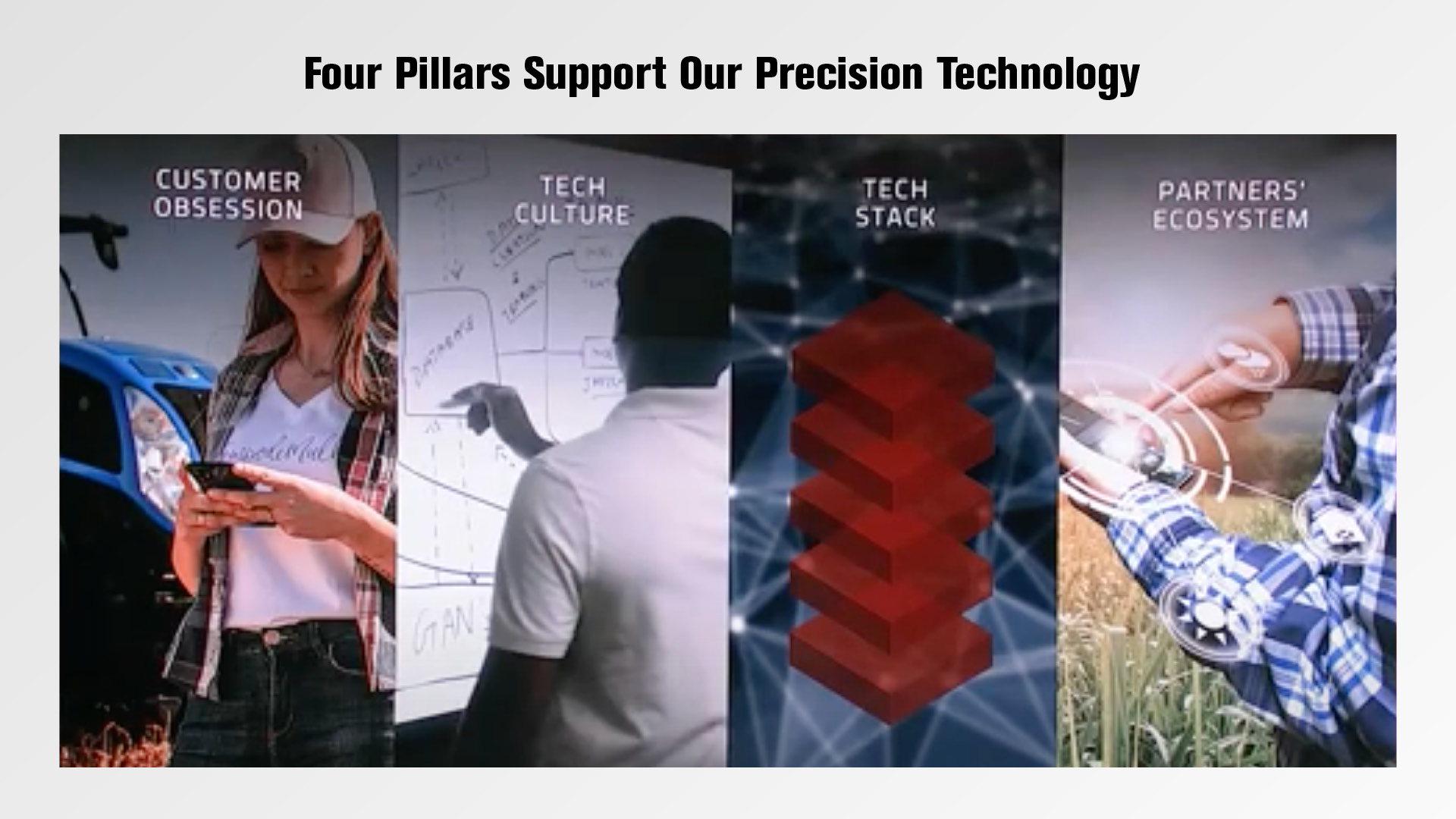 During the event CNH unveiled financial targets and capital allocation priorities for 2022-2024. Key targets by 2024 include total revenue of $20-22 billion. And margin expansion is expected despite a near doubling of R&D and capital expenditure investments from about $2.2 billion between 2019 and 2021 to about $4 billion between 2022 and 204.

This week’s Dealers on the Move include Empire Tractor and Champlain Valley Equipment.

Now a 7-store New Holland and Kubota dealer, Empire Tractor has signed an agreement to acquire Walldroff Farm Equipment in Watertown and Canton, N.Y. The deal is expected to close in about 30 days.

The Elise 900 has a 96-volt, 400-amp hour battery, 2 electric drive motors and an electric motor to run the hydraulic functions, which control the booms and the bucket. It has the same functionality as a diesel skid steer and standard skid loader hookups that fit any other attachments on the market.

“We truly believe this is revolutionary to the industry,” Martin says. “It’s given us lower operating costs, less moving parts and bringing the opportunity to go into confined spaces without emissions.”

The MiniZ is a cabless, electric and remote-controlled skid steer that features a track mini loader for entering confined spaces with no exhaust or emissions. It can fit through a doorway 30 inches wide, and with a weight of 850 pounds, it can ride on most elevators for construction applications. The MiniZ also has the ability to hook up to various attachments, and the operator can ride on the back of the machine as they would on a traditional diesel compact mini loader. It can operate for 8 hours on a single charge.

Martin sees potential in the ag industry to use the machine in horse and livestock barns to clean without much noise or emissions. He says some of his agricultural clients are hesitant about the new technology, but many are glad to see it. Martin is a dairy farmer himself, and he worries about fires and engine failures with traditional diesel skid loaders operating in dusty barn conditions.

“I believe this is the answer to that problem, given a lot less moving parts, no heat from an engine and just less maintenance,” Martin says.

“We're looking at over $10 an hour in operating costs on consumables and diesel fuel oil changes,” Martin says, “where these are going to be looking down around $2 an hour, depending on what your power costs are, but significant savings.”

Our editors are currently putting the finishing touches on Ag Equipment Intelligences Electric Farm Machinery: Outlook Through 2027 research report. This in-depth report will be released on March 15. Visit AgEquipmentIntelligence.com/ElectricReport

Along with announcing its first quarter earnings on Feb. 18, Deere & Co. announced new goals it calls the Leap Ambitions. The goals are linked to the Smart industrial strategy and operating model Deere first introduced in 2020.

The ambitions are designed to boost economic value and sustainability for Deere’s customers, as well as for employees, investors, and other stakeholders, the manufacturer says. Deere is committed to achieving these goals over the remainder of the decade. 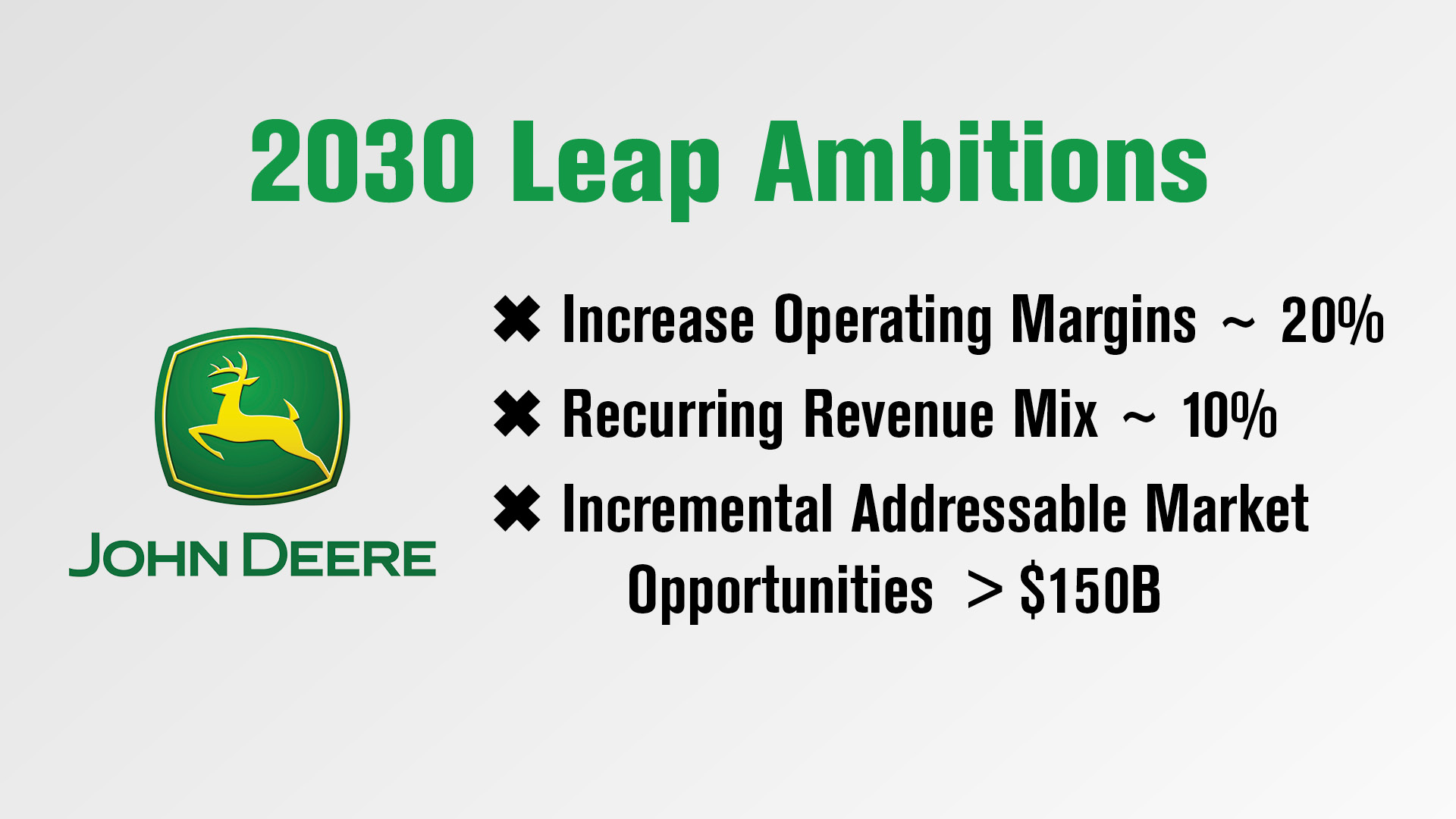 Part of the 2030 Leap Ambition targets include achieving 2030 equipment operating margin of about 20% over the course of the cycle, says Stifel analyst Stanley Elliott. Deere is also looking to achieve a 10% recurring revenue mix by 2030 and expanding the addressable market by more than $150 billion, he says.

Elliott says, “This  improved  financial  performance  is  expected  to  be  driven  by  execution  on  a number  of  strategic  initiatives  including  incorporating  digitization,  automation,  autonomy  and  electrification  into  products.  Most  notably,  this includes  See  &  Spray  and  autonomy  technologies  that  have  been  unveiled  which  should  drive  an  increased  total addressable market,  higher  recurring  revenue through a subscription model and improve margin performance.”

According to a Feb. 9 report from USDA, nitrogen fertilizer prices spiked at the end of 2021 due to a shortage of natural gas. According to the report, by December of last year, average monthly spot prices of natural gas at the Henry Hub distribution hub in Louisiana were up 45% year-over-year. 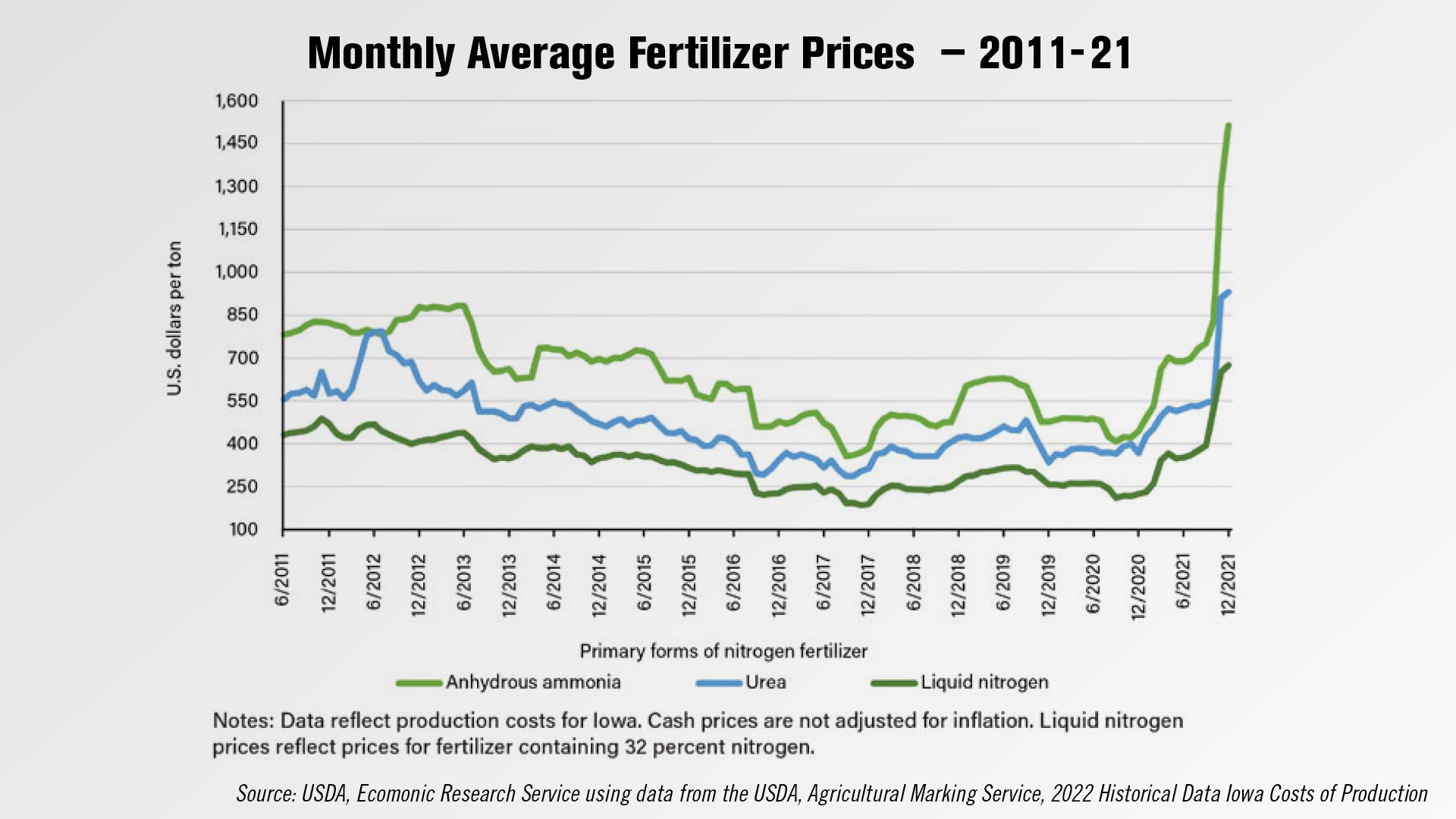 USDA Economic Research Service estimates an annual price increase of 235% for anhydrous ammonia, 149% for urea and 192% for liquid nitrogen using data as of December 2021. The report stated, “researchers expect the spike in fertilizer prices to affect producer decisions going into the 2022-23 marketing year.” 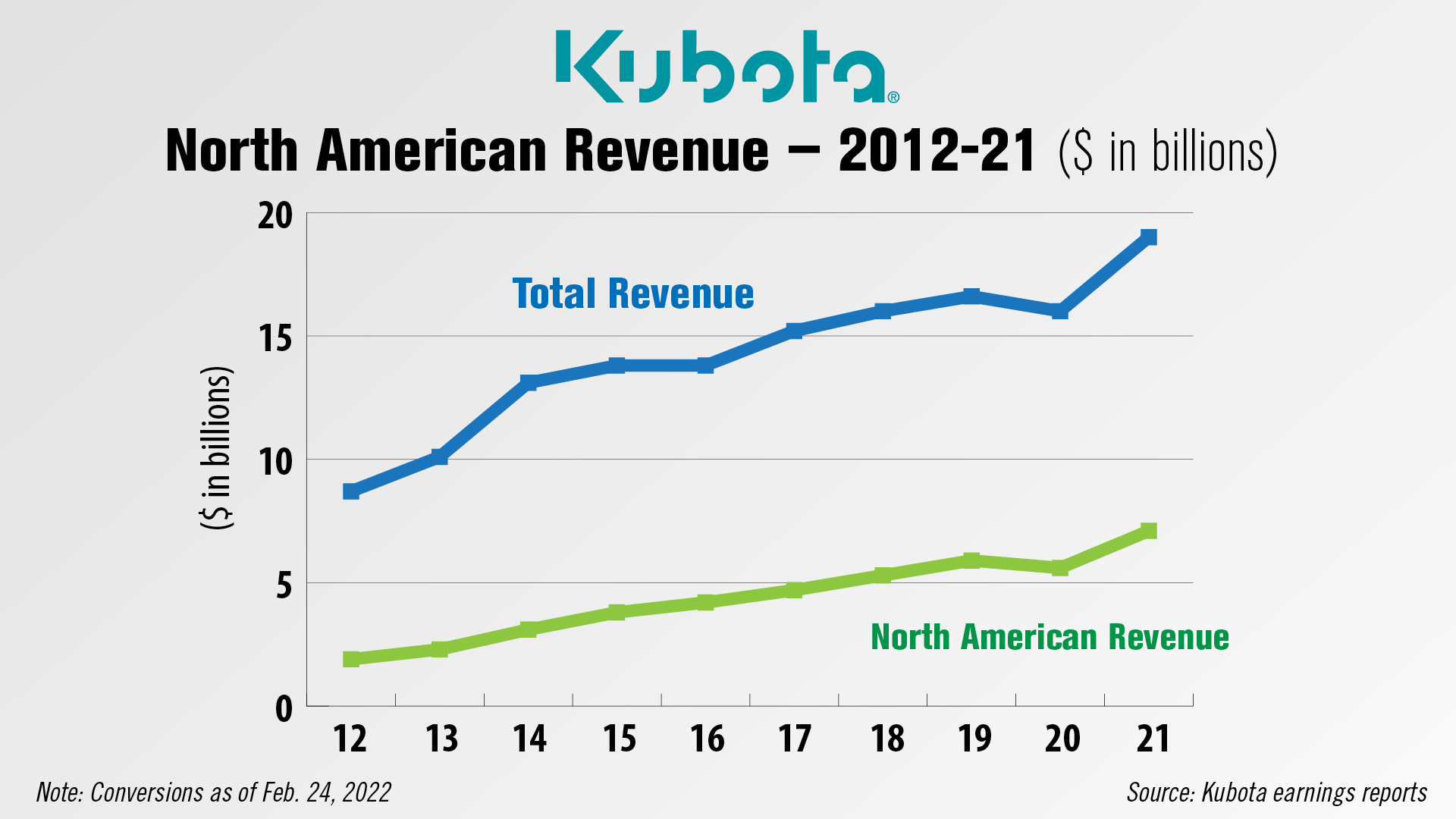 Kubota’s North American revenue has risen every year for the last 10 years, aside from a 5% year-over-year decline in 2020 to $5.6 billion. Total revenue has also maintained a steady increase in the same period, aside from a roughly 3.6% decline to $16 billion in 2020.

Note, this breakdown includes revenue from Kubota’s “Water & Environment” segment, which in 2021 made up 14% of its annual revenue. Kubota does not report data on its “Farm Equipment & Industrial Machinery” segment, which encompasses its farm equipment, engine and construction equipment business, broken down by region. This segment made up 85% of Kubota’s 2021 annual revenue. 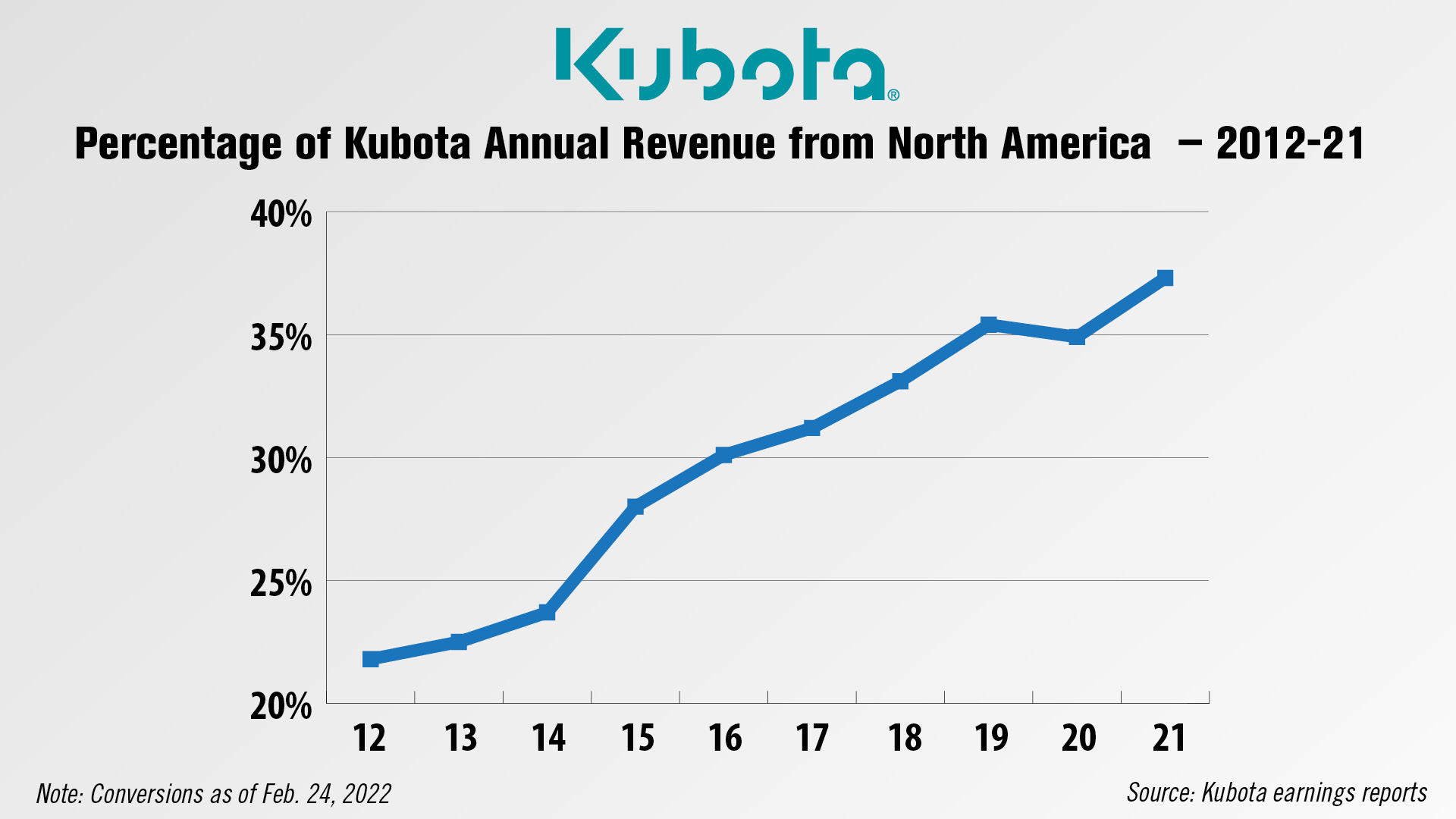 The percentage of Kubota’s annual revenue coming from the North American region has also risen every year for the last 10 years, aside from a slight decline to 34.9% in 2020. The percentage reached a record high of 37.3% in 2021.

In its 2021 earnings report, Kubota stated overseas revenue in its farm & industrial machinery segment rose 27.8% year-over-year to $13.5 billion and that in North America, “sales of tractors and construction machinery increased significantly due to strong demand.” The company forecasts a 12% in annual revenue in 2022 to $21.2. billion,