Prospects for farm income and agricultural credit conditions rebounded sharply in the fourth quarter of 2020. The average price of corn, soybeans and wheat increased more than 20% from the previous quarter, and reached six year highs in December. Livestock prices, while still less than a year ago, also improved from lows reached earlier in the year. Government payments provided broad support through the year and, together with recent price increases, the near-term outlook for the farm sector improved dramatically.

After nearly eight years of deterioration, farm income across the Tenth District rebounded in the fourth quarter alongside sharp increases in crop prices. A majority of respondents reported that incomes of farm borrowers were higher than a year ago for the first time since 2012 (Chart 1). This was a clear contrast to recent years in which a majority of bankers consistently reported steady declines in farm income. 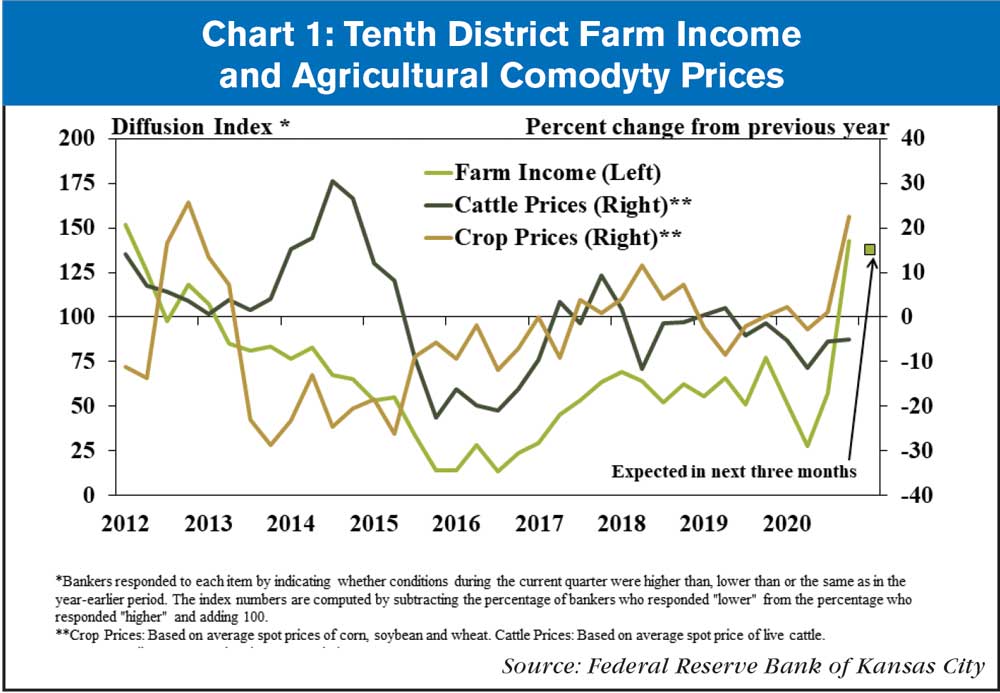 Areas of the region more dependent on livestock revenues and exposed to severe drought were somewhat less optimistic about farm income in the fourth quarter. For example, the share of bankers that reported higher income than a year ago was far smaller in Oklahoma and the Mountain States, where drought conditions intensified and less revenue is attributed to crop production (Chart 2). In fact, about 30% of respondents in those states indicated that incomes were lower than a year ago, compared with only 8% in all other states. 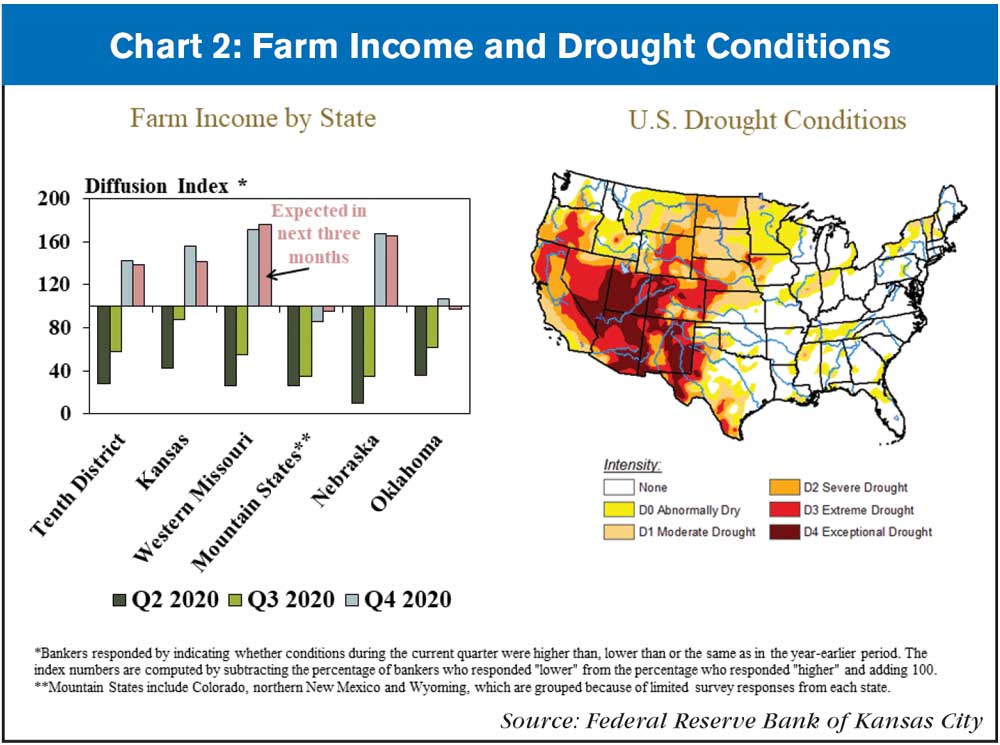 With a recent boost in profit opportunities and strong support from government aid, the financial outcome for borrowers in 2020 was notably better than what was expected earlier in the year. About 80% of bankers expected farm incomes for the entire year would be higher than initially projected in early 2020 when factoring in government payments; and nearly 20% expected the increase to be significant (Chart 3). Compared with other states in the District, the turnaround in farm income was less pronounced in Oklahoma and the Mountain States. 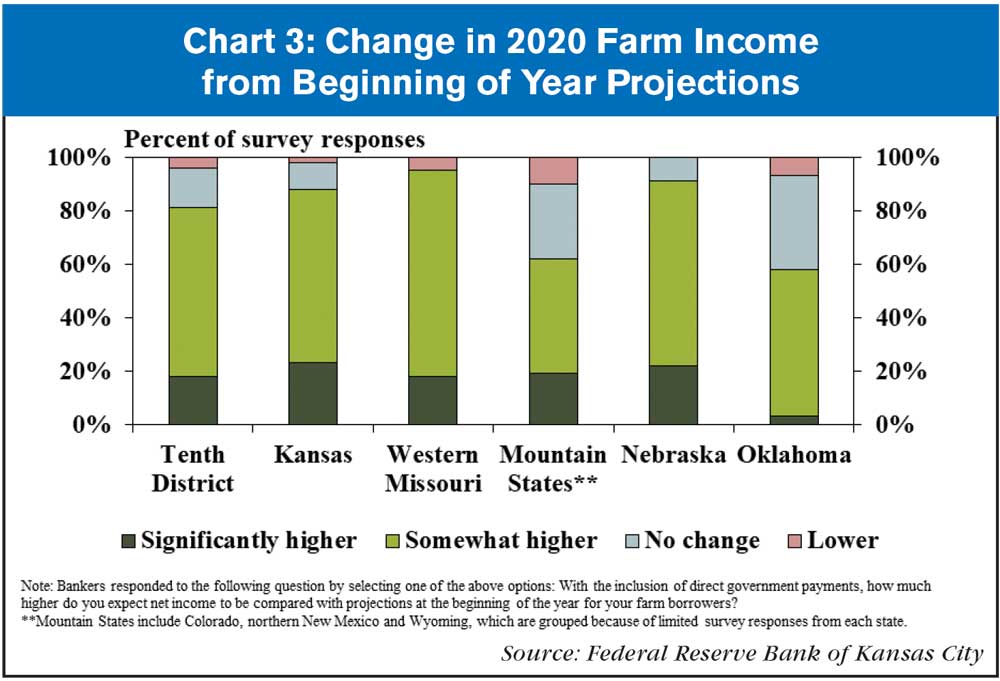 Agricultural lenders expected farmers to strengthen their balance sheets and make capital purchases with incomes larger than initially expected. About 60% of respondents listed paying down farm debts or machinery purchases as likely uses of extra income (Chart 4). Slightly less than half indicated improving working capital also would be a priority and a smaller share anticipated other types of spending. 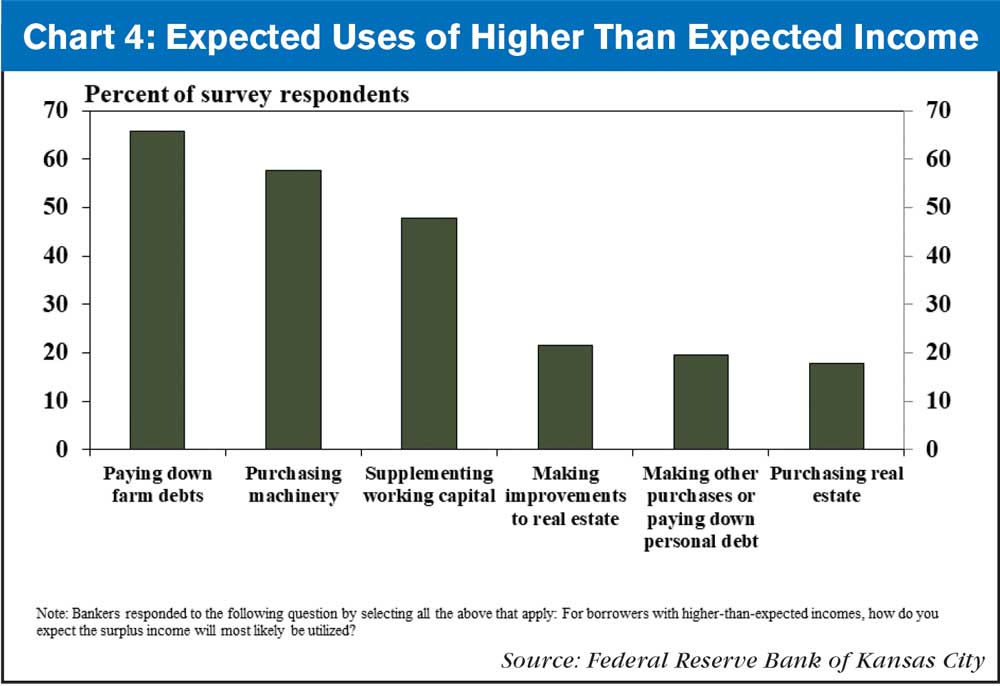 Along with better prospects for farm income, credit conditions in the region also improved following several years of steady deterioration. About a third of bankers reported that farm loan repayment rates were higher than the previous year, the largest share since 2012 (Chart 5). Renewals or extensions increased at the slowest pace since 2014 and tightening of credit standards also slowed. At the same time, the District measure of loan demand retracted for the first time since 2013 and fund availability expanded at the fastest pace since 2012. 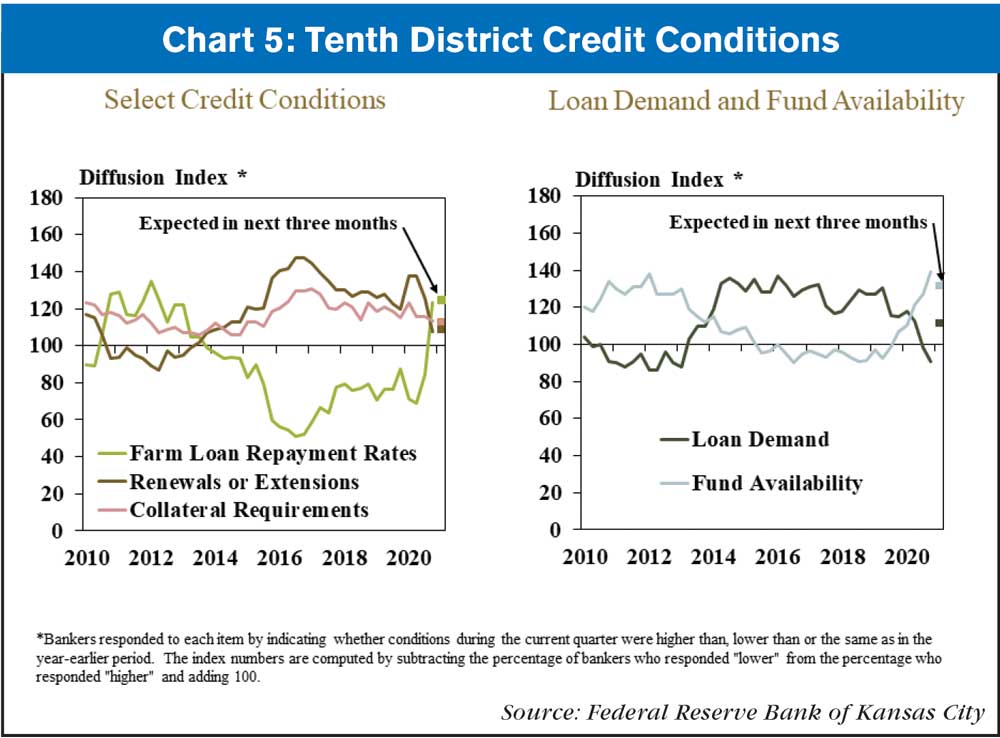 Much like farm income, borrower liquidity rebounded notably in all states except Oklahoma and the Mountain States. With improvement in cash flows and incomes, a majority of bankers in the region reported that farm borrower liquidity was higher than a year ago and that they expected conditions to remain similar in the next quarter (Chart 6). However, a majority of bankers in Oklahoma and the Mountain States indicated that liquidity was slightly less than the previous year. 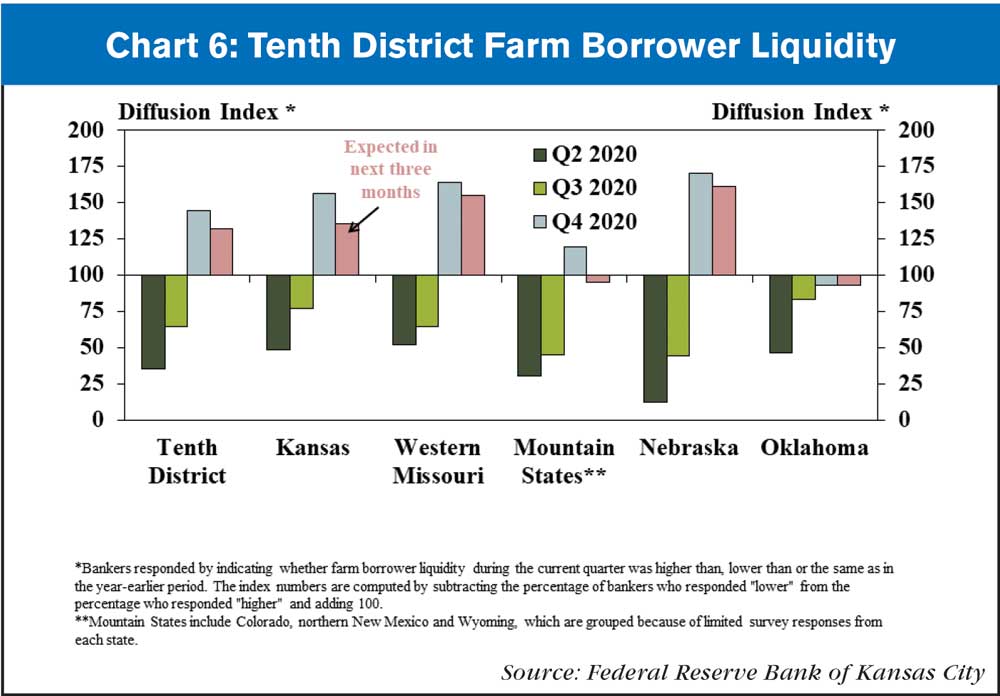 Better financial positions at the end of 2020 improved the ability of borrowers in most states to make loan payments. However, while the pace of deterioration slowed from previous quarters, the rate of loan repayment in Oklahoma continued to decline (Chart 7). Similar to other financial indicators, bankers were less optimistic about farm loan repayment rates in the most western and southern states of the District. 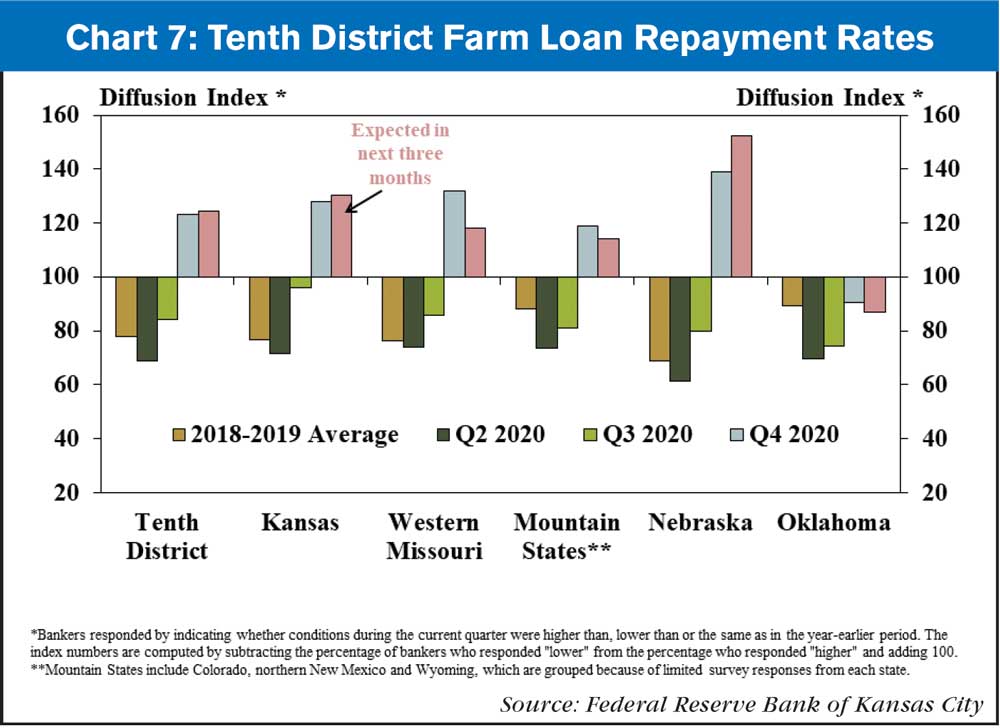 Alongside improved prospects for farm finances, an increase in farmland values across the region provided additional support to the sector. The value of all types of land increased an average of 4% from a year ago, the highest average increase across all land types in any quarter since 2014 (Chart 8). Cash rents for nonirrigated and irrigated cropland also increased, but at a slightly slower pace than the value of the land, and cash rents on ranchland continued to ease. 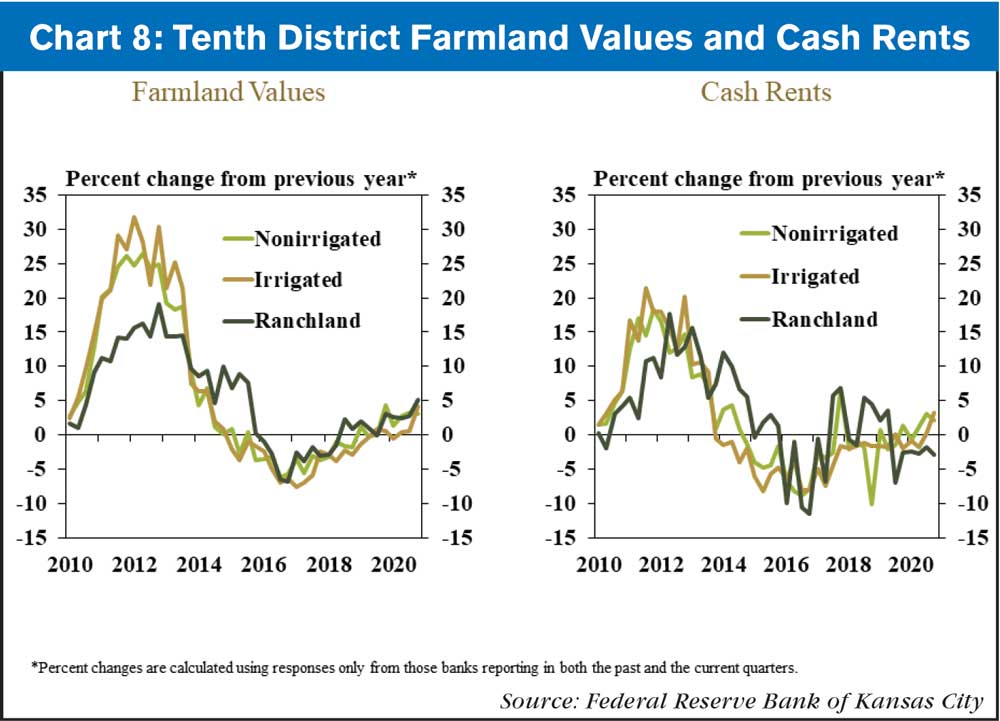 A decrease in interest rates and a modest increase in demand for farmland strengthened farm real estate markets. Demand for farmland increased, with producers accounting for a slightly higher share of land purchases than the prior two years (Chart 9). Lower interest rates likely also supported farm real estate markets by reducing financing costs and making farmland a more attractive investment opportunity. Interest rates continued to decline in the fourth quarter at a faster pace than the return to farmland ownership, or capitalization rate, suggesting a relatively greater incentive to own land and generate returns through leasing. 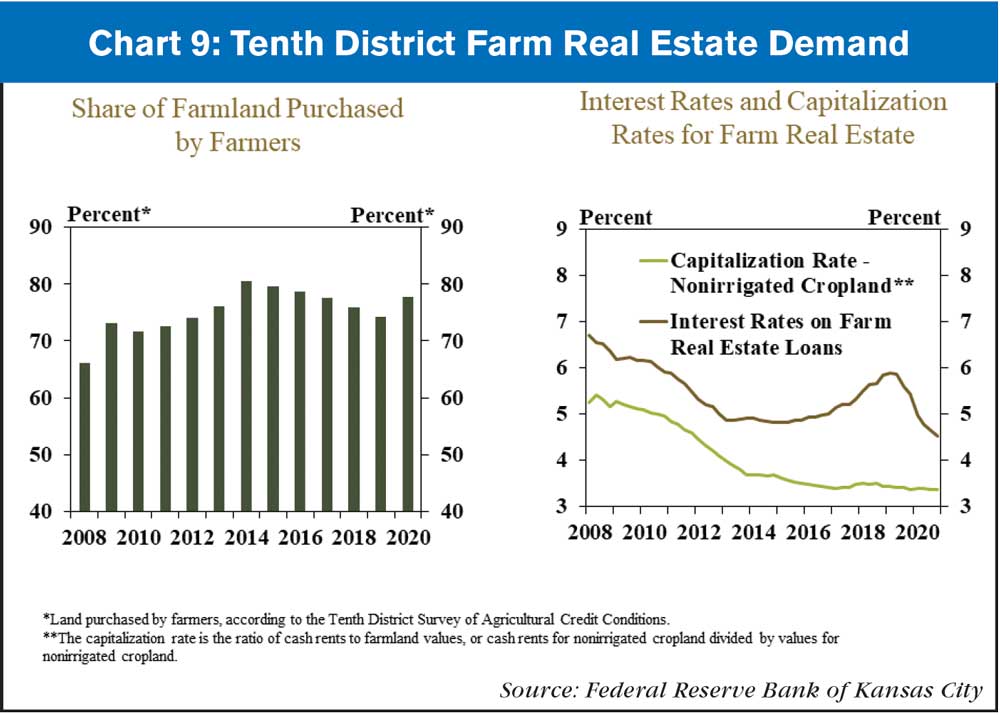 Agricultural real estate markets also were supported by a slightly lower volume of farmland sales in most states. Compared with a year ago, the volume of farmland sales declined slightly in the region overall and decreased or remained steady in all states except Nebraska (Chart 10). Fewer sales have limited the supply of farmland on the market and have put upward pressure on prices that buyers have been willing to pay. 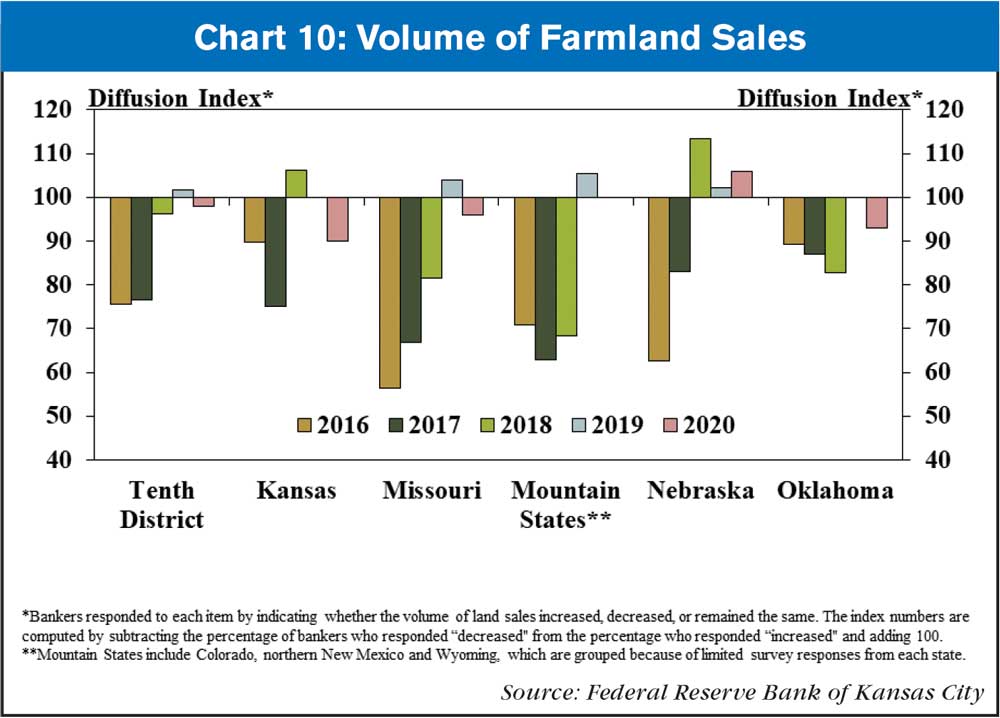 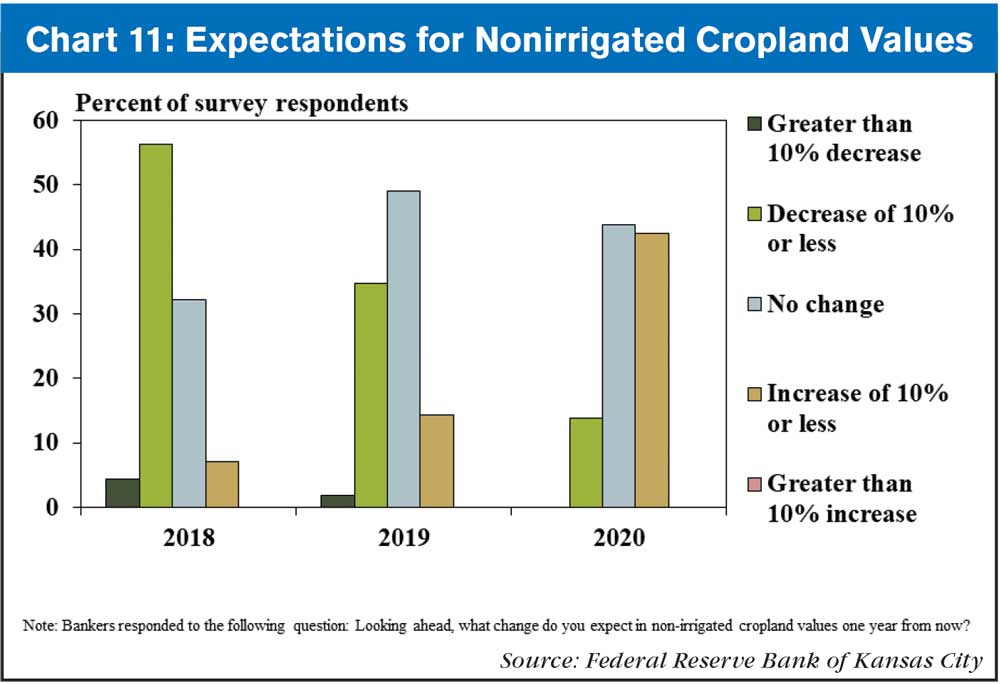 Increases in commodity prices at the end of 2020 and robust support from government payments boosted economic conditions in the agricultural sector in the fourth quarter. A majority of bankers in the District indicated that farm income was higher than a year ago for the first time in eight years, boosting liquidity and loan repayment capacity, and providing renewed support for farm real estate. Overall, agricultural conditions in the first quarter of 2021 in the Kansas City Fed region were poised to remain strong for the first time since 2013.