By Joe Mahon, Director, Regional Outreach at the Federal Reserve Bank of Minneapolis

Coming on the heels of a mild upturn in the third quarter of 2020, farmers and ranchers in the Ninth District saw dramatic improvement in the final three months to close out the year, according to the latest survey of agricultural lenders from the Federal Reserve Bank of Minneapolis. “2020 was much better than expected,” wrote a Minnesota banker, echoing the sentiments of peers across the region. “We had very good yields in our trade area, combined with better prices and government payments.”

Farm incomes and capital spending increased at the end of 2020, according to lenders responding to the Minneapolis Fed’s fourth-quarter (January) agricultural credit conditions survey. The bump in incomes also led to increased loan repayment rates, while loan demand, renewals, and extensions decreased. Farmland values increased on average from a year earlier, and cash rents ticked up as well. The outlook for the beginning of 2021 is positive, with survey respondents predicting further growth in farm incomes and spending.

Agricultural producers had their incomes bolstered by a confluence of favorable developments—good harvests in much of the district, a rally in commodity prices driven in part by international demand, and extra government payments through the Coronavirus Food Assistance Program, among others. As a result, more than three-quarters of lenders responding to the survey reported that farm incomes increased in the fourth quarter of 2020 compared with the same period a year earlier. Only 6% said incomes declined. Two in five lenders said capital spending by agricultural producers increased in the fourth quarter, and another third reported that it was flat. A majority of respondents indicated that farm household spending was unchanged, though roughly one-fifth said it increased. 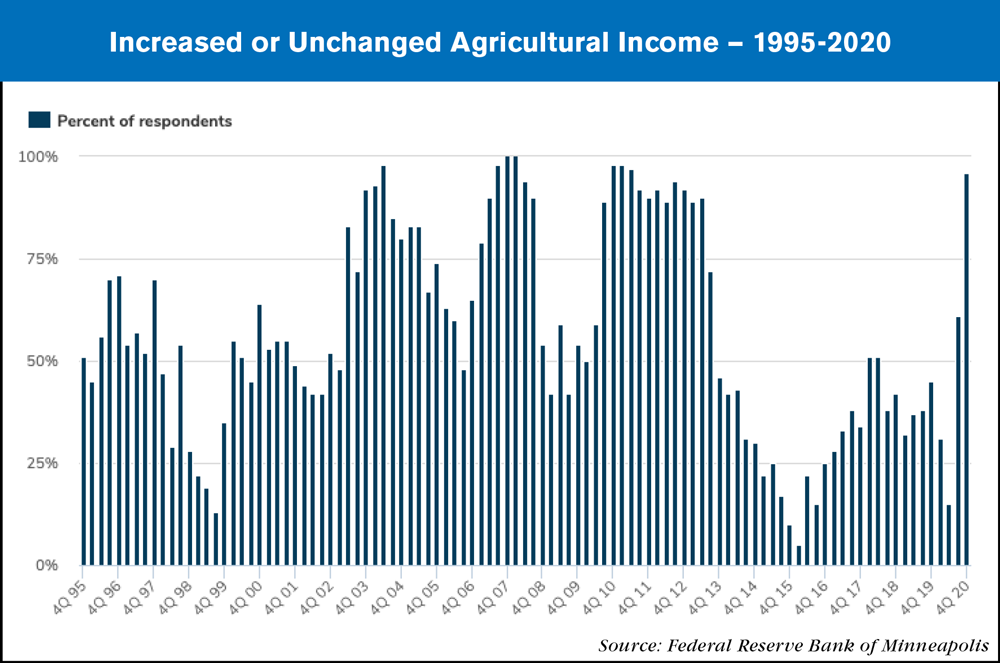 Consistent with improved financial conditions, loan repayment rates increased, while renewals were largely unchanged. Just under half of the lenders responding to the survey reported a greater rate of loan repayment from a year earlier, while an additional 47% said that repayment rates held steady. Two-thirds of respondents indicated that loan renewal or extension activity was unchanged, while 19% noted that renewals decreased.

About one-third of the bankers said demand for loans had decreased relative to a year earlier, while 45% reported no change. This was generally consistent across district states. Nearly all of the lenders reported no change in collateral requirements on loans, though 3% said they increased them. Fixed and variable interest rates on operating, machinery, and real estate loans each declined slightly on average from their third-quarter levels, according to respondents.

Similar to the third-quarter survey, cropland values increased moderately in the final 3 months of 2020, a reversal of the pattern of decline in recent years. Cash rents also increased. Nonirrigated cropland values increased 3.6% on average across the district compared with a year earlier, while cash rents for that land increased by 6.2% over 2019. Irrigated farmland values rose 6.9% on average, while ranchland values rose 2.9%. Lenders in North Dakota reported the largest increase in land values, with nonirrigated land up 8.5%, while Wisconsin, where the number of lenders responding was relatively small, logged a 6.6% decrease in those values.

A Montana lender pointed to an unexpected bump in demand for land due to the pandemic. “Ag real estate has seen an increase in value due to the influx of people from other states moving here during COVID and buying properties,” they wrote in a survey comment.

Given the role of recent commodity price spikes in bolstering farm incomes, some lenders expressed concerns about whether that trend would continue. Price swings were by far the biggest worry for the year ahead, according to results of a special question on the survey. Two in five lenders cited prices as their top concern for 2021, followed by 24% citing growing problems (severe weather or declining yields). Trade conflict and declining government support were also widely cited as paramount concerns by 13% and 11% of respondents, respectively.

Expectations heading into the new year were generally optimistic. Across the district, 60% of lenders predicted that farm income will increase in the first quarter of 2021, while another 30% expected stable income. The outlook for capital spending is also positive, with 40% expecting increases, but just over half expecting no change in farm household spending. Expectations call for increased demand for loans on balance in the upcoming quarter, though slightly more than half of respondents expect no change in loan demand, compared with a third who foresee an increase. The outlook for loan repayment was also greater on balance, but 58% of lenders didn’t see it changing. They also expected loan renewals and extensions to remain steady, and nearly all said collateral requirements would remain unchanged. 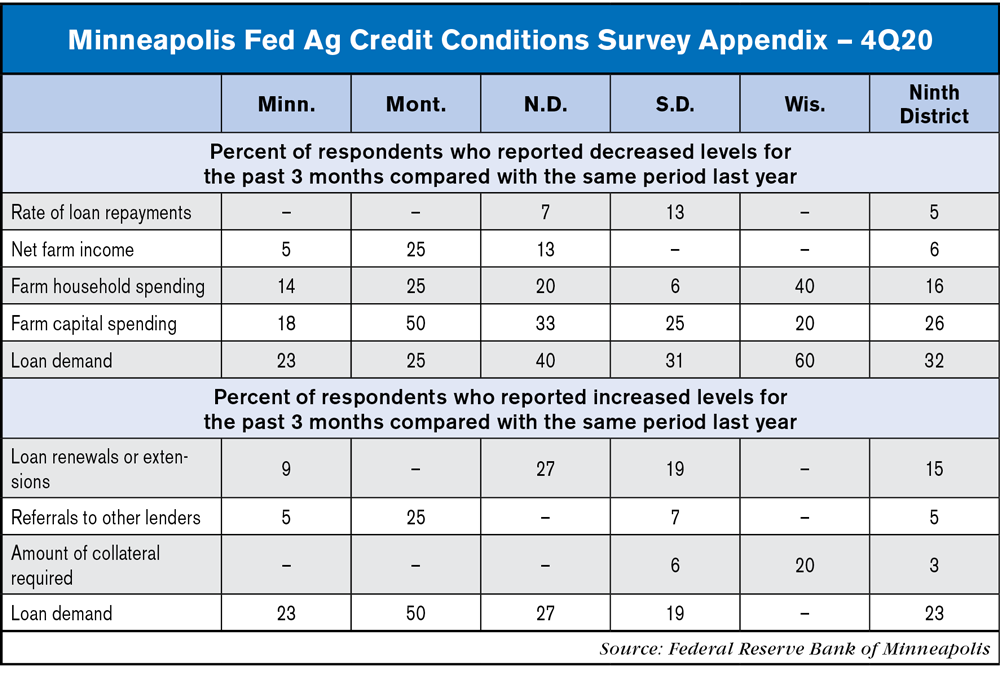