The latest episode of On the Record is now available! In this week's episode we take a look at some of the results from the Fall 2020 Agricultural Lender Survey Report, which points to over half of borrowers being profitable in 2020. In the Technology Corner, Jack Zemlicka discusses how technology will influence large corporate farms and smaller operations alike. Also in this episode, Ag Growth International reports growth in 3Q20, the Kansas City and Chicago Federal Reserve Banks report lower farm loan demand and dealer sentiment among European dealers is on the rise.

On the Record is brought to you by Ingersoll.

Producers around the globe who till and plant their soil with Ingersoll products enjoy a powerful and real advantage. Ingersoll disc blades and coulters are proven season after season to improve farm productivity and profitability.

With a modern North American manufacturing location that has produced tillage and planting equipment and components for over 100 years, Ingersoll is dedicated to continue providing the very best to their worldwide customers through innovative products.

Half of Ag Borrows Profitable in 2020

According to the Fall 2020 Agricultural Lender Survey Report from the American Bankers Assn. and Farmer Mac, on average, just under 51% of agricultural borrowers were profitable in 2020, down from 57% last year. Looking toward 2021, about half of the lenders surveyed do not expect borrower profitability to improve next year. Lenders were most concerned about the grain, dairy and cattle sectors.

Despite the uncertainty through 2020, just over 31% of lenders expect borrowers to make investments in agricultural technology, with similar expectations for 2021 (27.3%). The survey results suggest some regional differences: almost half of lenders in the South expected farm technology investments to increase through 2020, while less than 30% of lenders from Cornbelt and Plains states said the same. 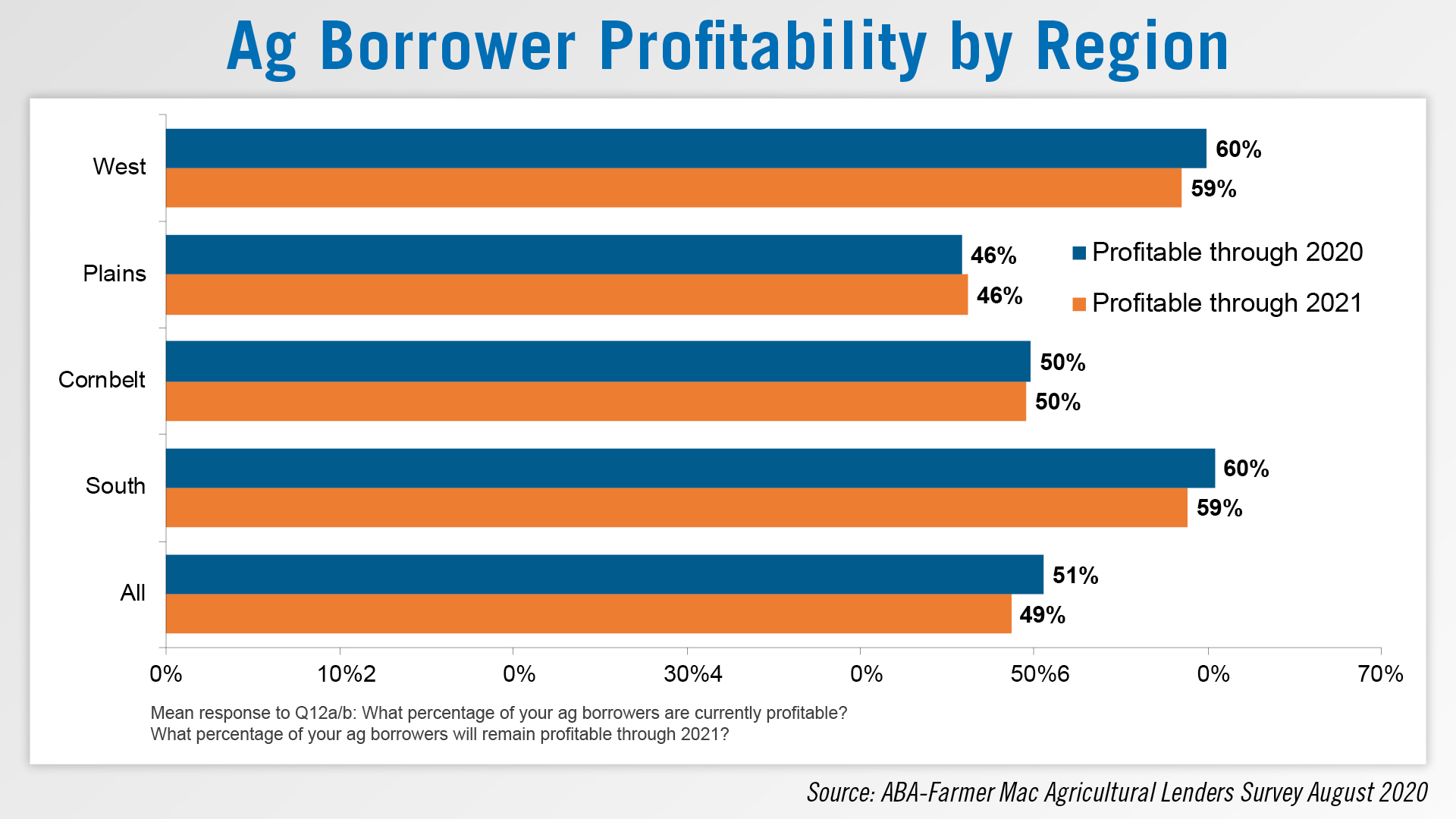 According to the report, producers are also asking lenders about funding to develop alternative sources of income or to implement cost mitigation. Forty-three percent of survey respondents reported receiving inquiries from their borrowers about financing hemp production and just over one-third of respondents said that borrowers are asking about financing for renewable energy projects.

This week’s Dealers on the Move are Johnson Tractor and McCullough Implement.

Johnson Tractor, a Janesville, Wis., based Case IH and Kubota dealership, has acquired Kubota dealership A.A. Anderson in Harvard, Ill. This brings Johnson Equipment’s total stores to 5, with 2 in Wisconsin and now 3 in Illinois.

According to the USDA’s Farm and Land in Farms report published earlier this year, the average U.S. farm size has increased about 10 acres from 2012-2019, to 444.

But the number of farms has decreased by more than 86,000 during that same span. There are a variety of factors contributing to the decrease and the last few years have further challenged some small and mid-size operations to remain profitable.

Consolidation is a trend that Idaho farmer and business consultant Dick Wittman expects to continue in agriculture. The ability to keep pace with the profitability, production and economic resources of larger, corporate farms could force smaller operations to be more efficient with use of technology and equipment, Wittman says.

“The technology we have in ag today is enabling us with a very few number of people to farm several thousand acres very efficiently. Those who have had strong margin in the past, who had a lot of expensive toys that mostly sat in machine sheds and got looked at, they are going to be challenged to recognize that they’re not full-time farms. They are part-time farms and the only way they can stay in business is to share some of those resources with neighbors to get some more hours on combines and sprayers or look at custom hiring or renting.”

You can hear more from Dick Wittman who will part of our farmer panel at the AEI 2021 Executive Briefing. For more information on the virtual event, visit www.AgEquipmentIntelligence.com.

Ag Growth International, a manufacturer of grain handling equipment and other products, released its third quarter earnings on Nov. 12. Thanks to what the company called “continued robust performance in North American Farm markets, EMEA, Brazil and India” AGI had a record third quarter for sales. 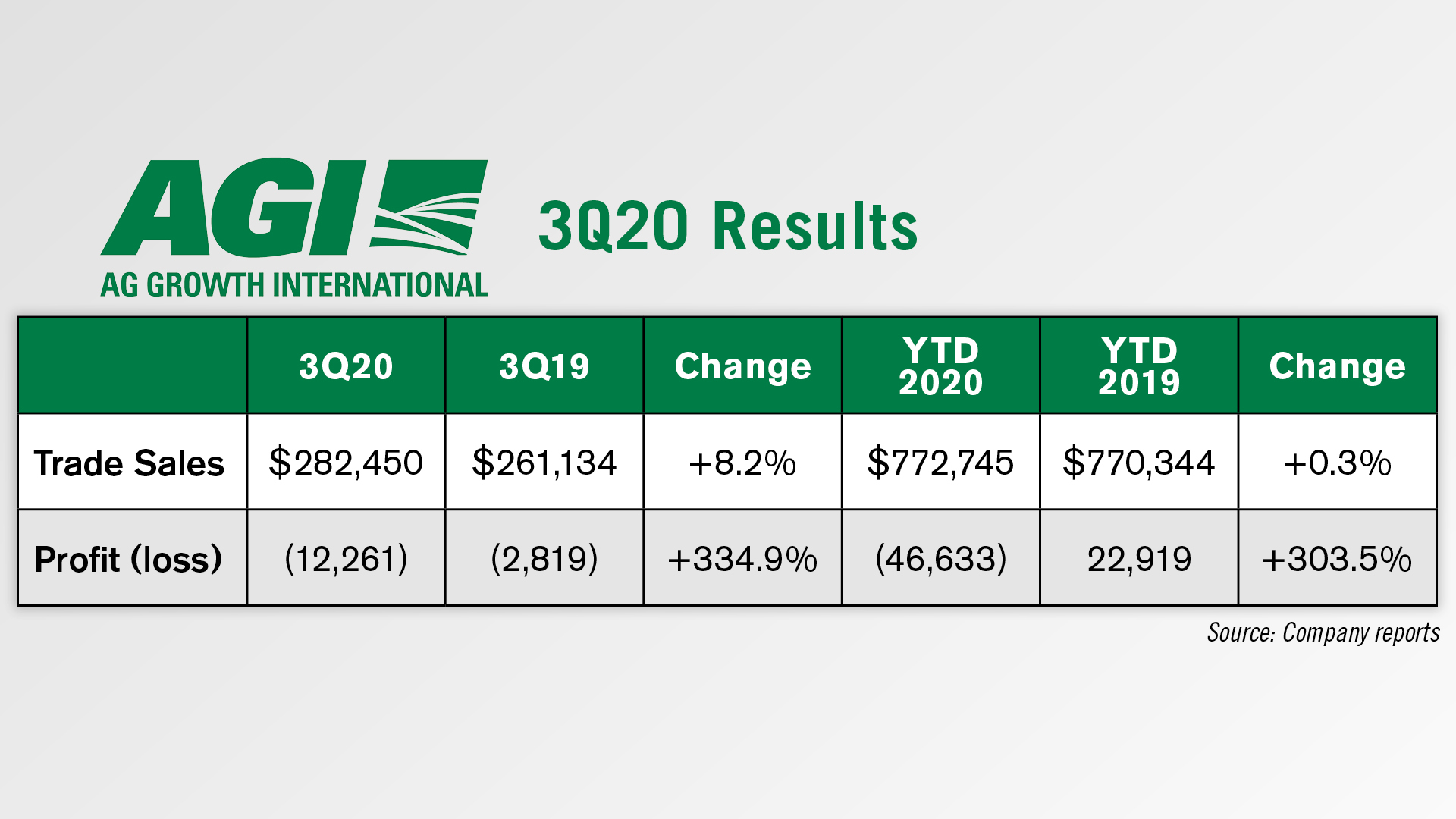 Total sales for the quarter were $282.5 million, up just over 8% from the third quarter of 2019. Farm sales were up 24% compared to the third quarter of last year and year to date are up 9%. According to AGI, annual early order programs that launched across Farm products in September are expected to be positive as dealers replenish inventory in preparation for 2021 and consequently management anticipates Farm Sales to be slightly higher than 2019 levels in the fourth quarter and positioning us well for the first half of 2021.

European Dealer Sentiment on the Rise

According to the European Agricultural Machinery Assn., European dealer sentiment increased in November for the seventh month in a row. 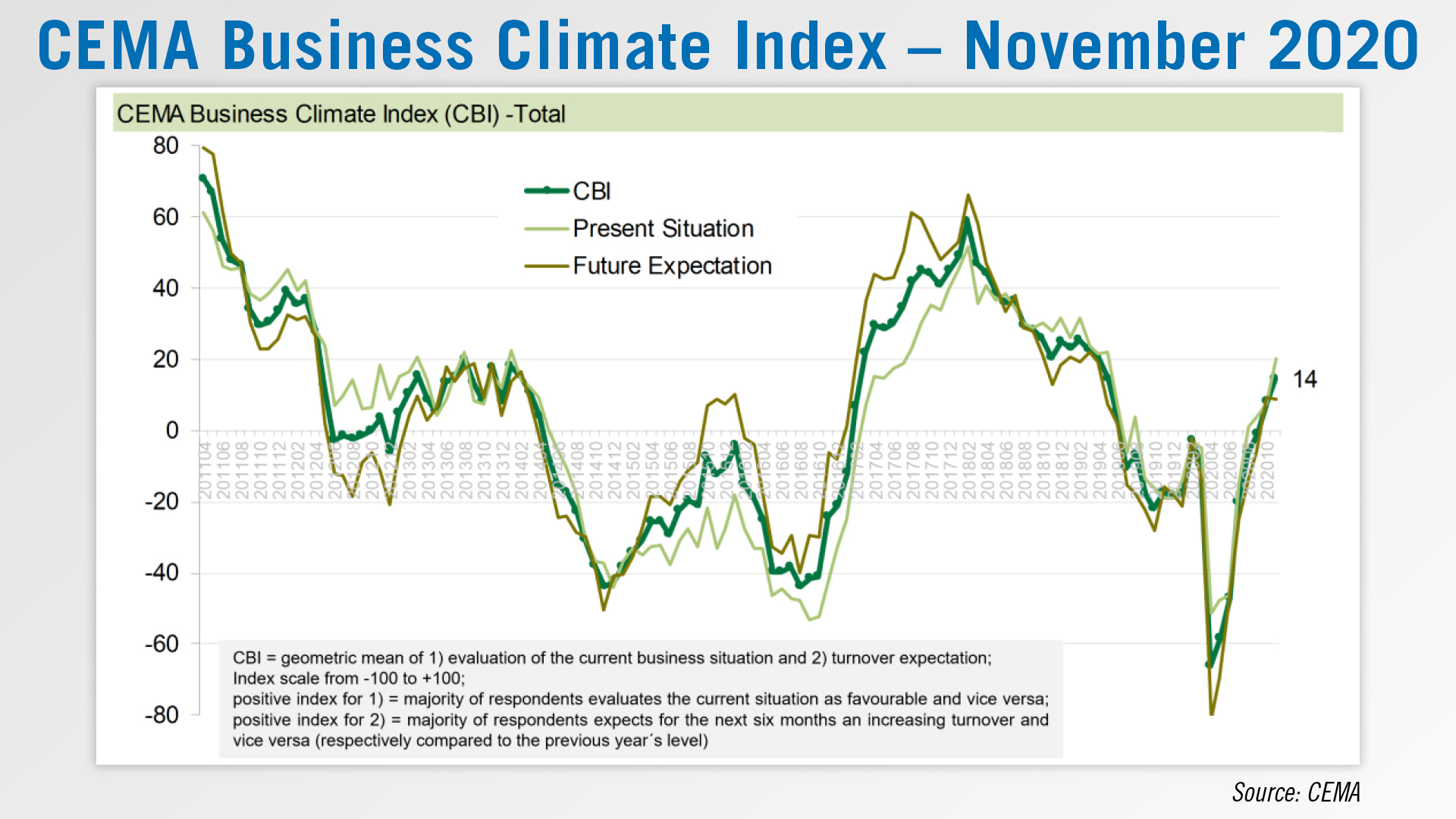 The association’s November update to its Business Climate Index showed a reading of 14, the highest sentiment recorded since April 2019. The increase in sentiment was primarily attributed to an improvement in dealers’ evaluation of current business conditions, with only 15% considering current conditions unfavorable. By segment, only the lawn and garden and livestock equipment segments posted negative results in November.

By country, it was reported that confidence remains stable in the major markets of France, Germany and Italy, with lower confidence reported in several Eastern European markets, as well as the UK. 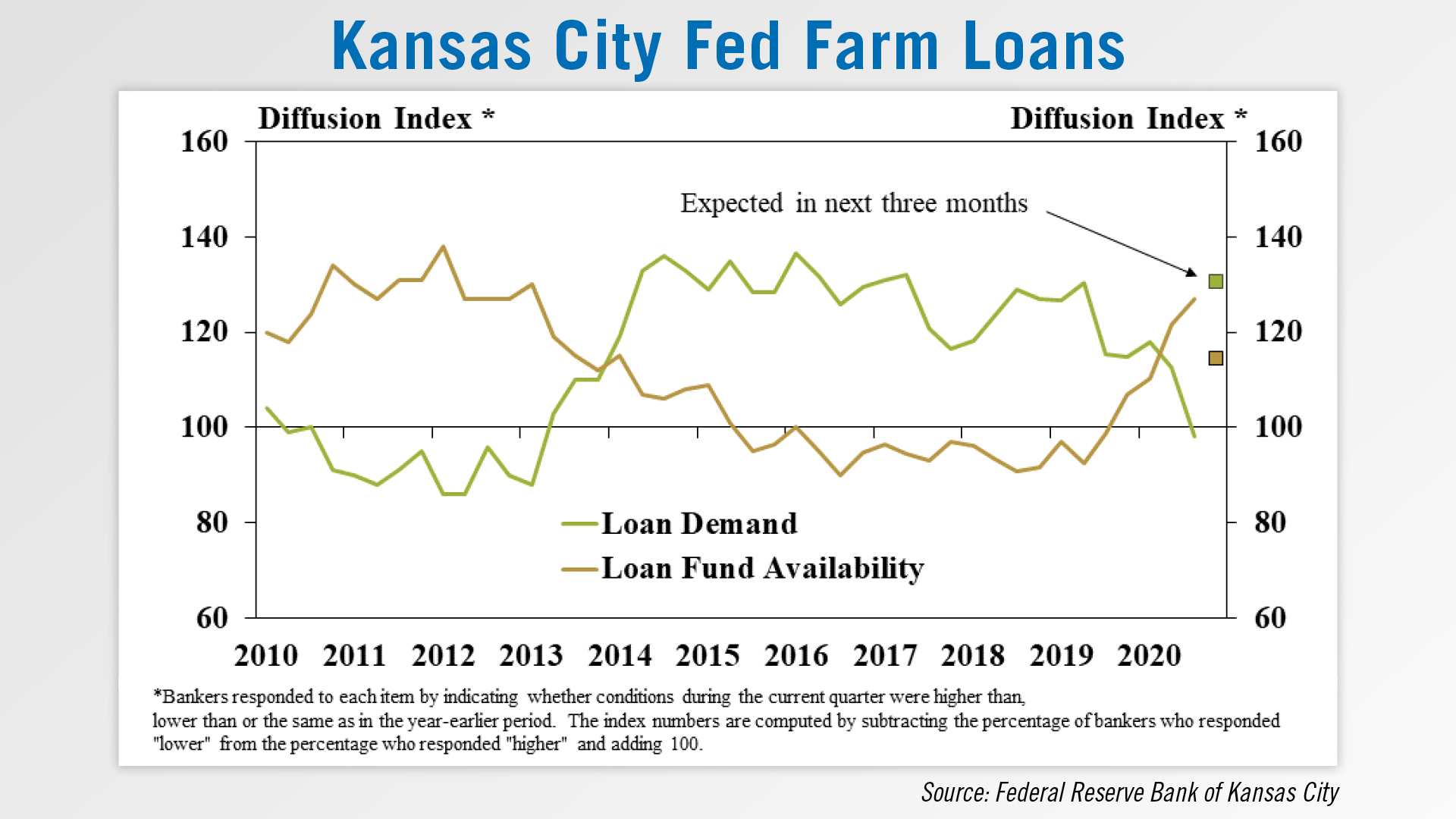 Kansas City reported softened demand for farm loans in the third quarter, with about 25% of respondents reporting lower loan demand year-over-year. This was also the first time more bankers reported a decline in loan activity than an increase since 2013. 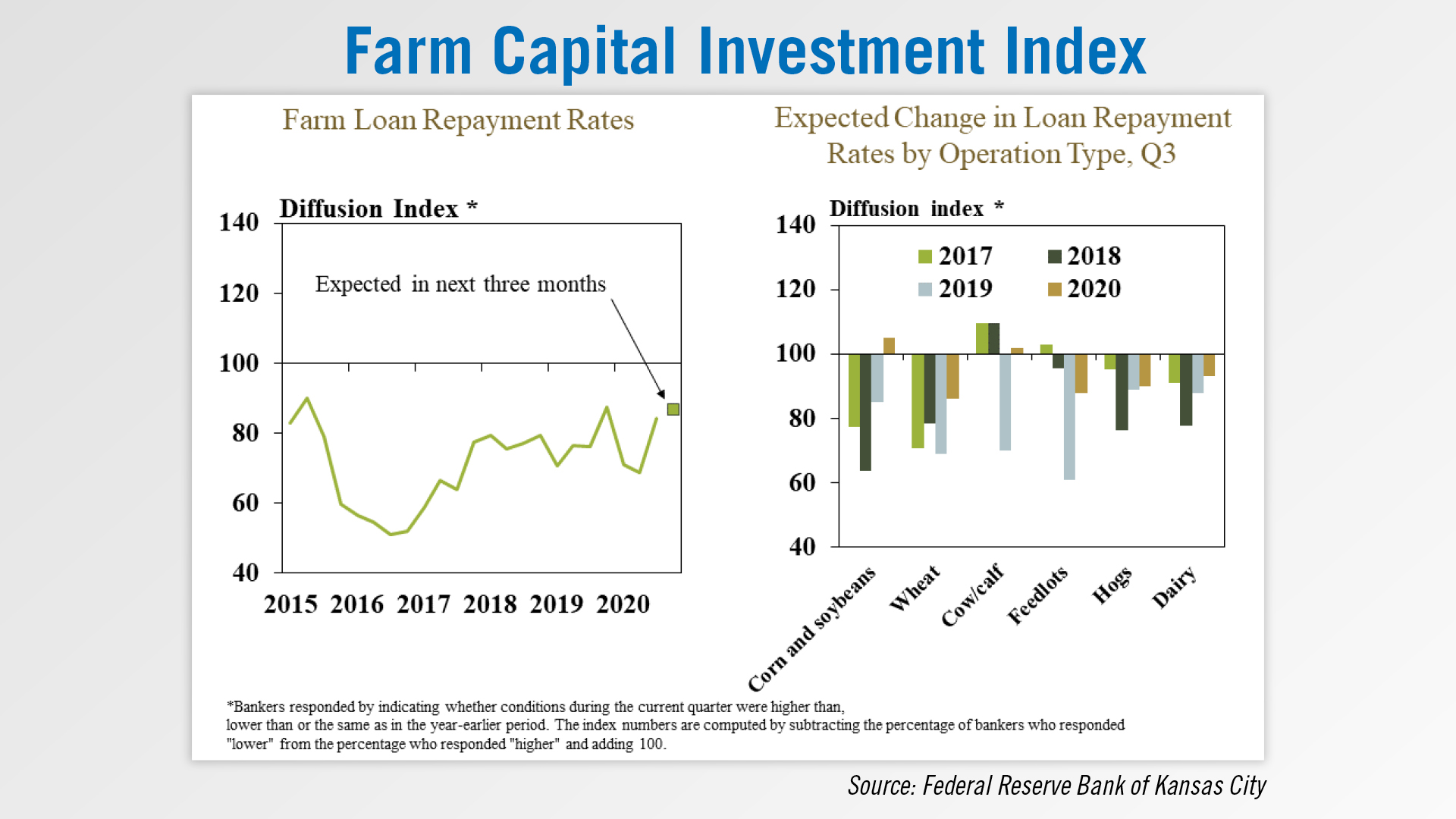 Kansas City also reported that credit conditions continued to deteriorate in the third quarter, but at a more gradual pace than in the second quarter. Some 20% of respondents reported declining loan repayment rates vs. 35% saying the same in the second quarter. Problem loan rates dropped in the third quarter, with the average share of farm loans being monitored for potential problems reaching its lowest level in 5 years.

The Chicago Federal Reserve reported weaker demand year-over-year for farm loans in the third quarter for the first time in 7 years. 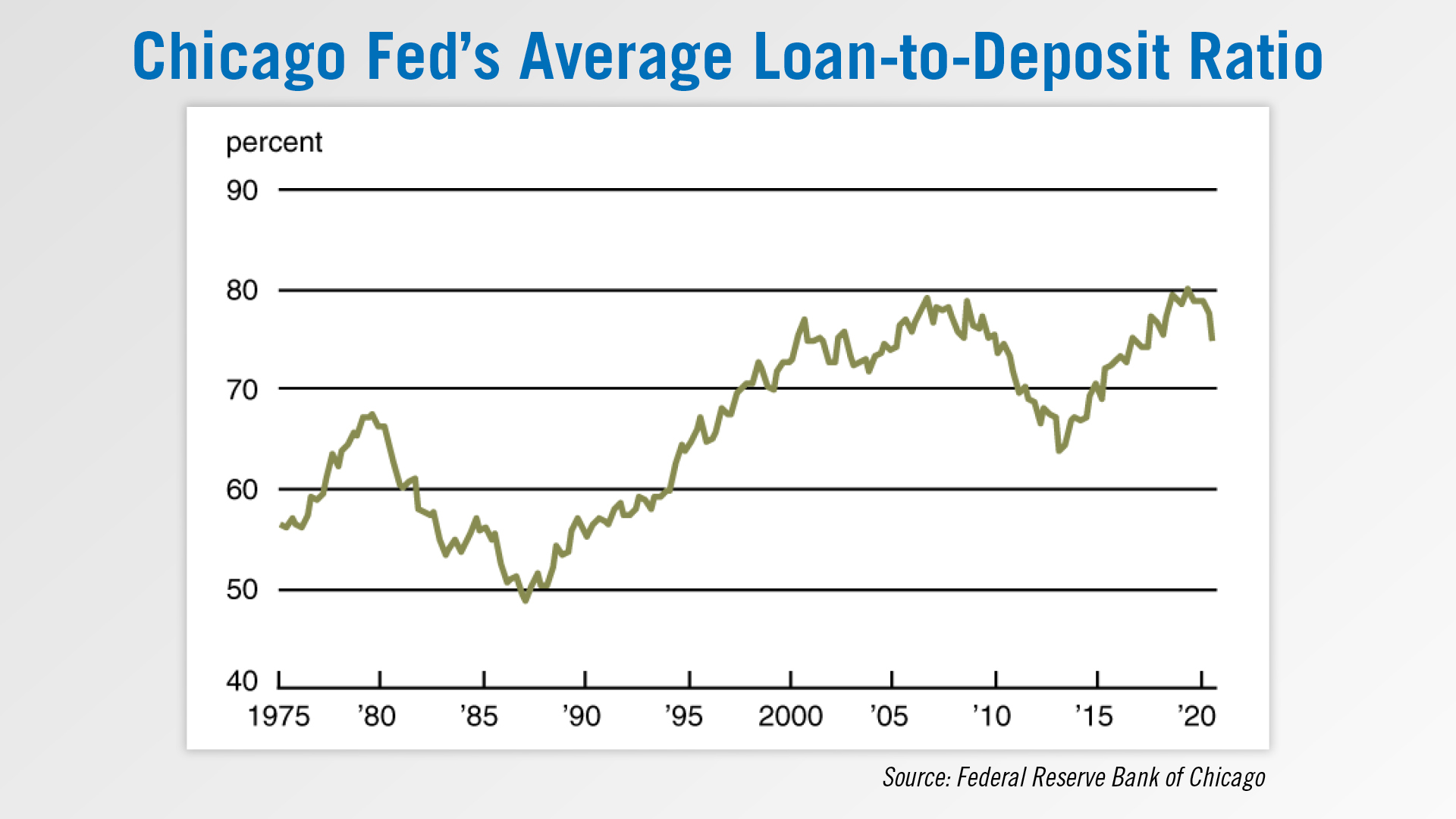