The contract between the two companies states that the Cognitive Agro Pilot software and hardware complex will be installed on 242 combines used by Rusagro in Belgorod, Tambov, Kursk and Orel regions, as well as in Primorsky Krai. The machinery will be equipped with the system gradually during the harvesting campaigns of 2020-21. The first complexes will be installed in the middle of June.

This partnership between Rusagro and Cognitive Pilot is carried out within the federal project "Digital Technologies" (part of the national program "Digital Economy of the Russian Federation"), which is implemented by the Skolkovo Foundation.

“Interestingly, the large-scale adoption of the system coincided with the year when Russia is expecting record wheat crops. We have used all the resources to produce a good result during this year’s harvest time,” adds Roman Shkoller, CEO of the Agriculture Business Division at Rusagro.According to Rusagro’s chairman of the board, Vadim Moshkovich, “Equipping the fleet of combine harvesters with autonomous AI-based control systems will increase the efficiency of harvesting significantly. Improving the efficiency of agricultural enterprises through the use of the latest self-driving technologies will bring the agricultural holding’s productivity to a new level, letting the work of the entire Rusagro team to have a quality breakthrough,” comments Moshkovich.

According to the project specifications, the autonomous system will control a combine’s unmanned movement:

The system will also be automatically identifying obstacles along the route and informing combine operators about obstacles or route failures in case of manual control. Operators will have access to trajectory tracking in real time for each solution-equipped combine.

"So far, combines still need drivers. However, the automatic control system will enable them to focus more on managing and controlling other harvesting parameters, like the angle of the header, setting up the threshing process, and cleaning the grain. The edge capture when controlling a harvester by the AI system is stable at no more than 20 cm, which lets you avoid unnecessary passes and fuel losses. In general, the use of Cognitive Agro Pilot enables stakeholders to cut grain costs by 3–5% and drive grain harvest losses down by up to two times. In the future, we plan to create a completely unmanned system,” says Uskova.

Rusagro is one of the world’s leading agriculture companies in terms of "digitalization" and implementation of innovation. "Our strategy,” explains Roman Shkoller, “Is aimed at increasing the EBITDA per hectare figure, which is a clone of unit economics in the agricultural business. Digitization is the only way to achieve it and build a truly transparent and efficient operating model, which can then be scaled further.

The project is being developed within the ecosystem of Sberbank and it’s the world’s largest project seeking one-time robotization of farm equipment in four climate zones at once within one agricultural holding company. 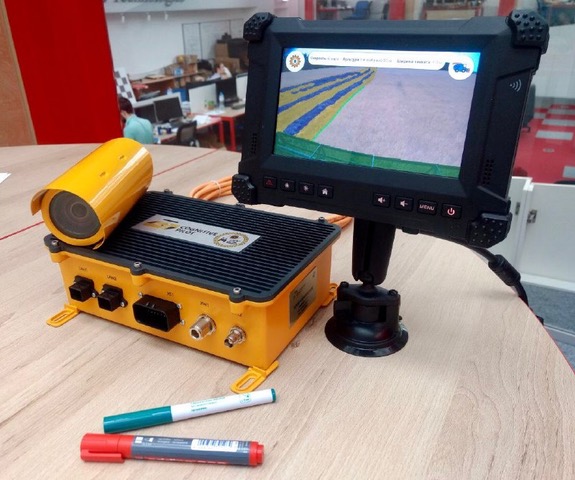 "A key partner of the Russian agriculture sector, Sberbank keeps working hard on digital technologies, including artificial intelligence ones, for agricultural companies. The scale of the signed contract, which is a world record for the automation of a fleet of agricultural machinery, reflects the demand for this type of technology and will benefit the accelerated development of this competence in Russia,"  explains Alexander Vedyakhin, first deputy chairman of the Executive Board of Sberbank.

Cognitive Agro Pilot is an AI-based autonomous driving system for agricultural machinery — grain harvesters, tractors, sprayers — that lets machinery operators focus on the quality of harvesting while leaving the robot assistant to run the machinery itself. The system analyzes images from just one video camera and by using a convolutional neural network designed for agronomic purposes understands the types and positions of objects facing the machinery, builds the correct trajectory of the combine, and sends commands to perform maneuvers. This sets Cognitive Agro Pilot apart from foreign solutions, which generally use a whole set of sensors in their models, like laser scanners for moving along the field’s edge, stereo cameras for windrows, etc.

Cognitive Agro Pilot ensures safe operations in harsh weather conditions and with any light intensity. The solution does not have a GPS navigation system at the core of its control model, which lets it detect obstacles, including people, animals, metallic objects, and stones along the way, and enables it to operate on the territories with a weak satellite signal. The suite being installed on combine harvesters under the Rusargo project includes an onboard computing unit, a video camera, a display, a set of connecting cables, and other elements of the control system.

The Cognitive Agro Pilot system has already been successfully installed and tested in the United States, Brazil and China, as well as in several Russian regions, including Tomsk Region, Kurgan Region, Belgorod Region, the Republic of Tatarstan and others. In 2019 the solution won the prestigious international AVT ACES AWARD, organized by the Autonomous Vehicle Technology magazine.