The latest episode of On the Record is now available! In this week’s episode, we discuss Ag Equipment Intelligence’s soon to be released Big Dealer Report. In the Technology Corner, Jack Zemlicka looks into a CoBank’s report that suggests wireless network sharing could be an affordable way to expand digital coverage. Also in this episode: a look at first quarter farm equipment sales compared to last year, Art’s Way’s latest earnings and a big drop in farmer sentiment amid the COVID-19 crisis.

In an environment marked by trade conflicts, the coronavirus outbreak and ongoing low commodity prices, North American agriculture has few assurances about what’s ahead. But the one thing they can count on is dealer consolidation.

In the past year, the number of farm equipment dealerships that operate 5 or more ag store locations increased by 4 from 187 to 191, according to Ag Equipment Intelligence’s 2020 Big Dealer Report. 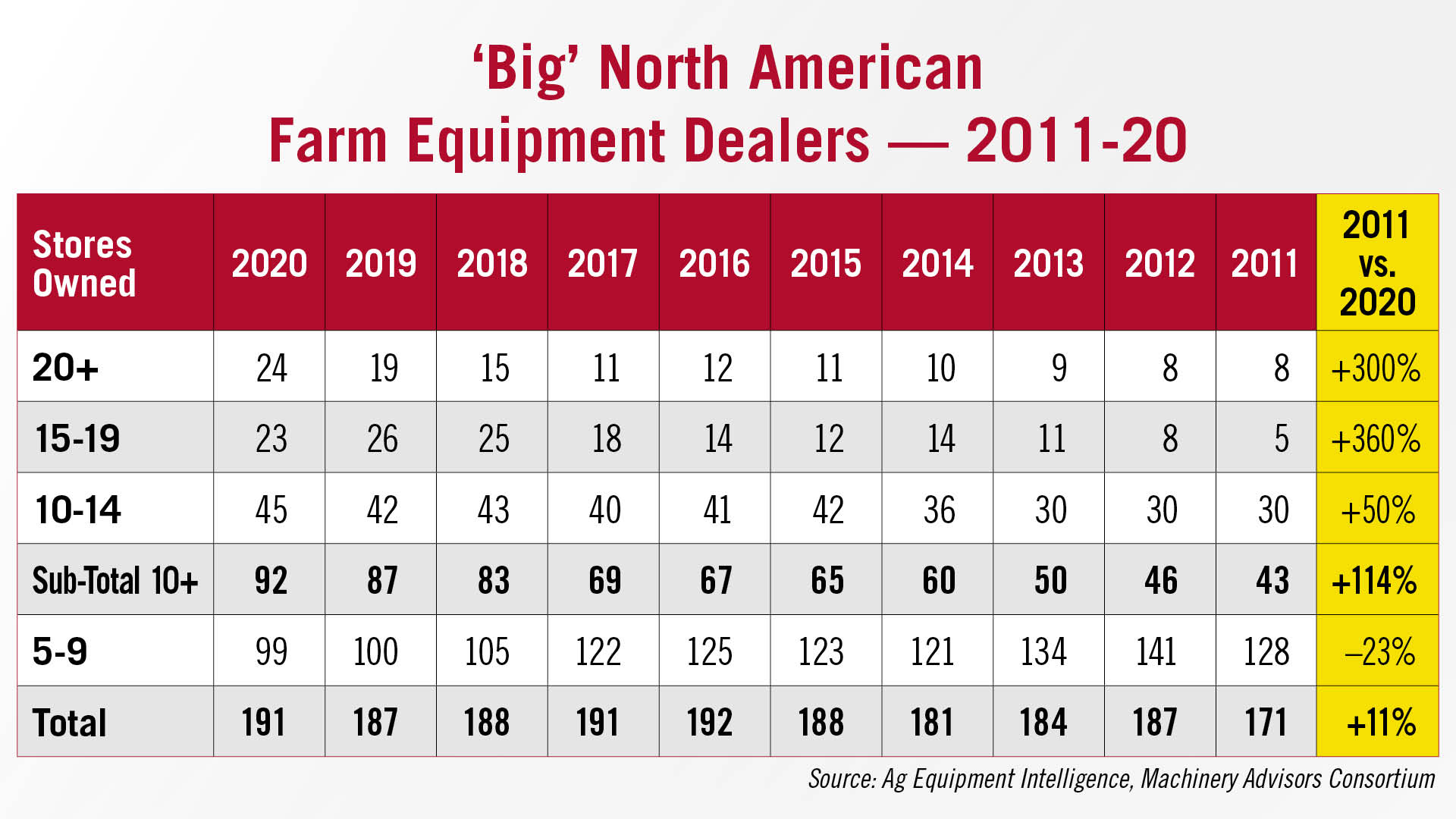 The impact of the growth of biggest dealers can also be seen in the number of stores they operate. In 2011, 13 dealership networks with 15 or more store locations operated an estimated 311 stores. This year, those with 15 or more stores has grown to 47 groups that operate nearly 1,100 individual store locations. On average, these Big Dealers operate slightly more than 23 locations each.

The 2020 Big Dealer report will be issued to Ag Equipment Intelligence subscribers and available to others next week.

A Shared Solution to Rural Broadband

Improving the reach and reliability of digital broadband into rural areas, including farm operations in less densely populated parts of the country, remains a challenge.

But a potentially cost-effective solution outlined in a new report from CoBank’s Knowledge Exchange division suggests that wireless network sharing could be an affordable way to expand digital coverage.

Network sharing is a way for national wireless operators to reduce their network cost structure in rural America. The average cost of a new tower can cost upwards of $200,000 for a single company. Splitting the cost among 3 companies would allow operators to provide coverage in rural areas at a third of the cost, Johnston says.

One of the primary benefits for the farm equipment dealers would be increased market opportunity to expand precision product and service revenue. 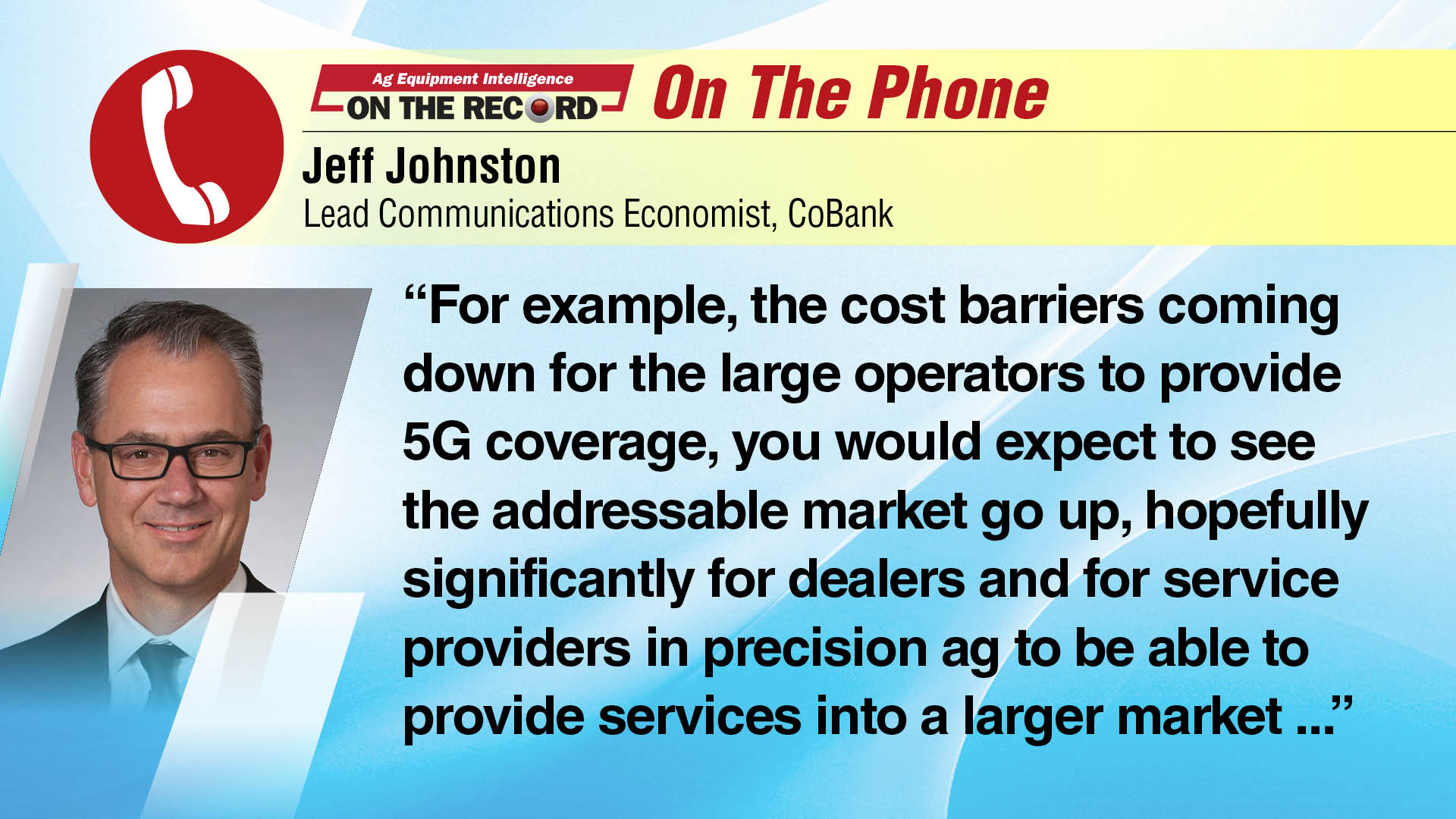 Johnston also acknowledges the solution has barriers to getting widespread buy in, including a potential reluctance by large tower owners to allow network sharing because less equipment on a tower equates to less revenue for operators.

The first quarter of 2020 ended on a sour note for sales of farm tractors and combines in both the U.S. and Canada. All equipment categories in March, except for over 100 horsepower tractors in Canada, were down double digits for the month, according to sales figures released by the Assn. of Equipment Manufacturers. 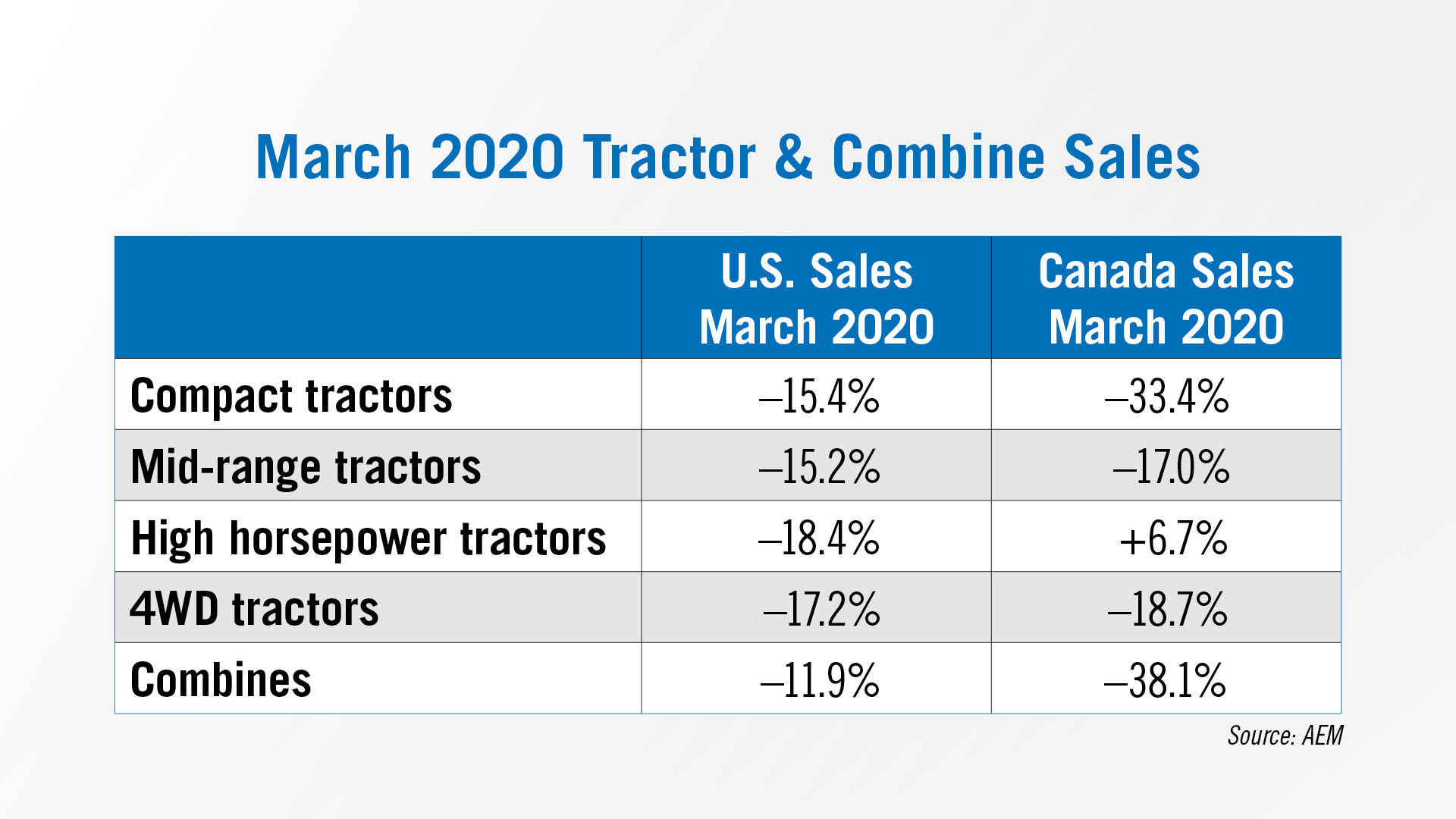 The most telling sign for sales was the drop off in sales of the under 40 horsepower tractor category. This equipment is often purchased by residential consumers and hobby farmers who are likely experiencing the early pressures from COVID-19, according to analysts. The compact tractor sales decline in March was the largest since October 2009, more than 10 years ago.

For the first quarter of 2020 vs. the same period in 2019, ag equipment sales in the U.S. were improved overall compared to March figures. But first quarter sales in Canada were mixed and generally continued the trend Canadian ag machinery dealers have been experiencing during the past 2 years or more. 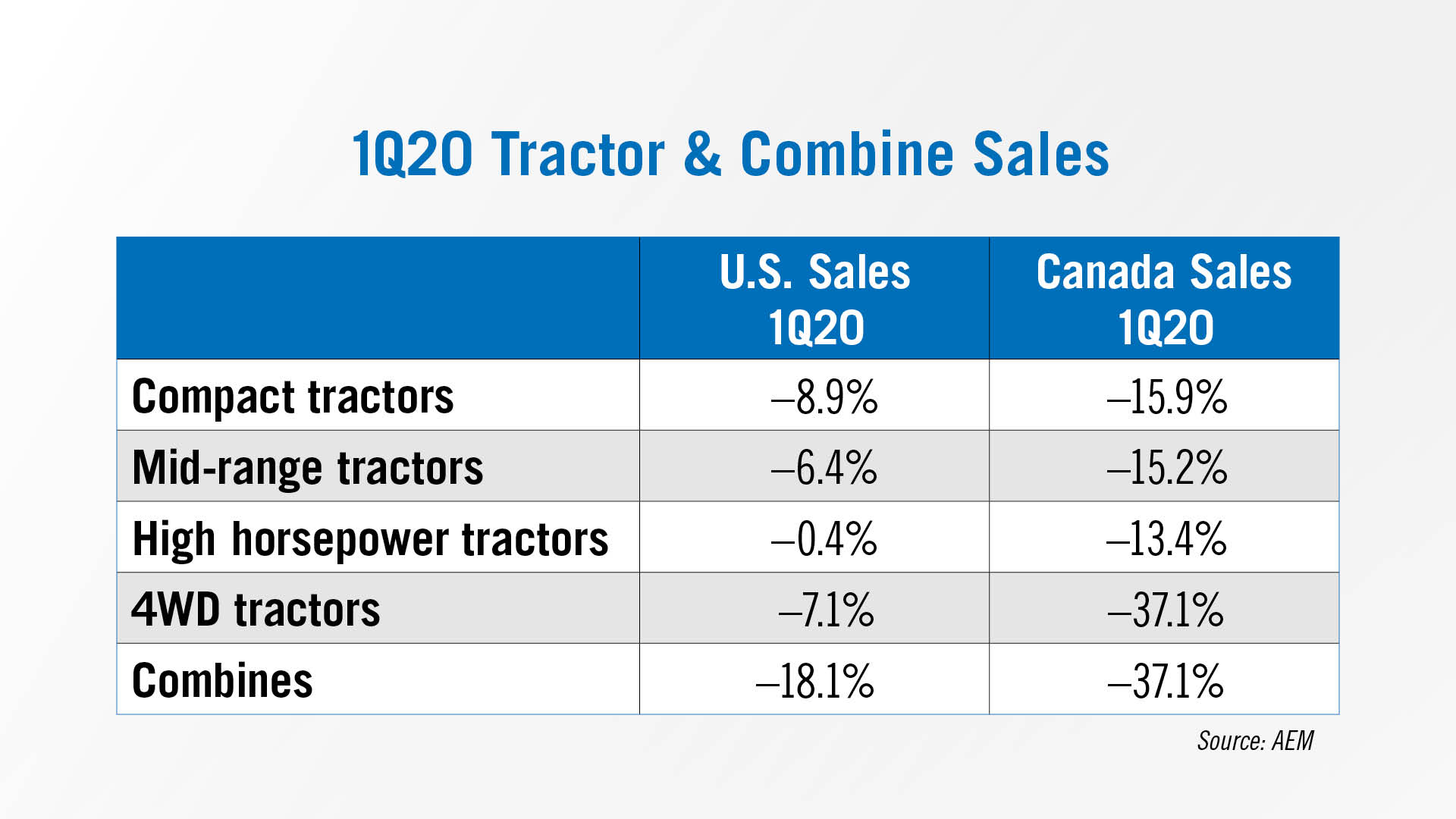 Sales of tractors over 100 horsepower were down by less than 1% in the U.S. and off by 13.4% in Canada. Year-to-date 4WD tractor sales in the U.S. were off by about 7%, but down by more than 37% in Canada during the first quarter of the year.

Through the first 3 months of the year, U.S. combine sales are off slightly more than 18%, but Canadian sales of harvesters were 37% lower compared to the first quarter of 2019.

Art’s Way Manufacturing announced its financial results for the first quarter of its fiscal year 2020 on April 13. 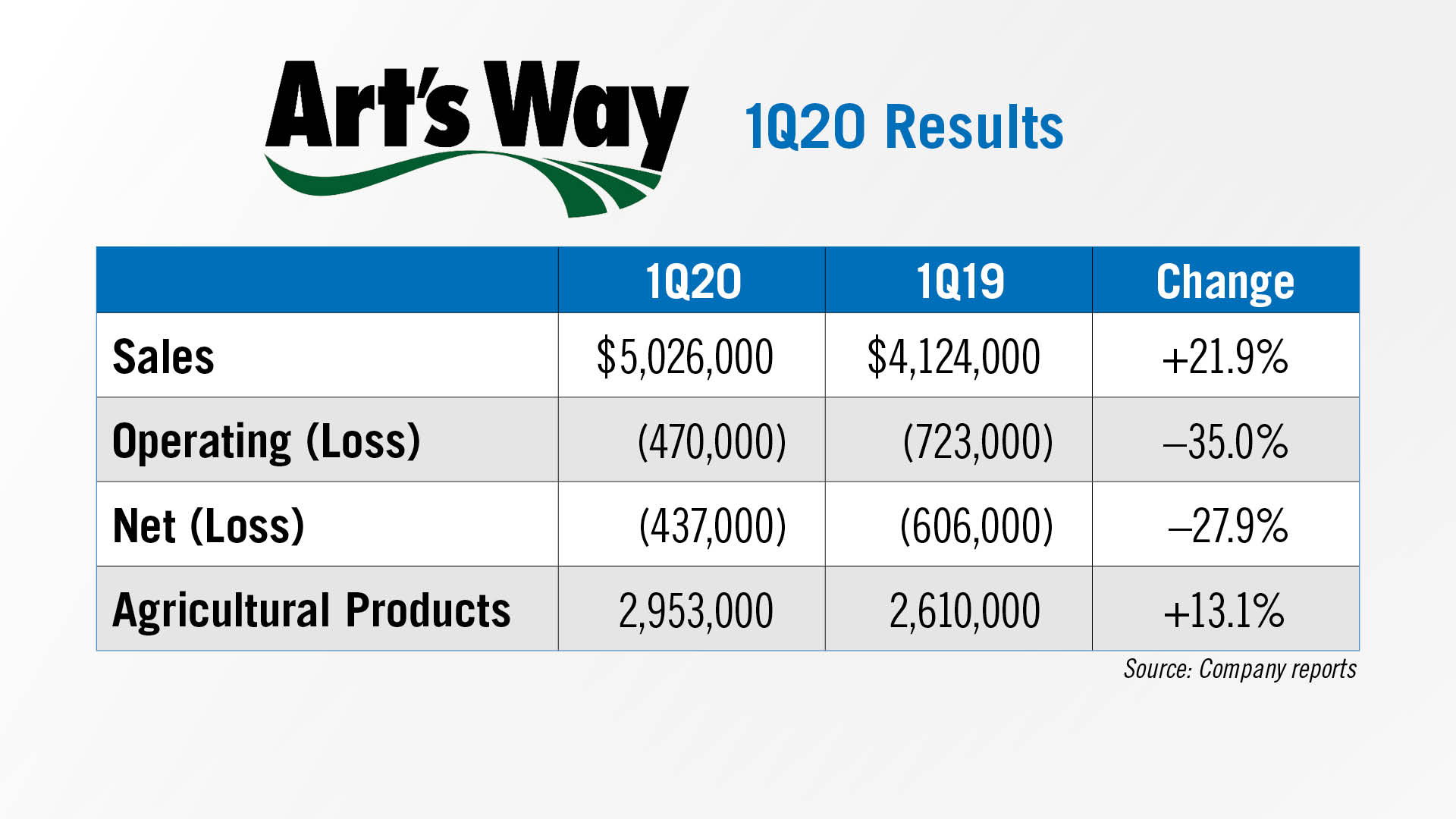 Consolidated sales for the first quarter were $5 million, up 21.9% from the $4.1 million reported during the same period in fiscal 2019, an increase of $902,000. The company says the increase is due to increased sales across all three of the company’s business segments. Consolidated net loss for the quarter was $437,000, compared to net loss of $606,000 for the same period in fiscal 2019.

First quarter sales in the Agricultural Products segment were $3 million, up 13.1% or $343,000 compared to $2.6 million for the same period in fiscal 2019. The company said the revenue improvement was due to increased demand across manure spreader, dump box and grinder product lines.

Chairman of the Art's Way Board of Directors, Marc McConnell, said the company lowered its expectations for the year due to the impact of COVID-19. “The impact of COVID-19 has brought new challenges to our business and leaves us uncertain as to what to expect from a demand perspective for the balance of the year.”

Purdue’s Ag Economy Barometer saw the largest one-month decline in its history in March. The reading for the month was 121, down 47 points from February. 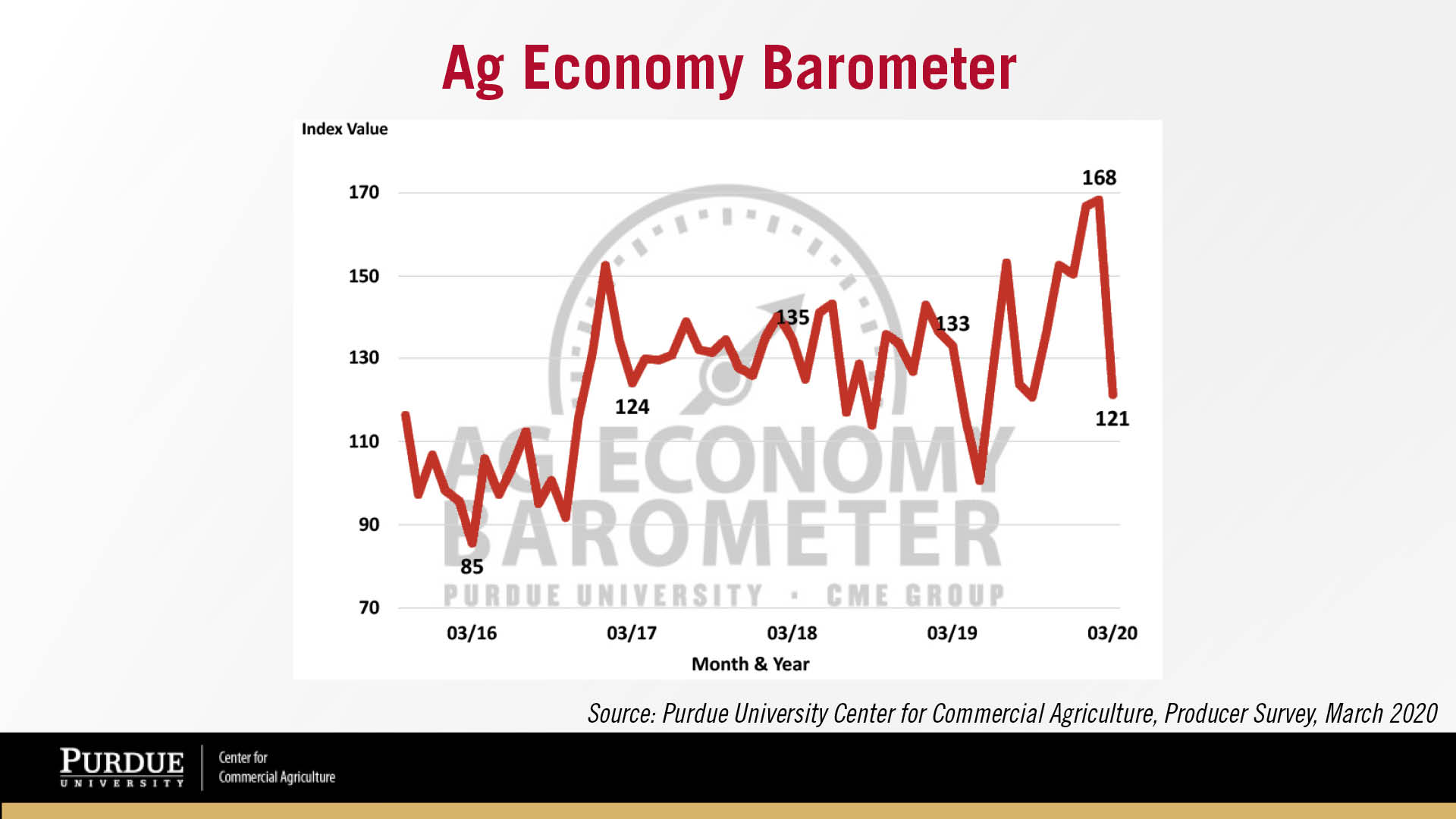 Declines in agricultural commodity prices and concerns about the coronavirus crisis impact on the U.S. economy and agricultural sector weighed heavily on farmer sentiment in March. This month’s decline in the barometer erased the sentiment improvement that took place this past fall and winter and leaves the index unchanged from its September 2019 reading. 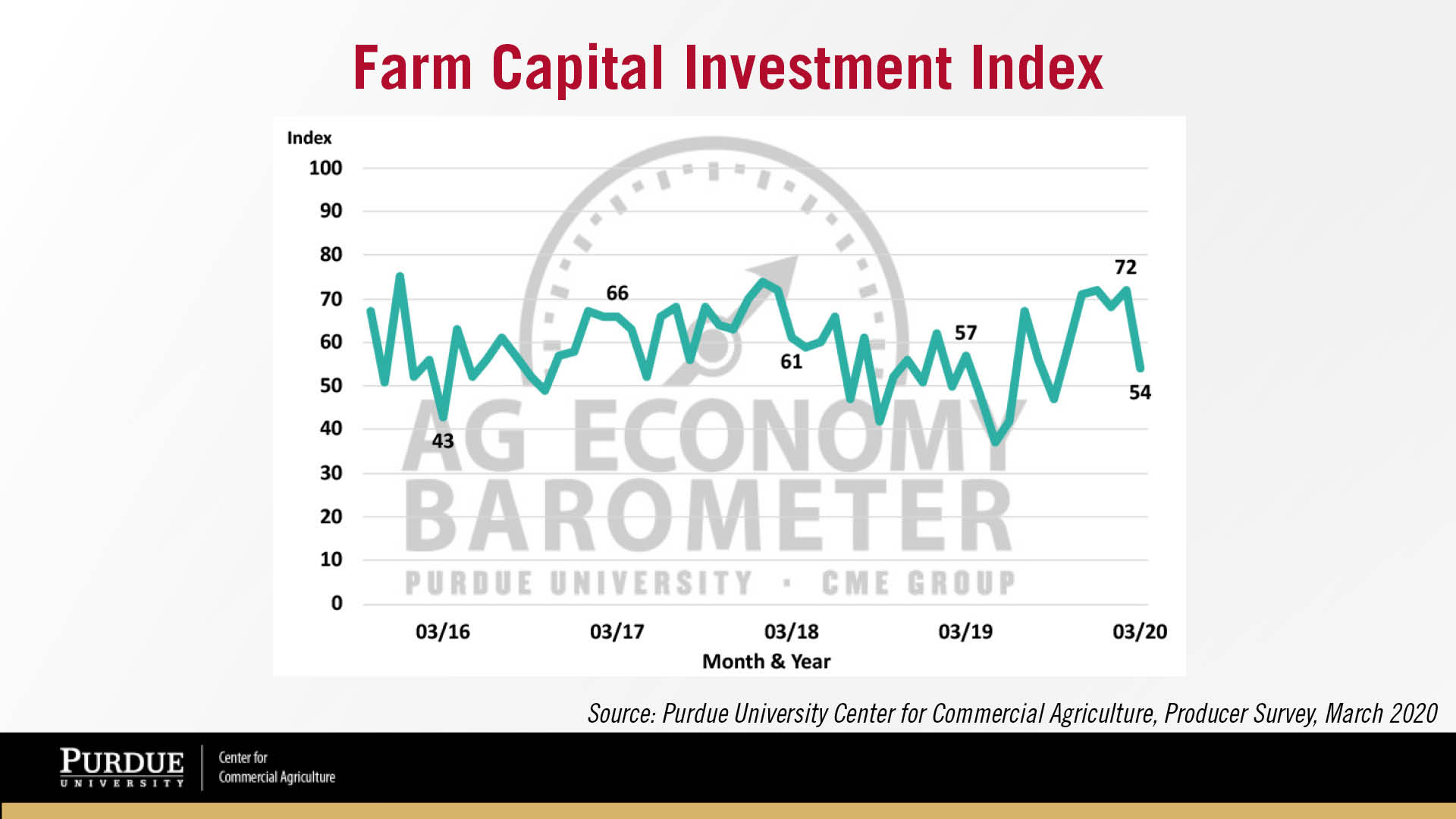 Farmers’ concerns about a deteriorating agricultural business climate were also evident in their responses regarding possible capital investments, which includes machinery, buildings and farmland. The Farm Capital Investment Index fell 18 points to an index value of 54, its lowest reading since last May, when many farmers were faced with wet weather and delayed planting.