The latest episode of On the Record is now available! In this week’s episode we take a look at how the number of “big” dealers has changed vs. a year ago. In the Technology Corner, Jack Zemlicka discusses increasing interest in optical sensor technologies. Also covered in this episode: increasing demand for equipment loans, Cervus Equipment’s new president and CEO, Angela Lekatsas, the reintroduction of the Concord brand of air seeding technology and first quarter ag equipment sales results.

Ag Equipment Intelligence has released its annual Big Dealer Report. For the purposes of this report, a “big dealer” is defined by a dealership group that operates five or more store locations in the U.S. and Canada. The 2018 edition of the Big Dealer report showed 188 dealerships operating five or more locations. In 2019, the number of big dealers dropped by one to 187 dealerships. 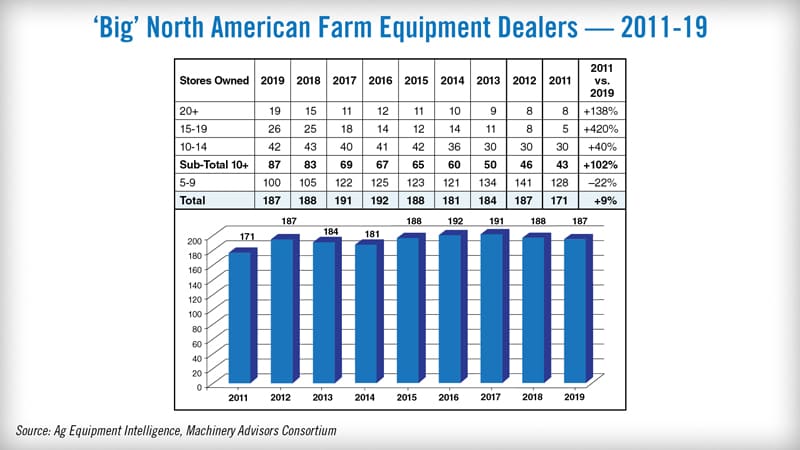 There are a few factors at play that caused the list to shrink a little this year. Most notable among the reasons for the changes are some big dealership groups combined with each other. At the other end of the spectrum, some smaller dealers closed or consolidated their stores, which removed them from the 2019 list as they no longer had five locations.

The most significant changes among the biggest dealers in the past year took place with those with 20-plus locations. Their number grew from 15 a year ago to 19 for 2019. But groups with 15-19 stores increased by only one compared to a year ago.

The full Big Dealer Report was sent to Ag Equipment Intelligence subscribers. It is also available for purchase on AgEquipmentIntelligence.com

This week’s Dealers on the Move include KanEquip, Miller Sellner and Terry County Tractor.

Terry County Tractor, a Brownfield, Texas-based Kubota dealer, added its second location on April 1 in Lubbock, Texas. The move is the culmination of 3 years of planning and searching for a second location.

One of the reasons behind growing interest in optical sensor technologies, or in sensor technology as a whole, is increasing input costs, which are creating tighter margins for farmers.

While there is still plenty of theoretical outcomes, farmers are most interested in practical impacts that sensing technology can provide, according to Dr. Ray Asebedo, agronomic consultant.  Only recently, he says sensing technology has begun to tie in agronomic payback to offer measurable ROI for farmers.

Ahead of his presentation at this summer’s National Strip-Tillage Conference, I caught up with Asebedo for a conversation on why farmers, dealers and manufacturers need to have a holistic plan with sensing technologies, rather than view them as independent tools.

“In the past, there was a lot of focus, just from a pure engineering perspective, without having too much discussion with agronomists and farmers in the field. So how can we expect any ag industry company to develop a sensor or product that is going to pay dividends to the farmer if they are not even addressing multiple problems on the farm. That’s one of the exciting things I’ve been seeing with these new sensor technologies and connected technologies throughout the cloud platform now is developed at their core is agronomic problem they are looking to solve.”

Asebedo adds that response time can be problematic when identifying and treating stressed crops, but ongoing advancement of sensing technology is allowing for in-crop detection and management of problems, in near real-time.

Ag economists at the Kansas City Fed report that non-real estate lending continued to increase at a moderate pace in the first quarter. The volume of non-real estate loans increased 9% from a year ago . 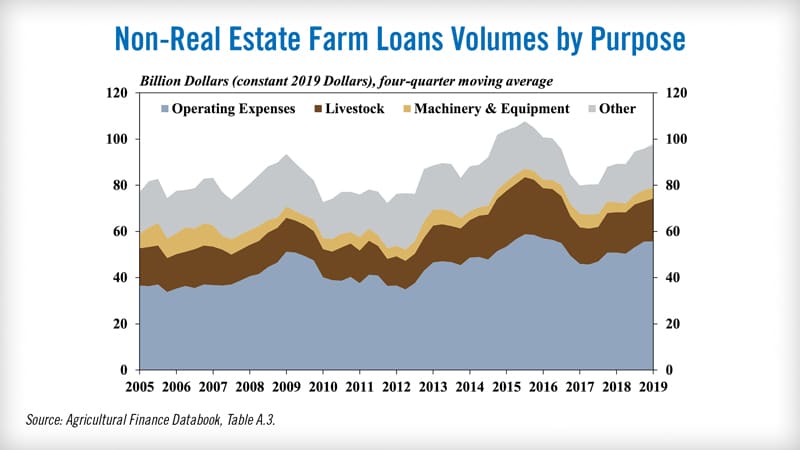 Although the volume of loans to finance operating expenses remained relatively steady, volumes for livestock loans and loans to finance machinery and equipment increased in the first quarter. The increase in livestock lending likely was due, in part, to slightly higher prices for livestock. In addition, volumes for other loans increased notably due to an uptick in both the size and number of loans. 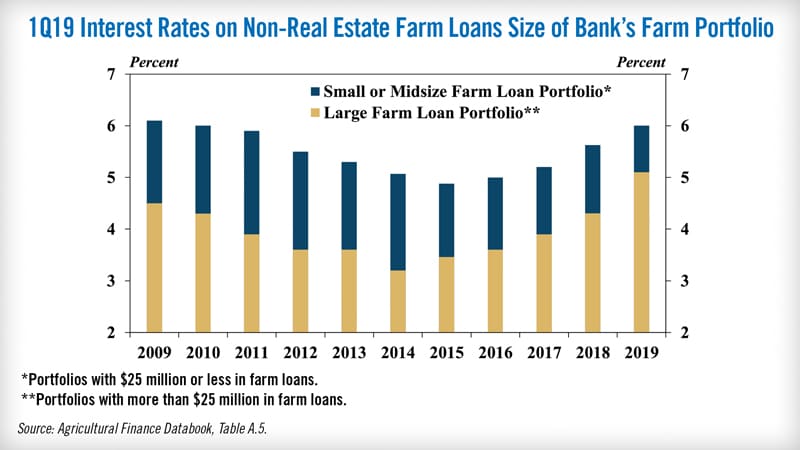 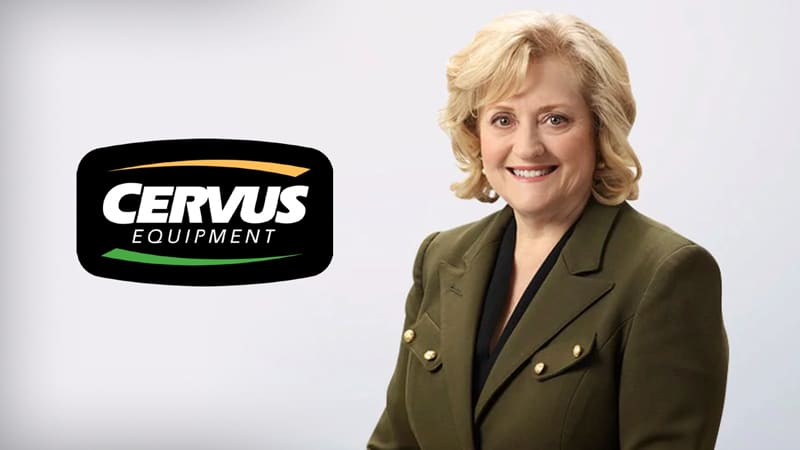 Cervus Equipment has named Angela Lekatsas its new president and CEO effective May 15. She is replacing Graham Drake, who is a co-founder of Cervus, which is one of only three farm equipment dealership groups in the U.S. and Canada that is publicly held. Drake has been with the John Deere dealer for 19 years and served as its president and CEO since 2012.

Lekatsas has served on Cervus Equipment’s Board of Directors since 2013. She has been involved in the agricultural industry at the executive level for much her career, including 15 years with Nutrien, and its predecessor Agrium. Most recently she was vice president, Merger Integration responsible for capturing $500 million in synergies from the merger of Agrium and Potash Corp. of Saskatchewan.

She told Ag Equipment Intelligence, the biggest challenges as the new Cervus CEO is that, while Canadian agriculture is well positioned to make capital investments because of several years of healthy farm profitability, she identifies three drivers that could soften short term demand for new ag equipment. 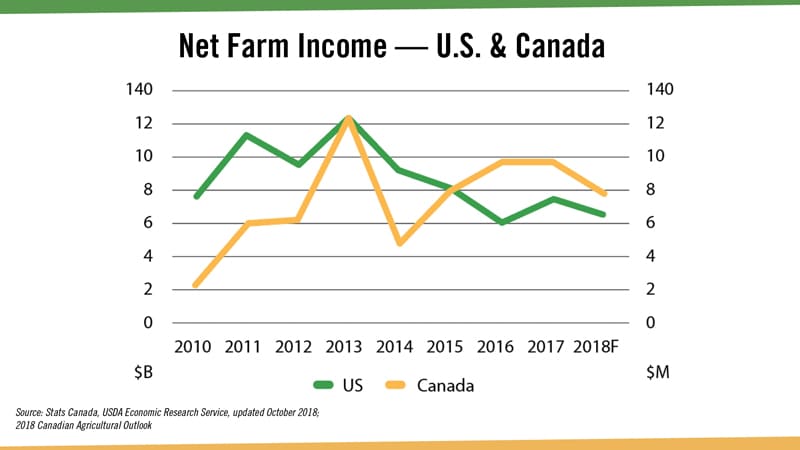 The first is flat net cash farm income in 2019. Lekatsas also expects pricing pressure on new equipment from a weaker Canadian dollar and rising manufacturing costs that could translate into profit pressure for both dealer and farmer.

She also sees the uncertainty created by geopolitical tensions resulting in tariffs and other trade barriers. This can make farmers nervous about big equipment decisions she says, and includes the Chinese/Canola situation in this bucket. 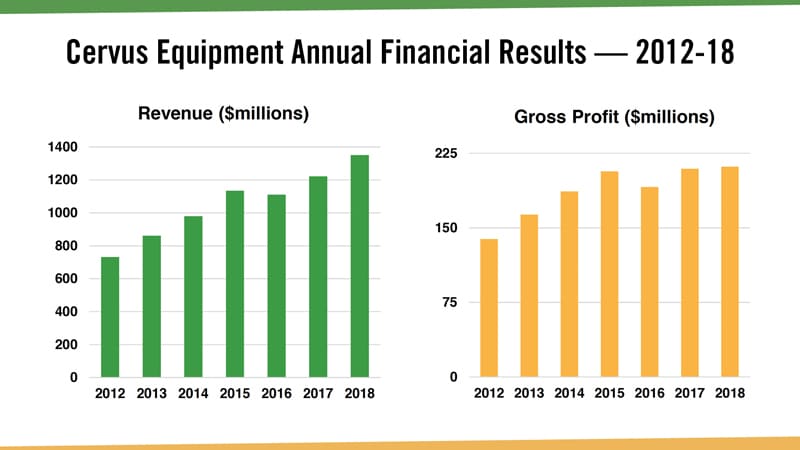 The Amity brand of seeding tools is reintroducing the Concord brand, a name associated with the original development of air seeding technology. 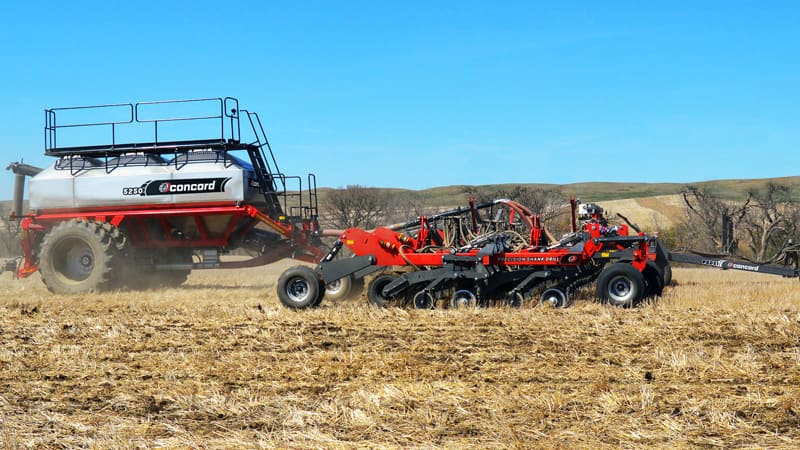 With this change, effective for model year 2020, all air drills and air carts that are manufactured by AGCO-Amity JV LLC in Wahpeton, N.D., and previously would have been branded as Amity, will now be given the Concord name.

Concord Inc. was founded in 1977 by Howard and Brian Dahl, who led the introduction of air seeding equipment into the North American marketplace, as well as internationally. Its products were instrumental in helping producers seed and fertilize small grains and oilseed crops on increasingly large acreage vs. traditional box drills.

Concord was the first to manufacture an air drill with row-by-row packing and precision depth control, the first to put down fertilizer below the seed at the same time as planting, and the first to build a machine that could change seeding and fertilizing rates on the go.

In 1996 Concord was sold to Case Corporation, but the remaining assets and staff were used to launch Amity Technology. Since then, Amity Technology acquired Fargo Products, an air seeder and cart manufacturer, in 2007 and entered into a joint venture with AGCO in 2011. 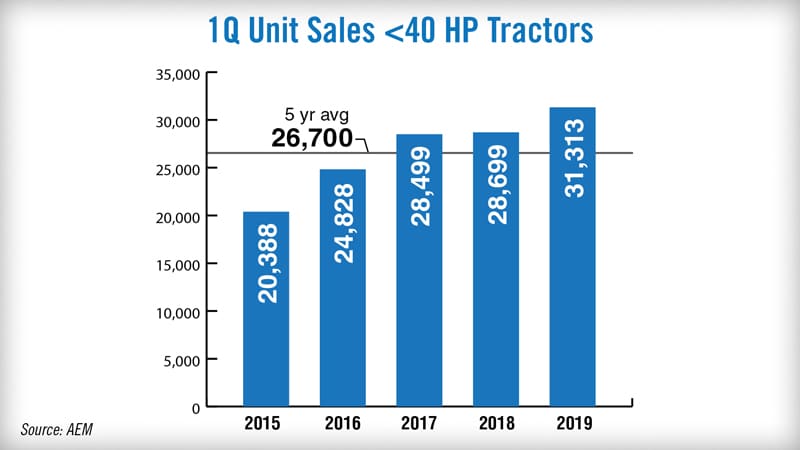 Unit sales of under 40 horsepower tractors in the first quarter of this year were up year-over-year less than 1%. But compared to the average first quarter sales between 2015-19, sales through the first 3 months of the year are up 17%. 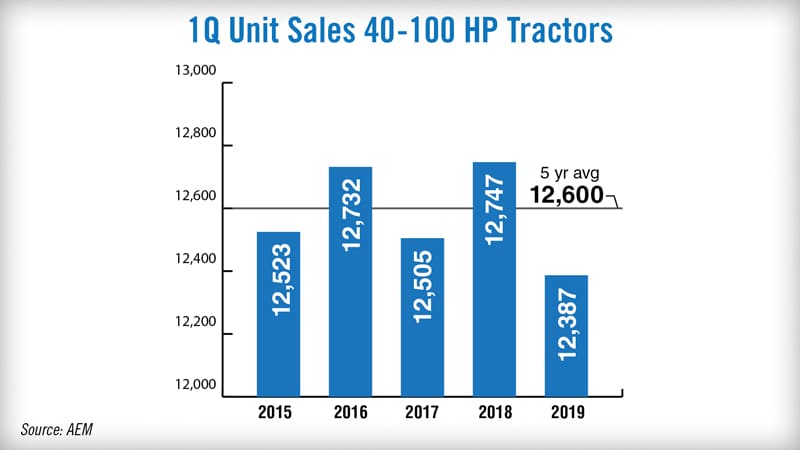 For utility tractors, unit sales were down 2.8% on a year-over-year basis. First quarter sales in 2019 vs. average first quarter sales over the past 5 years, for 40-100 horsepower equipment is down about 1.5%. 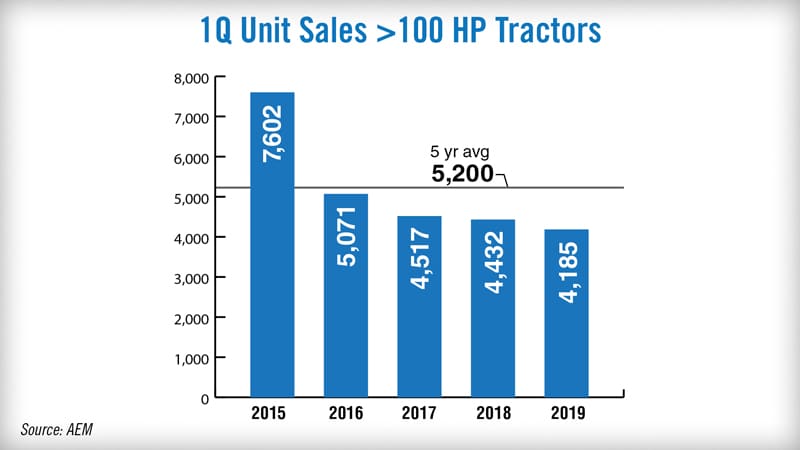 Year-over-year March 2019 row-crop tractor sales were down 2.2%. Through the first quarter of this year, sales of tractors over 100 horsepower are down 19% compared to average first quarter sales during the past 5 years. 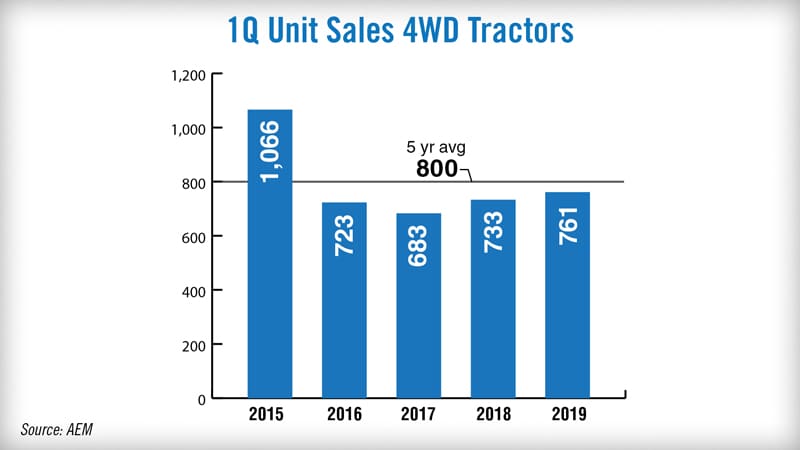 Unit sales of 4WD tractors were up 1.3% in March vs. March 2018. The sales of this tractor category during the first 3 months of 2019 were down by 4% compared to average sales during the first quarter over the past 5 years. 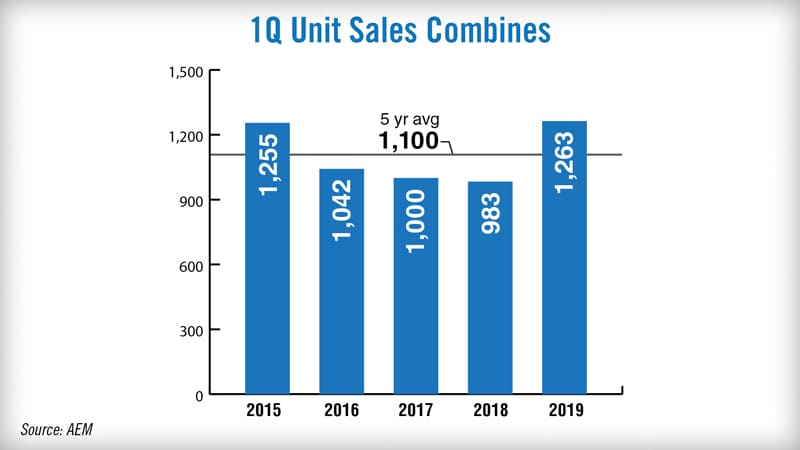 North America combine sales in March were up more than 41% year-over-year. During the first quarter of this year, sales of combines are up 14% vs. the 5 year average first quarter sales from 2015-19. 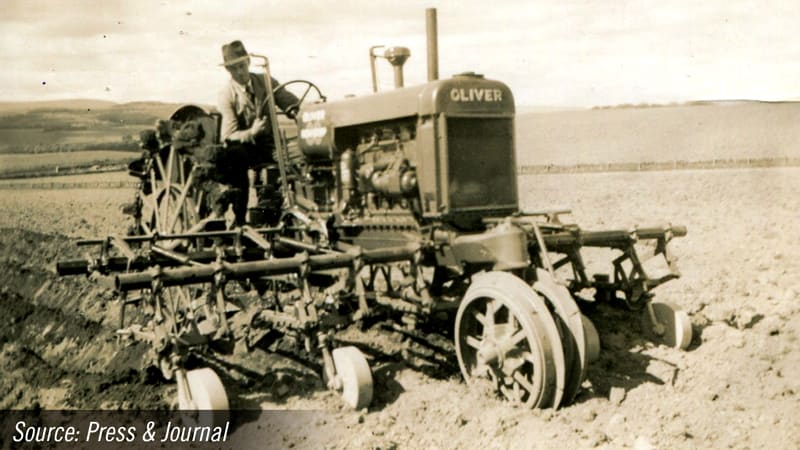 In the early 20th Century, farm equipment manufacturers were eager to become full line manufacturers. Originally known for its plows, Oliver began to design its owns tractor. But, this was costly so the company began to explore working with an existing tractor line. Oliver Chilled Plow Co., tractor manufacturer Hart Parr Co., and harvesting equipment manufacture Nichols and Shepherd merged together in 1929 to form a new, full line company. But a name wasn’t settled on. Because Oliver Chilled Plow Co. was bigger than the other two companies combined, JD Oliver, son of the founder, insisted the Oliver name be used and the Oliver Farm Equipment Co. was born. Two weeks later, the new company purchased the American Seeding Co. and a year later purchased the McKenzie line of potato machinery.