According to a report from the Farm Bureau, while well below historical highs, Chapter 12 family farm bankruptcies in 2019 increased by nearly 20% from the previous year, according to recently released data from the U.S. Courts. Compared with figures from over the last decade, the 20% increase trails only 2010, the year following the Great Recession, when Chapter 12 bankruptcies rose 33%.

During the fourth quarter of 2019, there were 147 Chapter 12 bankruptcy filings, which was up 14% from the prior year but down 8% from the third quarter of 2019. On a year-over-year basis, Chapter 12 filings have increased for 5 consecutive quarters. The continued increase in Chapter 12 filings was not unanticipated given the multi-year downturn in the farm economy, record farm debt, headwinds on the trade front and recent changes to the bankruptcy rules in 2019’s Family Farmer Relief Act, which raised the debt ceiling to $10 million.

During the 2019 calendar year, Chapter 12 farm bankruptcies were the highest in Wisconsin at 57 filings. Wisconsin farm bankruptcies were up 8 filings from the prior year and were also at the highest level in a decade. Following Wisconsin, Georgia had 41 Chapter 12 filings in 2019, which was up 15 filings from 2018. Chapter 12 filings were at, tied with or above decade-high levels in 10 states: Iowa, Illinois, Kansas, Minnesota, Nebraska, New Hampshire, Ohio, South Carolina, South Dakota and Wisconsin. 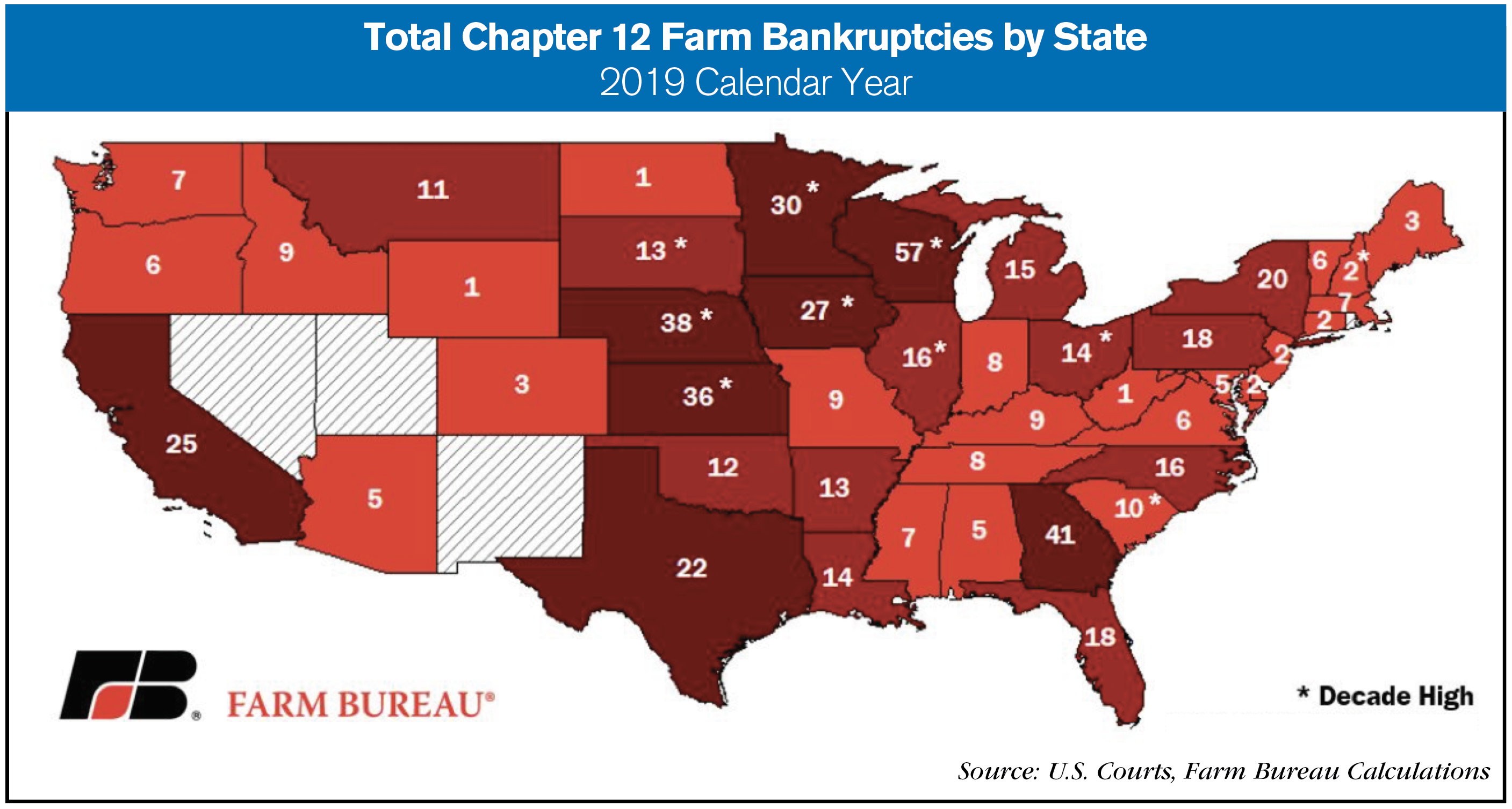 Chapter 12 farm bankruptcies rose in many states across the Midwest, West and Southeast. Georgia had the largest increase: 14 more filings than the prior year. Following Georgia were Iowa and Florida with 14 additional Chapter 12 bankruptcy filings and Nebraska with 11 additional filings. 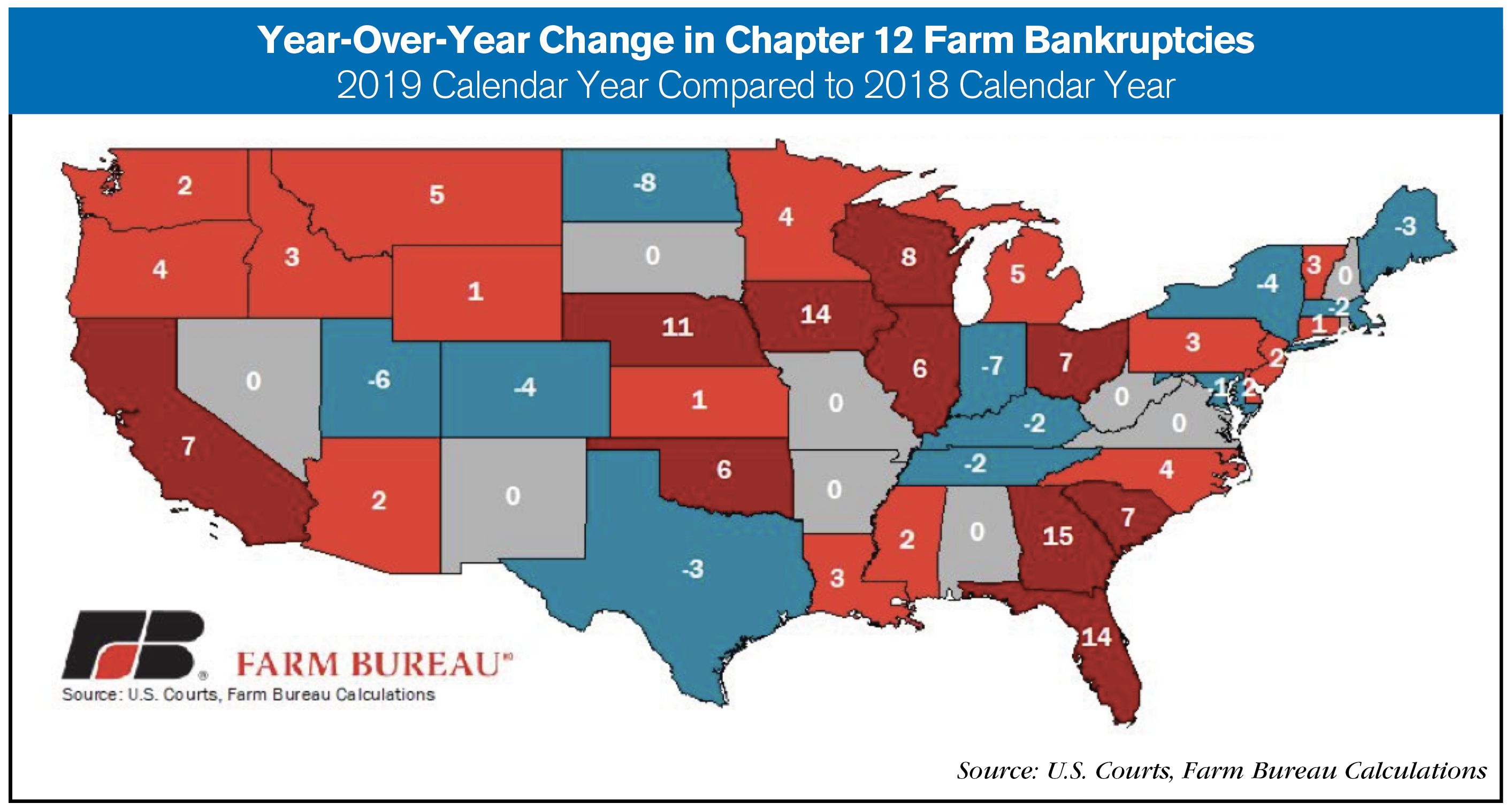 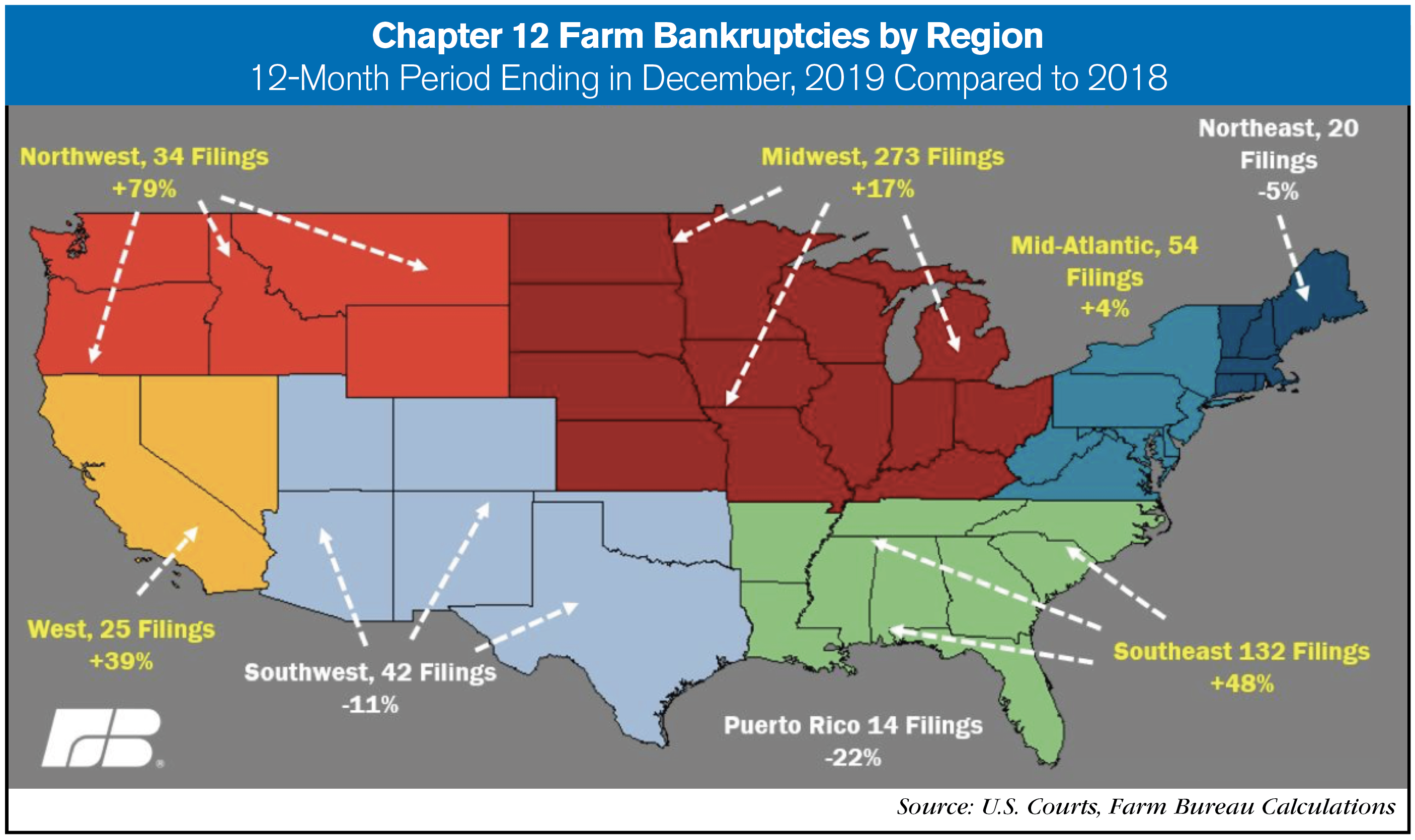 Bankruptcies Over the Last Decade

Over the last decade, there have been more than 5,000 Chapter 12 farm bankruptcies across the U.S., representing approximately a quarter of 1% of all farm operations during this time period. At 388 filings, Chapter 12 filings over the last decade were the highest in California, followed by Wisconsin at 375 filings and Georgia at 351 filings. 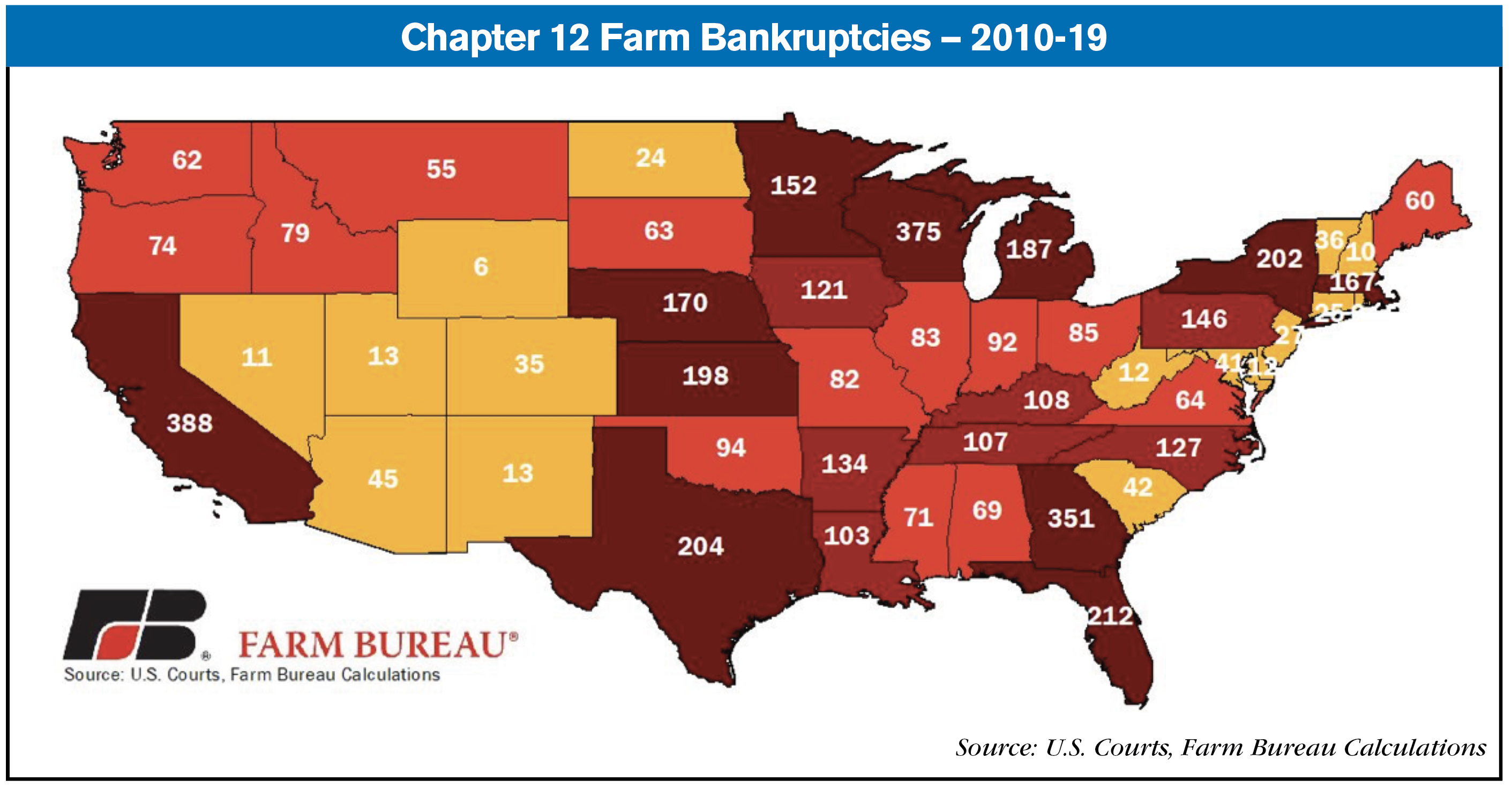 Depending on perspective, net farm income in 2019 inflation-adjusted dollars is either down 33% from a record high or up nearly 40% from the decade low set in 2016. Regardless of perspective, net farm income in 2019 is slightly above the 20-year average but was supported in large part by the Trump administration’s efforts to financially shield farmers from unfair retaliatory tariffs.

Without this support, farm-related income from crop and livestock sales in 2019 inflation-adjusted dollars would have been at the second-lowest level in the last decade at $63.6 billion. The corollary to this is that farm bankruptcies could have been worse considering the record-high farm debt of $415 billion (in nominal terms) and the likely difficulties servicing this debt without the revenue from the Market Facilitation Program.

The Trump administration is not expected to announce a third round of trade assistance given the welcome trade news with respect to Japan, USMCA and a China Phase 1 deal. As a result, farm financial conditions in 2020 will come down to a race between the additional grain and oilseed supplies likely to come online following a record prevented planting year and any demand boosts for U.S. agriculture that results from these new and enhanced trading opportunities.