USDA currently projects farm income in 2019 to reach $88 billion – the highest net farm income since 2014’s $92 billion but still 29% below 2013’s record high. In addition, nearly 40% of that income — some $33 billion in total — is related to trade assistance, disaster assistance, the farm bill and insurance indemnities and has yet to be fully received by farmers and ranchers.

Total bankruptcies filed by state vary significantly, from no bankruptcies in some states to more than 20 filings in others. Bankruptcy filings were the highest in Wisconsin at 48 filings, followed by 37 filings in Georgia, Nebraska and Kansas. Iowa, Kansas, Maryland, Minnesota, Nebraska, New Hampshire, South Dakota, Wisconsin and West Virginia all experienced Chapter 12 bankruptcy filings at or above 10 year highs. 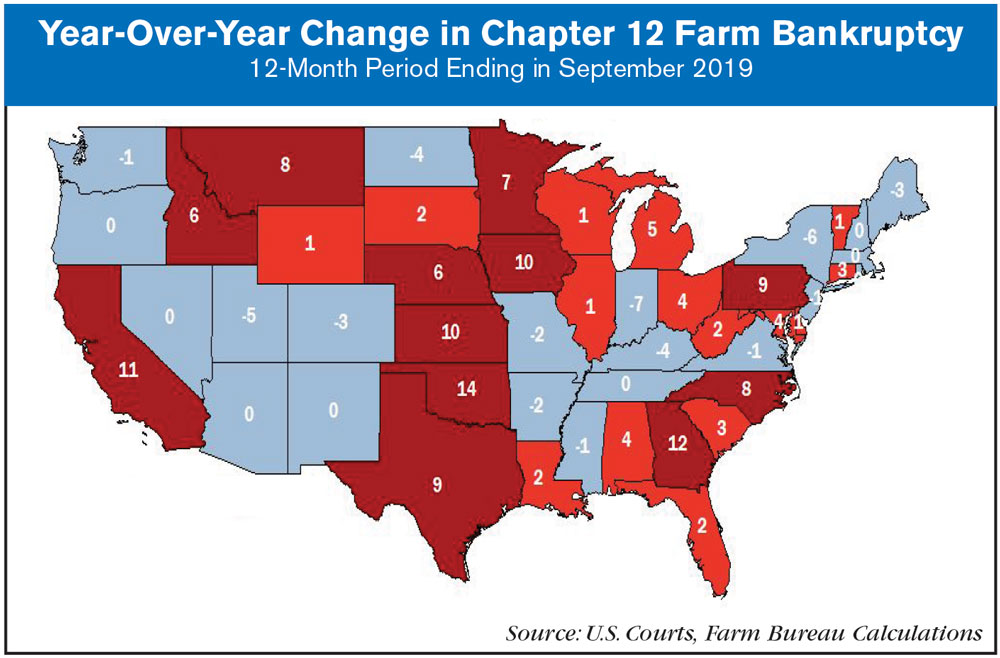 The increase in farm bankruptcies was the highest in Oklahoma at 14, followed by Georgia at 12, California at 11 and Iowa and Kansas at 10 each. Oklahoma had the sharpest increase in bankruptcy filings, increasing from two filings last year to 17 during the previous 12 months.

All regions of the U.S. saw higher bankruptcy rates over the previous 12 months compared to the prior year. More than 40% of the farm bankruptcies, 255, were in the 13-state Midwest region. Bankruptcies in the Midwest were up 13% compared to prior-year levels and were at the highest level in more than a decade. Following the Midwest, the Southeast had 118 Chapter 12 bankruptcies over the past year, representing an increase of 31% compared to year-ago levels. 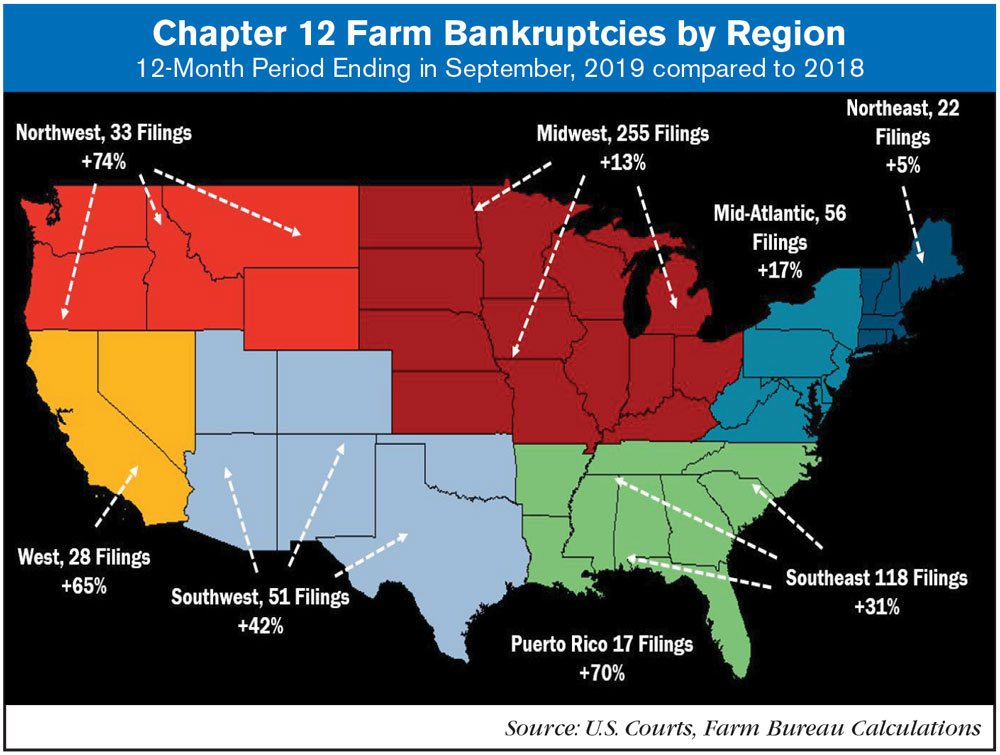 Chapter 12 farm bankruptcies continue to increase as farmers and ranchers struggle with a prolonged downturn in the farm economy that’s been made worse by unfair retaliatory tariffs on U.S. agriculture as well as two consecutive years of adverse planting, growing and harvesting conditions. Over the prior 12 months, Chapter 12 bankruptcies totaled 580 filings and were up 24% from the previous 12 months.

While filings remain well below the historical highs experienced in the 1980s, the trend is a concern. The support provided to farmers in 2018 and 2019 is expected to alleviate some of the financial stress, however, not all farmers will benefit from trade assistance, farm bill programs, crop insurance or disaster aid. As a result, it could take some time for the financial relief to manifest in the farm bankruptcy trends. Chapter 12 bankruptcies in the third quarter of 2019 were down only slightly, 2%, from the previous quarter.