In this week’s episode, we discuss improvements in dealer sentiment at the end of 2019 as well as producers likelihood to purchase farm equipment. From the Precision Farming Dealer Summit in St. Louis this week, Technology Editor Jack Zemlicka reports on how dealers can serve as consultants to their customers, particularly when it comes to technology. Also in this episode: Buhler Industries' revenues drop 25.7%, the Dallas Fed reports 4Q ag loan demand declines and farmland values are likely to hold steady in 2020.

As 2019 closed out, Ag Equipment Intelligence’s latest Dealer Sentiments report showed an significant improvement in dealer sentiment. The Dealer Optimism Index, which measures sentiment among dealers compared to the prior month, saw double-digit improvement in November, and the highest reading in a year. 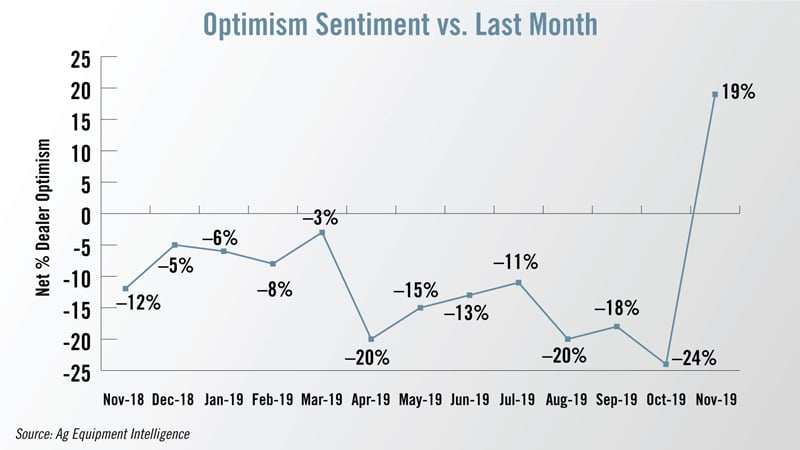 One dealer from the Appalachia/Northeast region commented that “recent developments in the trade war may create some optimism in the market.” Another dealer from the same region said, “The futures on dairy are looking significantly better vs. 3 years ago. The concern will be getting enough equipment to meet demand.”

While dealers were more positive in the month, there is still concern going forward. One dealer from the Lake States/Northern Plains regions summed up the concerns saying, “The ag market is very unstable. Yields are down and prices are soft. Dairy farmers are trying to catch up. Beef is stable but not very profitable. We are seeing consolidation retirement or exiting farmers. Bankruptcies are at an all-time high.”

In its December Ag Economy Barometer update, Purdue University and CME Group’s Farm Capital Investment Index rose slightly to 72 points in December, marking its highest reading of 2019. The investment index measures growers’ optimism toward making larger investments in their operations, including farm equipment, which could be a positive sign for manufacturers and equipment dealers heading into 2020. 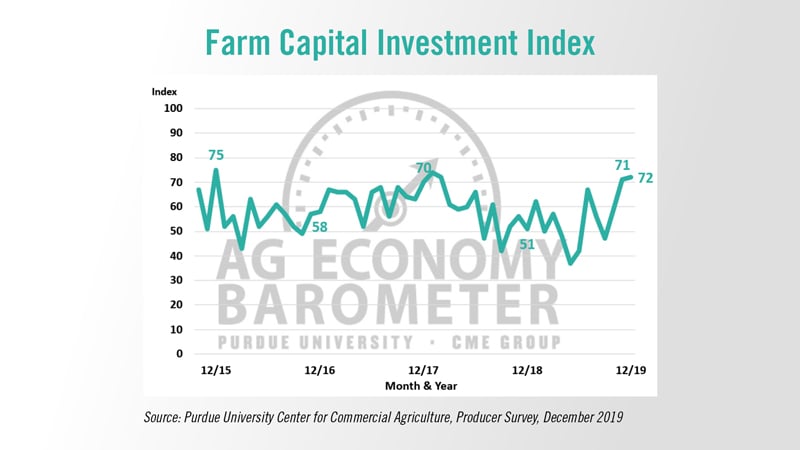 After a noticeably volatile year for investment sentiment (including a year low of 37 points in May), farmers finished the year strong, up 34 points or by nearly 100% since May. When compared year-over-year, farmer investment sentiment has risen 21 points or by 41%. December’s reading was also the second highest reading recorded after October 2015, with the highest reading being 75 in December 2015.

This week’s Dealer on the Move is Platte Valley Equipment. The 4 store John Deere dealership in Nebraska broke ground on a new flagship facility in Fremont, Neb. The new facility will replace the existing Fremont store and will be 55,000 square feet in all, including 30,000 square feet for the service shop and a dedicated training facility.

Dealers Should be Consultants on Technology

Jack Zemlicka is out on assignment this week at the Precision Farming Dealer Summit and National No-Tillage Conference in St. Louis, but he sent us this report.

Managing a dealership hasn’t gotten any easier in recent years, and leadership within large and small-store operations are still scratching their heads over where to take their precision business in the future. But there are those who have taken an active approach in recruiting tech talent, holding employees accountable and creating a culture of collaborative expectations.

At this week’s Precision Farming Dealer Summit in St. Louis, Tom Rosztoczy (Rose-Tosy), president and CEO of Stotz Equipment, explained why dealerships need to embrace the philosophy of being consultants to their customers, especially when it comes to ag technology.

Rosztoczy was part of an executive panel at the Summit that spoke on the importance of being proactive leaders and leveraging relationships as a gateway to expansion of precision services and revenue.

“As far as things we see coming down the pike, it’s going to be that challenge as an equipment dealer to be the consultant to our customers. To be the folks who do the data analytics than then sit down with a customer and explain what the data means. That’s going to be a challenge for us when it comes to people because we’re going to have to have people who can spend time on the computer, doing spreadsheets, data analytics, etc. So we’ll have data analytical talent, as well as the ability to sit down with a customer at his kitchen table and put into simple language the summary of what he’s learned from the data analytics.”

Rosztoczy adds that a key to building precision business is an understanding that the best interaction a customer can have to realize the value of collected data is with a person and not with a screen.

Buhler Industries, the manufacturer of the Versatile and Farm King line of agriculture equipment, reported its year-end earnings on Dec. 30, 2019. 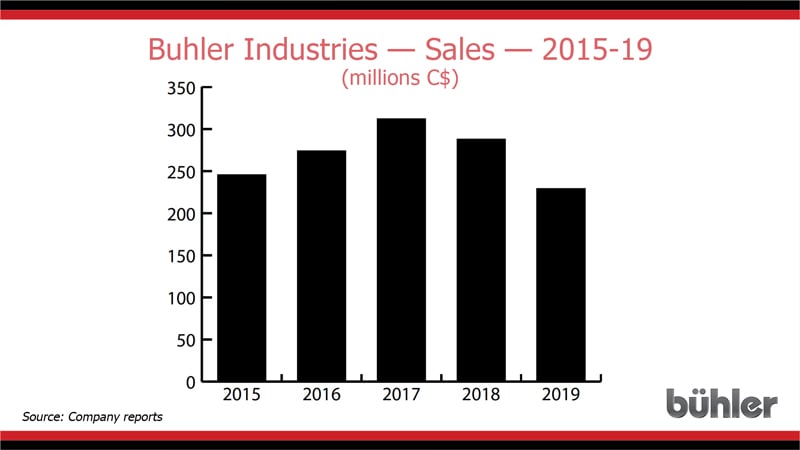 Revenue for the year was $229.1 million, down $58.9 million or 25.7% from sales of $288 million in 2018. The company’s lower sales levels are as a result of trade uncertainties, poor harvest conditions and crop yields coupled with low commodity prices. Sales to North America and Eastern Europe are below historical levels, while other markets have remained steady. 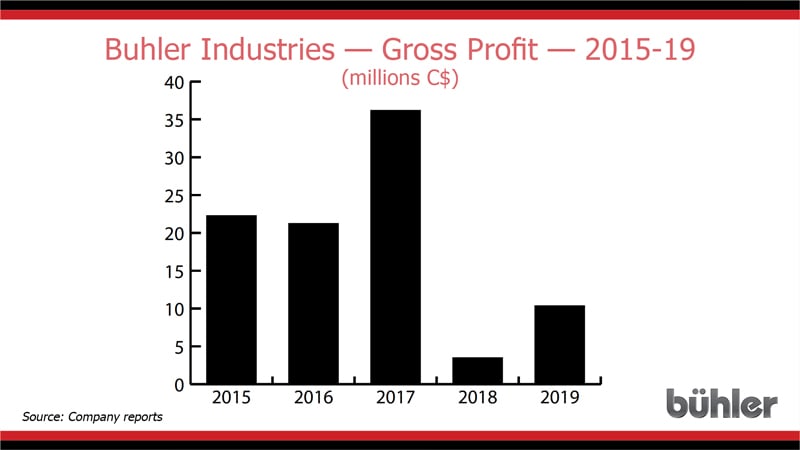 However, gross profit rose to $10.3 million, an increase of $6.8 million from 2018, as a result of Buhler’s efforts on margin improvements during the year. 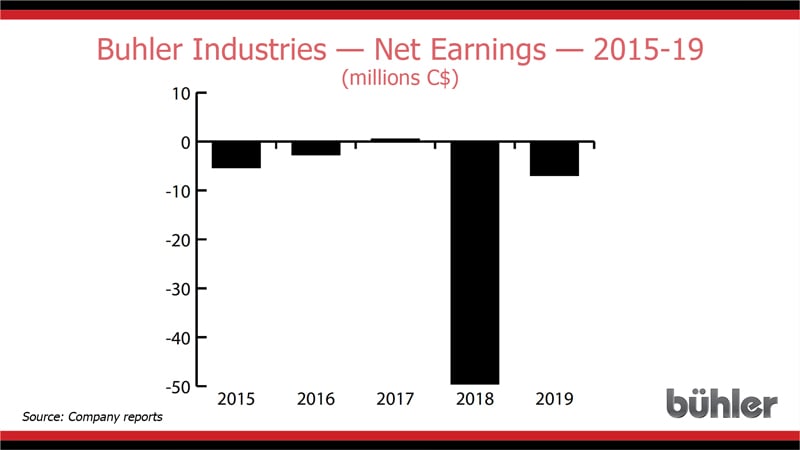 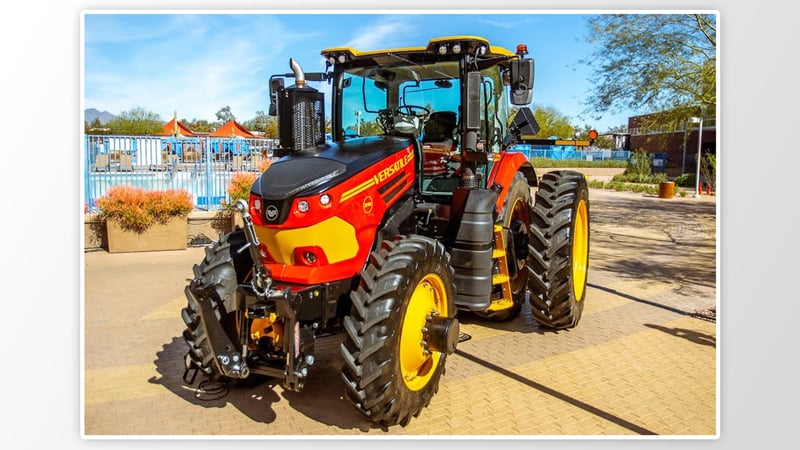 Despite the decline in revenues, 2019 saw the introduction of the Nemesis mid-range tractor, along with an OEM agreement to manufacture the tractor for Kubota as well. In addition, Versatile added 14 new dealers in 2019. 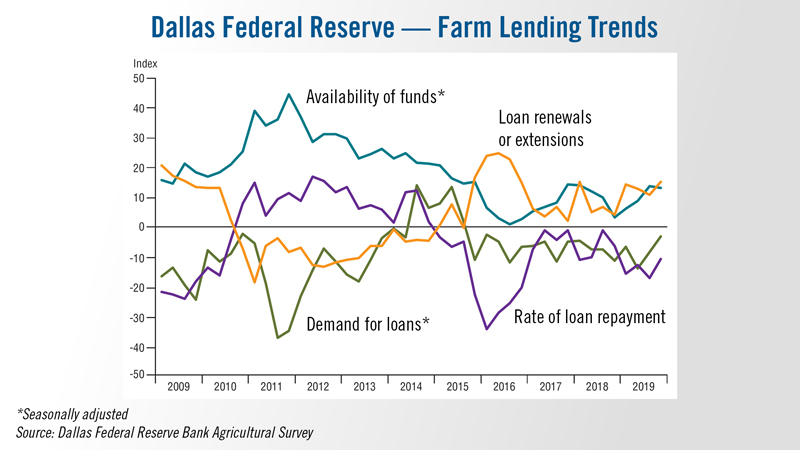 Demand for agricultural loans continued to decline during the final quarter of 2019, with the loan demand index register­ing its 17th quarter in negative territory. According to the survey results, loan renewals and extensions increased, and the rate of loan repayment continued to decline. Loan volume fell across all major categories compared with a year ago. 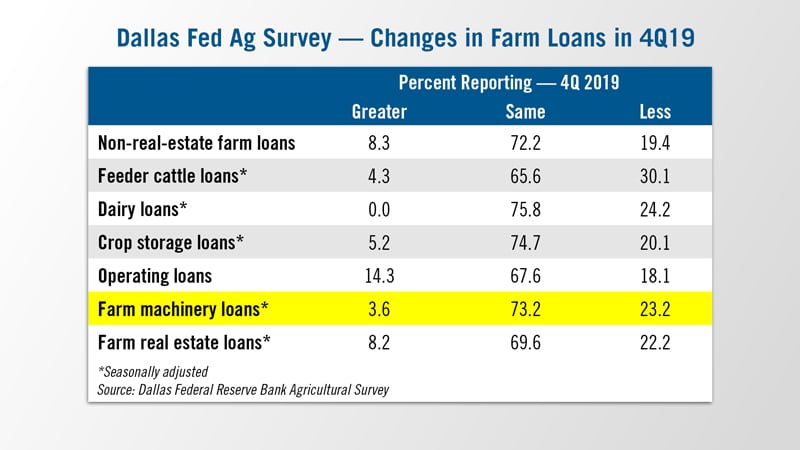 Some 23% of bankers reported their volume of farm machinery loans was down in the fourth quarter vs. the same period a year ago. Less than 4% of ag lenders indicated their loans for ag equipment were up during the quarter. 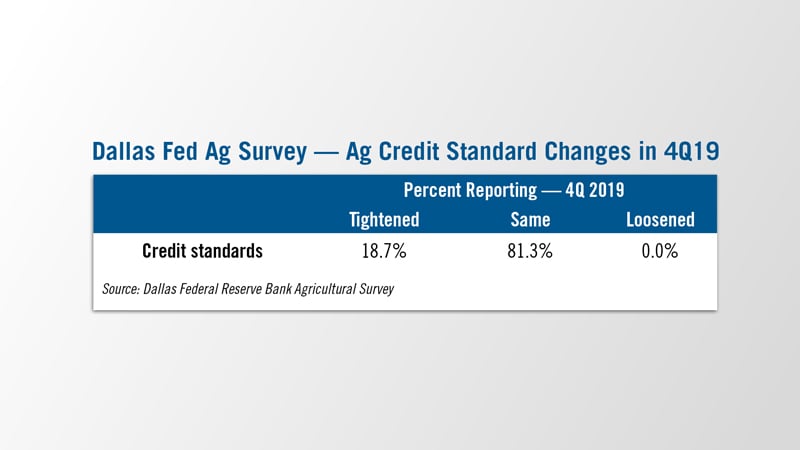 Nearly 19% of the bankers also reported that they had tightened their credit standards for farm loans at their banks in the fourth quarter, while none said they loosened their standards during the latest reporting period.

Despite the ongoing sluggishness in agriculture, the value of good cropland held mostly steady in 2019, and, according to agricultural landowner services company Farmers National Co., more of the same is expected in 2020.

While 2019 sales of farmland started off slowly, the company said it saw a 25% increase in acres sold vs. the previous year. This was the highest sales volume since 2014. 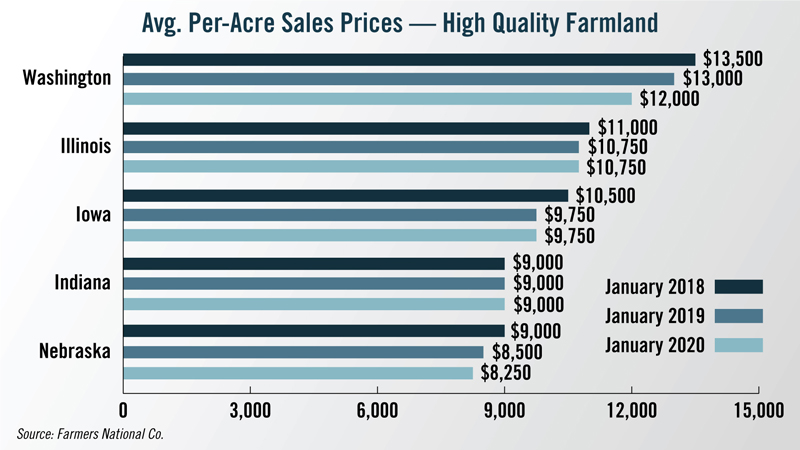 Land values in 2019 continued to buck the prevailing doldrums in agriculture to hold steady or even increase slightly in some instances except for the most stressed areas or segments such as dairy. The company said that historically low interest rates along with government support for farmers played a significant role in helping to maintain farmland values in the past year.

These are expected to continue influencing the ag real estate market in the year ahead, said Randy Dickhut, senior vice president of real estate operations for Farmers National. “Overall, agriculture is in adequate financial shape, but there are individual and regional concerns,” he says.

“You take an area like Wisconsin with a high concentration of owner operated smaller dairies that have been under a lot of financial stress, and they're also aging out, not only the producer themselves, but their facilities. [We’re also seeing this] happening in upstate New York.”

And now from the Implement & Tractor Archive 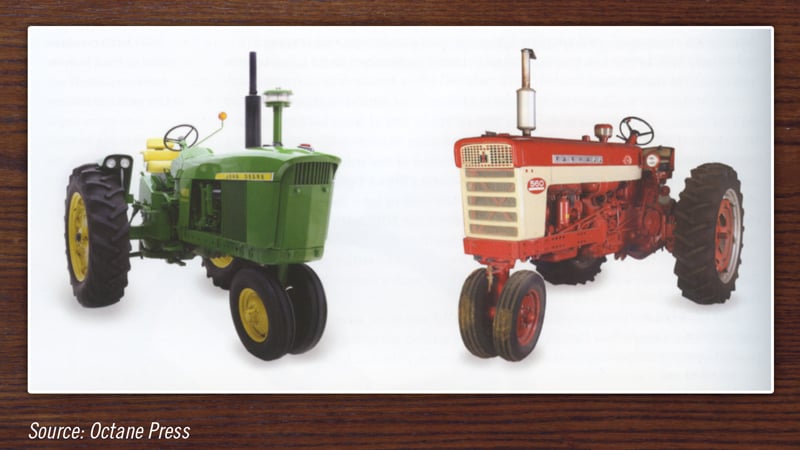 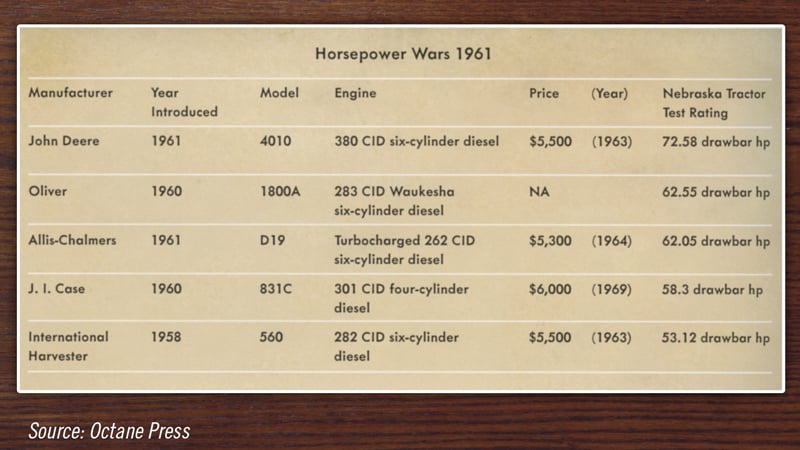 John Deere’s introduction of the 4010 began what the book Tractors refers to as the Horsepower Wars of 1961. The Deere 4010 featured cutting-edge looks and state-of-the-art ease of operation. On top of that though, it offered 10 more horsepower than any of the competitive row-crop machines on the market. The 4010 had 37% more power than the International Harvester’s 560. The competition responded and between 1963 and 1965 all the major tractor manufacturers substantially revised their models to compete with Deere. In 1963, Deere rolled out the revised 4020 with 83 horsepower at the drawbar and once again took over the number one spot.

As always we welcome your feedback. Send comments and story suggestions to kschmidt@lessitermedia.com. Until next time, thanks for joining us.