China said it will waive import tariffs for some soybean and pork shipments from the U.S., according to The Pig Site. The tariff waivers were based on applications by individual firms for U.S. soybeans and pork imports, the finance ministry said in a statement, citing a decision by the country's cabinet.

The waiver concerns tariffs of 25% on both U.S. soybeans and pork put in place in July 2018 and a further 10% on pork and 5% on soybeans in September of this year. The waiver comes amid negotiations between the U.S. and China to conclude a “phase one” or interim deal to de-escalate a 17 month trade war.

Since late 2018, the U.S. has similarly exempted some Chinese goods from U.S. tariffs, even as the tone of the trade talks waxed and waned.

At the end of October, the Office of the U.S. Trade Representative (USTR) began accepting tariff exclusion requests for Chinese goods subject to additional taxes in effect since Sept. 1. Prior to that, 14 batches of exclusions for Chinese products had been granted between December 2018 and mid-October of this year.

Exemptions for pork are likely to be in higher demand, with less than two months until China's Lunar New Year holiday, the country's peak consumption period. U.S. pork exports to China and Hong Kong are already up 47% in volume terms from January to September, even with high duties in place.

A second adviser to the Chinese government said exemptions on the products suited Beijing, as they helped meet market demand for such goods while reducing the trade surplus with the U.S. "We might as well buy soybeans from the U.S. rather than from Brazil. Brazil is actually selling us what was purchased from the United States and they even hiked the prices up before selling to us,” she said.

History of the Trade War

This isn’t the first time that China has made an attempt to ease the tension in the tariff relations between itself and the U.S, according to Time. Back in September, both the U.S. and China agreed to postpone tariff hikes, with China specifically holding off on increasing pork tariffs.

As reported earlier by Ag Equipment Intelligence, the tariff war between China and the U.S. has had notable impact on the state of ag. Negotiations have gone back and forth for several months, including a tariff ceasefire declared at the G20 summit in Japan in July of this year.

Still, U.S. farmers have remained mostly optimistic throughout a year of back and forth trade sentiment between the two countries, with about three-fourths of surveyed farmers between March and October of this year consistently indicating that they believe the trade war will be resolved in a way that benefits the U.S., according to Purdue University's Ag Barometer monthly survey.

However, farmers are less confident that the trade war will be resolved soon, with the largest percentage indicating that they believe it will end soon being 57% this month. 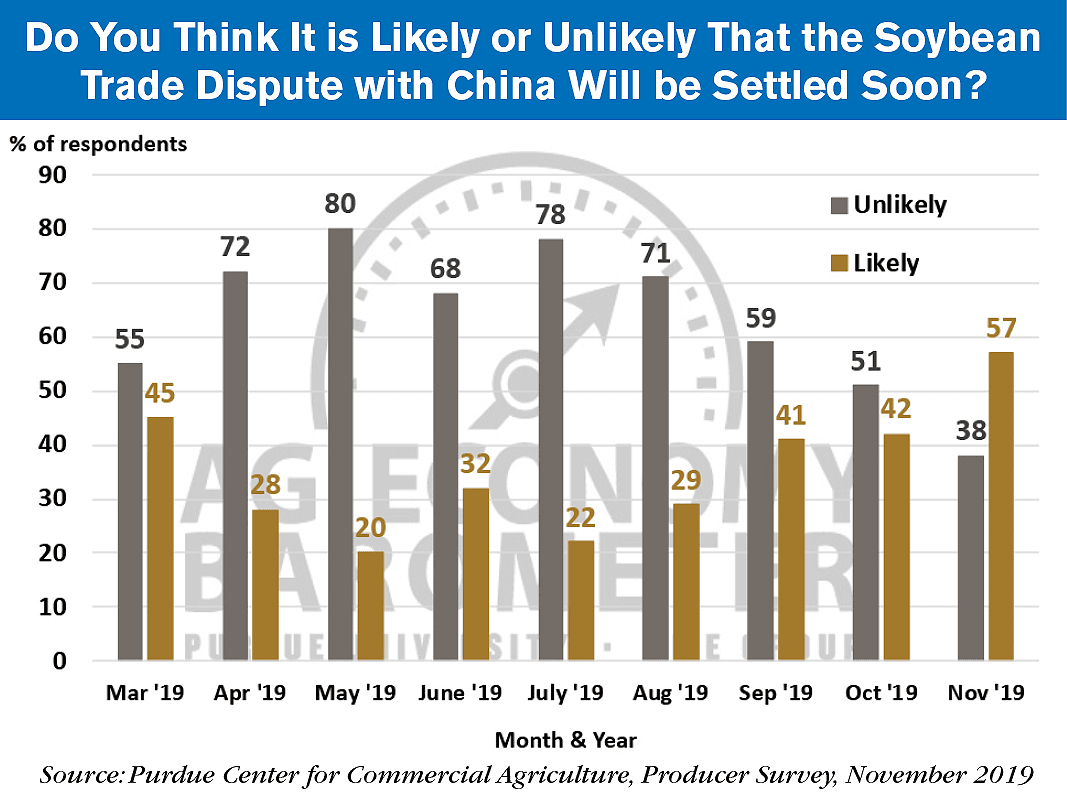