Calgary-based Cervus Equipment, one of John Deere’s largest ag equipment retailers with 36 store locations, reported that its consolidated revenue for the third quarter of 2019 ended Sept. 30 declined by 19% year-over-year. Total revenues for the quarter were down from nearly C$393 million in the third quarter to C$317 million in the same period of 2019. In addition to its ag equipment segment, Cervus also does business in trucking and industrial equipment.

Total equipment revenue for the period was $229 million, down by 26% from $310 million in the third quarter of 2018. This was partially offset by an 8% increase in product support revenue to $88.5 million from nearly $82.3 million a year earlier.

For the first 9 months of the year, Cervus’ total revenues were down 16%, from nearly $1.1 billion for the same period of 2018 to $879 million during the current 9 month period.

The Canadian dealership group said the majority of the drop off during the most recent reporting period was from new equipment in its agriculture segment. A decline in truck sales in its transportation segment relative to strong sales of 2018 was a secondary factor.

“In our Agriculture segment, equipment revenue declined 28% in the quarter and 24% year-to-date as the Western Canadian Agriculture industry continues to face headwinds, including reduced farm income in 2018 compounded by increased input costs, reduced commodity prices, trade disputes and poor weather conditions,” the company said. “In this environment, producers are choosing to postpone new equipment purchases as they hold late model equipment purchased in recent years.” 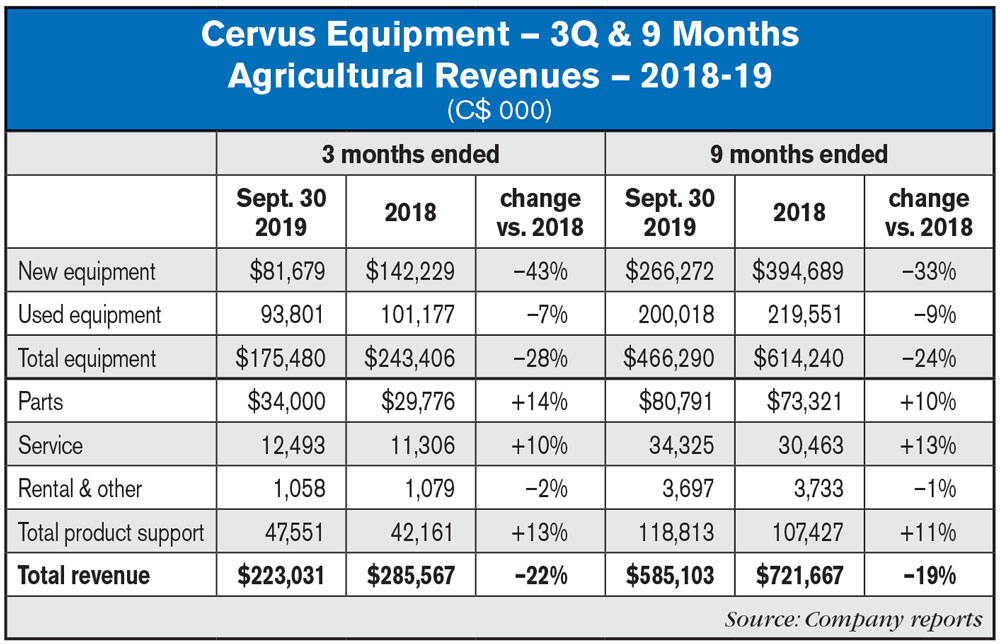 Cervus said it reduced its ag equipment inventory by $33 million, or 18%, compared to the second quarter of 2019. The dealership group said this is below inventory levels reported on Sept. 30, 2018 and Dec. 31, 2018. “Inventory write-downs associated with this aggressive reduction increased $6.5 million in the quarter and $4.9 million year-to-date compared to 2018.,” said Cervus management. “These actions have enabled progression toward an appropriate level of used inventory more in line with market demand, illustrated by our comparatively strong inventory turn ratios at 3.87 for new agriculture equipment and 1.65 for used agriculture equipment.”

Cervus’ management went on to say, “In our second quarter report, we announced our expectation that reduced new equipment revenue, margin and incentives would impact new equipment gross profit by $15-$20 million, across the third and fourth quarters of 2019. Consistent with our guidance, in the third quarter we realized $11 million of this estimated reduction and expect a remaining reduction of between $8-$12 million in the fourth quarter of 2019, compared to the same periods in 2018.

“By facing the difficult industry conditions and rebalancing our inventory this year, we anticipate a strong balance sheet with capacity for both new and used equipment sales and improved profit margins in future years at sustainable levels, while limiting prolonged exposure to inventory carrying costs and valuation risk,” they said.

“The 2019 harvest season has been delayed in our Western Canadian region by difficult weather conditions, which has not improved farmer sentiment following the challenging harvest conditions also experienced in 2018,” the company said. “This continued delay of harvest remains an opportunity to market used equipment in season, although the difficult conditions have reinforced producer’s caution toward capital commitments.

“This is an opportunity to strengthen our base by providing best-in-class uptime toward the end of the harvest window, while building on the continued health of our product support business.”