CNH Industrial reported third quarter consolidated revenues of $6.4 billion, a year-over-year drop of 5%. Net sales of its agricultural segment dropped 7% vs. the third quarter of 2018. 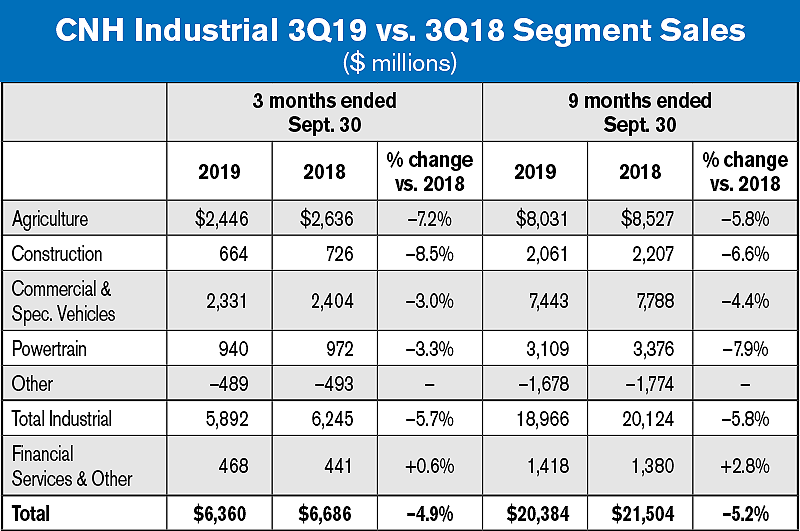 The company said that industry volume deceleration coupled with an unfavorable product mix drove sales down, primarily in North America and the Rest of World regions. This was partially offset by a sustained price realization performance in excess of 2 percentage points.

North American sales of farm equipment fell 7% in the third quarter and were also down in Europe by 4%. CNH Industrial’s Rest of World sales fell by 20%. The only region that saw increased sales was in South America where ag equipment sales rose by 1%.

According to the company, net price realization and sustained aftermarket activity were more than offset by the unfavorable volume and product mix impacts. It also reported that it experienced higher product costs as result of increased raw material and tariffs.

In its 2019 outlook CNH Industrial’s management said in the third quarter, industry conditions in the main agricultural markets have further deteriorated due to market uncertainties and negative farmer’ sentiment, particularly affected by poor yield conditions in various regions.

The company also noted that recent developments in U.S.-China trade negotiations and the related potential implications for commodity prices could have a positive impact on sentiment and, accordingly, equipment purchases in the U.S. and Canada toward the end of the year.