Since the passage of the Energy Policy Act in 2005, ethanol became a major catalyst in the growth of corn production and pricing, as corn became the most economical feedstock for producing ethanol. E10, motor fuels that contain 10% ethanol, became the norm for fuel blends. The recent (May 31, 2019) ruling from the U.S. EPA allowing the year-round sale of motor fuels containing up to 15% fuel ethanol (E15), many in U.S. agriculture, including equipment dealers and manufacturers, had hopes for a repeat of the boost the passage of the Renewable Fuel Standard produced for the industry during the past decade or so. 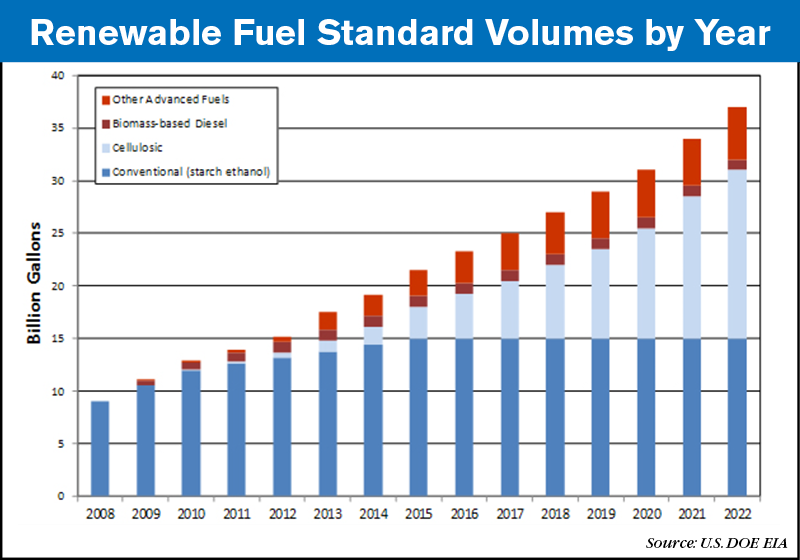 According to data released by The U.S. Energy Information Admn. on July 16, the impact this time around will most likely not match that of the initial passage of the RFS and will take longer to be felt. In part, the delayed reaction this time around is due to the infrastructure needed to make E15 more widely available.

The May 15 ruling increases the availability of E15 blends in the U.S., which are currently sold at more than 1,800 retail fuel stations across 31 states, according to Growth Energy, a trade association that represents producers and supporters of fuel ethanol.

Most motor gasoline fuel sold in the U.S. contains up to 10% ethanol (E10). Ethanol acts as a fuel oxygenate to create a cleaner burning fuel and to raise the octane rating of motor gasoline. Higher ethanol blends such as E15 may sell for lower prices relative to E10 when the price of ethanol is lower than gasoline blendstock on an energy equivalent basis. Presently, E15 is sold at a 3 to 10 cent/gallon price discount relative to E10, or 87 octane blends, in most markets.

In 2011, EPA granted a partial waiver under the Clean Air Act (CAA) to allow the use of E15 in motor vehicles manufactured in model year 2001 or later. Among other restrictions, the partial waiver did not change existing regulations that prohibited the sale of E15 in conventional fuel markets during the summer driving season, defined as June 1 to Sept. 15 of each year. During the summer, EPA is more restrictive on the volatility of motor gasoline introduced into the market in order to limit evaporative emissions that contribute to ground-level ozone.

The expanded waivers for E15 were announced in October 2018, which will help to increase domestic energy production and to support the domestic agriculture industry. The final rule updated EPA’s interpretation of the statute. By considering E10 and E15 as substantially similar, the new interpretation effectively opened the opportunity for year-round E15 sales in most markets.

Although new fueling stations typically install fueling equipment that is E15 compliant, older stations may need to install new equipment to accommodate the slightly more corrosive nature of E15 gasoline. Retrofits may be cost-prohibitive if they require equipment, such as underground storage tanks, to be replaced. 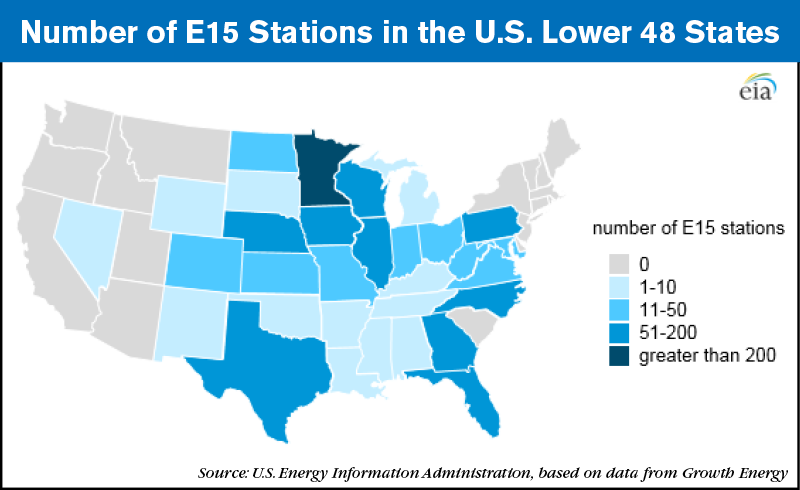 EIA does not collect E15 sales data and state-level information is limited. The Minnesota Commerce Department reported 59.4 million gallons of E15 sales in the state in 2018, nearly triple 2017 levels. According to an Iowa Department of Revenue report, state E15 sales were about 35.5 million gallons of E15 in 2018, almost a 30% increase over the previous year. In 2018, E15 was sold at about 15% and 10% of retail fueling stations in Minnesota and Iowa, respectively.

On a national level, however, less than 2% of retail fueling stations offer E15. In other words, E15 has plenty of room to grow, but its expansion is expected to come slowly.