According to numerous reports, President Donald Trump is expected to announce the use of gasoline with 15% ethanol (E15) year-round. The Des Moines Register is reporting that President Trump has directed the EPA to begin rule making that will allow its use regardless of region or time of year.

E15 is banned during the summer months, based on concerns it contributes to smog, a claim ethanol advocates say is unfounded. Almost all gasoline contains 10% ethanol.

According to USA Today, “The move should help Iowa farmers and U.S. consumers at a time when years of record harvests — and Trump trade wars with Canada, Mexico and China — have helped depress corn and soybean prices. U.S. farm income this year is expected to be 50% below a 2013 high.”

The National Corn Growers Assn. (NCGA) praised the president’s move prior to the official announcement. “With nine out of 10 vehicles on the road today approved to use E15, consumers should have this lower-cost option year-round,” said Lynn Chrisp, president of the association. “NCGA will be taking an active role in the regulatory process, urging EPA to move forward with making the president’s commitment a reality by next summer.”

After a rapid run up in ethanol use starting in 2005, ethanol production plateaued in 2013. In 2002, prior to enactment of the Renewable Fuel Standard, only about 995,000 bushels of corn was use for ethanol. By 2013, 5.1 billion bushels of corn were used for ethanol. In 2017, this increased to 5.5 billion bushels. Little growth was projected if the limit for gasoline year-round remained at 10% ethanol.

Today, about 30% of corn is used for production of ethanol and another nearly 9% is used as Dried Distillers Grains with Solubles, a byproduct of ethanol production that is used as livestock feed.

The use of ethanol in gasoline was one of the factors that helped fuel the farm equipment boom between 2007-14. It’s hoped that the move to E15 will prompt increased corn usage and prices, which could lead to improved ag machinery sales in the near term. 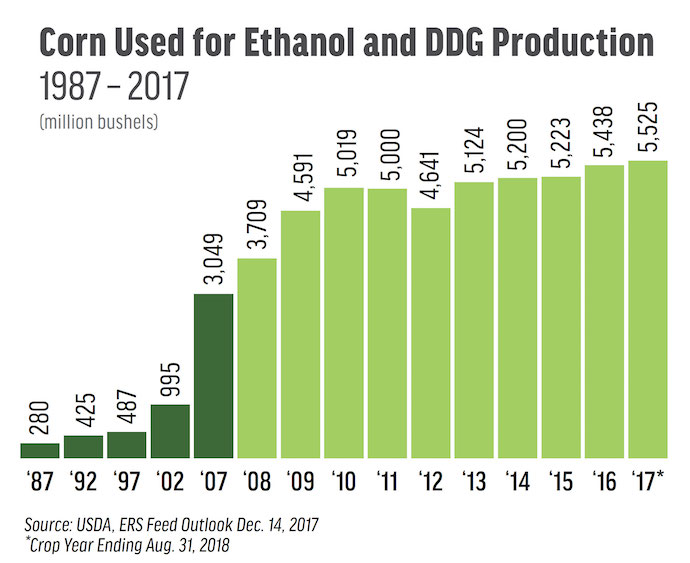 Record Harvest Not a Positive for Ag Equipment Sales