According to Purdue University/CME Group, after rising sharply two months in a row, the Ag Economy Barometer weakened significantly in August and fell back to a reading of 124, down 29 points compared to a month earlier and just slightly below the June reading of 126. The barometer’s decline was attributable to declines in both the Index of Current Conditions, which dropped 19 points below the previous month, and especially the Index of Future Expectations, which fell 34 points below its July reading. This month’s nationwide survey of 400 U.S. agricultural producers for the Ag Economy Barometer was conducted from Aug. 12 through Aug. 20, 2019. Weaker sentiment was fueled in part by both crop and livestock price declines that took place during late July and early August. In particular, prices for corn and soybeans fell sharply as crop conditions improved and USDA released larger than expected crop production estimates on the August Crop Production report. Virtually all of this month’s survey responses were collected following USDA’s release of the Aug. 12 Crop Production report. 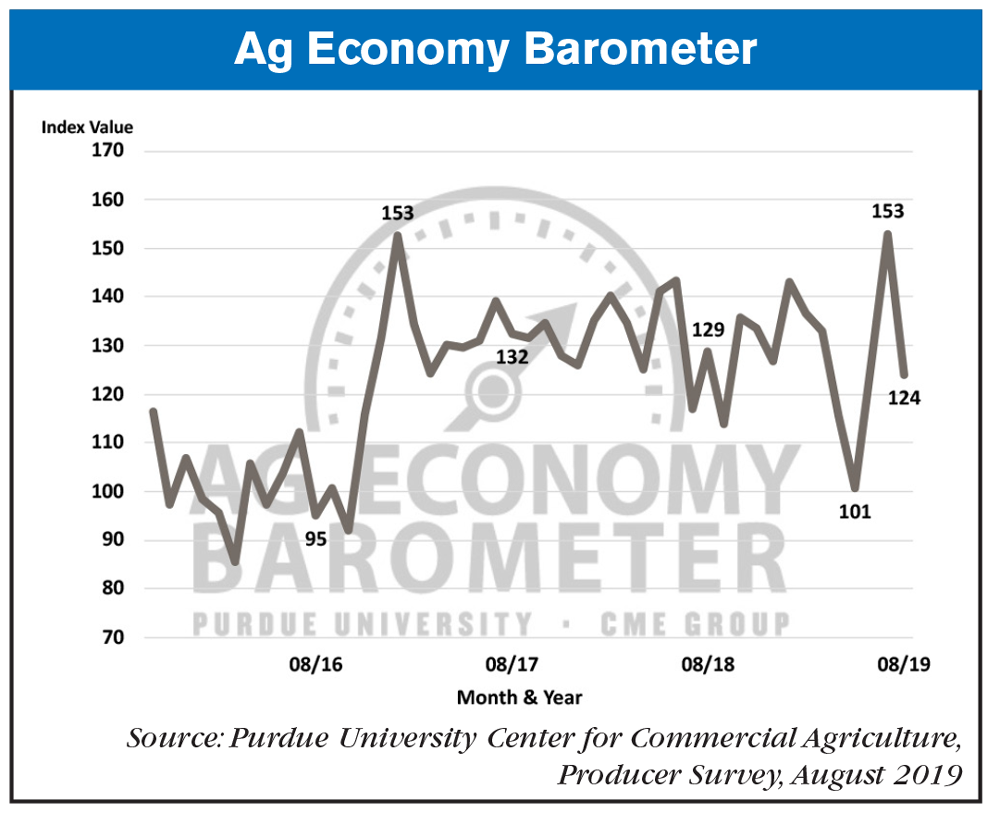 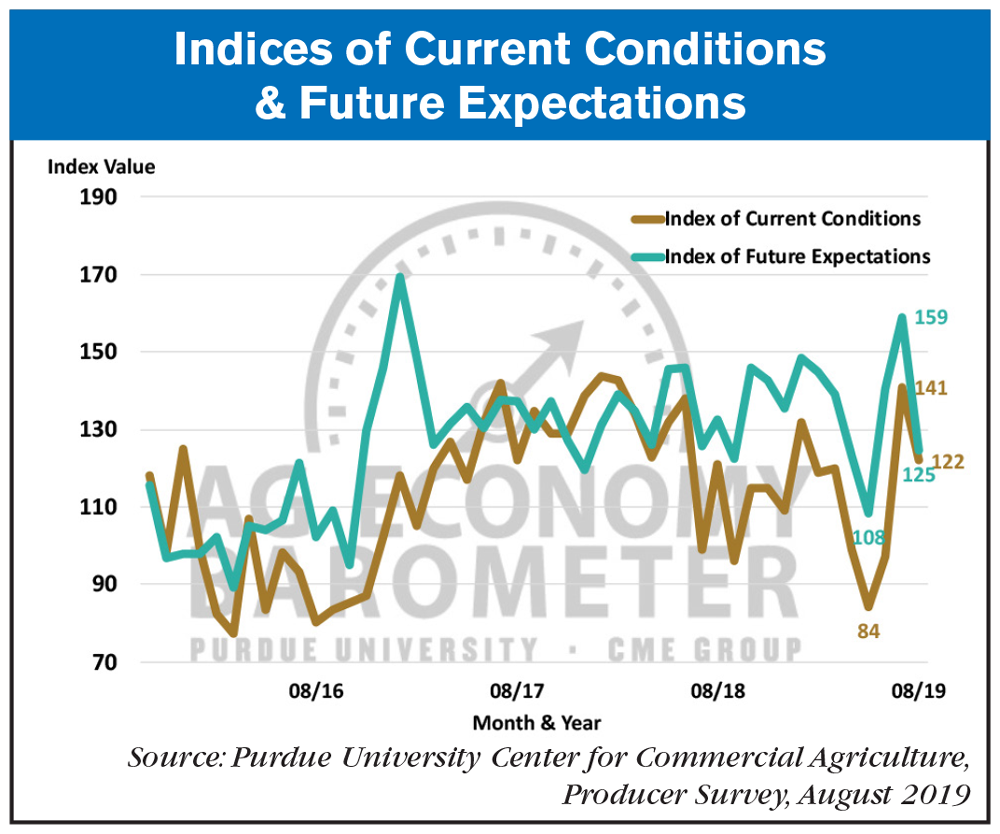 Producers’ concerns about the future of the farm economy led to a more negative outlook on both the advisability of making capital investments in their farming operation and on their short-run farmland value outlook. The Farm Capital Investment Index (formerly known as the Large Farm Investment Index) fell to a reading of 56 in August, 21 points lower than a month earlier, but still well above readings from June (42) and May (37) of this year, as farmers’ weaker expectations for future economic conditions on their farms made them less inclined to believe now is a good time to make large investments in buildings and farm machinery. 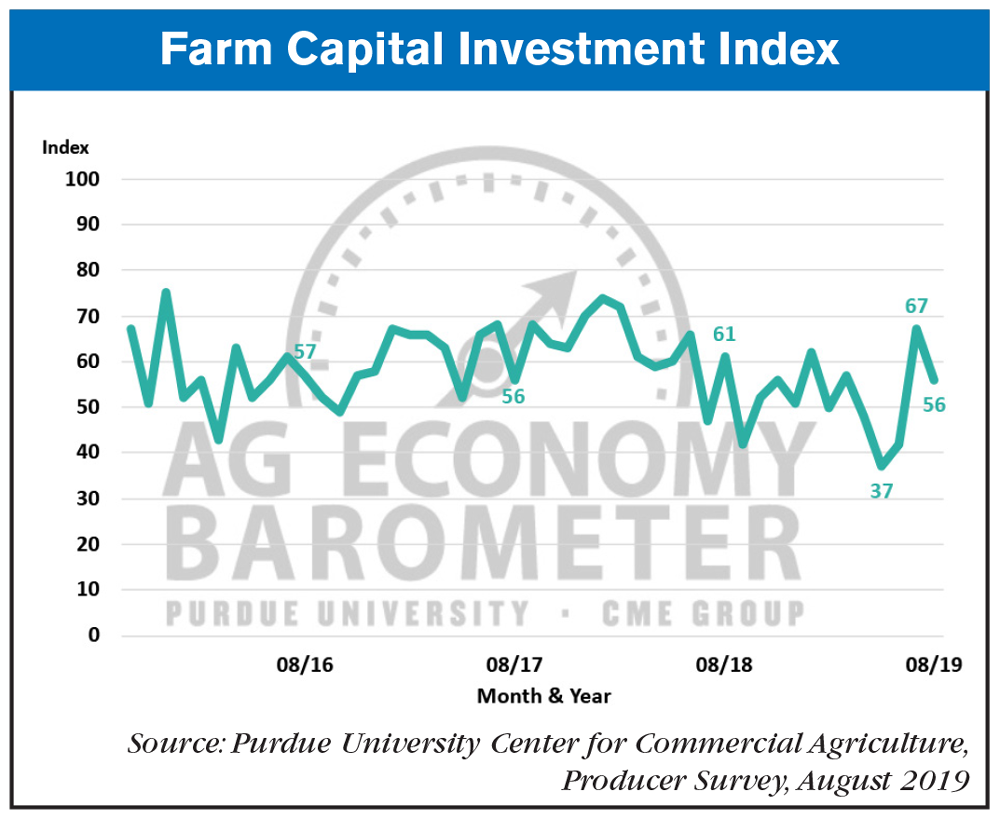 To learn more about how farmers view the MFP payments, Purdue posed two questions on the August survey. First, they asked to what degree does $16 billion in MFP payments to U.S. farmers relieve your concerns about the impact of tariffs on your 2019 farm income. Second, in a follow-up question, they asked whether or not respondents expect USDA to provide payments to U.S. farmers for the 2020 crop year.

Responses indicated that over two-thirds (71%) of farmers feel that the 2019 MFP program will either completely or somewhat relieve their concerns about the impact of tariffs on 2019 farm income. However, nearly three out of ten respondents said “not at all” in response to this question, indicating that they felt the MFP payments fell short of making up for income losses attributable to the ongoing tariff battles. Looking ahead to 2020, 58% of farmers in our August survey said they expect another MFP payment to be made to U.S. farmers for the 2020 crop year. 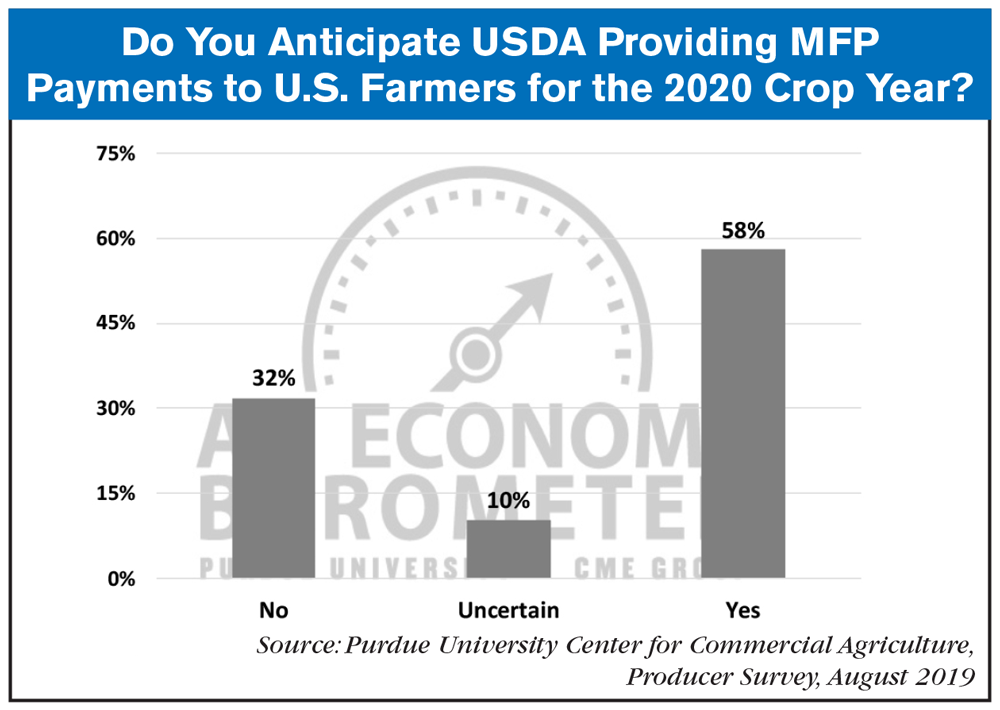