The latest episode of On the Record is now available! In this week’s program, we report on Deere & Co.’s second quarter earnings and outlook for the remainder of the year. Publicly traded dealer groups Cervus Equipment and Rocky Mountain Dealerships both reported their first quarter results recently, and put an emphasis on moving used equipment in the quarter. CNH Industrial’s first quarter results took a hit due to unfavorable exchange rates. Also in this episode, Stanley Elliot, analyst with Stifel, provides some analysis of the 2017 USDA Census of Agriculture. In the Technology Corner, Jack Zemlicka talks about planned updates to the Agricultural Electronics Foundation’s compatibility database.

Deere & Co. reported its second quarter results this morning. Net income for the quarter was $1.14 billion, down 6% vs. the same period last year. Total net sales and revenues were up 6% to $11.3 billion, compared to $10.7 billion in the second quarter of 2018.

For the Ag & Turf division, worldwide net sales for the second quarter were up 3% to $7.3 billion. The company says Ag & Turf sales for the quarter and year to date increased due to higher shipment volumes and price realization, partially offset by the unfavorable effects of currency translation. 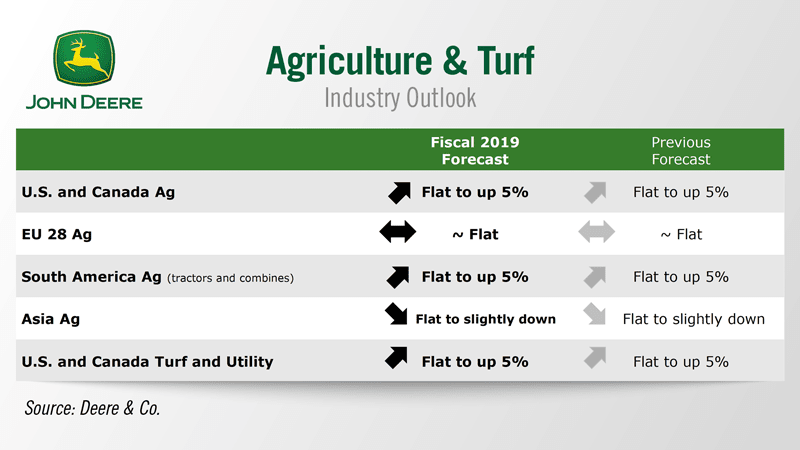 Dealers On The Move

Blanchard Equipment, a John Deere dealer based in South Carolina, announced the relocation of its Clinton, S.C. dealership to Greenwood, S.C. in May.

John Deere dealer Cazenovia Equipment will be consolidating its Watertown and Sandy Creek, N.Y. locations into one 25,000 square foot retail and service center. This will bring Cazenovia’s number of branches down to 8.

Premier Equipment Co., a New Holland dealer based in North Carolina, recently purchased Hines Equipment. They bought the property back in February of this year, along with Enfield Tractor and Equipment.

But for the last decade-plus, the Agricultural Electronics Foundation has worked to improve functionality between precision systems, while also increasing awareness of ISOBUS-certified components.

In 2014, the AEF debuted its searchable database of ISO-certified equipment as a resource for manufacturers and their dealers to assess compatibility.

Initially, dealer access to the database came through the manufacturer, which had its limitations, according to Andrew Olliver, marketing and communications lead for AEF.

At this year’s AEF Plugfest event last week in Lincoln, Neb., I caught up with Olliver who shared some of the planned updates to the database which will improve dealer access.

Olliver adds that the goal of the database for dealers is to be a tool for knowing in advance which products and systems are ISO-certified, to minimize troubleshooting. 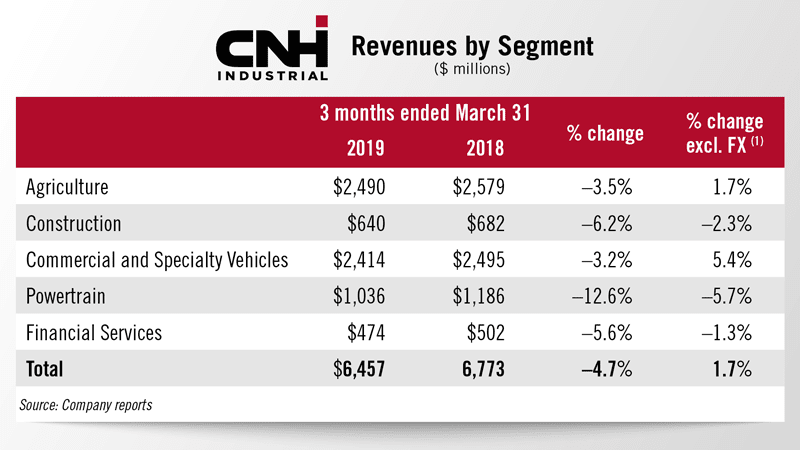 In its outlook for the remainder of 2019, CNHI said that sentiment in the agricultural end-markets remains muted in the short-term, primarily as a result of uncertainties related to unresolved trade tensions, recent negative weather events in Australia and Northern Europe, and geopolitical and macroeconomic uncertainties. 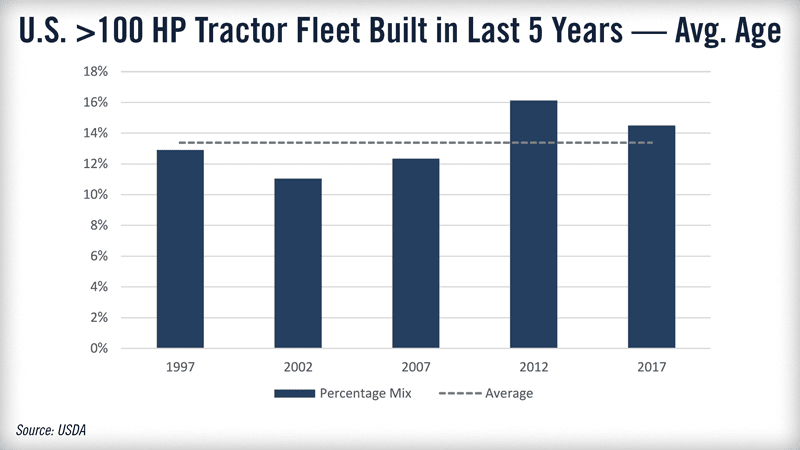 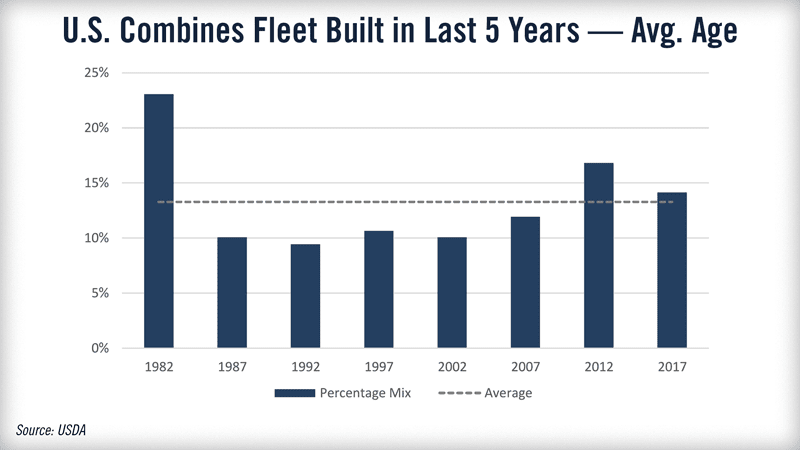 Elliott also said that total size of the U.S. fleet is shrinking as equipment gets larger. 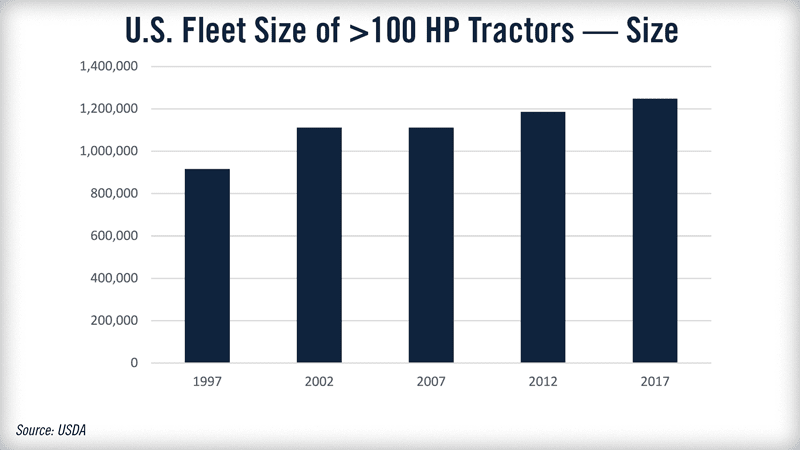 For combines, the number of units in operation peaked in 1987 at  approximately 667,000 and has fallen to roughly 323,000 units in 2017. Elliott said they “believe this is also due to larger, more efficient combines being sold relative to prior decades, but underlying data does not break out combines by size.” 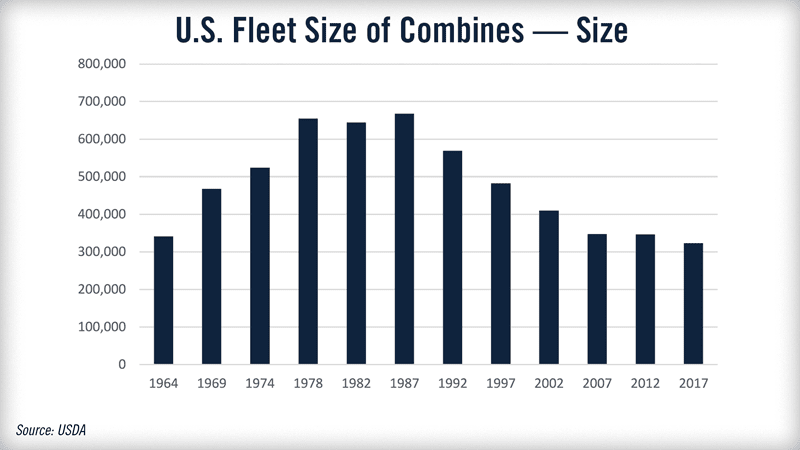 “But then the second piece would be the migration that we've seen into larger more production class farms. In terms of the age of the fleet. The USDA data because it's once every 5 years it's going to end up skewing the numbers a little bit higher than it would be. Alright, yes, right just because you're pulling in from some of the heavier years, but depending on your assumption for you are looking at the fleet age is that we continue to see and undergo more of a normalization, you know, admittedly that those numbers are kind of skewing things may be a little bit higher just because of the time, the 2012-13 and 2014 period … but fleet age is a little bit ahead of where we've been in the past.”

Rocky Mountain Dealerships, Case IH’s largest agriculture equipment dealer in Canada, reported that its first quarter sales in 2019 dropped 19% or by nearly $42 million, to $178 million vs. $220 million for the same period in 2018. Gross profit decreased by 5% or $1.4 million to $25.6 million from nearly $27 million for the first quarter of last year. RME said the fall off was due primarily to a $47 million decline “in same store new equipment sales … as we limit presale activity and focus on distributing existing inventory.” Garrett Ganden, president and CEO, said, while they had faced challenges this quarter, their sales and operations teams delivered solid revenue growth in both parts and service. 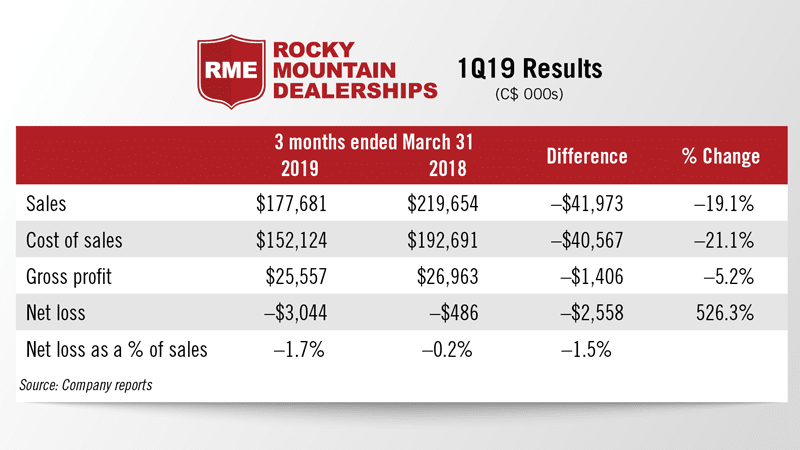 Ben Cherniavsky, analyst at Raymond James, cites RME’s growth in parts and service revenues and the future prospects of the dealership’s new stateside operations in Kansas, saying that, “… this location could lead to some compelling opportunities for both organic growth and/or bolt-on acquisitions.”

Cervus Equipment, John Deere’s largest Canadian dealership group, announced a 6% drop in consolidated revenues for the first quarter of 2019. Revenues from its equipment sales during the first quarter were down nearly 10% compared to the same period in 2018, when revenue declined to C$235 million from $249 million. 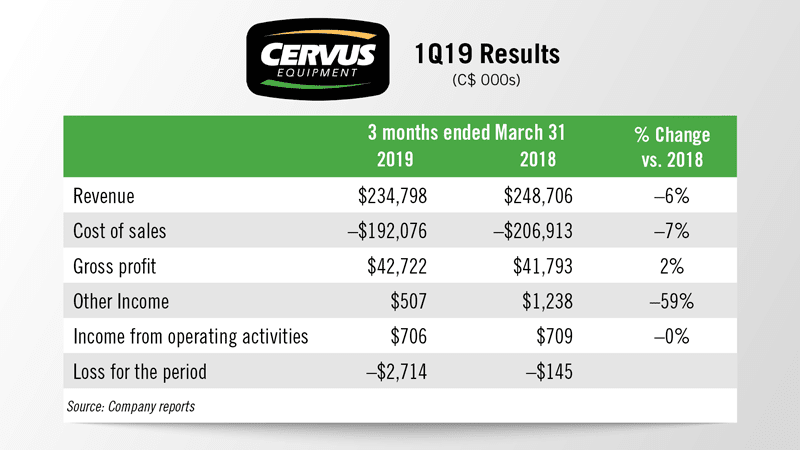 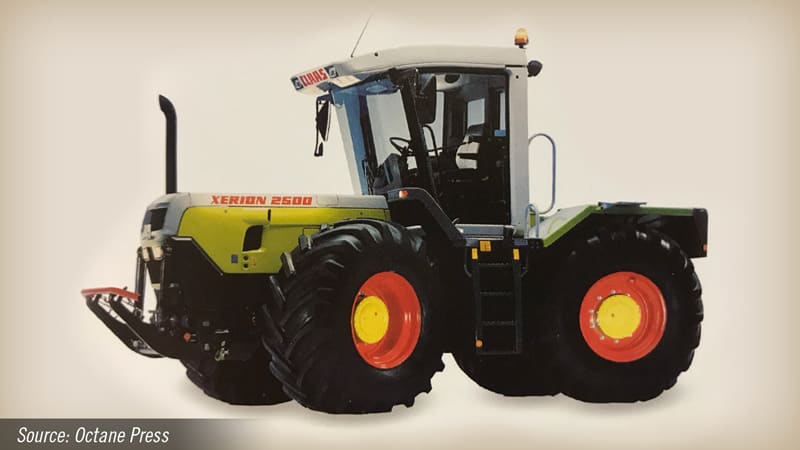