The latest episode of On the Record is now available! In this week's episode we review a recent report by the Federal Reserve Bank of Minnesota on farm bankruptcies. While the trend is on the rise, it hasn't yet reached its peak. Also in this episode: the top tractor brands rated by European farm equipment dealers, how one dealer is expanding its agronomic services, Deere & Co.'s fourth quarter and fiscal year 2018 results and an improvement in dealers' used equipment inventories. 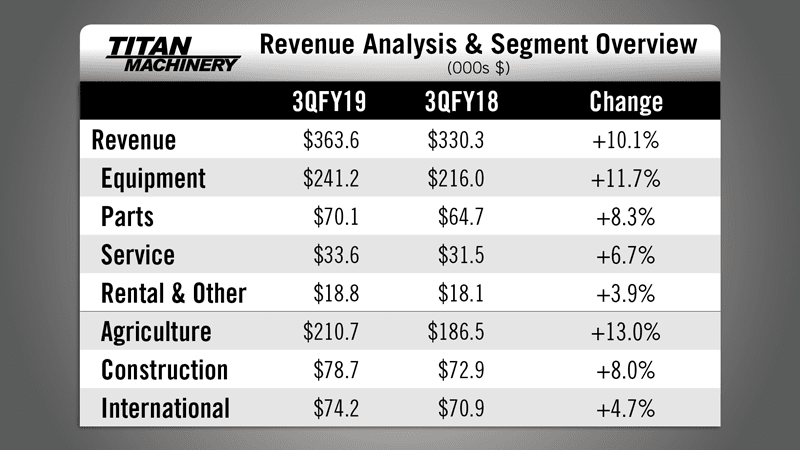 Revenues from the sale of ag machinery were up 13% during the quarter to $211 million. For the first 9 months of the fiscal year, Titan reported farm equipment revenues increased by nearly 4% to $506 million.

Farm bankruptcies are on the rise and this trend has not yet peaked, according to the Federal Reserve Bank of Minneapolis. During the 12 months ended June 2018, 84 farm operations in Wisconsin, Minnesota, North Dakota, South Dakota and Montana had filed for chapter 12 bankruptcy protection — more than twice the level seen in June 2014.

These have been particularly high among dairy farmers and smaller operators, which tend to be more exposed to large price fluctuations. According to the report, about 60% of the recorded bankruptcies during this period occurred in Wisconsin. While it remains the second largest milk producer behind California, the average dairy herd in Wisconsin is 153 cows. In California, the average herd is 1,300.

According to an October report from CoBank, current low milk prices and price volatility is making it increasingly difficult for small operators to compete and large operations have a better chance of surviving during these cycles. 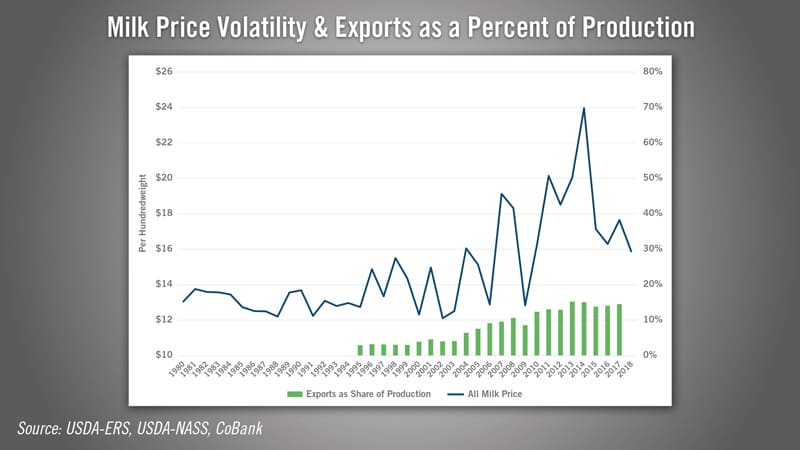 Larger operations also have significant economies of scale advantages that lower their cost of production per unit of milk far below that of smaller operations. According to CoBank, the biggest reduction of unit costs by increasing scale are in the categories of machinery and equipment, and the opportunity cost of unpaid labor. 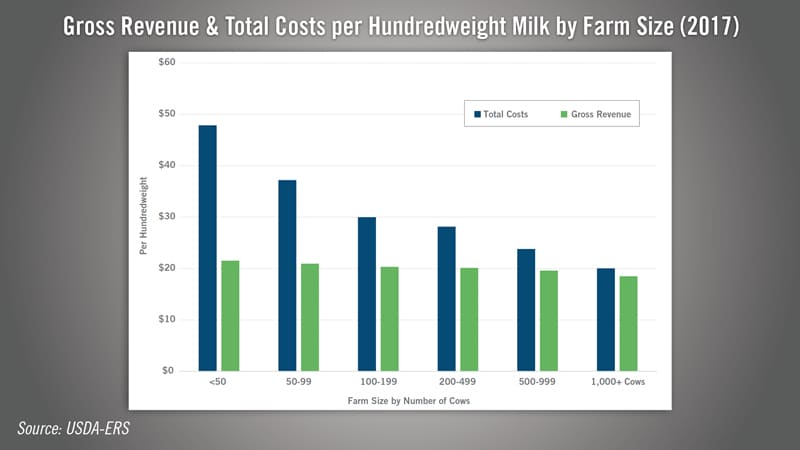 This week’s Dealers on the Move include H&R Agri-Power, Cervus Equipment and Reuter’s Equipment.

Case IH dealer H&R Agri-Power acquired 4R Equipment in McLeansboro, Ill. This brings H&R’s total locations to 18 and is the second location in Illinois for the dealership.

New Holland dealership Reuter’s Equipment closed its store in Albert Lea, Minn., on Nov. 19. The dealership still has 6 other locations in Iowa.

Now here’s Jack Zemlicka with that latest from the Technology Corner.

Working off the understanding that precision products, farm machinery and agronomic decision-making are intertwined, Western Sales, a 6-store John Deere dealership in Saskatchewan, hired its first full-time agronomist in 2010.

The dealership also developed its patented FieldSmart platform, which provides a suite of precision ag services for its customers including field scouting, seeding and fertilizer prescriptions and agronomic data analysis.

Dubois acknowledges that it’s a unique approach to expanding precision business because there is overlapping service areas among the dealer groups that Western Sales is serving.

However, he adds that there was a need to create a business model which allows for growth beyond selling precision widgets and be an agronomic service authority not only to farmers, but other precision retailers.

You can learn more about how Western Sales is expanding its agronomic service from Dubois who will be speaking on the topic at the 2019 Precision Farming Dealer Summit this January in Indianapolis.

Kubota and Fendt rated as the top brands in the European “Dealers Satisfaction Index” (DSI) for 2018. More than 1,000 farm equipment dealers from 10 European countries participated in a survey aimed at ranking the major tractor brands based on 14 criteria. 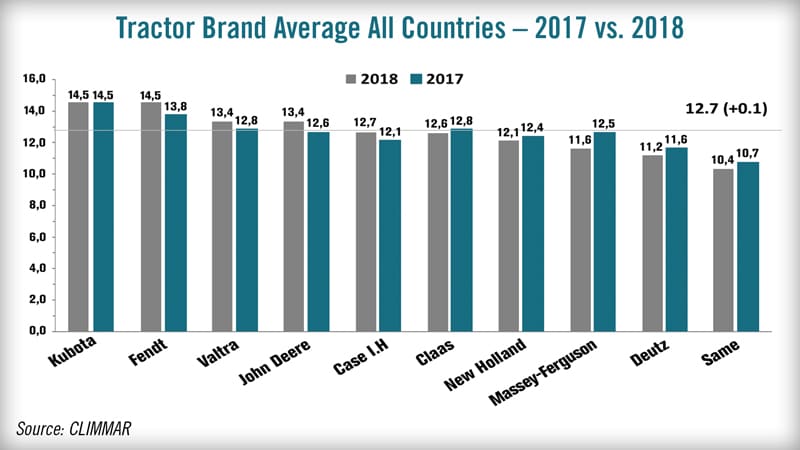 The survey was conducted by CLIMMAR, a network of 16 national associations, headquartered in the Netherlands, that represent ag machinery dealers across much of Europe.

In the U.S., the Equipment Dealers Assn. conducts a similar survey. This year Claas was added to the full line manufacturer category and ranked highest, followed by Kubota and John Deere.

In the Tractor category, LS Tractor was the highest rated manufacturer in North America. 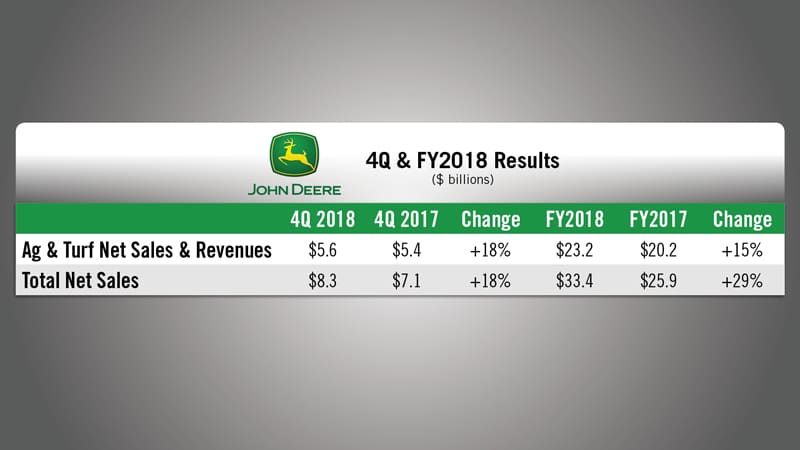 Looking ahead to 2019, Deere is forecasting ag equipment sales to be flat to up 5% in the U.S. and Canada and up about 3% worldwide.

Senior Vice President of Sales & Marketing John Lagemann says they’re seeing notable excitement from both dealers and customers in Deere’s core Midwest markets concerning the 2018 crop where there are record yields in both corn and soybeans.

He says dealers believe this crop will positively influence equipment demand for 2019. However, he adds, “Despite this optimism, it is also important to acknowledge the ongoing uncertainty the industry faces regarding unresolved global trade issues. While many farmers believe these issues will be resolved before next year's harvest there's no doubt trade concerns have had an impact on farmer sentiment over the last several months.” 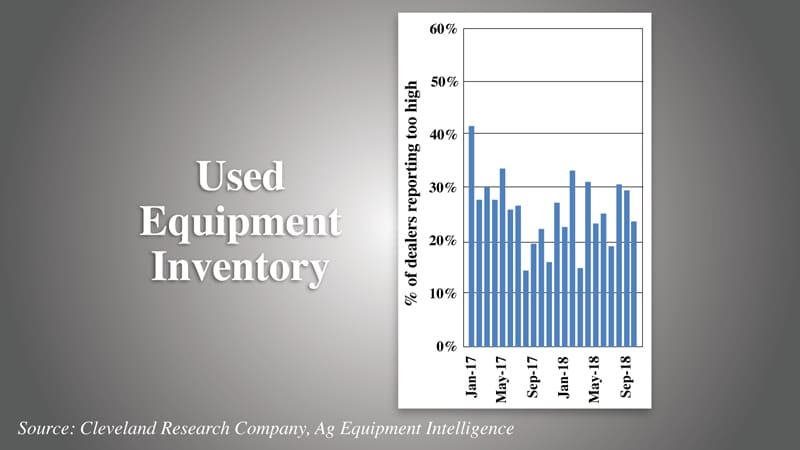 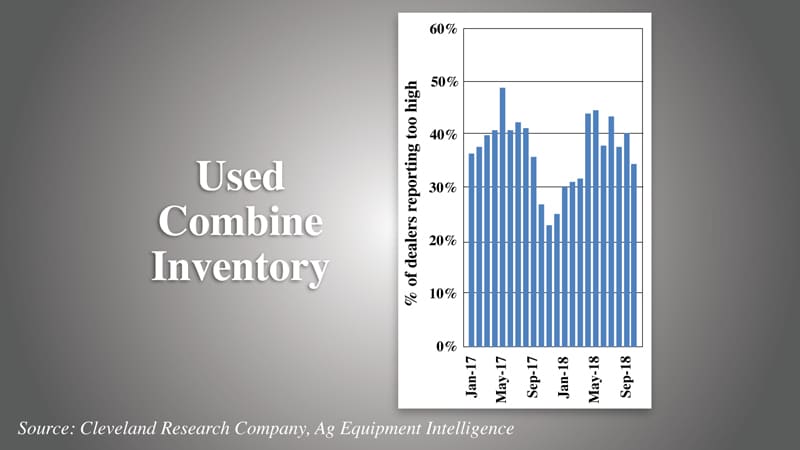 Something You Didn’t Know...

If you’ve read the New York Times bestseller, Killing the SS by Bill O’Reilly and Martin Dugard, you’ve seen the references to a German farm equipment manufacturer that shares the name of one of the evilest names in human history. 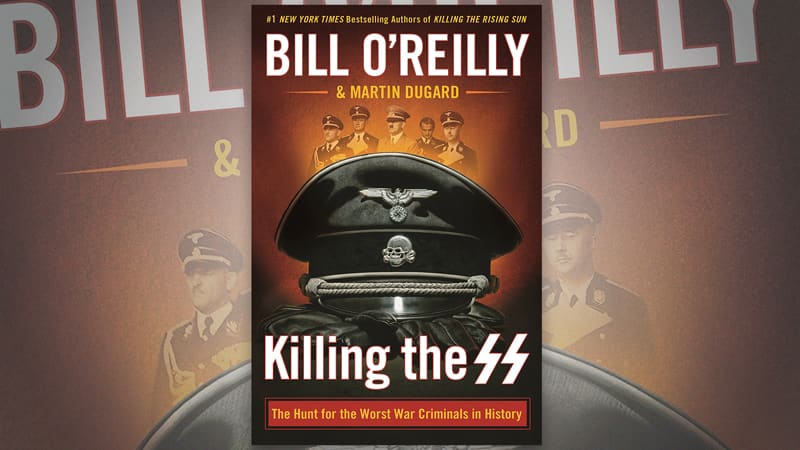 The infamous Dr. Josef Mengele was known as the “Angel of Death” for the atrocities performed on Jewish prisoners at the Auschwitz death camp in Poland during World War II. He was a son of Karl Mengele, the Bavarian farm machinery manufacturer Karl Mengele and Sons. The elder Mengele was a World War I veteran and SS member, who’d established a name for threshing machines and manure spreaders. 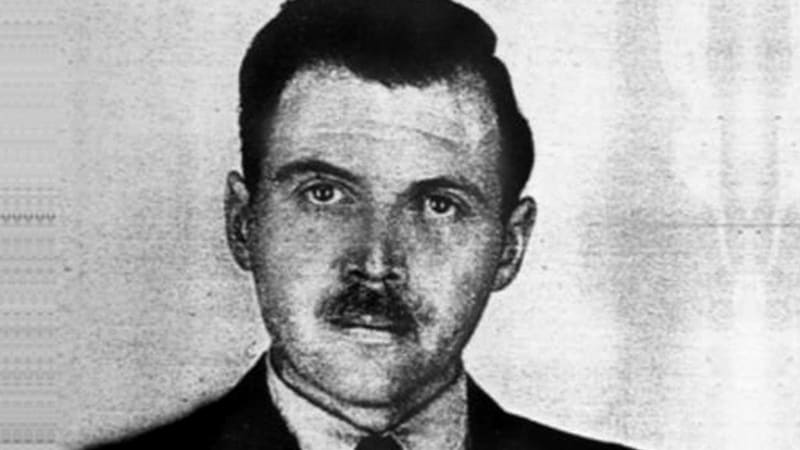 As detailed in the book, Dr. Josef Mengele escaped to South America after World War II and drowned in Brazil 1979, never to have been convicted of his crimes. In addition to receiving payments from the farm machinery enterprise for 35 years in hiding, he is said to have also worked as a sales rep for the company in Paraguay. 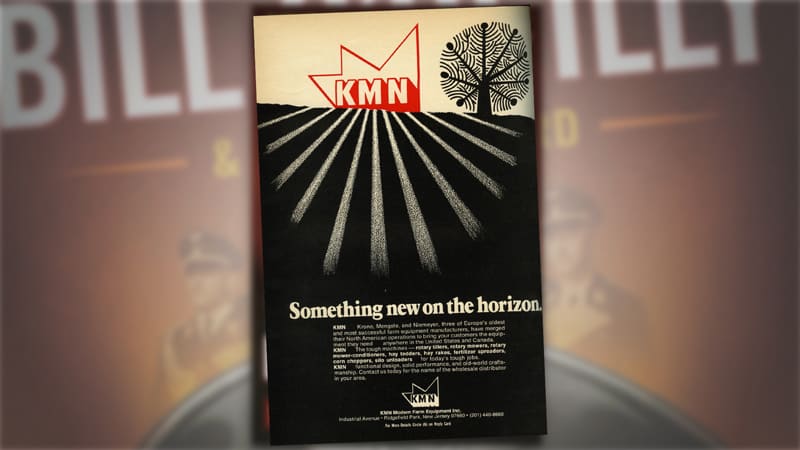 The equipment manufacturer entered the U.S. in 1973 with the joint distribution company of Krone-Mengele Niemeyer, or KMN, based in New Jersey. Krone was the only one of the three to continue on in the U.S.

Mengele was one of Europe’s largest farm equipment manufacturers in the 1980s before needing to be rescued from bankruptcy by the Bavarian government. The company was eventually sold to Lely in 2010, and taken over by AGCO in 2017.

Could Consolidation Among Top OEMs Happen in the Next Two Years?