The latest episode of Ag Equipment Intelligence's On the Record is now available! In this episode, we examine how farmers are responding to $12 billion aid package introduced by the Trump Administration and Smart Ag's new autonomous technology aftermarket kit. We also cover Titan Machinery's solid second quarter gains, results from Farm Equipment's first ever Marketing Expenditures survey and what new Case IH Vice President of North America Scott Harris sees as priorities for the company, and it's customers.

The August Ag Economy Barometer from the Purdue Center for Commercial Agriculture rebounded in August to a reading of 129 after falling to 117 in July. Although the producer sentiment index increased by 12 points in August, it remains well below its late spring readings of 141 in May and 143 in June. 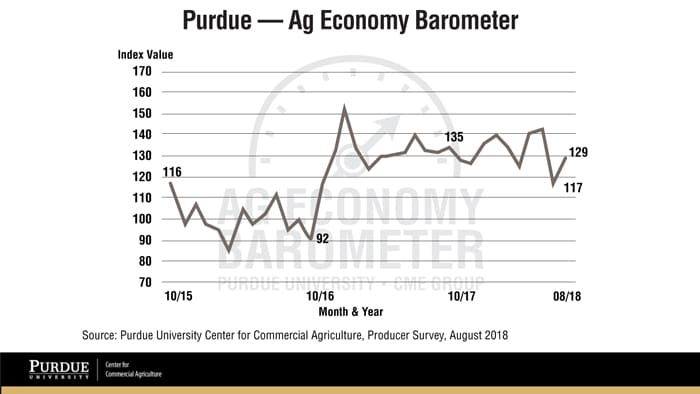 In the August survey, producers were asked to what degree President Trump’s $12 billion farm aid package relieves their concerns about the impact of tariffs on their farm’s income.

On Tuesday, USDA launched the trade mitigation package to assist farmers who may suffer from the effects of a trade war. 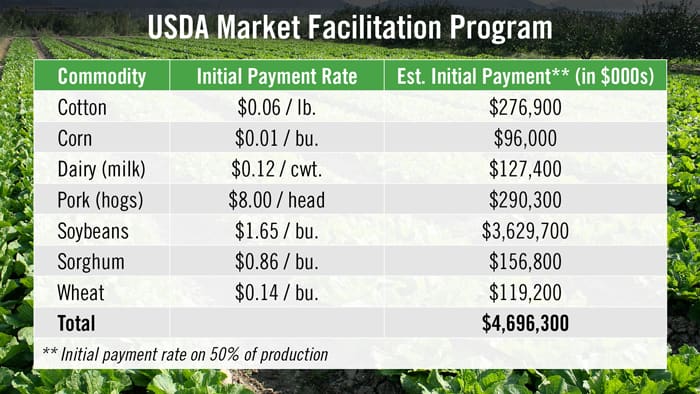 Producers of certain commodities can now sign up for the Market Facilitation Program, while USDA will also begin to purchase identified commodities under a food purchase and distribution program. Additionally, USDA has begun accepting proposals for the Agricultural Trade Promotion Program, which will help American farmers find and access new markets for their products. In total, USDA will authorize up to $12 billion in programs, consistent with World Trade Organization obligations. 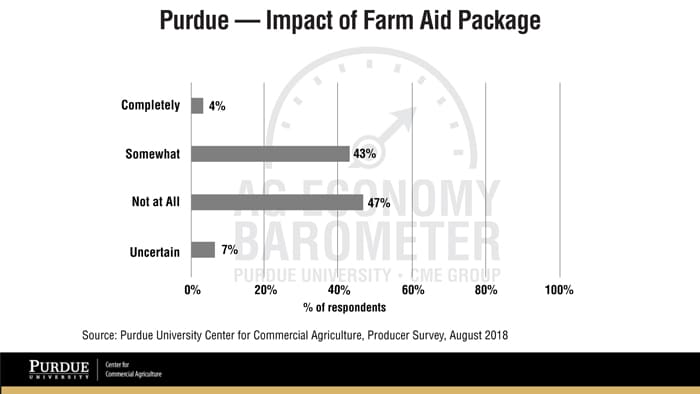 USDA predicts net farm income will be down another 13% this year.

This week’s Dealers on the Move include Sydenstricker Implement, Advantage Ag and PrairieLand Partners and Concordia Tractor.

Advantage Ag and Equipment, a New Holland dealer in Ohio, is consolidating stores to create an agriculture super store in Mount Vernon. The Zanesville location will be closing in mid-September.

PrairieLand Partners and Concordia Tractor have announced the planned merger of their business operations, pending John Deere approval. The merged company will operate as PrairieLand Partners, will have 13 John Deere dealership locations throughout north central, central and south central Kansas. The merger is expected to close early January 2019.

Last week at the Farm Progress Show, Ames, Iowa-based technology developer Smart Ag showcased its AutoCart autonomous technology during a field day demonstration. Constructed as an aftermarket kit, the AutoCart can be installed into the cab of a tractor and synced with a combine during harvest season to give a grower control of two machines from one location.

As explained by Smart Ag’s Chief Technology Officer Mark Barglof, the AutoCart is intended to combat labor shortages during harvest season, notably in rural communities where fewer people are available to complete tasks in the field.

The AutoCart interface is operated though a wireless tablet app, which allows users to track and adjust the speed and route of the tractor, Barglof says, adding that the system’s recognition and data-collecting capabilities will allow field routes to become increasingly accurate over time.

“Inside of the tractor system is the control to physically move the tractor, but also an artificial intelligence engine with capabilities to increase its intelligence over time. So, the longer it operates, the more information we get from the field.”

Barglof says the platform works with John Deere 8R series tractors, but developers intend to expand functionality to different types of equipment and brands. Approximately 10 dealerships across various states have partnered with Smart Ag in the preliminary stages of releasing the platform, including Ohio-based Info Ag Tech.

Speaking on the value of partnering with Smart Ag, Ag Info Tech’s CEO Tim Norris says the advancement of autonomy could shift the nature of his dealership to a service-based focus, working with customers to pre-calculate routes established and keep systems up to speed. Norris also anticipates the revival of smaller, seemingly outdated tractors in an industry driven by automation and aftermarket installments.

“What I do think will probably happen is you’ll see smaller tractors becoming more valuable. I also think there’s a pretty good long-term aftermarket strategy for it (Smart Ag) though, because a good 4240 could become a valuable farm mainstay implement again. You can have that 4240, no one really cares if it’s got a good cab or not. It doesn’t really have to have electronics as long as we can put the stuff on it to steer it.”

Ag Info Tech and other dealerships will be rolling out the technology in a limited scope over the next few months. Barglof says a full commercial release is expected for 2019 with price point estimates between $35,000-$40,000.

Dealership group Titan Machinery says its second quarter equipment sales were up nearly 15% vs. the same period last year with revenue from ag equipment up over 10%. Overall revenue increased by 11.5%. Gross profit was up by 11.6% and gross profit margin remained steady at 19.6%. 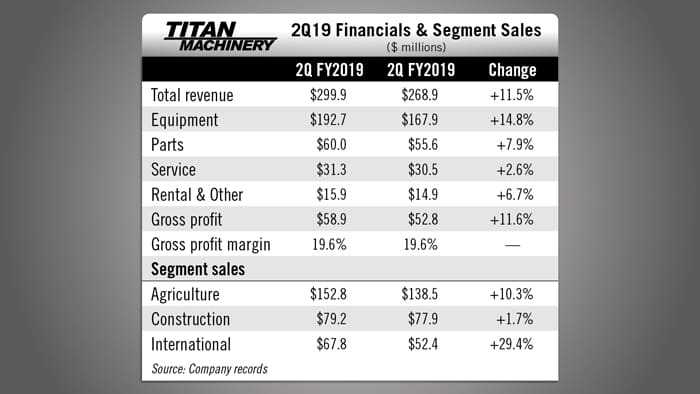 The company reports that each of its major revenue drivers improved during the second quarter, which ended July 31. In addition to the improving equipment turnover, parts sales increased by 8%, service by just under 3% and rental revenues were up by nearly 7%. In addition, Titan’s international sales saw an increase of nearly 30% compared to the second quarter of last year. Sales of construction equipment continue to lag, registering only a 1.7% gain for the quarter.

For the full year, Titan Machinery expects ag and construction equipment sales to be flat to up 5%, while international sales growth is expected to come in at 10-15%. The company is projecting equipment margins to be in 8.7-9.2% range, which is up slightly from the company’s earlier projections of 8.2-8.7%.

Farm Equipment recently conducted a first of its kind Marketing Expenditures Survey to help farm equipment dealers benchmark how they are allocating marketing dollars vs. the industry at large. 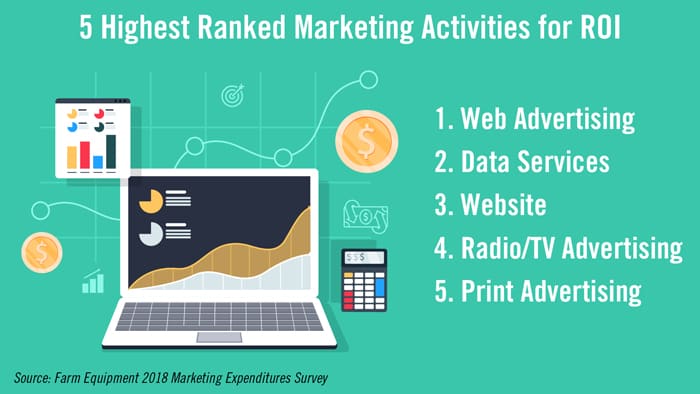 Dealers who shared their thoughts of the marketing survey with Farm Equipment editors said the results should tell dealers that they need to invest even more of their marketing dollars in digital activities.

Jeff Bowman, chief experience officer of the 89 store Case IH dealer Titan Machinery, says most dealers need to invest even more in digital channels. He said in an interview with Farm Equipment, “If I’m looking at ROI and what I am getting back for every dollar I spend, I still want to continue to push my highest ROI channels until I hit those diminishing returns.”

Scott Harris has only been in his new job as the Case IH vice president of North America operations since March, but says he has a good idea of what Case IH customers want from the company. He took over from Jim Walker, who retired after 12 years heading up Case IH operations in its NAFTA region.

He says he has spent his first 4 months on the job talking with producers and dealers, and what he has heard is that their priorities center around technology and labor.

“There's a couple of priorities out there today I think from producers. If I had to boil it down to two, [it would be] technology and labor. I think the two of them are somewhat linked. When you look at the developments that we're making today and have in our range plans for the future, they all are around automation. I'm not talking about the driverless tractors. I'm talking about functional automation, where we've got smart machines, if you will, that can make adjustments on the fly for soil conditions, and crop condition, and operating conditions, so that those manual adjustments don't need to be made by the operator. So a new operator can operate a machine as effectively as a skilled operator. That is, it's a priority for our producers and therefore it has to be a priority of ours. That's been consistent, a consistent message that I've gotten from producers that I've spoken to, as well as our partners in our dealer network.”

Last week at the Farm Progress Show, Case IH introduced an agronomic row unit for improving the accuracy of seed and fertilizer placement, as well as new control technology for its tillage tools and combines

The Geiser Manufacturing Co. was one of the pioneers in building steam plowing outfits. Its plowing engine of 1903 featured a patented “crown sheet protector,” which minimized the possibility of boiler explosions when moving downgrade. 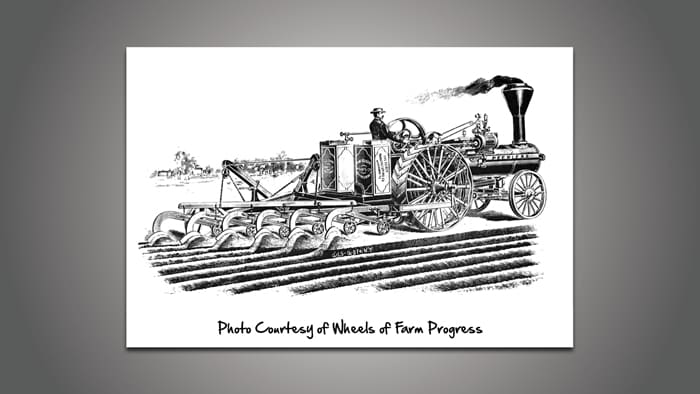 [Podcast] Do Producers Think the $12 Billion Aid Package Will Help?

Titan 'Rips the Band-Aid Off' with Inventory Reduction