Demand for loans for ag equipment and other capital expenditures continued to decline in the first quarter of the year, the volume of large non-real estate farm loans continued to have a significant effect on changes in farm lending, according to the Federal Reserve Bank of Kansas City. 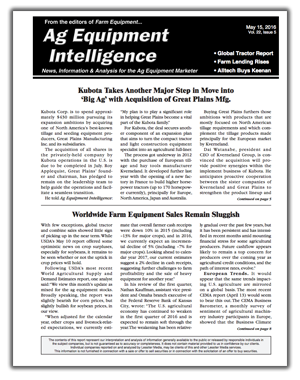 This article appeared in the May 2016 edition of Ag Equipment Intelligence.

To get access to more articles like this, subscribe to Ag Equipment Intelligence. With an annual subscription, you will receive monthly issues of the newsletter, monthly Dealer Sentiments & Business Conditions updates, the Dealer Business Outlook & Trends report, the Big Dealer report and other special reports.

If you would like to share a subscription with colleagues or clients, please contact Bree Greenawalt at 262-777-2408 or breeg@lessitermedia.com to learn about our multi-user and site licenses.

A report by Nathan Kauffman and Matt Clark of the KC Fed, reports that the pace of farm lending in the first quarter remained relatively brisk. Agricultural credit conditions deteriorated somewhat as repayment rates declined and delinquency rates picked up slightly alongside reduced farm income.

“Banks appeared to be taking proactive measures to reduce risk by increasing the amount of farm real estate used to collateralize large non-real estate loans and raising interest rates slightly. Though farmland values have remained relatively strong, a poor outlook for cashflow could continue to pressure a larger share of farm borrowers in the coming year, particularly those most highly leveraged,” said the report’s authors.

In the first quarter, loans larger than $100,000 accounted for 77% of the total volume of non-real estate farm loans, up from 72% in 2011 and 67% in 2006. “The increasing share of large loans could be due to persistently high input costs or farm expansion, but may also indicate producers have become increasingly dependent on financing amid tighter profit margins in the farm sector,” Kauffman and Clark said. 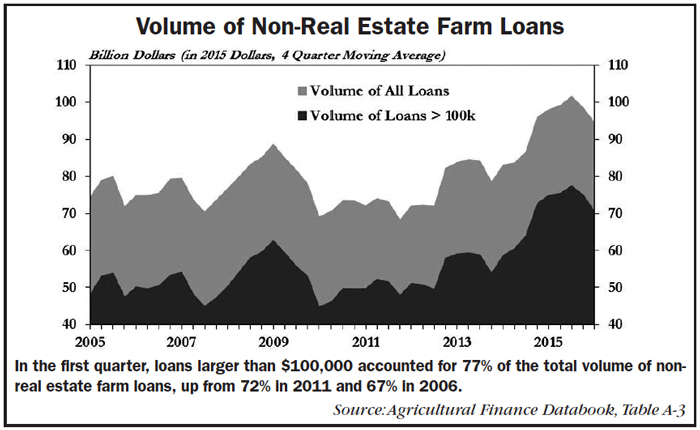 Interest rates on non-real estate farm loans also inched up in the first quarter, according to the report. “Rates for operating expenses and feeder livestock, which accounted for nearly 75% of non-real estate loan volume, increased slightly, but were similar to previous years. Interest rates for other livestock and farm machinery increased 52 and 34 basis points, respectively.” 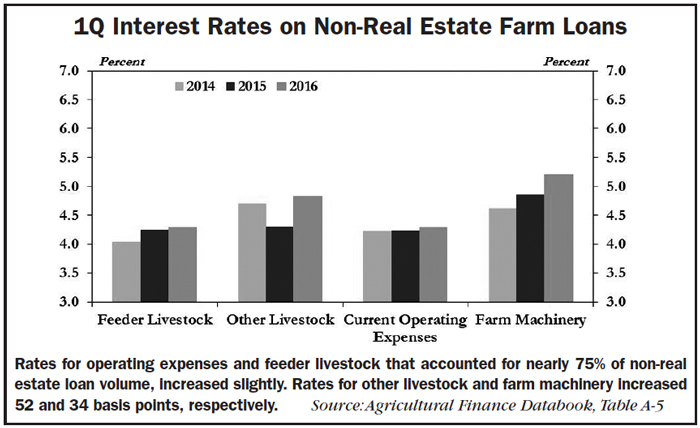 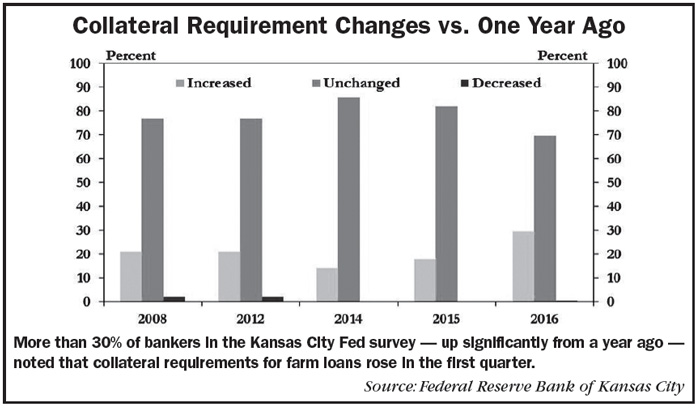 According to the KC Fed’s Ag Credit Survey report that was released on May 12, the gradual tug of low farm income has pulled loan demand upward. “This most recent uptick in loan demand may be more concerning because it has coincided with a period of falling repayment rates, softening farmland values and increasing collateral requirements.”

“However, marginal borrowers, particularly those with large capital debt and limited borrowing bases, could experience continued strains on liquidity. Moderating farmland values could also create additional concerns for lenders and borrowers, especially for those who have become more highly leveraged.”