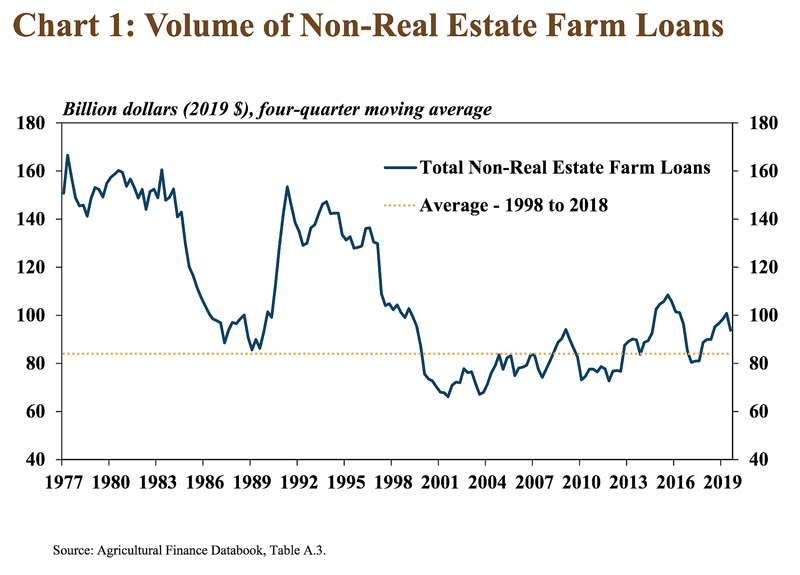 A decrease in the volume of farm operating loans drove the slowdown in non-real estate lending relative to a year ago. Following sharp increases in 2018, loans used to finance current operating expenses declined in the third quarter, returning to the prior 20 year average (Chart 2). Feeder livestock and farm machinery loans also were lower and made up the remaining share of the decline in non-real estate lending, while loans for other livestock increased. 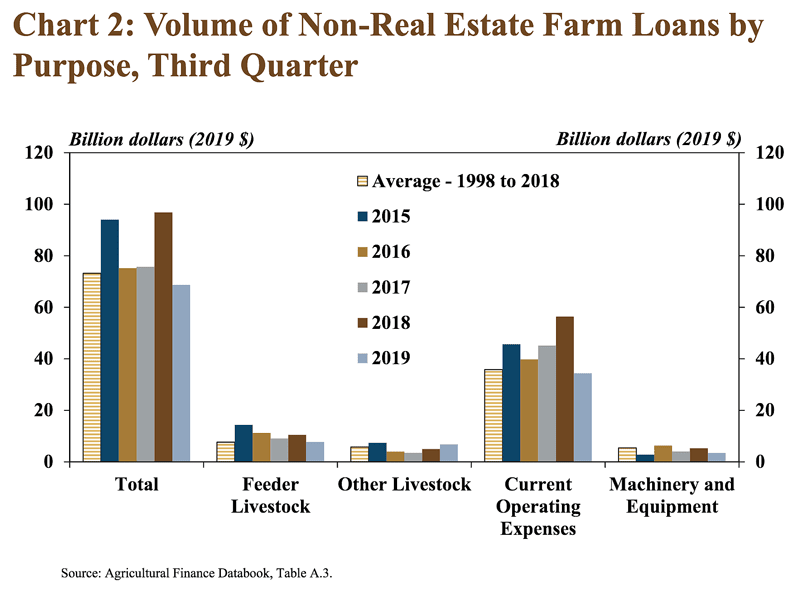 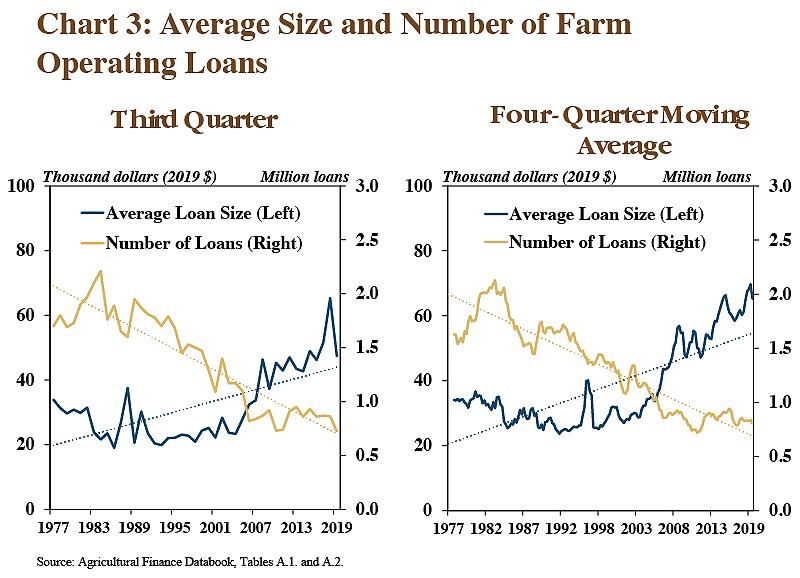 Interest rates on new non-real estate farm loans increased modestly. The average rate charged on all loan categories except feeder livestock rose slightly in the third quarter (Chart 4). The increase was largest for operating loans, which rose about 60 basis points from a year ago. Despite steady increases in recent years, interest rates on farm loans have remained well below historical averages. 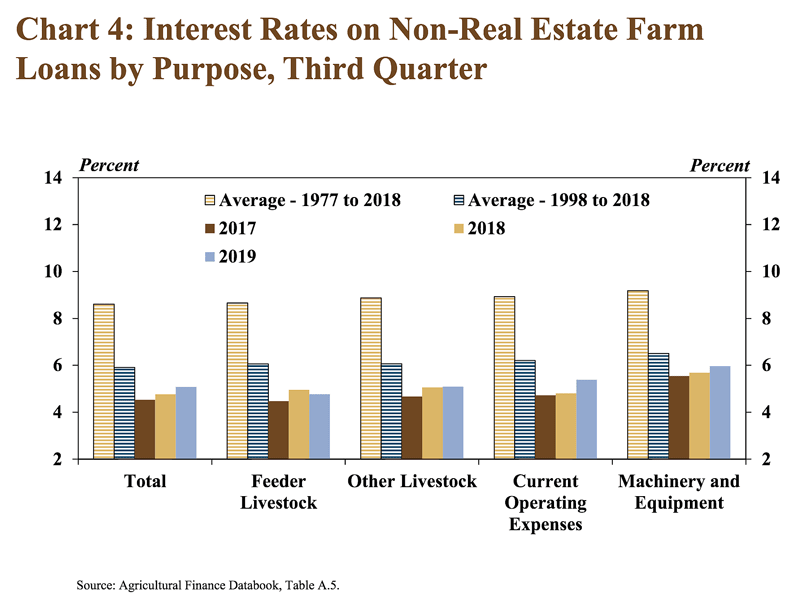 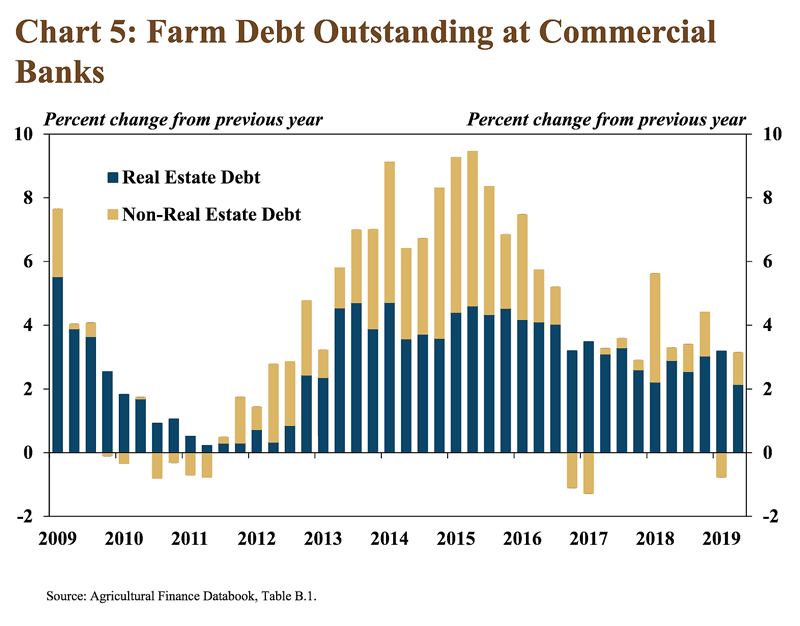 Farm sector debt continued to increase as liquidity in the sector generally has remained low. Debt-to-income ratios have declined slightly from historically high levels in 2016. However, in the third quarter, outstanding debt in the farm sector was more than twice as large as farm income and remained above a historical average (Chart 6). Although the USDA forecasted a slight increase in farm income in 2019, liquidity could remain weak, due, in part, to continued growth in farm debt. 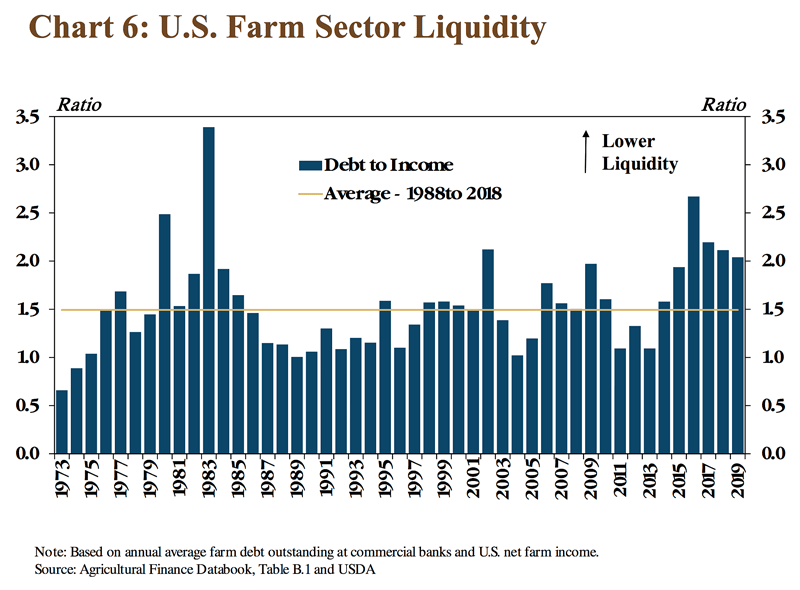 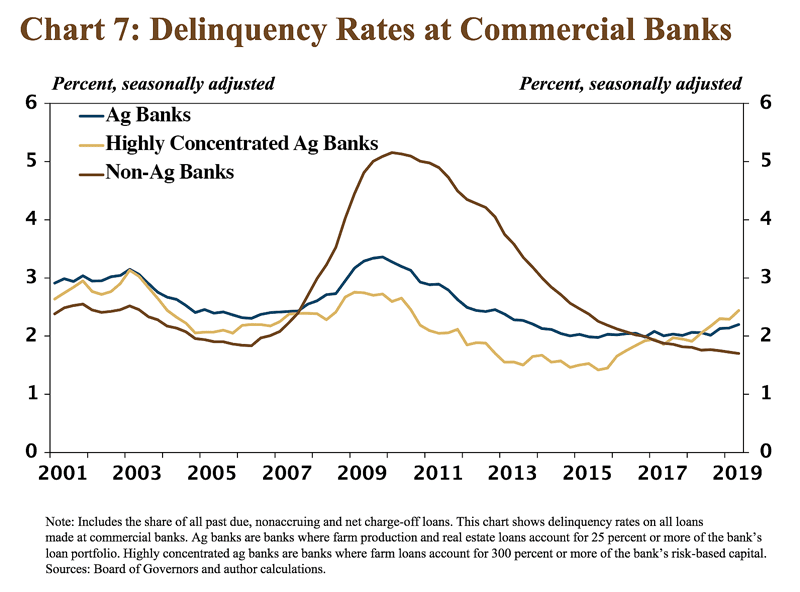 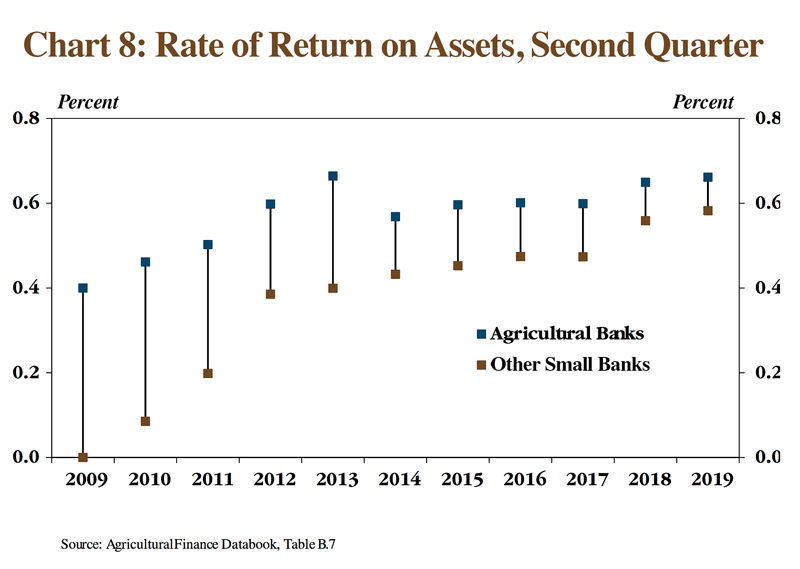 Similar to Call Report data, Regional Federal Reserve surveys also showed that demand for farm loans continued to trend higher in the second quarter. For the fifth year, a majority of bankers in several Districts reported that loan demand was higher than the previous year (Chart 9). The pace of growth in farm loan demand rose somewhat in the Kansas City District but declined in the Chicago and St. Louis Districts. In addition, respondents in the Chicago, Kansas City and St. Louis Districts expected growth in loan demand to slow in coming months. 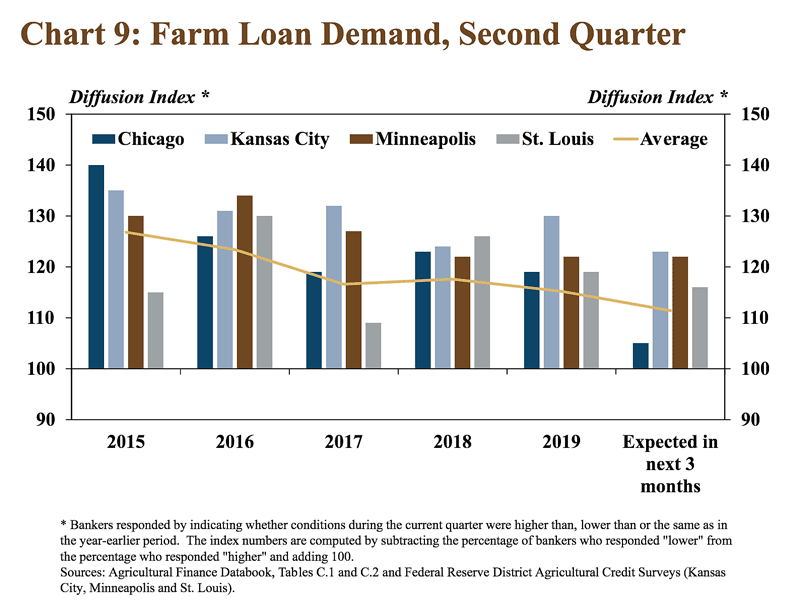 Alongside strong demand for farm loans, the rate of repayment on agricultural loans continued to decline at a modest pace. Farm loan repayment rates declined at a faster pace in the Minneapolis and St. Louis Districts in the second quarter of 2019 (Chart 10). In the Kansas City region, the rate of loan repayment continued to decline in 2019 but at a slower pace. Although a majority of bankers indicated they expect repayment rates on farm loans to continue to decline in the third quarter, the pace of decline was expected to be slower in all Districts. 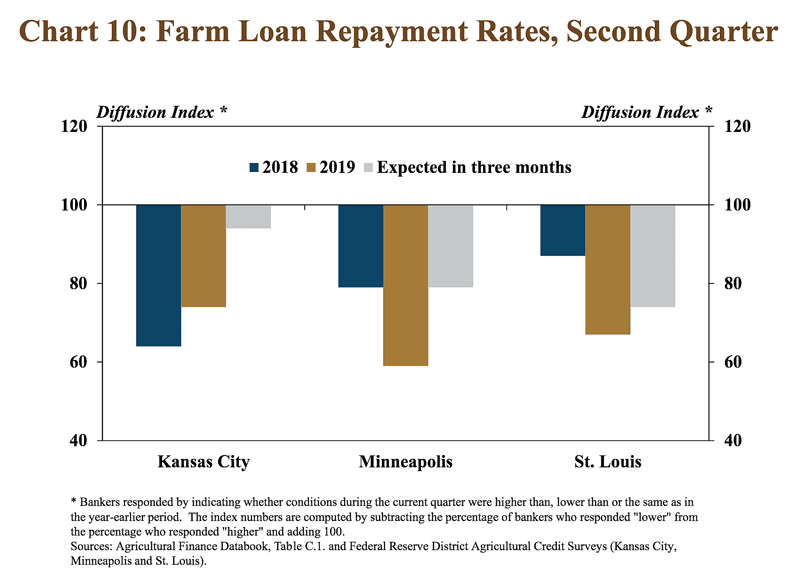 Abnormal weather conditions may have contributed to the outlook for weaker credit conditions in the second quarter. In many regions, agricultural borrowers were impacted by flooding or other extreme weather events during the first half of the year. Impacts appeared to be the most severe in the Chicago, Minneapolis and St. Louis Districts, where some form of extreme weather affected more than 50% of farm borrowers (Chart 11). The effects of weather in the first half of the year could continue to weigh on production prospects, yields and credit conditions throughout 2019. 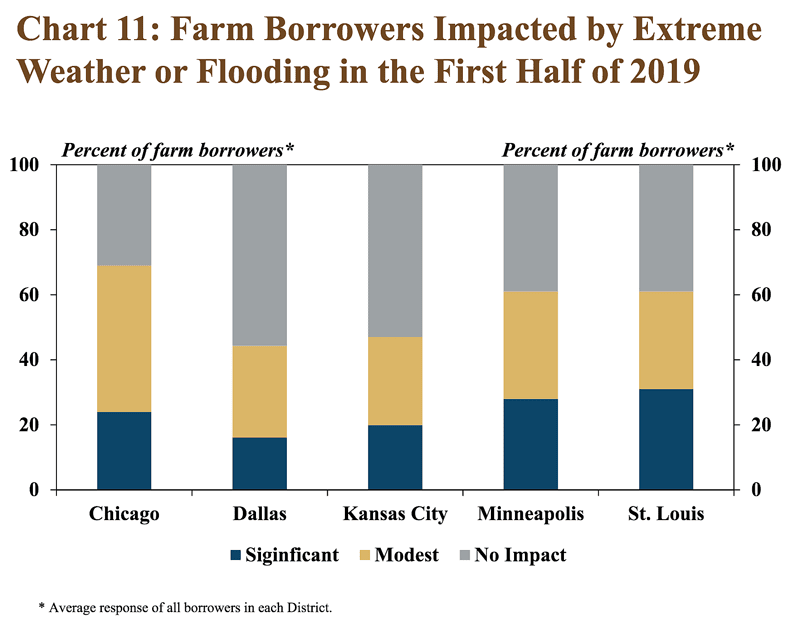 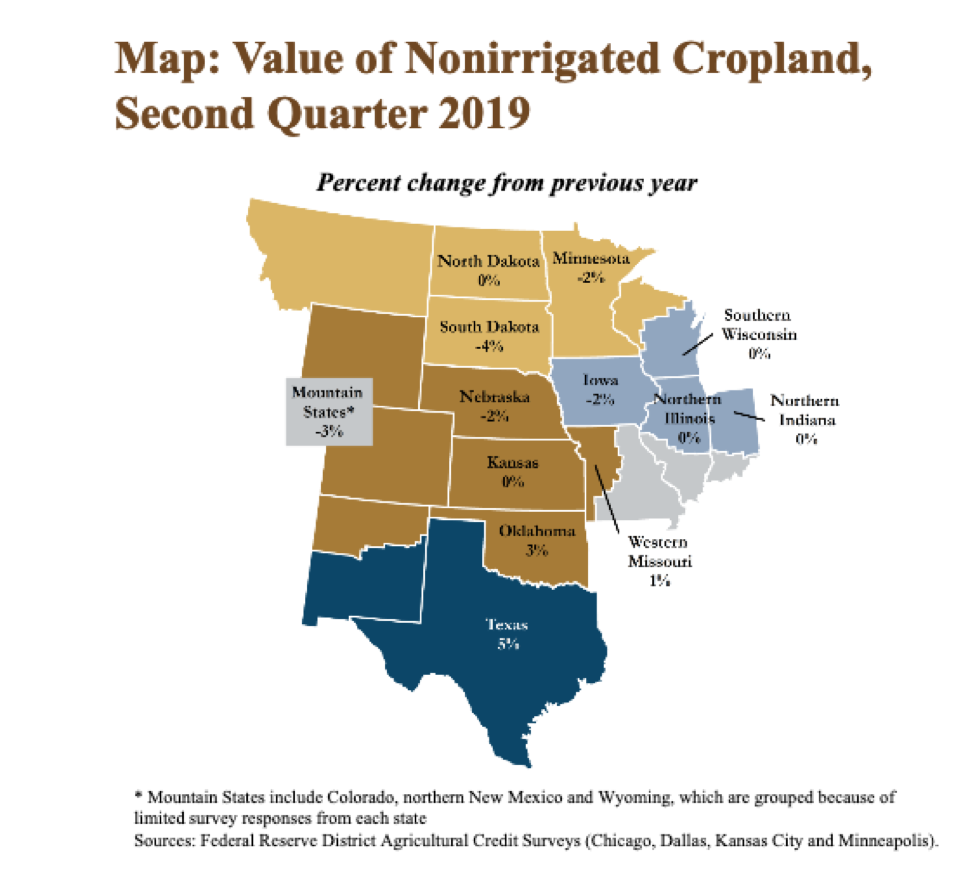 In this week's episode, we cover Titan Machinery's strong second quarter of fiscal year 2022, which saw revenues increase 24.4%. In the Technology Corner, Michaela Paukner shares a close look at 360 Yield Center's 360 RAIN autonomous irrigation system. Also in this episode, the Ag Economy Barometer shows farmer sentiment recovered slightly in August, Raven Industries' Senior Director of Global Sales Sarah Waltner shares some opportunities for the technology company after its acquisition by CNH Industrial closes. Finally, Ben Thorpe takes a look at the latest forecast for net cash farm income, which is estimated to be up 17% in 2021.
View More