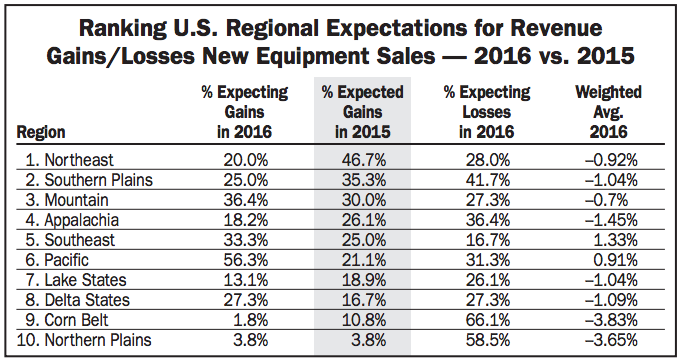 Of the 10 agricultural regions covered in Ag Equipment Intelligence’s 2016 Dealer Business Outlook & Trends report, dealers in only two are projecting a pick up in new equipment sales revenues.

Of the farm equipment dealers in the Southeast region of the U.S. who responded to this year’s survey, 33% expect an improvement in new equipment revenues in the year ahead. A little less than 17% of these dealers are forecasting a falloff in new equipment sales in 2016.

As a percentage, more dealers in the Pacific region (56%) of the country are expecting an improvement in new equipment revenues, but nearly one-third (31%) are anticipating that sales of new machinery will be lower in 2016 than they were in 2015.