In today’s newscast, we discuss what dealers can expect from the new leadership the Equipment Dealers Assn., farm equipment dealers’ revenue growth expectations for 2017, an update on dealer sentiment from Europe and an update on the right to repair battle.

On the Record is brought to you by Ingersoll.

Earlier this month, the Equipment Dealers Assn. announced Rick Lawhun would be retiring after just 3.5 years with the association. Kim Rominger will replace Lawhun as president and CEO, effective July 5. Rominger is no stranger to dealer association management, serving as the executive vice president and CEO of the United Equipment Dealers Assn. for the last 17 years, a role he will keep alongside his EDA responsibilities.

EDA, previously known as the North American Equipment Dealers Asnn., has gone through a number of changes in recent years, including a rebranding. The association also changed its structure from a federation of associations to a direct membership association in recent years. Rominger says the change in structure hurt EDA and he’s focused on rebuilding the bridge between EDA and the regional associations.

“I do want to work more collaboratively and collectively with the regional groups. I hope that if a dealer joins one, he will join both. That’s the goal because we all bring something to the table for the dealers, and we just need to find the mechanism and formula for that. I think that’s what is missing right now in regard to membership, so we are going to try to solve that problem. It’s going to take a lot of hard work and we’re going to have to build some alliances. It got fractured a little bit with the change in structure. One of my major roles is to go to my counterparts and see what we can do to work together.”

Rominger says about 85% of his time will be devoted to EDA while the other 15% is spent on UEDA.

It’s been a challenging few years for many precision farming dealers navigating the instability of the commodities market and cautious purchasing habits of customers.

But the results of this year’s recently published fifth annual Precision Farming Dealer benchmark study — with contributions from 120 farm equipment dealers, input retailers and independent precision companies — signal an optimistic shift in retailers’ revenue expectations and business objectives compared to recent years. Talking with dealers during the first part 2017, there seems to be more confidence and less concern about the current ag market.

Based on responses gathered during the first quarter of 2017 from 28 different states and Canada, 23% of dealers reported 2016 precision revenue growth of 8% or more, more than doubling their forecast of 10% from last year’s report. 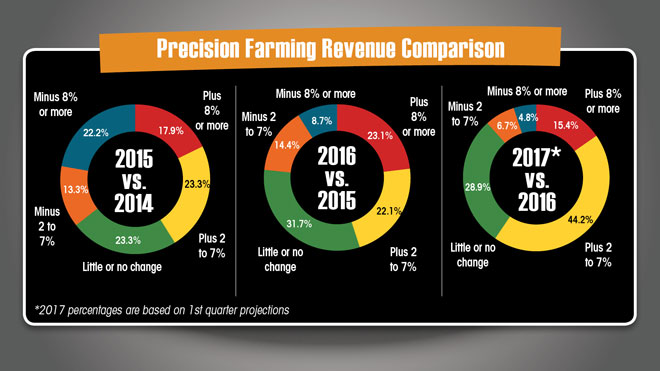 Fewer dealers are also anticipating measurable revenue declines in 2017. Only about 11% are forecasting a dip of 2% or more, by far the lowest total in the history of the study. And only about 4% of dealers are projecting revenue decreases of 8% or more.

Some 28% of dealers forecast little or no change in their precision revenue year-over-year.

CEMA, a European ag industry trade association, released its June Business Barometer Report on May 13. The general business climate index remained elevated in June, reaching its highest levels since 2012. According to CEMA’s survey of EU ag equipment dealers, 52% expect higher turnover in the next six months. This compares to 57% in the May survey and 53% in April. 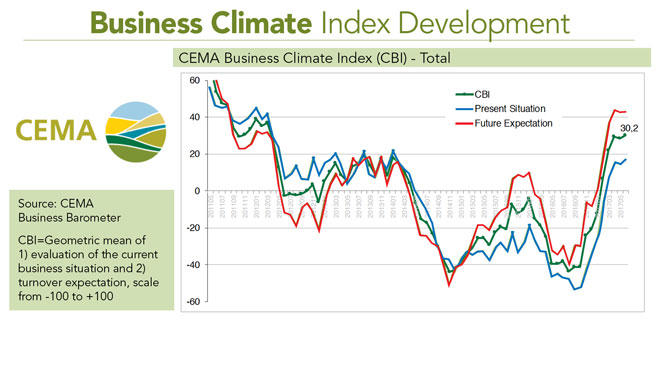 When it comes to dealer sentiment about the current situation, continued optimism prevailed, as 32% of dealers said their business is either good or very good while just 15% consider their business to be less than satisfactory. Both marks are slight improvements from the May survey. 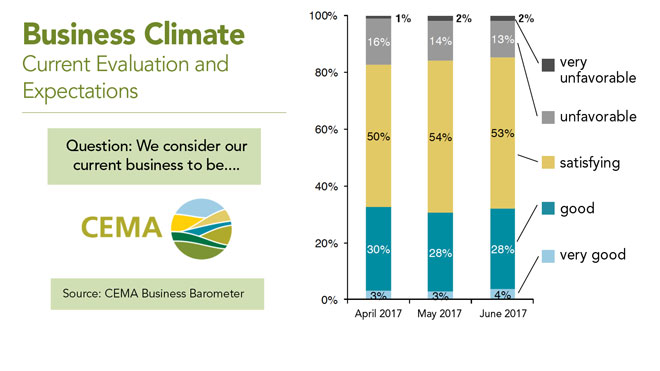 CEMA noted Spain as an outlier to the overall positive dealer sentiment, however, with recent weather conditions complicating business in the region. France, which boasts the largest ag equipment market in the EU, reported notable improvements in dealer sentiment, despite a majority of French companies calling the business environment “unfavorable” at the moment.

On a categorical basis, the current business environment highlights arable equipment as the industry leader, while livestock equipment finds itself on the opposite end of the spectrum. Future industry projections are most pessimistic toward municipal equipment and lawn garden sales, although both categories have maintained respectable trends up until this point.

The battle over Right to Repair legislation continues to be an issue across the U.S. This year, right to repair bills have been introduced in 11 states, according to a report by MapLight, including Kansas, Minnesota, New York, Tennessee, Massachusetts, Wyoming, Illinois, Iowa, Missouri, North Carolina and Nebraska.

According to the report, which was based on an analysis of state lobbying reports, companies opposed to the legislation spent more than $2.6 million in New York, Massachusetts and Nebraska. This includes the Iowa-Nebraska Equipment Dealers Assn., which spent $38,000 while lobbying against a 2015 right-to-repair bill. Meanwhile, the coalition that wants farmers to be able to fix their own tractors has spent $93,620.

In some late breaking news, we learned the U.S. Copyright Office released a report on Thursday that suggested the right to repair should be made legal permanently.

“The growing demand for relief under section 1201 has coincided with a general understanding that bona fide repair and maintenance activities are typically non-infringing.

“The Office recommends against limiting an exemption to specific technologies or devices, such as motor vehicles, as any statutory language would likely be soon outpaced by technology.” 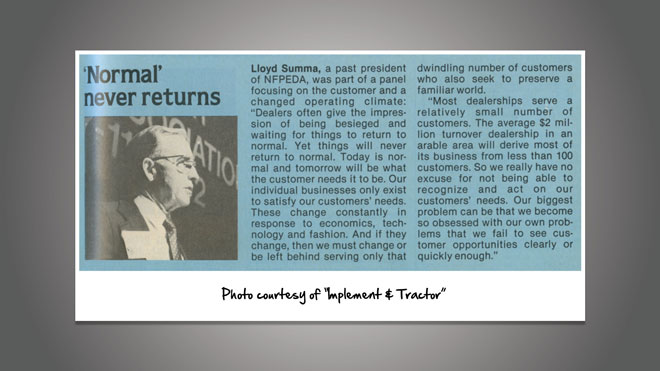 Following 30 months of business being down, dealers who gathered for the 1982 National Farm & Power Equipment Dealers Assn.’s annual convention in Honolulu tried to focus on the positive. During the convention, Lloyd Summa, then past president of NFPEDA, was part of a panel focused on the customer and changing operating climate. His words 35 years ago still hold true today. During the presentation he told dealers, “Dealers often give the impression of being besieged and waiting for things to return to normal. Yet things will never return to normal. Today is normal and tomorrow will be what the customer needs it to be. Our individual businesses only exist to satisfy our customers’ needs. These change constantly in response to economics, technology and fashion. And if they change, then we must change or be left behind serving only that dwindling number of customers who also seek to preserve a familiar world.” He goes on to say that dealers’ “biggest problem can be that we become so obsessed with our own problems that we fail to see customer opportunities clearly or quickly enough.”