In today’s newscast, we discuss what sort of impact the China opening its doors to U.S. beef will have on dealers and manufacturers, the digital ag evolution, on update on dealers’ used equipment inventories, and the latest earnings reports for Titan Machinery, John Deere and Raven Industries.

Earlier this month the U.S. and China agreed to open the doors for U.S. exports of beef to China no later than July 16. The nearly 1.4 billion consumers in China equates to a $2.5 billion market, says Glen Parrett, director of sales and marketing for Art’s Way.

Parrett says, “This is a big deal. The Chinese appetite for beef is huge and growing and this will bode well for the U.S. beef producer as it will open a revenue stream that we haven’t realized for some time.”

While he’s not sure to what degree this will impact Art’s Way’s product line, he says it won’t take long to measure the impact with exports starting by mid-July.

He says, “A windfall like this will more than likely give way to the larger feedlot producer, but I believe smaller herd operations will see some advantages too, which will benefit our line of portable grinder mixers, manure spreaders and forage products.”

That said, Kate Brooks, professor of ag economics at the University of Nebraska-Lincoln is quoted in the Omaha World-Herald saying it could take years for the U.S. to realize China’s market potential. She goes on to say that exports in the short-term may be limited by restrictions to U.S. beef, including traceability and any restrictions on the use of hormones.

I spoke with Ben Bair, remarketing manager for John Deere dealer 21st Century Equipment, to find out how his customers were reacting to the news. With locations in Nebraska, Colorado and Wyoming, Bair says most of their customers touch the cattle industry in some way. And while customers welcomed the news, he says they are currently more concerned with the tainted meat scandal in Brazil. From what he’s heard from customers, Brazil’s problems could have a bigger impact than the China deal.

When it comes to equipment sales, he doesn’t anticipate a significant increase.

“There’s probably going to be an uptick in some of that if we do start exporting beef to China, but for us at 21st Century Equipment I don’t anticipate much of a change. If the cattle deal gets better we might sell a few more utility tractors or a round baler or two or something like that. But they need such little amount of equipment in relation to what a corn farmer or vegetable farmer or grain farmer, that it doesn’t have a real big effect on our business.”

This week’s Dealer on the Move is RDO Equipment. The 75-store John Deere dealership has partnered with Andrew Mower, an entrepreneur in Zambia, to open RDO Equipment Africa. With a store in Kabwe, the capital of the Zambian Central Province, the dealership will offer pre-owned John Deere ag and construction equipment, as well as products from Crary, Equalizer, Wilrich and Wishek.

With the rapid evolution of technology, it’s not always easy for precision dealers to catch their breath. However, a time may be coming when the precision industry takes stock of where it is and where it needs to go.

A new report, Bungle in the Ag Tech Jungle – Cracking the Code on Precision Farming and Digital Agriculture, from the RaboResearch Food and Ag Group dissects the obstacles and opportunities ahead for the fourth wave of precision farming —digital ag.

Report author Kenneth Zuckerberg, RaboResearch F&A Farm Input senior analyst, foresees a “day of reckoning” where standardization and streamlining will reshape and define digital agriculture. One of the major adoption hurdles is the variety of platforms and operating systems different companies use, which Zuckerberg says can create confusion for end users.

But there is a successful, profitable business model precision farming can emulate — software for free, premium support for a fee. Zuckerberg points to Google and Facebook as free digital platforms that were launched, promoted and allow users to experiment and customize their experience.

Providing a low-risk entry point into data-driven precision platforms could increase willingness by customers to test the digital ag waters.

“I think the path forward is probably giving away the software and then selling will be in the form of higher value-add analytics, insights and actionable recommendations. So, obviously what I’m saying to you probably does not help companies that are trying to raise money selling software. But if you look at the customer and then look at Facebook and Google and say, ‘Wow, those are multi-billion dollar companies that followed a very respectful approach to the consumer,’ I think there’s something there. So I fully expect a reset to happen among digital ag companies, with this view toward make it free, make it available, make it easy to understand and make it open.”

You can hear more from Zuckerberg discussing the new report, including the influx of venture capital money in precision farming, in the latest episode of Precision Farming Dealer’s podcast series. 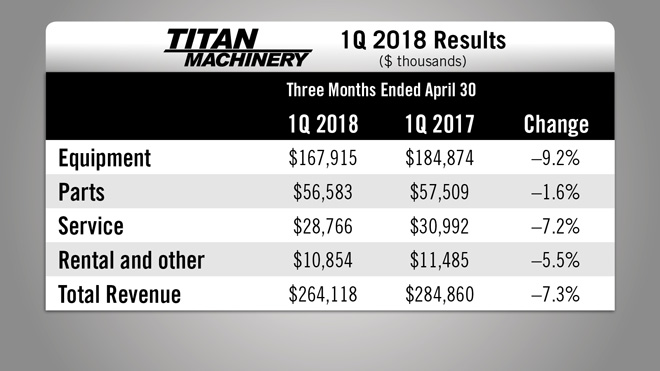 Titan Machinery, Case IH’s largest North American dealer, reported its fiscal year 2018 first quarter results on May 25. Revenue for the quarter was $264.1 million, down 7.3% vs. the first quarter of fiscal 2017. 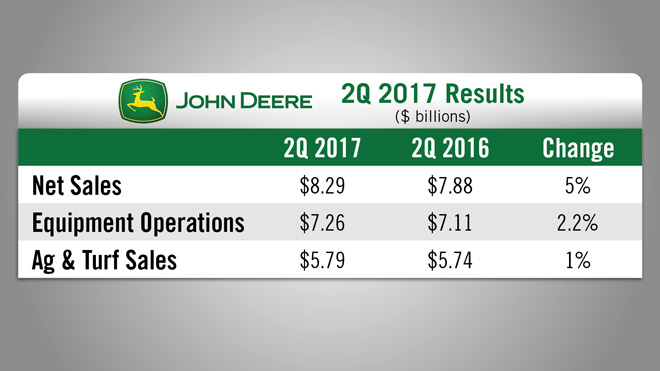 John Deere released its second quarter earnings on May 19. Worldwide net sales increased 5% to $8.29 billion. For the first 6 months of the year, net sales are up 4%. Equipment operations accounted for $7.26 billion in net sales, up 2.2% vs. the second quarter of last year.

Agriculture & Turf sales for the quarter were $5.79 billion, up 1% vs. the second quarter last year.

Looking ahead, Deere increased its outlook for 2017 worldwide equipment sales to up 9%. Previously, management had forecast sales to be up 5%. Commenting on Deere’s outlook for the rest of the year, Mig Dobre, analyst with Baird Equity Research says, management is being conservative in their forecast.

However, for the U.S. and Canada, Deere is forecasting ag and turf sales to be down about 5%. 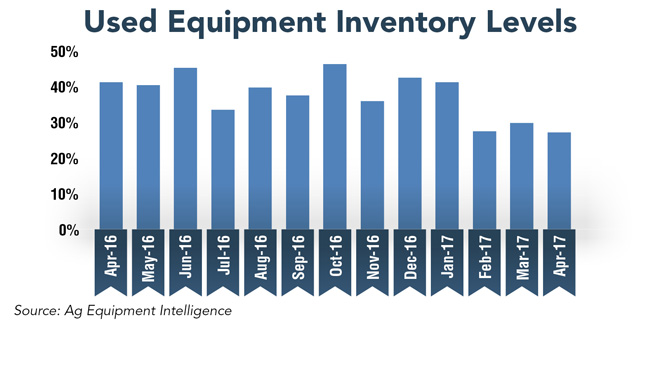 While there are certainly too many used units still on dealers’ lots, our latest Dealer Sentiments & Business Conditions survey shows levels have come down since this time last year.

One dealer commented saying, “We are turning our used equipment very aggressively but still have some older aged used we must flush out of our system. Our turn has steadily increased over the past 36 months.” 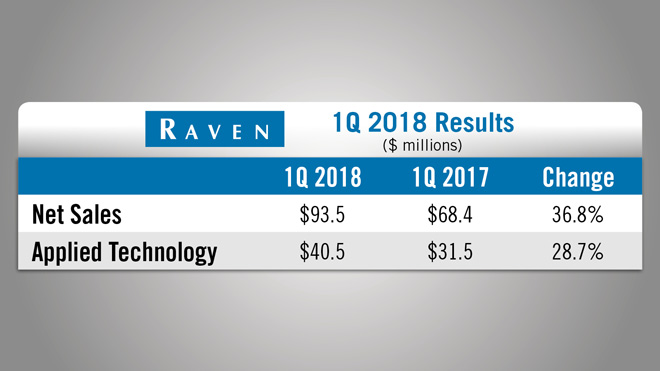 Raven Industries reported its first quarter results on May 22. Net sales for the quarter of fiscal 2018 were up 36.8% at $93.5 million. All divisions reported growth of 20% or more year-over-year.

Net sales for the Applied Technology division, which includes Raven’s ag products, were $40.5 million, an increase of 28.7%. Much like the second half of 2017, the company says sales growth for Applied Technology was driven by new product sales, expanded OEM relationships and higher sales of direct injection systems. 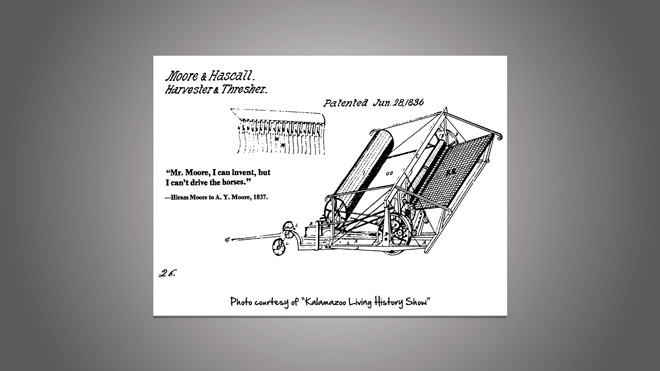 In 1838, Hiram Moore built the first practical combine in the U.S. His combine worked fairly well when crop conditions were right, but that was seldom the case in his home of Michigan where it was often damp come harvest time. But, it proved to work perfectly in the dry climate in California. One of Moore’s combines was used to custom harvest about 600 acres of wheat for three California farmers. It proved to work well in the conditions, but the farmers never paid for the work. The combine was used again two years later, but an inexperienced crew failed to lubricate a bearing and the machine caught fire and burned.