In today’s newscast, we look at the impact the 25% tariff on steel may have on the U.S. ag economy, the adoption of precision technologies oversees, year end results for Rocky Mountain Dealerships and Cervus Equipment and Dana Inc.’s purchase of GKN.

President Donald Trump made waves in the ag equipment industry earlier this month when he announced tariffs on steel and aluminum imports in an effort to jump start U.S. industry and protect national security. The tariffs are set to take effect March 23.

A lot of the talk since the news on the tariff broke on March 2 was that Trump was aiming the tariff at China. A Reuters report says China accounts for just 2% of U.S. steel imports, and it doesn’t even make the list for top 10 sources for imported steel. 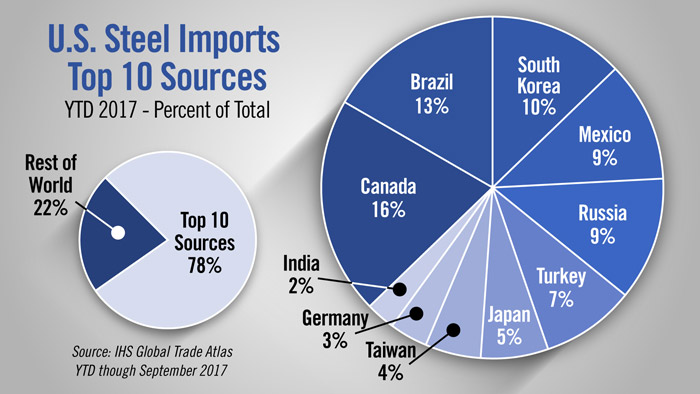 According to Slater, the price of steel has already risen in anticipation of the administration’s actions, and a 25% tariff will only further erode the progress manufacturers have made over the past year, he says.

Many in the ag industry fear retaliatory tariffs being placed on U.S. ag exports, particularly soybeans. The American Soybean Assn. (ASA) says retaliation by China could be devastating to U.S soy growers.

Dr. Jason Grant, associate professor with Virginia Tech’s Dept. of Agricultural and Applied Economics, says there are a number of U.S. products other countries have suggested they’d impose a retaliatory tariff on.

“Retaliation from China would add significant injury to an already hobbled farm economy. Prices are down 40% and farm income is down 50%, and we simply can’t afford for those numbers to get worse,” the ASA says.

Dr. Grant agrees and notes that the U.S. exports $14 billion in soybeans to China annually.

China buys 100 million tons of soybeans annually, which represents about 60% of the global trade, according to a report in the Wall Street Journal. Of that, roughly 30 million tons come from the U.S.

This week’s Dealers on the Move include H&R Agri-Power and Miller Implement.

Technology adoption among farmers can be influenced by supply and demand for certain precision systems. While there are other variables farmers consider prior to purchasing hardware, there are general precision practices that apply to the majority of North American farms, including auto-steer systems and GPS guidance.

But buying decisions and objectives with precision technology can be dramatically different overseas. Brian Goggin spent 26 years with the USDA’s Foreign Agricultural Service including 5 years in the southeast Balkan states, where he helped introduce and advance conservation tillage practices and soil health principles into the region.

Since retiring from the USDA in 2015, Goggin had headed up a grant-funded project to further educate and implement conservation practices onto large-scale farms in Bulgaria, some operations as large as 200,000 acres.

Adoption of guidance tools and variable-rate practices is checkered in the region, and Goggin says the primary precision objective for many farmers he works with is for security purposes.

“It’s not widespread, but all of these large farms, they have some element of precision. Telematic mostly, to guide the tractors. These farms are large and of course and families are involved, but they have to depend on hard labor. It’s almost as if they use their precision for some might say security purposes, to keep an eye on folks. Farmers sit down at their desks and there’s just an array of video being taken.”

Goggin adds that recording data and video is almost standard operating procedure to ensure safety and quality standards on large scale operations, although one of the ongoing hurdles to increasing broader adoption of technology, is training. 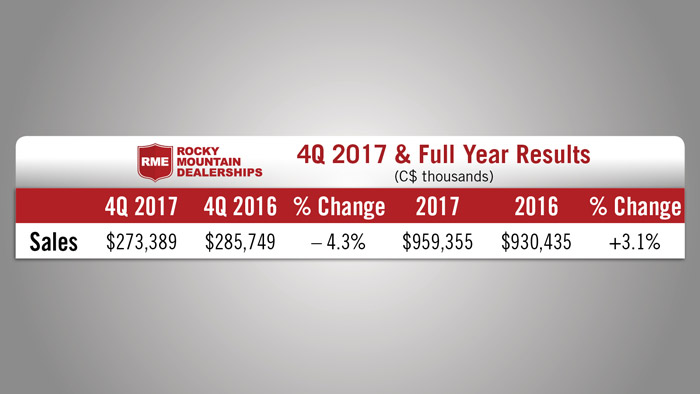 For the full year, total sales increased 3.1% for $959.4 million compared to 2016. According to the dealership, despite flat sales growth over the last 5 years, streamlined costs and stronger margins have driven earnings growth. 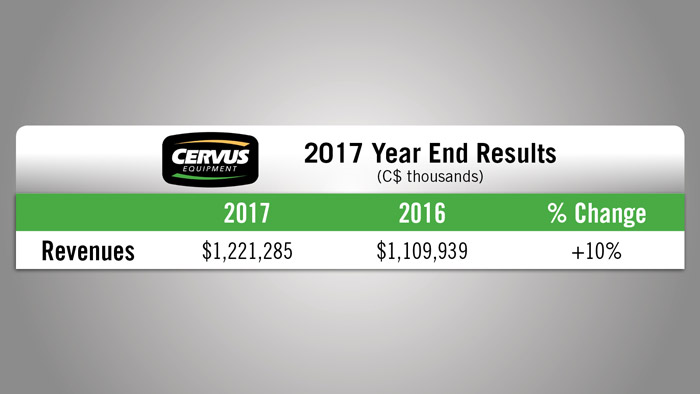 President and CEO Graham Drake said the results were due to strength in the dealership’s ag segment and record new equipment sales in 2017.

The off-highway powertrain activities of the U.K.’s GKN engineering group, along with its GKN Driveline automotive business unit, are to be combined with Dana Inc. in a new entity.

With pro forma sales of approximately $13.4 billion in 2017, the company will be the global leader in vehicle drive systems across all three major mobility markets — light vehicle, commercial vehicle and off-highway. Under the Dana deal, the new entity will be called Dana PLC. 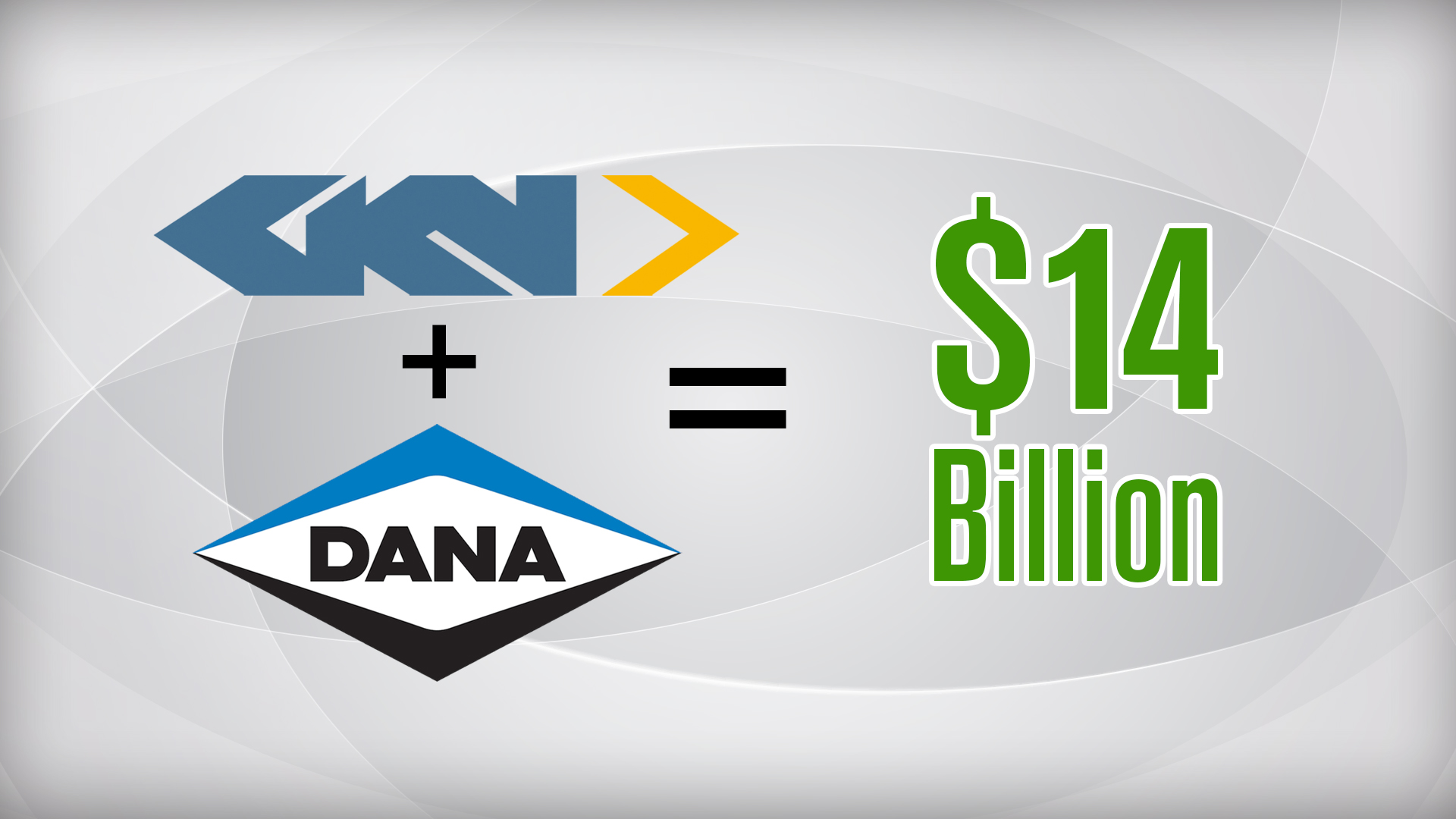 The transaction arises from a hostile take-over bid for GKN plc from a U.K.-based business re-structuring specialist, which the Wall Street Journal report called “a nasty battle for the British parts maker,” as the proposed takeover pits Dana against a bid from turnaround specialist Melrose Industries, which wants all of GKN in a hostile offer of $10.25 billion.

In response to the Melrose takeover, GKN managers decided to raise cash selling off business areas identified as being non-core and floated the prospect of separating its automotive and aerospace activities. Off-highway has been a declining sector for GKN as other parts of the business — notably aerospace — have grown. In 2016, the group disbanded its GKN Land Systems division in a $19.5 million restructuring.

The new venture is expected to pull in $14 billion in annual revenue, with customers ranging from General Motors Co. to agricultural equipment maker Deere & Co. Truck makers, including Pacaar and Volvo, are also customers.

This year marks 100 years since John Deere introduced the Waterloo Boy, which used a two-cylinder concept, replacing steam-powered tractors and shaped the next 40 years of tractor development

[Podcast] Steel Tariff Could be 'Devastating' to U.S. Ag

Could 3-D Printing Be Coming to a Dealership Near You?