In today’s newscast, we examine Ag-Pro Companies latest acquisitions and changes to the “Big Dealer” list, how off-lease equipment are impacting the used equipment market, electric-based systems for ag equipment, and the latest earnings reports from AGCO, CNH Industrial and Art’s Way.

Ag-Pro Companies, a John Deere dealer group that serves the southeast completed its acquisition of 9 Deere stores in northern Alabama and northern Georgia. The acquisition brings Ag-Pro’s total locations to 47, making it the largest ag equipment dealer for John Deere in North America, according to Ag Equipment Intelligence’s Big Dealer Report. It is now larger than Cervus Equipment, which has 42 ag stores. 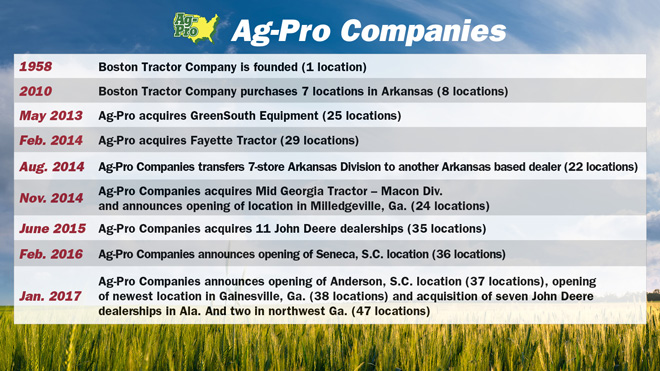 Seven of the new stores, previously operated as Snead Ag, were located in Centre, Fort Payne, Gadsden, Oxford and Snead, Ala., and Cartersville and Jasper, Ga. In addition, Ag-Pro has also acquired 2 other stores in Guntersville and Piedmont, Ala., and opened its newest location in Gainesville, Ga.

Ag-Pro got its start as a single-store John Deere dealership in Boston, Ga., in 1958. It had made 3 single location acquisitions up until 2010 when the dealership had its first large acquisition. At that time it acquired 7 stores in Arkansas that were previously known as Agricultural Productivity Companies.

The dealership group grew to 25 stores in 2013 and has steadily been growing through acquisition and new store openings since then.

Ag-Pro moved up to the number 3 spot on the Big Dealer List from number 8 in 2016, and this will bump them up to number 2. Case IH dealer Titan Machinery is the largest dealer in North America with 80 ag stores, however yesterday the dealership group announced a restructuring plan that includes closing 14 ag stores. We’ll have more on Titan’s plan in our next episode

The 2017 Big Dealer Report is currently being compiled and will be released in April.

Other Dealers on the Move this week include LandPro Equipment, Henderson Implement, 4Rivers Equipment and Crown Power & Equipment.

Lakeland Equipment and Z&M Ag and Turf, Western New York’s two John Deere dealers, announced a new partnership with Argonne Capital Group. The two dealer groups will merge their assets into a new company called LandPro Equipment LLC that is backed by Argonne and existing shareholders of Lakeland and Z&M. The dealership group has 12 locations, making it the largest John Deere dealer in the northeastern U.S.

4Rivers Equipment, a 16-store John Deere dealership, recently completed the expansion of the service shop at its Fort Collins, Colo., store. The dealership group has stores throughout Colorado, New Mexico, Texas and Wyoming.

Now Here’s Jack Zemlicka with the latest from the Technology Corner.

Is Electric the Gateway to Autonomous Vehicles?

Fully autonomous vehicles in agriculture are likely still several years away, but there also may be a simpler, more efficient pathway to extending the life of farm machinery, while also improving performance.

Electric-based systems are one of the alternatives being pursued by engineers to improve fuel economy, while reducing repair costs. At last month’s Precision Farming Dealer Summit in St. Louis, Kraig Schulz, president of the Autonomous Tractor Corp., broke down the benefits of a “Tesla for tractors” model in the ag industry vs. a transition to fully autonomous vehicles.

One of his key takeaways was that electric motors improve tractor durability and retention of value because they can last longer and require less maintenance.

“If you go to the (U.S.) Department of Energy and you look at their expected lifespans for large motors greater than 100 horsepower, the average expected lifespan for an electric motor is 29 years — 200,000 hours of use — 10 times what you’d get out of a traditional tractor. That’s pretty shocking and that’s part of the reason, not the only reason, but part of the reason why you see Teslas retaining way more than half their value even after roughly half of their expected lifespan. This would certainly help with the cost side for the farmers if their equipment lasted for 25 years and didn’t need the repairs. Some of those costs that they’re facing would go down and start to help with that price vs. costs calculus that they have to do.”

While electric-based systems may be a more practical avenue to semi-autonomy, Schulz notes that the path isn’t without its obstacles. The biggest challenge being the need to reduce the cost of lithium ion batteries to run a high-horsepower tractor. Current estimates project a battery with 1,500 kilowatt hours would cost upwards of $350,000.

In our last episode, we discussed Machinery Pete’s fourth quarter Used Values Index and the surprisingly strong prices for used planters and combines in November and December.

During a presentation at the Precision Farming Dealer Summit, Greg Peterson, discussed 6 trends he’s seeing in the used equipment market right now. In addition to the strong prices at the end of 2016, he listed the following trends:

We asked Peterson what impact the influx of off-lease equipment entering the market could have on farm equipment dealers. 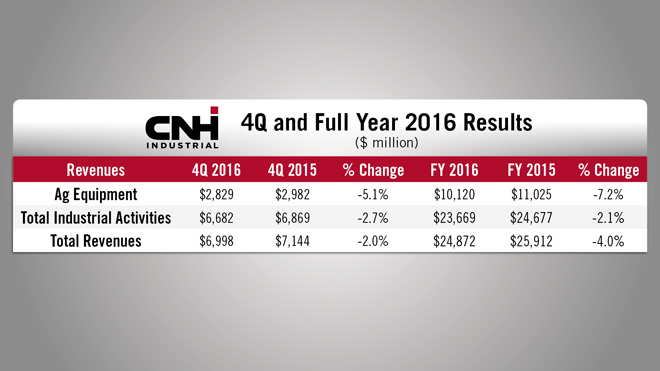 The company said the decline in ag equipment sales is a result of unfavorable industry volume and product mix in the row-crop sector in NAFTA and in the small grain sector in Europe, the Middle East and Africa.

He said, “While the Agricultural Equipment market remained at historically low demand levels in 2016, our margin performance was in line with our expectations and we made significant progress on further reducing channel inventory.”

To improve in 2017, CNH will be doing several restructuring actions as part of its Efficiency Program. The program will result in saving approximately $60 million in 2017. The company also hopes to become more balanced in the agricultural equipment division, improving fixed cost absorption and getting a positive impact from LATAM end-user demand. 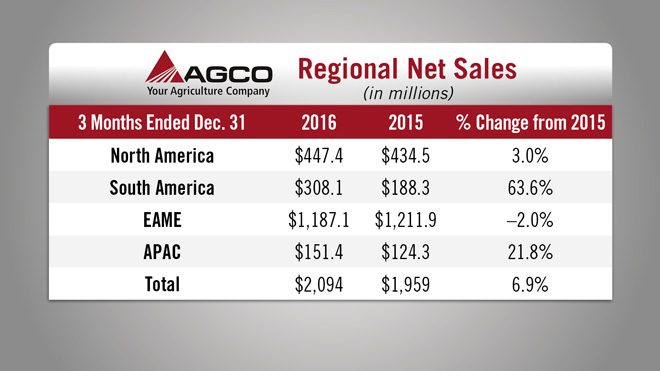 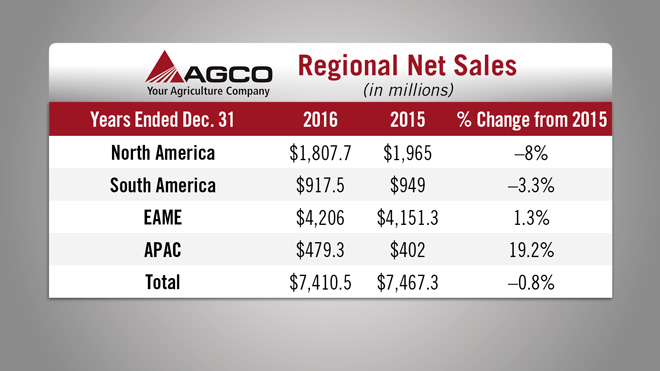 On a regional basis, South America saw the largest increase in net sales for the fourth quarter at up 63.6%, followed by APAC at up 21.8%. North American sales were up 3%, and the only region experiencing a loss was Europe, the Middle East and Africa at down 2%.

AGCO’s outlook for 2017 calls for flat sales compared to 2016, with softer end-market demand in both North America and Western Europe. 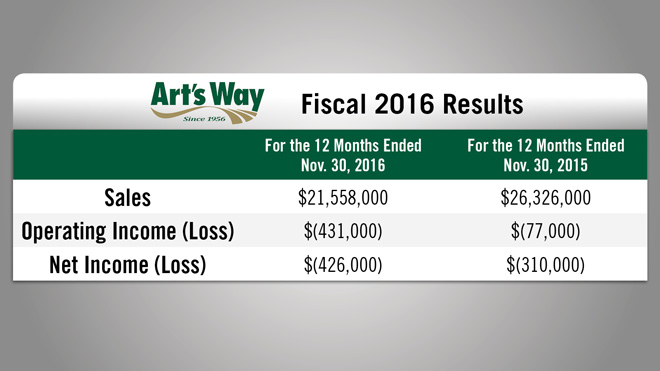 On Feb.1, Art’s Way Manufacturing Co, a diversified, manufacturer and distributor of farm equipment, also released its fiscal revenue totals for 2016, which saw declines in several areas of the business.

Chairman of the Board of Directors, Marc McConnell said, “low demand in fall resulted in very low shipments for October and November, particularly, that could not be overcome by adjustments in our cost structure.”

He said the company will continue reducing inventory and improving their purchasing to improve the overall operation.

Art’s Way remains optimistic for 2017 despite the difficulties this year.

McConnell said, “While our fourth quarter and full fiscal year brought great challenges, we are pleased to report that we have seen an improvement in demand since fiscal year end in all business segments, resulting in a significantly increased backlog that we anticipate will drive improving performance in fiscal 2017.” 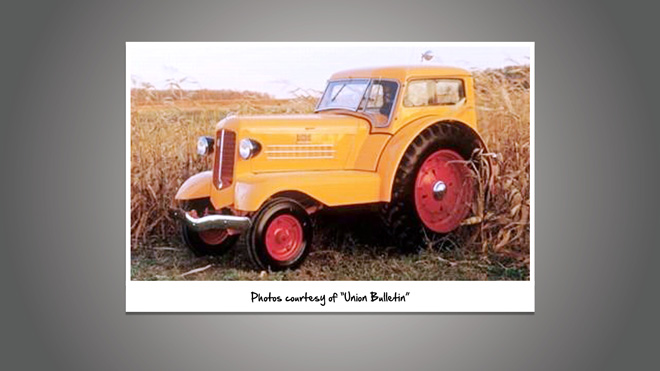 Manufacturers are always looking for ways to increase comfort in their machinery — this includes the tractor industry. As the Union Bulletin reports, “challenging weather conditions and convenience appear to have inspired inventors to develop a tractor that could go from the field straight into town.” Minneapolis-Moline met these two qualifications with their 1938 Comfortractor. The modern tractor combined utility with comfort in its bright yellow cab design. Its sales, however, were not successful. It sold for $1,900 in 1938 when in comparison a John Deere was priced at $1,000 and a Ford sedan $725. Some say the price resulted in the dismal sales while others say it was a tractor 20 years ahead of its time.

As always, we welcome your feedback. You can send comments and story suggestions to kschmidt@lessitermedia.com. The Ag Equipment Intelligence team will be traveling to Louisville next week for the National Farm Machinery Show, and we’ll have coverage from the show next time. Thanks for watching, I’ll see you next time.

[Podcast] Ag-Pro Companies Moves Up to No. 2 on Big Dealer List