In today’s newscast, we report on CNH Industrial’s purchase of the Soil & Grass line of Kongskilde, the latest Ag Economy Barometer reading from Purdue University and the Center for Commercial Agriculture, dealers’ precision hiring plans for 2017 and the third quarter earnings reports for CNH Industrial and Trimble.

A Danish farmer cooperative’s patriotic experiment with ownership of a machinery manufacturing enterprise is drawing to a close with the sale of a chunk of assets to CNH Industrial.

Managers at the DLG cooperative have been trying to turnaround Kongskilde Industries since acquiring the business in 2007 but concluded last year that it was best prepared for a sale to a buyer focused on farm machinery as its core business.

CNH Industries and its New Holland Agriculture division have emerged as the buyer with the announcement on Monday this week that they had agreed to purchase Kongskilde’s Soil and Grass divisions.

The group’s grain handling and industrial equipment divisions are not part of the deal, but the package does include all tillage and hay tool products, related brands and production plants in Europe and North America.

These include the newly expanded facility in Hudson, Illinois that produces tillage and fertilizer placement equipment and is Kongskilde’s North American base.

While emphasizing that the current dealer and importer network remains unchanged for now, Lambro said the agreement will provide growth opportunities and create a strong platform to develop the Kongskilde business and its brands as the products are gradually integrated into the New Holland portfolio.

“New Holland has been tracking our used sales and our new sales of tillage and they’re just noticing they had a void there and they’re asking to help us sell more product … I’ve been watching the Kongskilde line. They haven’t been in my dealership to be a dealer for them but they make a product that competes with Kuhn Krause. Kuhn Krause calls it the Excelerator. They have a VT tool that looks very good.”

For the Danish cooperative, the deal removes a business that accounted for less than 1.5% of turnover but impacted on group profits and occupied a lot of management time.

For New Holland, it realizes an ambition to become a true full-liner having been outbid by Kubota in 2012 for the Kverneland Group, which would have provided a similar range of products.

This weeks Dealers on the Move are Sunshine Equipment and Quality Equipment. The two Louisiana-based John Deere dealers merged to form Sunshine Quality Solutions. The combined dealership has 15 locations throughout southern Louisiana.

For the third year in a row, U.S. dealers are forecasting fewer additions to their precision farming departments, according to Ag Equipment Intelligence’s 2017 Dealer Business Outlook & Trends report.

The report, which tracks hiring and revenue projections for the coming year, reveals that only about 10% of U.S. dealers plan to add precision staff in 2017. This continues a gradual 13% decline during the last 3 years.

Independent dealers are the least optimistic group according to the report, with none planning to add staff in 2017 and more than 16% anticipating a reduction or relocation of precision specialists — up nearly 12% over this year.

Among the major manufacturers, Kubota dealers forecast the biggest drop in additional precision hires, going from 23% who planned to hire precision specialists this year to zero in 2017, according to the report, followed by John Deere, with about a 6% year-over-year decline.

But there is positive hiring news as well, with both Case IH and New Holland dealers are forecasting increases. Some 13% of New Holland dealers project adding precision specialists in 2017, more than double the percentage this year. About 16% of Case IH dealers are also forecasting hiring growth in the coming year, compared to just over 11% in 2016. 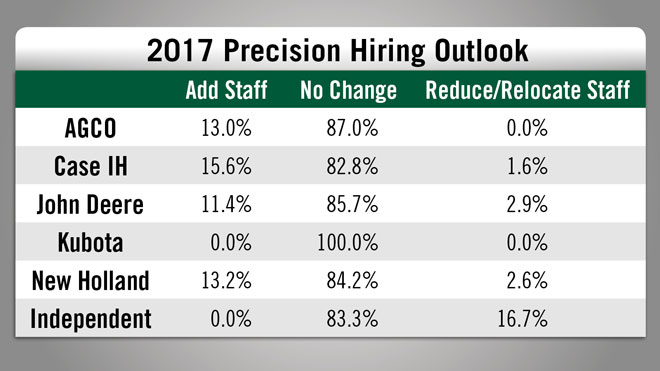 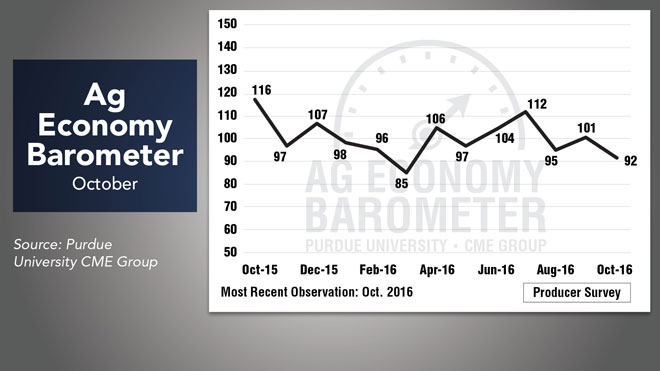 The report authors say the decline in producer sentiment was largely driven by “an erosion in producers’ perspective regarding the long-run health of the U.S. agricultural economy.” The Index of Future Expectations dropped to 95 in October vs. the 109 reading in September and well below the peak reading of 121 in July. 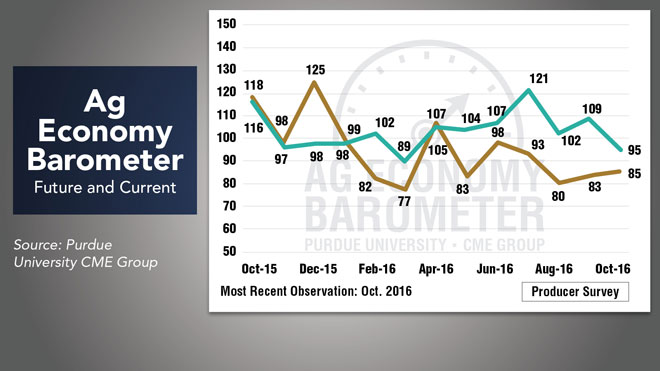 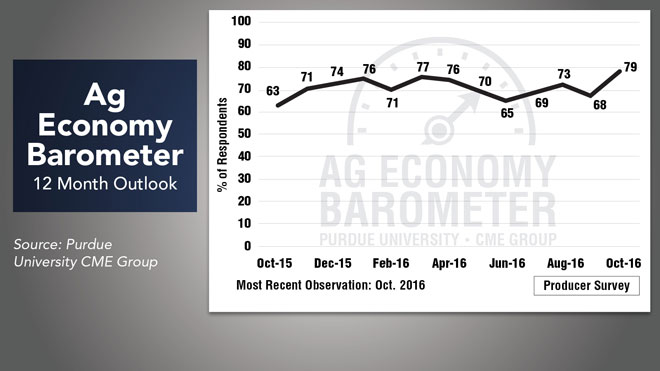 The authors say the change in perspective from October 2015 to this October suggests farm financial conditions have weakened considerably since last fall.

On Oct. 31, CNH Industrial reported its total third quarter revenues were down 1.7%. Net sales from ag equipment during the quarter came in at $2.4 billion, down 3% compared to the third quarter of 2015. 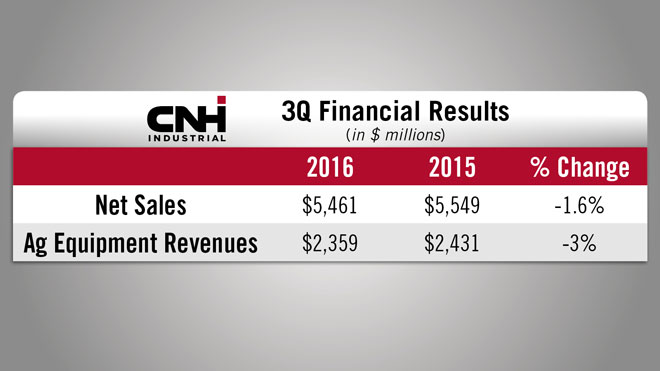 On Nov. 1, Trimble Navigation reported its third quarter revenues were up 4% over 2015. Revenues from the Field Solutions segments, which includes its precision farming products, were up 6% at about $78 million compared to $74 million for the same period last year. 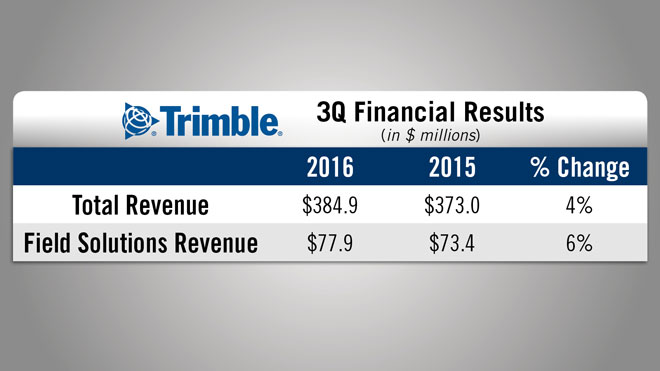 Trimble president and CEO Steve Bergulund noted that last quarter the Field Solutions division had a flat year-to-year revenue performance after nine quarters of declines. This quarter marked the first revenue increase in 11 quarters, he says and adds “Although there was some acquisition contribution, the core agriculture business increased and compensated for a decline in the GIS business.

Looking for a way to reduce the painstaking time that came with detasseling, Ray Hagie developed a self-propelled “personnel mover” in 1946. Greatly improving efficiency, the product created high demand. At the end of World War II, following Dow’s release of the pesticide/herbicide, commonly know as 2,4-D today, to control broadleaf weeds, Hagie got back to work to develop an even more efficient solution for application of the product. In 1947, he invented the world’s first self-propelled sprayer. 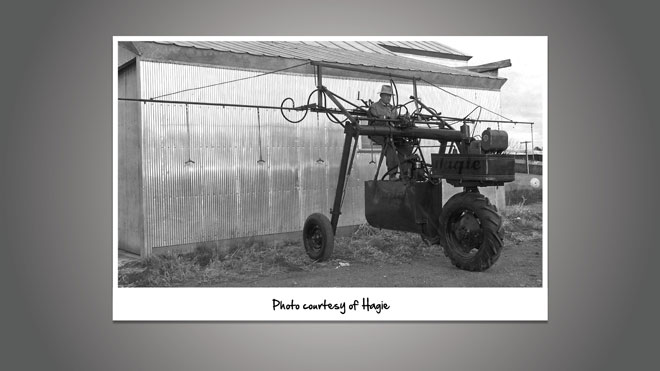