Planning for Profits — Dealer Consolidation: A Year of Changes

The next two parts of our "Planning for Profits" series follow up a column we presented a year ago on the “Challenges & Opportunities of Expansion” (Farm Equipment, April/May 2009, p. 46-47).

New Feature: "Dealers on the Move"

With the high level of interest expressed by readers, beginning with the next issue Farm Equipment and Currie Management Consultants will provide an ongoing summary of changes with North American ag equipment dealerships. “Dealers on the Move” will be presented in the news section in each issue.

We encourage dealers and others to contact us with news of mergers, acquisitions, new store openings, new brands, etc. This regular feature as well as the entire list of large farm equipment dealers will also be available on the web sites of Farm Equipment and Currie Management Consultants. News items can be sent to dkanicki@lesspub.com.

In that column, we looked at trends in industry consolidation and its effects on both larger and smaller dealerships.

In analyzing developments during the past year, it’s amply clear that the trend in dealer consolidation not only continues but also is materially altering the structure of farm equipment distribution in North America. It’s also clear that its implications are becoming more acute, particularly for smaller dealers that compete with the emerging multi-store dealer networks.

Shortline and specialty equipment manufacturers are also feeling the impact of consolidation. For competing products, distribution through large dealer groups is vulnerable to the consolidation and “purity” efforts of the multi-national full-liners. This has left some shortliners scrambling to find new distribution channels to service their customers.

In this column, we cover changes that have occurred among large farm equipment dealers during the past year. In the next part of this series, we’ll examine how expanding multi-store dealers structure their operations and develop their management talent.

As a starting point, we define “larger dealer groups” as those with 5 or more store locations. Without financials for every dealer, a good rule of thumb is $10 million revenue per store, although some dealers sell more than triple that figure. We estimate that these dealer groups account for over 20% of North American farm equipment dollar sales.

By brand, we estimate that these dealer networks account for nearly 50% of John Deere’s annual ag equipment sales in the U.S. and Canada. This compares with AGCO (primarily the Challenger brand) and Case IH, where their larger dealer groups make up around 30% of annual sales. The larger New Holland and Kubota dealer groups are yet to demonstrate the same impact, accounting for plus or minus 10% of annual sales.

There are at least 162 farm equipment dealers in North America with 5 or more store locations that sell and service farm equipment (Table 1). A year ago, our preliminary estimate was that there were 151 large dealer groups. With input from dealers, we’ve updated the table to reflect corrections and changes that have occurred in the past year. 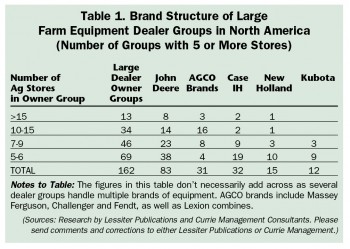 On the other hand, we also discovered that some dealers with different names were in fact owned jointly. For example, because the Romer family has substantial ownership in both Colorado Equipment (8 ag locations and 11 total stores) and James River Equipment (15 ag locations and 24 total stores), we count these as one large John Deere dealer group.

With these and other adjustments, we estimate that are 162 large North American dealer groups compared with 156 a year ago — nearly 5% more. Our research also shows that the number of stores that are part of a large ownership groups has increased by 7%. 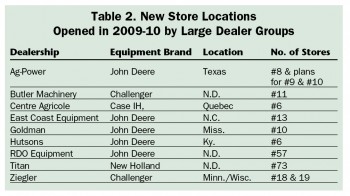 While it might be expected that the large dealer groups would close some stores they’ve acquired because their locations are not strategic to their overall expansion plans, in general this is not happening.

In fact, to better serve customers and increase market share, several large dealers have opened new locations. Those that have closed stores usually transfer their operations to a new and better location. A listing of new store openings — not transfers or mergers — is shown in Table 2.

The major brands of ag equipment are obviously on different schedules when it comes to dealer consolidation. Following are our observations on how each is moving forward in restructuring its dealer networks.

John Deere. There’s little doubt that Deere continues to set the pace when it comes to dealer consolidation, and there’s no sign this will be slowing anytime soon.

Additional mergers are being contemplated as part of the “Dealer of Tomorrow” initiative that promotes cooperation among neighboring dealers to achieve greater scale and better service. Single-location Deere dealers are becoming fewer. One dealer who contacted us recently said he is one of only 5 single-store Deere dealers left in Iowa.

Large Deere dealers continue to wrestle with profitability and market location for their consumer equipment stores. Some are adding stores, others are dropping locations or merging with other operations to find a profitable balance.

AGCO Corp. The recently announced move to drop the AGCO brand of equipment is seen as AGCO’s push toward consolidating its dealers.

Those dealers that carried the orange AGCO brand, many of whom previously handled Allis-Chalmers equipment, will need to evaluate the possibility of merging with dealers that handle Massey Ferguson equipment, which is another AGCO brand.

Meanwhile, AGCO appears to be getting tougher with Challenger dealers. In March, Challenger announced a new dealer in Georgia and Alabama to replace a previous farm equipment joint venture between two Caterpillar dealers. In Kansas, with the merger of two CAT dealers, the Challenger brand was not renewed and a large AGCO dealer, Lang Diesel, now handles Challenger in a large part of Kansas.

On the other hand, a Caterpillar dealer that is firmly committed to the ag equipment business is Ziegler Cat, of Minnesota and Iowa which has opened 2 new locations in the last year. Ziegler’s expansion included a second ag location in Wisconsin, where CAT construction equipment is the responsibility of another distributor who does not sell farm equipment.

Kubota Tractor. It appears Kubota continues to expand the number of single-location dealers or is piggybacking on consolidating dealers of other equipment brands.

Its biggest dealer and recent addition is Ahern Rentals, which is concentrated in the western region of the country but is opening locations across the country — not always with Kubota equipment.

Planning for Profits — Expanding Successfully: It’s All About Talent